With a month to go before the end of the year, Chicago Police Superintendent Garry McCarthy says the city's crime statistics show progress -- but not success.

McCarthy says the figures are trending positively, and the city is at a 49-year low for murders.

The superintendent also credits his detectives with solving more crimes, turning in the best clearance rate for cases in nine years.

What's more he says there have been fewer complaints from the community against officers -- down 17 percent in the last two years. 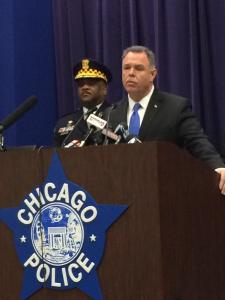 That said, McCarthy admits November has been a tougher month, with 10 more murders this year than November of last year -- and shootings are up compared to last year, but still at historic lows.

And, as more protests regarding the police-involved shooting death of Michael Brown are scheduled in Chicago, McCarthy also discusses how events in Ferguson, Mo. have influenced his policing strategy.

One way he’s taken a look at what's happened in Ferguson and adjusted his own strategy is to require that his district commanders have phone trees with community leaders.

So, if there's a major event -- like a police-involved shooting, or other serious incident -- those commanders are immediately in touch with community leaders to share facts, rather than allowing rumors to spread.

McCarthy says because of a couple of police-involved shootings post-Ferguson, he learned that his department needed to be able to share accurate information faster -- since Ferguson is something that's resonated with the public, and been on his mind just as much. 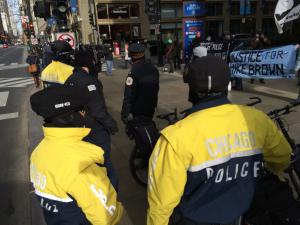 In the last few weeks, there have been several Ferguson-related protests. McCarthy says out of the 15 to 20 protests his department has policed recently, they've only had three arrests.

We've seen heavy police presence at protests on the Magnificent Mile on Friday, and again in the Loop today.

Today's event was part of a nationwide Hands Up Walk Out event where students across the country walked out and protested, what they call justice for Mike Brown.

At this one in the Loop today, a handful of protesters demanded an end to what they call police murder. Today’s nationwide protests fall on the 59th anniversary of the day civil rights icon Rosa Parks was arrested for refusing to give up her seat on a Montgomery bus.