Starting Up in Chicago Neighborhoods 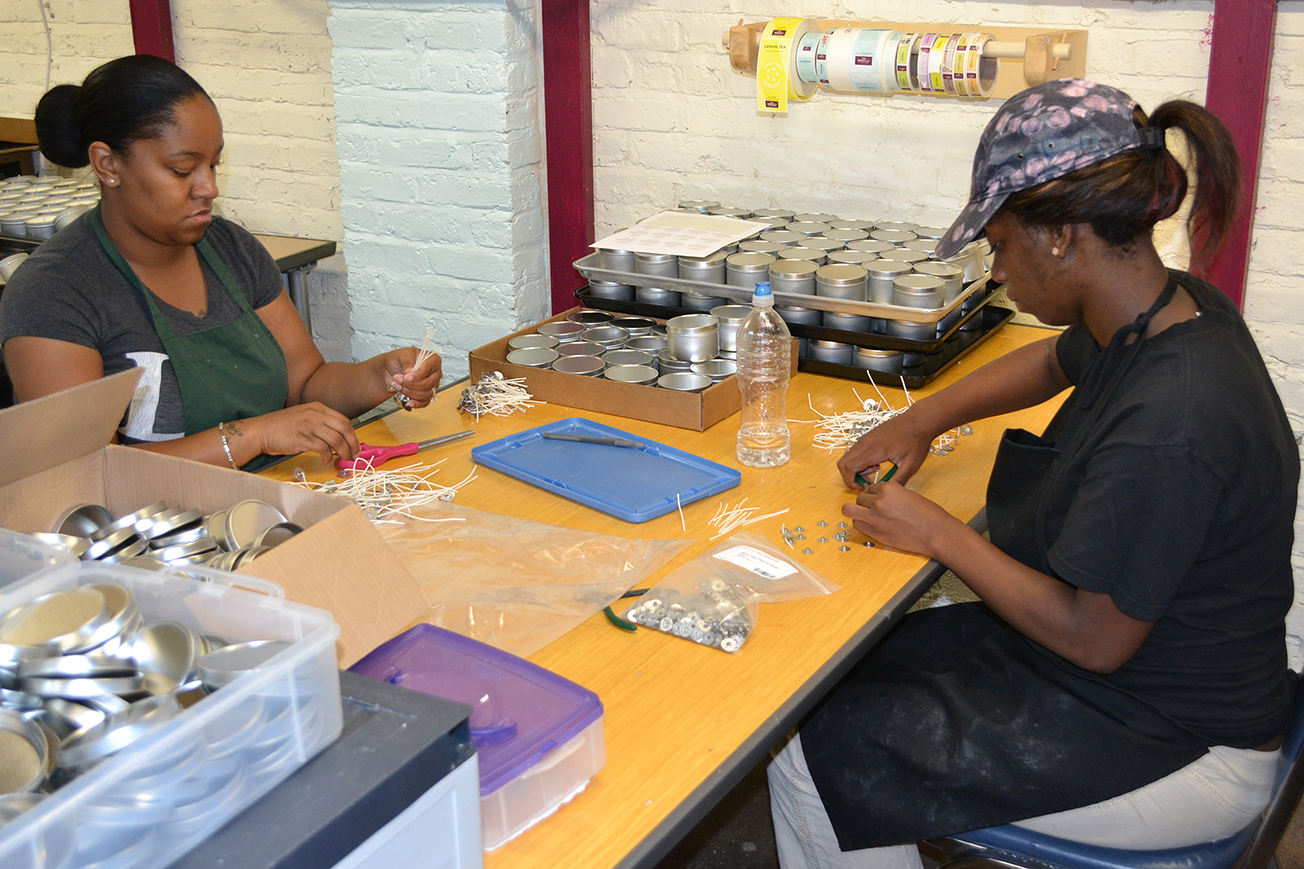 At this workspace in the West Garfield Park neighborhood, young women are "chipping away" to make new candles and brighter futures.

The job here at Bright Endeavors, helped 22-year-old Jasmine Stewart rent her own apartment for herself and her 5-year-old son.

"Was it having this job that helped you be able to afford own place?" Chicago Tonight’s Brandis Friedman asked.

Stewart is a graduate of this 13-week job training program that the non-profit offers to adolescent mothers, who are either homeless or at-risk of being homeless.

Upon completing the program, many go on to entry-level jobs in other fields—but Stewart got a job right at Bright Endeavors as a production assistant. It also gave her a new outlook on her behavior.

“[It taught me] maturity [and] responsibility,” Stewart said. “I had those characteristics before, but it taught me more the importance of it.”

She hopes to return to the nursing field as an assistant, but for now she's in charge of helping run the workspace where other young moms make soy candles that are sold to support the non-profit. 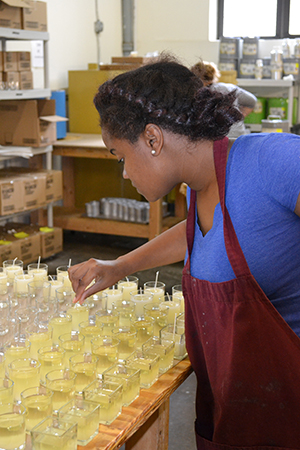 “[It’s] really a transitional job here at Bright Endeavors which gives them some experience working in a coached supportive environment, and then they work with an employment specialist that whole time who will coach them and help eventually place them in a permanent job.” Bright Endeavors CEO Laura Zumdahl said.

Zumdahl explains the organization is starting up a new venture—Good Glass.

“We would fill votives, let a catering company use them for the night and then reclaim them, clean them, refill them,” she said. “It’s cheaper for them, and it also has no environmental impact because there’s no waste. And so we realized this is a huge need and something we were well equipped to fill.”

But to scale up that business, Good Glass needs an industrial dishwasher to clean the old votives, plus votive racks and a supply of glass votives to get started.

To raise the capital, the group used an online platform called Seed Chicago, a Kickstarter fundraising page run by the non-profit, Accion Chicago.

Seed Chicago started under Mayor Emanuel’s plan for economic growth and jobs. The idea is to boost new and existing small business and community development projects in Chicago neighborhoods.

For Good Glass, donors gave almost twice as much as the $3,500 goal.

“I think it tells us that there's energy and excitement in the community about solutions to poverty that work,” Zumdahl said. “There are people in community who believe that there’s something that’s working well, and you can help really transform a life and create a pathway out of poverty with a program like Bright Endeavors and Good Glass Chicago. This is an idea that makes business sense but also pays off in real dividends in human lives.” 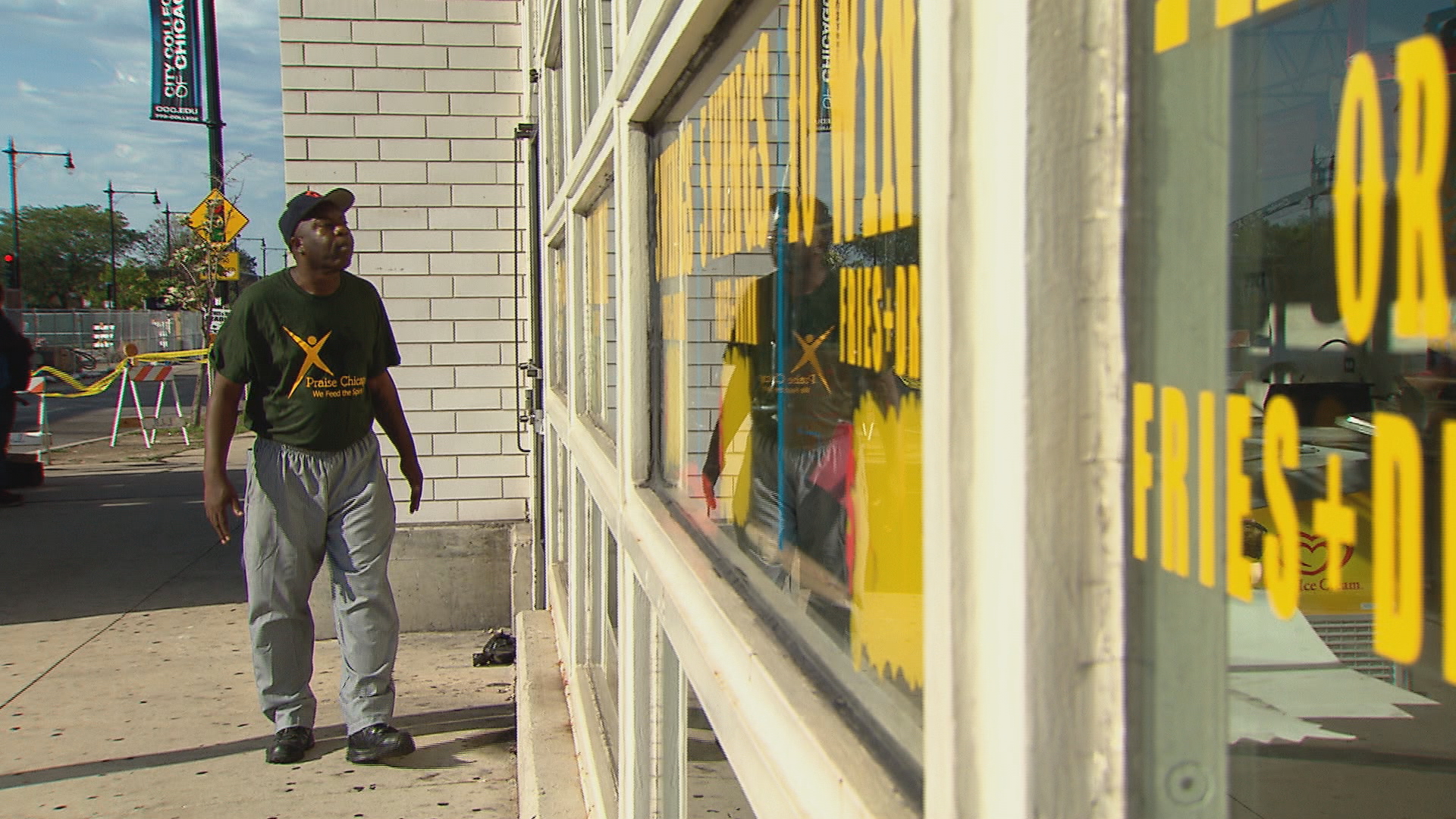 Darryl Fuery is hoping that his restaurant in Englewood, near Kennedy-King College will be as successful.

In addition to serving breakfast and lunch, he hopes to provide jobs and training to students interested in the culinary field.

“Growing up in Englewood, I noticed there weren't a lot of options for food, as well as [options] for young students or people who want to work in workforce,” Fuery said.

Brereton explains Seed Chicago is designed to give businesses the boost they need to be successful.

“The statistics are that a third of businesses fail within the first two years,” Brereton said. “And a lot of times those businesses fail because they're undercapitalized, or the complexity of business grows much quicker than owner can manage.”

So, participants also receive coaching from experts in their field as well as a cohort of other entrepreneurs so they can support each other.

Brereton says in the last round of projects, 75 percent were fully funded.

“For a small business or a charity, it's difficult to raise awareness. So this is a means to both raise awareness and raise resources,” Brereton said. “Part of this is testing the idea and if you're unable to raise $3,000 from your friends and family and the people that are potential customers for the business, then that probably doesn't bode well for the long-term.”

Other successful projects have included a business that makes microfiber pocket squares and an urban farm called Growing Home in Englewood.

Crain's columnist Joe Cahill explains, while the tech industry is one of few currently booming in Chicago—those businesses don't venture beyond the city's central neighborhoods.

“You'd like to see the whole city participating in rise of new industry, and get benefits that come from that,” Cahill said.

While the majority of new businesses fail, he says a program like Seed Chicago can help boost the odds that some might succeed in the neighborhoods that need them.

And Seed Chicago's participants are hoping to be among them.