A Highland Park teenager recently received a $36,000 award for his scientific research that led him to create GreenShields, an attachment placed on the roof of a school bus to make it more aerodynamic and thus fuel-efficient. But this isn't the first time this young scientist has received a grant to further this idea. Brandis Friedman has his story. 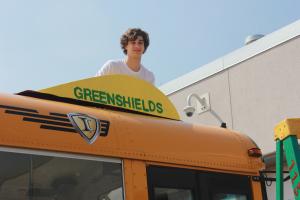 When Jonny Cohen was a young child, his mother would find him taking apart gadgets around the house, inventing new devices, blowing things up, or solving countless puzzles.

“Basically, nothing was safe in my house,” said Cohen, now a sophomore at Columbia University.

At first, he seemed like just another curious kid, but Cohen’s inventive and innovative nature has led him to develop a device that can save schools money and reduce carbon emissions. He calls his invention GreenShields. It can be installed on any school bus to make it more aerodynamic and 10 percent more fuel-efficient.

“I think that repairing the world and being environmentally conscious is very important,” said Cohen, who lives in Highland Park. “Because we only have one world, if we mess it up we don’t have another one to go to.”

In 2008, the GreenShields Project began with the help of his older sister, Azza Cohen, when she introduced him to her honors and AP physics teacher at Highland Park High School, Kunal Pujara.

“When I first heard Jonny’s idea, it was totally surprising,” Pujara said. “Jonny, by far in my 20 years of teaching, is the most innovative student I’ve had.”

Over the years, Cohen and his team have won multiple awards to help fund their efforts. First, Cohen won a $1,000 grant from Ashoka Youth Venture to get his project off the ground. Then in 2010, the team won a $25,000 award from the Pepsi Refresh Project to further research and development.

This year, Cohen is receiving a $36,000 award from the Diller Teen Tikkun Olam Awards for both his research and education. Cohen and his mother, Jakee Cohen, both expressed their gratitude toward the Helen Diller Family Foundation.

“We are all so delighted that Jonny received the Diller Award; it is an honor to our whole family,” Jakee Cohen said. “The idea of the award, ‘Repairing the World,’ is special, and I think Jonny’s GreenShield Project represents that.”

Cohen was 12 years old and taking summer classes on aerodynamics at Northwestern University when he first came up with the idea. Now 19, it has taken him years to perfect and implement his product. It hasn’t been easy. There have been many challenges, but Cohen is finally seeing success from all his hard work. 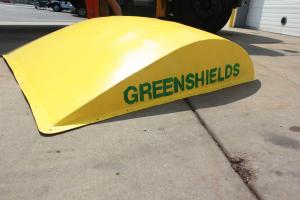 A GreenShield is already in use on a bus in the Bay County School District in Florida, and data suggests positive results.

The greatest challenge was getting GreenShields on buses in Illinois because of the strict safety regulations in place. But last week, the Illinois Department of Transportation approved the use of GreenShields on the buses in Cohen’s former School District 113. The district will start testing the device as soon as Cohen and his team can manufacture a shield.

“I’m really excited, and I’ve been waiting a long time to hear that,” Cohen said. “I’m looking forward to giving a GreenShield to my high school.”

Though expansion can be a slow process, the team is optimistic about the future of GreenShields. Cohen hopes to expand to other school districts and other areas in the nation, and even one day around the world.

“I think it is amazing how this one small idea can affect the entire world,” Pujara said. “Tikkun Olam is the Jewish phrase for repairing the world, and I think Jonny and his entire family do that on a daily basis.”