Last month, Gov. Pat Quinn signed legislation that would phase microbeads out of personal care products, like body wash and facial scrub. Lawmakers worked with environmental advocates as well as manufacturers of such products to create the legislation--thus, leading to some compromises in the bill. Brandis Friedman explains the impact of those microbeads on our water systems and when the law goes into effect.

Learn more about microbeads and their impact. 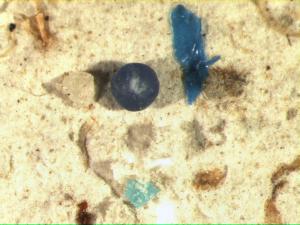 Q: What are microbeads?

Microbeads are small, round, plastic, non-biodegradable pieces, that are less than 5 mm in size. Microbeads are commonly used in many cosmetics and consumer products like hand soaps, face washes, and toothpastes. Patented for personal care products in the 1990s, the round beads are commonly used for exfoliation. If a product contains microbeads, the ingredient list will include polyethylene or polypropylene.

Q: How do microbeads make it into the waterways?

When people use products containing microbeads, like a face wash, the beads go down the drain and travel through the water pipes (along with wastewater, of course) to water treatment facilities. Wastewater goes through several steps in the treatment process (see Down the Drain model) before being discharged out to the Sanitary and Ship Canal, which carries treated sewage to the Des Plaines River. The problem is that the microbeads aren’t caught in the treatment process. They’re too small to be gathered in filters. During the biological treatment process, small microorganisms feed on the organic material that flows through the tanks at the water plant. However, the microorganisms do not eat the small plastic beads because they’re not organic. In the final settling tanks, the clean water, including the beads, float on top and microorganisms settle in the bottom of the tanks. The treated water is eventually discharged from the facility into the canal, and tributaries of the Mississippi River, microbeads and all. 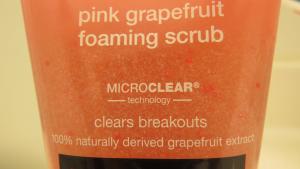 Q: Why is this being brought up now if microbeads have been around since the ‘90s?

In-depth research has brought more attention to the effects microbeads have on the environment. The research started two years ago from SUNY (State University of New York) College at Fredonia. The goal was to measure the quantity of the beads in the Great Lakes. Researchers found somewhere between 1,500 and 1.1 million plastic microbeads per square mile. Now, there is more and more research being done throughout the country. A professor at Loyola University Chicago, Timothy Hoellein has been sampling waters from rivers in and around Chicago, as well as Lake Michigan. The team has found synthetic microbeads, but are still researching how much might exist and where it comes from. Hoellein says his research leads him to believe that the rivers and streams are funneling the microbeads into larger bodies, like lakes.

Q: Why are microbeads bad for the environment?

Researchers have found that microbeads could build up in our waterways. Hoellein is researching how microbeads may carry diseases and chemicals, infecting not only our water, but also the creatures living in it. Since microbeads float on the top of the surface, fish can easily mistake them for food and eat the plastic (along with any microbes living on the plastic). Depending on the species, some fish can easily excrete the plastic, and some cannot. No long-term research has been done to see if people are eating the affected fish. 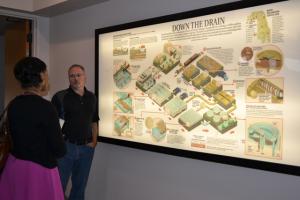 Q: What does Illinois’ law banning microbeads call for?

Illinois is taking the lead through a new bill and will be the first in the world to ban microbeads. In June, Gov. Pat Quinn signed Senate Bill 2727, a new law that will ban manufacturing of microbeads by the end of 2018, and the sale of products containing microbeads by 2019. However, over-the-counter drugs like acne washes will have an extra year to comply with the new ruling.

Q: Why is Illinois the first state to ban microbeads? 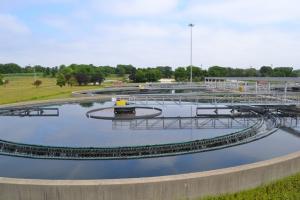 Q: How will other states be affected?

New York, California, and Ohio have bills currently working their way into legislation. Additionally, Minnesota has passed legislation to study the impact of microbeads. And since major manufacturers make products for the entire country, other states will begin to notice the change on their store shelves as well whether or not they've passed their own ban.

Q: What will manufacturers use instead of microbeads?

There are many natural and biodegradable alternatives to microbeads like, grounded nutshells or cocoa beans, sand, apricot seeds, sugar, oatmeal, and salt crystals. Major companies like Colgate-Palmolive, L’Oréal, Johnson & Johnson and Proctor & Gamble have already pledged to replace microbeads with more natural products.