He is the first and, so far, only individual to be cured of HIV. In 2008, Timothy Ray Brown made international headlines as The Berlin Patient when he received a stem cell transplant that eradicated the virus that causes AIDS from his body. We’ll hear from Brown, John Peller, the CEO/interim president of the AIDS Foundation of Chicago, and Dr. Richard T. D’Aquila of Northwestern University Feinberg School of Medicine on the progress being made in combatting HIV. Brown will also be speaking at "Curing HIV - Only a Start," Wednesday, April 23 at the Chicago Cultural Center.

Read an interview with Brown. 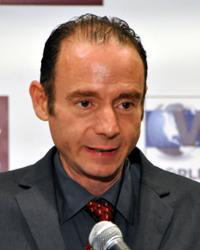 How did you feel when you found out you were diagnosed with HIV?

Did the blood cells for the bone marrow transplant have to come from someone immune to HIV?

It had to come from someone who had a tissue match. It’s more than just the same blood type. In the end, we looked for a donor who was immune or highly resistant to HIV. The HIV virus could not enter into his cells.

Did you think this transplant would cure you of HIV?

It was a hope. They weren’t really sure if it would happen the way it did. It turned out to be a good thing for me.

What were you thinking when you found out you no longer had HIV?

I was ecstatic. I quit taking my HIV medication the day of the transplant and haven’t taken any since. I was told six months later that they didn’t find any HIV in my blood, so I guess they knew after three months. And I didn’t really accept that I was HIV free until after it was published. It was hard to get through my head that was the case.

Are there concerns that the virus will return?

No. I’ve been told that I won’t probably ever have HIV again, and that I’m probably immune to it.

So how is your health now?

It’s good. I’m spending most of my time in Las Vegas. The climate is good for me and that’s good for my health. I go to the gym three to four times a week. I rarely get colds or any kind of sickness and my mobility is returning quite well.