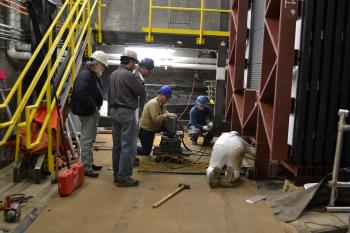 One of the ironies of modern science is that increasingly bigger experiments are required to better understand the smallest of particles. That's the case with a new machine at Fermilab in far west suburban Batavia. Physicists there have just completed installing one of the largest particle detectors in the world, and it's working in conjunction with another detector 500 miles away to try to unlock the mysteries of the neutrino.

Weighing in at nearly 13 tons, it took scientists and technicians at Fermilab more than a little effort to get a massive block into place. They had to make adjustments, realignments, and do a bit of finagling to get it in the right spot.

But when they eventually got it there, they completed a machine containing six other equally gigantic blocks. All together, they form a particle detector that soon will try to unravel one of the great mysteries of the universe.

“Right now, as far as we know, our universe is completely made of matter,” said Fermilab Physicist Bill Lee. “We don't see any evidence of having large amounts of antimatter that should have been made in the Big Bang. We think that there must be some mechanism that there's a propensity for having matter, and we're wondering if that can be the neutrino.” 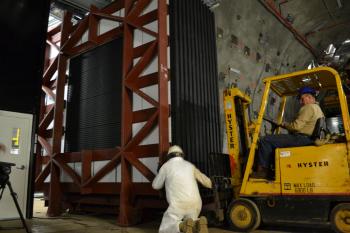 Neutrinos are one of the least understood of subatomic particles. They're generated by the nuclear reaction of stars -- including the sun -- and are billions of times more abundant in the universe than all other particles. Trillions of them pass through your body every second, and they're the only known particle that can change into several different forms; something scientists call oscillation.

“None of the other fundamental particles, electrons, quarks, they don't oscillate from one type to another,” said Lee. “Neutrinos do, and that makes them very interesting to study.”

They are also very difficult to capture, and that's why the detectors need to be enormous. Because of their size and complexity, the massive blocks that make up Fermilab's neutrino detector had to be constructed above ground. They were then lowered through a 350-foot deep shaft specially constructed for the project before being assembled in their custom cavern.

The detector requires a subterranean shelter to minimize interactions with naturally occurring neutrinos. For their study, Fermilab scientists will generate a neutrino beam using its main injector particle accelerator, and that beam will have two targets: the Fermilab detector, and one 500 miles to the northwest in Northern Minnesota. 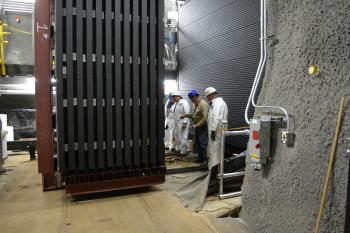 “We're looking for an appearance, and so we have to know what the state of the beam is here, so that's why we want to have a near detector,” said Lee. “And then, we need the distance for those neutrinos to have the chance to oscillate, and so that's why we put a detector all the way in Minnesota.”

The far detector near the Canadian border is also sizeable. Fermilab claims that it's the largest freestanding plastic structure in the world, measuring as wide as a basketball court and twice as long. The neutrino beam that hits it will travel unabated through the earth. At the very basic level, scientists hope to discover the exact mass of each of the three so-called flavors of neutrinos. But there's a much, much bigger question that the neutrino experiment could answer.

Neutrinos should not be confused with the Higgs boson particle. The Higgs was first proposed in the early 1960s and confirmed to exist only two years ago after experiments at the Large Hadron Collider in Switzerland. Neutrinos have been known about since the 1930s.

Both particles, however, hold the keys to big mysteries. Fermilab scientists hope to start unraveling some of those mysteries later this year.