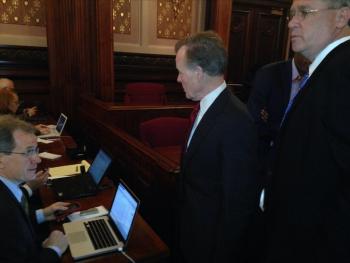 Known for holding their rank and file members’ feet to the fire, Illinois legislative leaders were on the hot seat early Tuesday morning.

Notably, State Senate President John Cullerton was absent. He couldn't attend, according to lawmakers, because he is busy behind the scenes working to get the final votes on the pension reform bill. His office has acknowledged it will be an uphill battle, given his chamber's past support of a more union-friendly bill.

"This is a well-thought out balanced response to the problem," said Madigan this morning. "The Illinois pension systems are too rich to be afforded as the state goes forward."

The compromise the leaders struck purports to get the state's severely underfunded pension system to full funding in 30 years and saves $160 billion, according to a draft proposal of the bill.

The savings come largely from higher retirement ages, and a reduction in annual cost of living raises that retirees get that are currently compounded at 3 percent every year. The new "COLA" would be based on a formula that limits raises for the highest earners and/or employees who have worked for the shortest time, and would maintain a more generous raise for lower earners.

Madigan made a point in refusing to refer to the current yearly raises as "COLAs," instead referring to them as "adjustments."

"It bears no resemblance to the actual cost of living,” he said.

Following the leaders' testimony, a litany of stakeholders, including representatives from business and labor, made their case before the committee.

Today's meeting takes place amid an anxious atmosphere at the Capitol, where lawmakers are furiously being lobbied, and many are questioning the merits of the pension bill. Some lawmakers privately worry that the actual savings in the bill don't add up.

Regardless, Radogno underscored the importance of today's vote.

"If we don't take action today, we are facing yet another bond downgrade,” she said.

Both the House and Senate are expected to take up the pension reform measure later today.