Chicago Sun-Times Theater Critic Hedy Weiss joins us to review shows currently on Chicago area stages, including Other People’s Money by Shattered Globe Theatre at Theater Wit, The Mountaintop at Court Theatre, and In the Heights at The Paramount Theatre. For our online audience, Weiss will also review A Raisin in the Sun at TimeLine Theatre. Learn more about the plays, and watch Hedy's web extra video review. 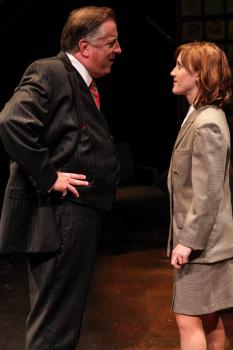 Written by American businessman-turned-playwright Jerry Sterner, Shattered Globe Theatre’s production of Other People’s Money explores the deceptive world of business through a story about New England Wire and Cable, a small company that faces a hostile takeover by a ruthless businessman. Directed by Dennis Zacek, the Artistic Director Emeritus of Victory Gardens Theatre, this romantic comedy/drama about the universal struggle against the misuse of power kicks off the 22nd season at Shattered Globe Theatre. Chicago Sun-Times theater critic Hedy Weiss calls Sterner’s story a “lip-smackingly good play from 1989 that brilliantly chronicles the monumental changes set in motion during the Reagan years,” and says Shattered Globe Theater’s production “hits one bull’s-eye after another.” The show, which runs for 2 hours and 15 minutes and includes one intermission, will be performed through October 19 at Theater Wit. General admission tickets cost $30. For more information, click here. 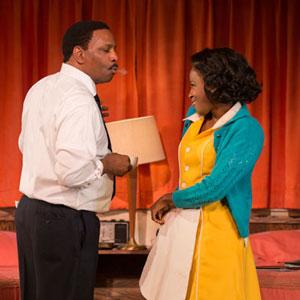 Winner of the Laurence Olivier Award for Best New Play, The Mountaintop at Court Theatre takes place in Dr. Martin Luther King Jr.’s hotel room the night before his assassination. During the play, King -- played by David Allen Anderson, the 2013 recipient of the Ten Chimneys Foundation’s Lunt-Fontanne Fellowship -- strikes up an unlikely conversation with a young hotel maid as he tries to work on his speech. The imaginative new portrayal of Dr. King, which was written by Katori Hall, is directed by Resident Artist Ron OJ Parson, co-founder and former artistic director of The Onyx Theatre Ensemble of Chicago. Describing the fictional portrayal of the last night of Dr. King’s life, Hedy Weiss says, “The crucial thing to remember here is that The Mountaintop is no documentary. Rather, it is a full-blown (and sharply feminist-oriented) fantasia. It can be heavy-handed, but it also can be greatly entertaining.” The 90-minute show runs through October 13, and tickets cost between $45 and $65. For more information, click here. 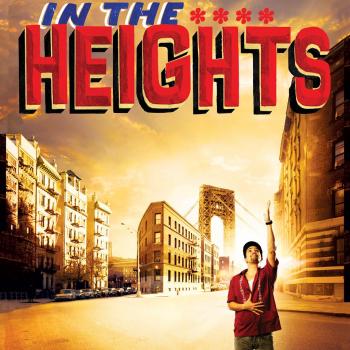 Making its Chicago debut at the Paramount Theatre in Aurora, In the Heights presents three days in the lives of residents living on 183rd Street in New York’s Washington Heights. The contemporary musical, which was a hit on Broadway, took home Tony Awards for Best Musical, Best Score, Best Choreography and Best Orchestration in 2008. Directed by Rachel Rockwell, who was named “2012 Chicagoan of the Year in Theatre” by the Chicago Tribune, Paramount Theatre’s production includes “soaring ballads and powerful Latin-inspired grooves.” Chicago Tribune Theater Critic Chris Jones says Rockwell “has found some remarkable — truly remarkable — young talent, deftly balanced between singers and dancers.” Describing the play, Jones says, “The main character in the 2008 Broadway musical In the Heights is not a person at all — it's the neighborhood, mostly Dominican-American, that sits atop Manhattan in the shadow of the George Washington Bridge.” The production runs through October 6, and tickets cost between $36.90 and $49.90. For more information, click here.

Hedy Weiss reviews A Raisin in the Sun in the following web extra video review: 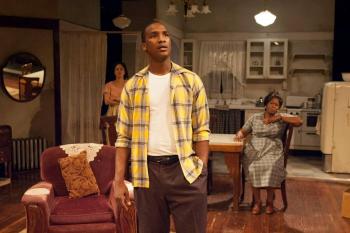 A Raisin in the Sun

TimeLine Theatre Company begins their new season with a powerful story by Lorraine Hansberry about an African American family living in a crowded apartment on Chicago’s South Side during the 1950s. During the play, the family is challenged when their plan to buy a new home is thwarted by racial intolerance. The mission of TimeLine Theatre Company is to present stories inspired by history that connect with today's social and political issues, and according to TimeLine Artistic Director PJ Powers, “Though written more than 50 years ago, A Raisin in the Sun—arguably the greatest play set in Chicago—has as much to say about our city now as it did in the 1950s.”  Family matriarch Lena Younger is played by Jeff Award-winning actress Greta Oglesby. Describing Oglesby’s TimeLine debut in a review for Chicago Theater Beat, Lawrence Bommer says, “A powerhouse in any play, Greta Oglesby is an almost Biblical Lena, a right but never righteous tower of strength who pours out love for everything from her children to the scrawny little plant that will follow her to ‘freedom.’” In a positive review of the production, Time Out Chicago Theater Critic Kris Vire says, “Ron OJ Parson's expertly staged, ideally cast revival of Lorraine Hansberry's American classic arrives at a moment that proves the play can still surprise.” A Raisin in the Sun runs for 2 hours and 50 minutes and has one intermission. Tickets for the show, which will be performed through November 17, cost between $35 and $45. For more information, click here.