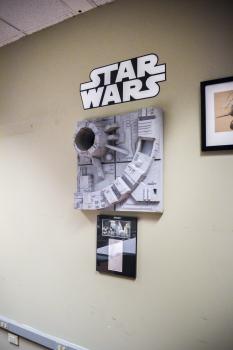 Thirty-six years ago this weekend, Star Wars exploded onto the screen and made cinematic history. The blockbuster film began what would become a multi-billion dollar empire for George Lucas, and spawned companies like Industrial Light & Magic, and Pixar. And, one of the movie's pivotal scenes had help from a Chicago institution.

When the original Star Wars released, the sci-fi space odyssey used innovative in-camera techniques for most of its groundbreaking special effects. But, for at least one particular scene, George Lucas required a cutting edge 3-D computer animation never before seen on film.

That 3-D computer animation was to be used in the film as part of a military briefing, engineering a plan of attack against the evil Empire's planet-destroying Death Star.

The animation itself required a 3-D computer rendering of the Death Star and the trench through which X-Wing fighters would travel to ultimately exploit its weakness.

But in 1976, 3-D computer animation was in its infancy and few could do it.

So, Lucas turned to 27-year-old Larry Cuba, a research associate at the University of Illinois at Chicago. Cuba was working with cutting-edge computer animations at the Circle Graphics Habitat -- now known as the Electronic Visualization Laboratory, or EVL.

“Computer graphics was advanced enough back then to even show shaded models,” said EVL Director Jason Leigh. “But, in looking at, what we were able to provide back then for computer graphics, George said, ‘Actually we want to take it a step back’ because the general public wasn't fully aware of what computer graphics was yet, so he wanted a more iconic image of computer graphics as opposed to a polished version of it. So, what you saw in the film was actually three generations back of software that we had already developed."

Steve Heminover was a student at the lab back in the mid-1970s, and today is a specialist in laser graphics. For the last 20 years, he's been behind the laser shows for both the Bulls and the Blackhawks.

“The computing horsepower we had back then was so tiny. What all of us have on our cell phone far exceeds, by several orders of magnitude, what we had,” said Heminover.

What they had was a system that included a Vector General computer hooked up to a CRT monitor.  Heminover says computers today run about a half million times faster than they did back in the ‘70s. 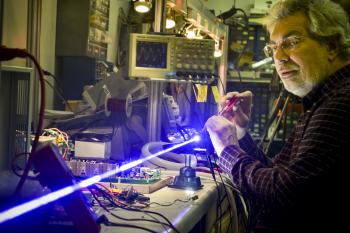 “As you can see, the Vector General is capable of moving images,” said DeFanti.

“A lot of what Larry did was give them photographs, because a lot of the set pieces weren't actually built yet. They had line drawings or they had photographs of things they were going to do, or they had architectural drawings of what they were going to build,” said Heminover. “And he sat down with these photographs, and he measured them, and then we put them on a digitizing tablet, and actually traced over the actual photograph, and he had to assume what the third dimension was. Or sometimes we had side shots. But some of these were set pieces that were built, some of them weren't built.”

Watch a behind the scenes "making of Star Wars computer graphics" video from Larry Cuba:

One original Death Star set piece that was built for the trench sequence hangs on the wall in the lab at UIC today.

“So, in this shot, from the original Star Wars, you can see four copies of our piece of the Death Star, making up the surface of the Death Star, flying across it during the film,” said Andrew Johnson, Associate Professor of Computer Science at UIC and member of the EVL.

“At the time when we received it, of course, it really wasn't worth anything because no one knew that George Lucas was going to be that famous, and you know after the special effects were done they left it behind, and they promptly left and they forgot all about it,” said Leigh. “It has been here for over 30 years.” 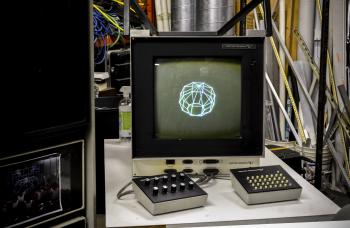 Another piece of cinematic history that stayed in Chicago is the actual Vector General computer that was used to produce the Death Star animation.  For over 25 years, Heminover has kept it housed in his South Side workshop.

The disk pack actually holds the Death Star plans from the 1970s.  It holds about 2.5 megabytes of data which was a lot for back then. Heminover said a lot of special effects for movies were done on those computers.

“We did effects for several movies. Some science fiction, some regular, and a lot of the times the movies didn't go anywhere,” he said. “And then the Star Wars script came in and we looked at it, and ‘OK, this could just be another one,’ and Larry Cuba went and did all the work, and all of a sudden bam! We had a blockbuster on our hands.”

And, the lab that was responsible for creating one of the most pivotal Star Wars special effects ever, continues to inspire computer scientists today.

“What I did was, you just put a palm, a big touch, a palm on the screen, and then this menu pops up, and I can press and drag, and bring ships into the battle,” said UIC graduate student Arthur Nishimoto. 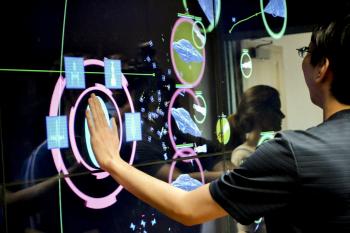 Nishimoto developed a touch screen strategy game called Fleet Commander, using ships and sound effects from one of his favorite sci-fi franchises: Star Wars. He even got an invite to visit Lucasfilm in California.

“We posted a video of it online, and within a week, it was getting upwards of 700,000 hits on YouTube,” said Nishimoto. “And, as a matter of fact, the following day, I had received two separate e-mails from guys: one from Lucasfilm that had seen the video and basically was like, ‘Hey, could we talk?’”

And so, as the next generation of Star Wars fans prepares for another trilogy, the origins of some of its most significant scientific breakthroughs remain tied to a little lab in Chicago.

In the following web extra video, Andrew Johnson explains how the original Death Star plans that were the crux of the plot in the film don’t look like the actual Death Star:

The photo below reflects the two versions of the Death Star. Note the placement of the emitter dish.