We look into the huge appeal behind the Thorne Miniature Rooms, and discover what's new this holiday season on Chicago Tonight at 7:00 pm. View a photo gallery of rooms at The Art Institute and rooms created by Kupjack studios.

In the following web extra video, Art Institute curator Lindsay Mican Morgan tells us her theory on why the Thorne Rooms have remained so popular.

These elaborately decorated miniature rooms give one a glimpse inside European and American interiors ranging from the late 13th century to the 1930s. The 68 rooms 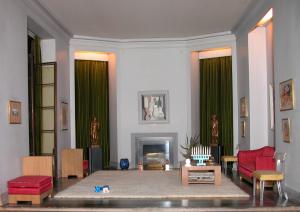 were painstakingly constructed on a scale of one-inch to one-foot. Envisioned by Mrs. James Ward Thorne and constructed by master craftsmen, the Thorne Rooms were completed between 1932 and 1940.

Nine of the rooms now don festive holiday décor offering a window into seasonal festivities of the past. An elegant English Drawing Room of the Victorian period boasts the only Christmas tree among the rooms, complete with trimmings. While a modern-era California Hallway has a menorah and box with a dreidel. The rooms were installed at The Art Institute in 1954 after being donated to the museum by Mrs. Ward Thorne in 1941.

But The Art Institute isn’t the only place in town where one can discover these tiny gems. In a studio just outside of Chicago, Hank and Ray Kupjack are crafting these delicate rooms as well. They’re following in the footsteps of their father, Eugene Kupjack, who assisted Mrs. Ward Thorne in creating the rooms. The brothers design and build rooms of their own that they often sell to museums or very serious collectors, considering the price of a room can run up to a couple hundred thousand dollars. 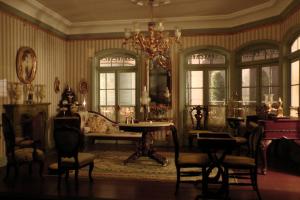 Their work can be seen in various museums throughout the U.S. and even as far away as Turkey, where their work exhibited in 2009. The Kupjack brothers are tentatively aiming for an exhibition next spring, which would comprise 72 miniature rooms—the largest collection of miniatures ever assembled. The majority of rooms would come from Hank and Ray with the remainder comprised of museum and private individual collections, and the event would benefit the Chicago Coalition for the Homeless.

The Thorne Rooms at The Art Institute are a permanent collection but the holiday adornments are only up through January 6, 2013.

Artisan Hank Kupchak details how his father began his working relationship with Narcissa Thorne in the 1930s in the web extra video below.

Watch a web-extra video behind the scenes of the Thorne rooms in 2002.