Diane Lane stars in Tennessee Williams' play, Sweet Bird of Youth. Hedy Weiss reviews this, and three more shows on Chicago stages on Chicago Tonight at 7:00 pm. Read more about the plays below and view a photo gallery. 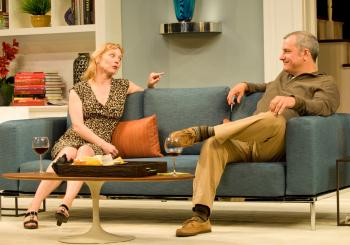 Good People
Set in Boston, the story centers around Margie Walsh, a woman who reexamines her life after losing her job and reuniting with an old boyfriend, Mike. As Margie tries to persuade her old flame to hire her, she realizes a powerful secret from Mike’s past. Written by Pulitzer-Prize winner David Lindsay-Abaire, Good People examines the consequences of choosing to hold on to the past or let it go. The show opened on Broadway last year in a production by the Manhattan Theater Club. Mr. Lindsay-Abaire received a Tony Award nomination for best play, and actress Frances McDormand won a Tony for playing Margie. The show runs through November 11 and tickets range from $61-$86. 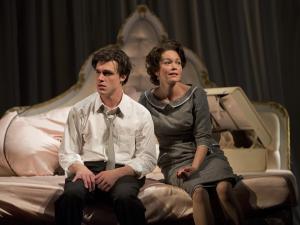 Sweet Bird of Youth
Academy Award nominee Diane Lane and Broadway’s Finn Wittrock (Death of a Salesman) star in Tennessee Williams’ classic play, Sweet Bird of Youth. A Hollywood legend (Lane) fleeing the disastrous premiere of her latest epic and a young actor-turned-gigolo trying to reclaim his former glory become an improbable couple. The two are forced to face their crumbling dreams in this seductive tale that’s sure to captivate the audience. The play runs through October 28 and tickets range from $35-$93. 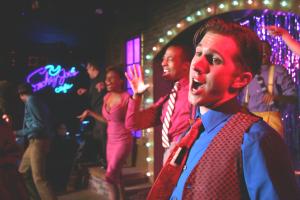 Smokey Joe’s Café: The Songs of Leiber And Stoller
Enjoy your favorite oldies performed by Smokey Joe and a cast of 9, as they perform 39 pop classics from rock-and-roll to rhythm and blues. The songs of American songwriting and record-producing partners, Jerry Leiber and Mike Stoller, won the soundtrack a Grammy in 1996. The songs are presented by different members of the cast in various combinations with no dialogue. From “Yakety Yak” to “Love Potion #9” to “Stand By Me,” this musical revue will take you on a trip down memory lane. The show runs through November 11, showing Thursday-Sunday evenings at the Theo Ubique Cabaret Theatre. General admission is $34, and dinner and show tickets are $59. 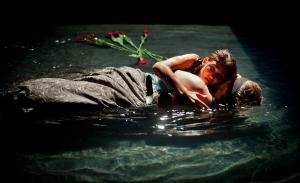 Metamorphoses
Winner of the 2002 Tony Award for Best Direction of a Play, Metamorphoses was written and directed by ensemble member Mary Zimmerman. Based on the myths of Ovid which described the history of the world from its creation, Metamorphoses is filled with beautiful imagery and provocative moments. While the language of the myths is poetic, Zimmerman uses humor to make the play easy to relate to in the world today. A main theme of the play is change, a concept which is represented by the pool that takes on varying functions throughout the play. The play runs through November 18 and tickets range from $36-$70. Please note that Metamorphoses includes a scene which contains male nudity.