Scientists from The Field Museum join us on Chicago Tonight at 7:00 pm to talk about a new "extreme" exhibit that opens on Friday. 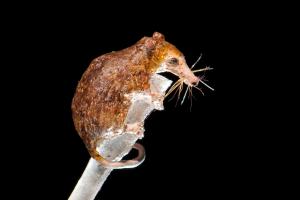 Can you talk about the specimens on display, in terms of the range of sizes and time periods they existed?

The exhibit covers the entire time period during which mammals existed, from 230 million years ago to today. We’ve also got the smallest mammal known to have existed (the Batodonoides, a small shrew-like species) to the largest land mammal (the Indricotherium, similar to today’s rhinoceros) on display.

How long did the exhibit take to put together?

We have a lot of experience doing these temporary exhibits. There’s a great team in place, one that numbered well over 100 over the course of project. It took us three years from start to finish. The specimens are primarily from the American Museum of Natural History’s collection, though we did borrow some from other museums and private collections. The specimens represent much of the world. It’s sort of global in scope.

Was it difficult to assemble everything? What was involved?

One of the reasons we do these shows is that we have an amazing collection of more than 32 million specimens at the American Museum of Natural History alone, when you include cultural and natural history items as well. We know the field, that’s why you have curators. You try to understand the interesting topics, look for interesting specimens, and then try to borrow the specimens, if possible, or make casts. 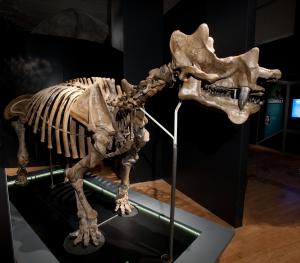 Are there any specimens you brought in from outside the museum that are particularly interesting?

We have a bat fossil here that’s on loan from a private collection in Wyoming. Bats have sonar capabilities and can fly, but no one knew which came first. This specimen answers that question, because you can tell by the ears that it didn’t have sonar but could still fly.

Where do humans fit into the scheme of these extreme mammals? Are we the most extreme of them all?

The whole point in one section of the exhibit is that, like every other species, we’re extreme in some ways and not others. We have a nice interactive section where visitors can stand in front of a mirror that points out “extreme” parts of our bodies, like our huge brains and upright posture, which is very distinctive. But there are also human traits that have been around for hundreds of millions of years in our history without evolution, like our five fingers.

The exhibit touches on the potential for a “sixth mass extinction,” because mammals are starting to die out at a much quicker rate. What do you think is the cause of this?

The implication is that’s there’s a relationship to direct human impact and climate change that’s accelerating mammal extinction. In regards to climate change, sometimes the animals can’t adapt to the habitat or vegetation change, and they have the potential to go extinct. We’re clear in the exhibit, though, that it’s not yet a sixth mass extinction, it’s not the same magnitude of mass extinctions in earth’s history, but it is something noteworthy given how fast species are going extinct. 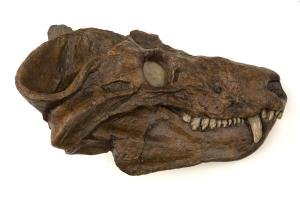 There are also some interesting interactive activities featured in the exhibit, particularly some simulators that allow visitors to control an animal’s movements with some dials. How did you come up with that idea, and what does it add to the exhibit?

We had some videos of different animals moving, like a porpoise, a bear and a bat. We animated those videos with computers, and now people can control those simulations manually. They show visitors different things about the animals, different aspects of their movement. It’s very popular and entertaining, part of the point being to show how when you put different body parts together, you have an incredible array of ways to function and make a living, like swimming, jumping, running, etc. It shows how different species are adapted in different ways to make a living.

What’s the take-away message of the exhibit?

The key is to understand the incredible diversity of our nearest relatives and the magnificent things mammals have done over history. We want visitors to come to a deeper understanding of how mammals came to be, and why it’s worth protecting them and preserving the richest diversity possible in the planet going forward.