A data center is where all the information you find on the Internet is stored. We take a look inside one of the data centers in Chicago, and find out why the city has become a national hotbed of cyber-storage on Chicago Tonight at 7:00 pm.

It’s easy enough to see the product of Chicago Tonight reporting, filming and editing – simply tune in to Chanel 11 on weekdays at 7:00 pm! But what goes on behind the scenes, and who is behind the camera? 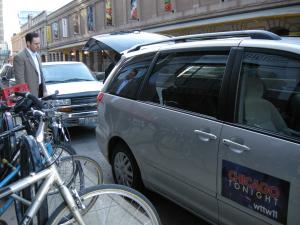 To find out, I followed correspondent Eddie Arruza on a recent shoot, with cameraman Roy Alan, to take a look at just what goes into producing a segment on the show.

At 10:30 am, Roy pulled up to the front entrance of WTTW’s studio, adjacent to Northeastern Illinois University’s Albany Park campus. Eddie and I got into the van, and I soon found a pile of technical equipment nestled cheek by jowl in the trunk and backseat. Roy is in charge of a vast array of large, heavy equipment -- multiple cameras, tripods, and lighting kits, microphones, to name a few -- all of which somehow fits onto an ingeniously rigged cart with the aid of some bungee cords. After more than 25 years on the job, Roy says, he can handle just about anything.

On the ride downtown, we discuss the battle plan. Interviews have been set up in advance through PR contacts for Hostway’s co-founder John Lee, and the University of Chicago’s IT Director, Ray Parpart. While the U of C’s data center only holds information pertinent to the university, Hostway is a hub for several different clients. We head to Hostway first. 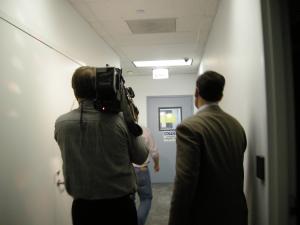 Because information safety is critical to a data center’s operation, security is incredibly tight. We parked a few blocks away and Roy unloaded the camera equipment, lighting kit and microphones. To shoot an interview at Hostway, we first had to be placed on the security clearance list, exchange our driver’s licenses for building IDs, and were even subject to a K-9 unit inspection! We were not allowed to film the entrance to the building or the front lobby. Once upstairs, we met with John, who further explained how Hostway takes precautions against both physical and technological threats. We could not film too closely to any of the servers, for fear of recording any identifying information. To all would-be evil-doers, virtual or physical: seriously, don’t even try. They have a mantrap!

To enter the room of the data center which we were allowed to film, one must present an electronic badge at a set of two doors. One door must be closed behind you for the other to open, thereby trapping anyone who cannot present ID at both checkpoints. In the other unfilmable section, electronic ID badges must be accompanied not only by a keyed-in code, but also a biometric reading. You can’t fool this one.

Before taking us through, John was first hooked up with a microphone, a task which requires running a cord up one’s shirt, pinning a mic to one’s collar and shoving the cords and wireless transmitter in one’s pocket. Trickier than it looks. 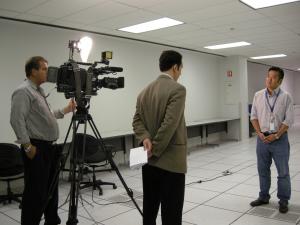 Once we cleared all checkpoints, Roy and Eddie decide on an interview location. With the practiced ease and speed of experience, Roy goes to town setting up in only a few minutes, despite not being able to find a wall outlet at first. Keeping cords tidy, he sets up a small spotlight and scrim, to soften the light in the harshly lit room. Roy pops an earpiece in so he can monitor the sound levels while filming while Eddie steps to one side of the camera, just out of frame with some notes in hand. The camera rolls and the magic happens.

Once the interview is over, Roy takes some “b-roll,” which is the video footage that runs underneath a voiceover; people walking down the street, fingers typing at a keyboard, a tight close-up of an electronic readout – all are minutiae you might not notice, but are important to giving color and detail to a story.

After we wrapped up at Hostway, we headed south to the University of Chicago for the second interview and then back to WTTW. But the process was not over. Eddie would go through hours worth of footage, write a script and work with an editor to piece it together into the polished product only a few minutes long – the segment you’ll see on air on Chicago Tonight!

Related Links:
More on Hostway
More on IT Services at the University of Chicago
More on John Lee
More on Ray Parpart
Image Gallery: