Sniffing out relatives? It may not be the human way, but it works for one finely dressed bird. We explore penguin behavior and more in tonight's Scientific Chicago with Neil Shubin on Chicago Tonight at 7:00 pm. 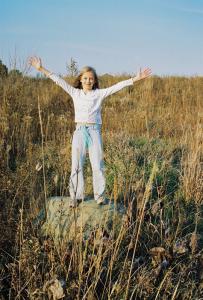 ADHD
A little bit of green does a lot of good. In a study of more than 400 children diagnosed with Attention Deficit Hyperactivity Disorder, researchers found a link between the childrens’ exposure to outdoor green spaces and the severity of their symptoms. Children who regularly played outside in green environments exhibited milder symptoms than those who played inside, and even those who played outside in playgrounds.

As of 2007, almost 10 percent of children aged 4-17 had been diagnosed with ADHD, according to the Centers for Disease Control and Prevention. And other studies have shown the outdoor exposure helped with concentration in non-ADHD children and adults.

“Before the current study, we were confident that acute exposures to nature – sort of one-time doses – have short-term impacts on ADHD symptoms,” said University of Illinois professor Frances Kuo. “The question is, if you’re getting chronic exposure, but it’s the same old stuff because it’s in your backyard or it’s the playground at your school, then does that help?”

The answer is yes, researchers say.

“On the whole, the green settings were related to milder overall symptoms than either the ‘built outdoors’ or ‘indoors’ settings,” said Andrea Faber Taylor, visiting teacher Associate at the University of Illinois.

Penguins
Scents often distinguish people you know – a particular meal smells like your mother’s kitchen, an aftershave like your grandfather, or a specific perfume like your spouse. Now, scientists from the University of Chicago and the Chicago Zoological Society say that birds, at least penguins, also use smells to recognize family members. 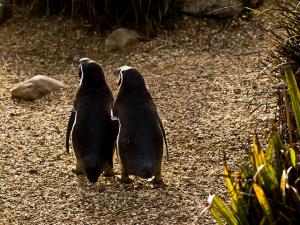 “The work by the research group is truly groundbreaking in that it shows for the first time ever in birds how the olfactory sense of captive penguins is both informative and functional in a behaviorally critical context: namely the recognition of friends from foes in general, and relatives from non-relatives in particular,” said Mark E. Hauber, professor of psychology at Hunter College, a specialist on bird social recognition.

The latest study, conducted on the Humboldt penguins in residence at the Brookfield Zoo, show how birds may have a keener and more nuanced sense of smell than previously thought. The penguins, it seem, use smell to determine if they are related to a potential mate.

In large colonies in the wild, typically made up of thousands of birds, penguins are still able to find their mates after leaving the nest for days to gather food.

At the Brookfield Zoo, researchers used a dozen penguins in the experiment, taking odor samples from glands near the penguins’ tails, using an oil that the birds use for preening. They then placed the penguins in separate enclosures. When the penguins were released to the scent-strewn areas, they spent more time in the kennels with familiar odors.

“Smell is likely the primary mechanism for kin recognition to avoid inbreeding within the colony,” said Heather Coffin, the lead author of the paper. 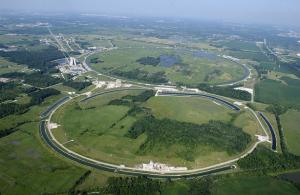 Tevatron
On September 30, the Tevatron particle accelerator ceased operating after more than 20 years smashing atoms and making discoveries. Four miles in length, the ring-shaped accelerator set up shop in Batavia, Illinois, at the Fermi National Accelerator Laboratory. The accelerator was constructed to shoot tiny particles of matter at each other at incredibly high speeds. In colliding, the hope was that the atoms would break apart into other particles, unlocking some of the smallest, but most momentous, secrets of the universe. Particle accelerators are a massive undertaking in all aspects: momentous in size, cost and what they might uncover. Because of these factors, only a few exist in the world. And after the 2009 construction of the Large Hadron Collider in at CERN, in Geneva, Switzerland, the Tevatron essentially became obsolete.

“It’s hard to think of shutting such a beautiful and important machine as the Tevatron down as a positive shift,” said Mark Messier, professor of physics at Indiana University and a spokesman for Fermilab’s newest neutrino-seeking project, NOvA. “But I think it’s good that Fermilab is moving on to new fields of exploration and looking to the future.”

Eventually, a section of the Tevatron’s tunnel and a collision detector will be converted for a museum. The hope is, however, that some pieces may be reused for the next particle accelerator, says Giovanni Punzi, a University of Pisa physicist.

For more on the Tevatron's closure, visit the links below.

Leonardo da Vinci
In Florence, Italy, 20 feet off the ground, on a wall behind a wall under a fresco in the Palazzo Vecchio – lies a mystery.

In 1503, both Leonardo da Vinci and Michelangelo were commissioned to paint in the newly constructed “Hall of 500” of the Palazzo. Leonardo chose to depict the Battle of Anghiari, a complex scene of soldiers on horseback wheeling around one another, swords clashing. Accounts vary as to why, but the painting was sadly never completed. To make matters 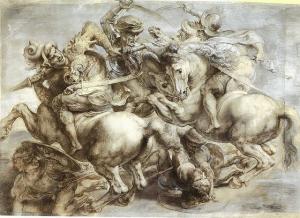 worse, his painting was later covered by a brick wall and a fresco by another artist, Georgio Vasari. The Italian government forbade anyone from tampering with Vasari's fresco, or the wall. Leonardo’s work was lost. Until now.

Argonne National Laboratory physicist Robert Smither suggested using a neutron “camera” to detect the existence of the Leonardo. A generator would shoot beams of neutrons at the wall, and with luck, some would pass through the frescoes and the walls, and Leonardo’s paint underneath. Reacting with the metals used to make traditional oil paint, the neutrons would create gamma rays, which would pass back through the wall and be detected, and researchers could “see” the paint beneath.

“We think it should be possible to detect whether paint from the original painting survives, and perhaps even map an outline of the painting based on the colors,” Smither said.