In 2004, in the Canadian Arctic, University of Chicago paleontologist Neil Shubin and his team made an amazing discovery.

They found a fossilized amphibian he named Tiktaalik, believed to be among the first fish to have ventured out of the sea and onto land some 375 million years ago.

Now the team says another fossil found at the same time — and for years largely ignored — could shed more light on that pivotal time in the evolution of life.

The newly described fossil closely resembles Tiktaalik but has features that made it better suited to life in the water than its more adventurous cousin. The new fossil species, which the team named Qikiqtania wakei, was much smaller than Tiktaalik at just 30 inches long. For comparison, its cousin could grow to up to nine feet.

The new fossil includes parts of the jaws and portions of the neck and scales. Most importantly, it also features a complete pectoral fin with a distinct humerus bone that lacks the ridges that would indicate where muscles and joints would be on a limb evolved toward walking on land. To Shubin’s team, that suggested it returned to paddling the water after its ancestors were using their limbs for walking.

“At first we thought it could be a juvenile Tiktaalik, because it was smaller and maybe some of those processes hadn’t developed yet,” Shubin said. “But the humerus is smooth and boomerang shaped, and it doesn’t have the elements that would support it pushing up on land. It’s remarkably different and suggests something new.”

Shubin actually found the fossil days before Tiktaalik was discovered, at a site about one mile east on southern Ellesmere Island in the territory of Nunavut in northern Arctic Canada. The name Qikiatania comes from the Inuktitut word Qikiqtaaluk, or Qikiqtani, the traditional name for the region where the fossil site is located.

The species designation wakei is in memory of the late David Wake, an eminent evolutionary biologist from the University of California at Berkeley and mentor to Shubin. 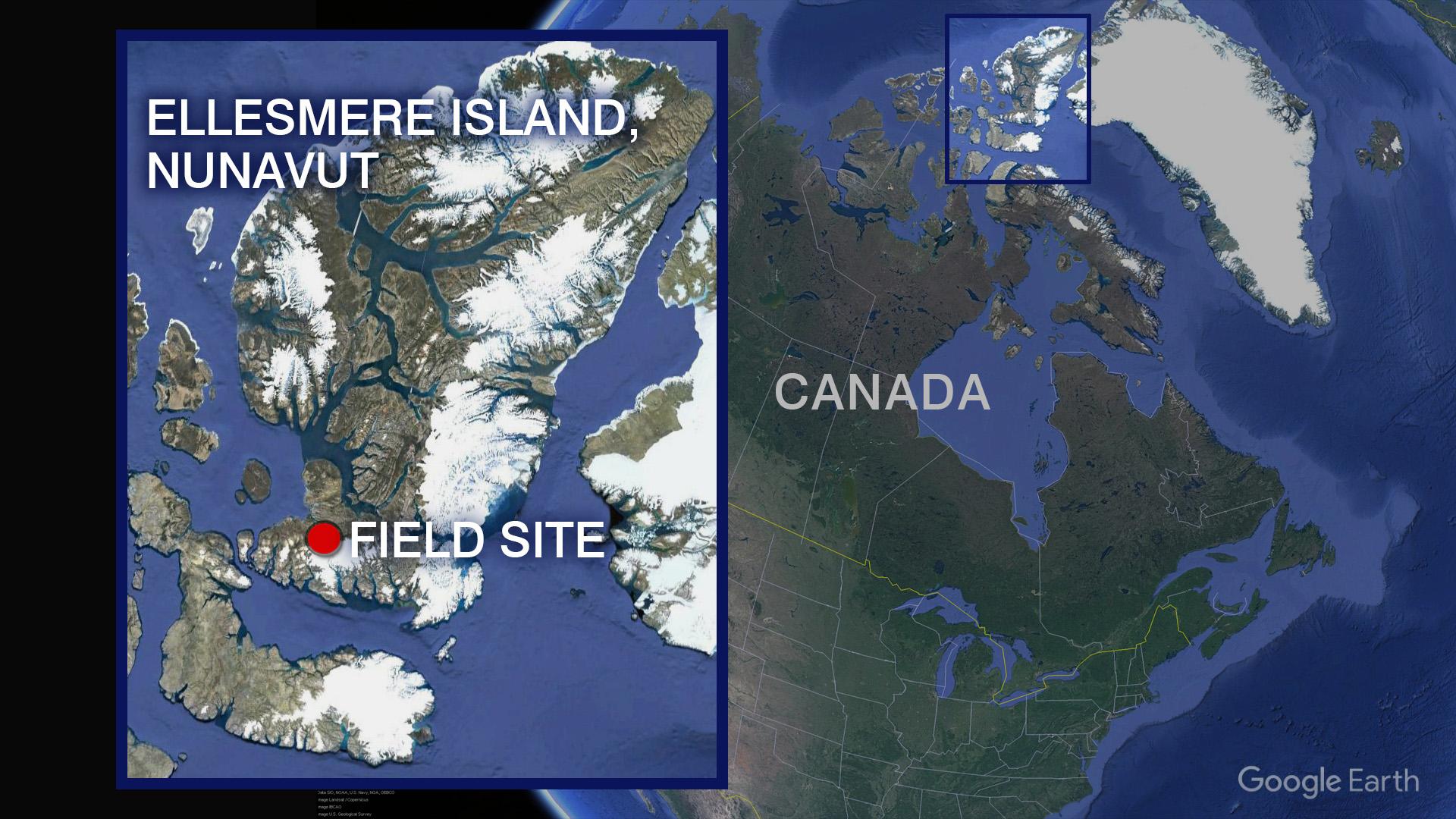 A map of the Canadian Arctic where University of Chicago paleontologist Neil Shubin and his team discovered a new fossil. (Credit: Google Earth)

Shubin and his field partner, Ted Daeschler, from the Academy of Natural Sciences of Drexel University, collected the specimens after spotting a few promising looking rocks with distinctive, white scales on the surface. But for fifteen years they sat in storage, largely ignored.

But in 2020 postdoctoral researchers Justin Lemberg and Tom Stewart CT-scanned one of the larger rock specimens and realized that it contained a pectoral fin. But the fossil was too deep inside the rock to get a good image.

And then the pandemic struck.

“We were trying to collect as much CT-data of the material as we could before the lockdown, and the very last piece we scanned was a large, unassuming block with only a few flecks of scales visible from the surface,” said Lemberg, who is now doing cultural resource management fieldwork in Southern California. “We could hardly believe it when the first, grainy images of a pectoral fin came into view. We knew we could collect a better scan of the block if we had the time, but that was March 13, 2020, and the university shut down all non-essential operations the following week.”

When campus facilities reopened in the summer of 2020, the team arranged to have parts of the fossilized rock removed so that a CT scanner could get closer and produce a better image. The resulting images revealed a nearly complete pectoral fin and upper limb, including the distinctive humerus bone.

“That’s what blew our minds,” Shubin said. “This was by no means a fascinating block at first, but we realized during the COVID lockdown when we couldn’t get in the lab that the original scan wasn’t good enough and we needed to trim the block. And when we did, look at what happened. It gave us something exciting to work on during the pandemic. It’s a fabulous story.”

The team’s analysis suggests Qikiqtania is a little older than Tiktaalik and among the earliest creatures known to have finger-like digits. But unlike its cousin, Qikiqtania appears to have evolved to walk on land – but then its evolution appears to have reversed course and it gave up walking to return to the water.

While it’s tempting to assume evolution is linear, researchers say that Qikiqtania shows that some animals stayed on a different path that ultimately didn’t work out. Maybe that’s a lesson for those wishing Tiktaalik had stayed in the water with it.

“Tiktaalik is often treated as a transitional animal because it’s easy to see the stepwise pattern of changes from life in the water to life on land. But we know that in evolution things aren’t always so simple,” said Stewart, who will be joining the faculty at Penn State University this summer. “We don’t often get glimpses into this part of vertebrate history. Now we’re starting to uncover that diversity and to get a sense of the ecology and unique adaptations of these animals. It’s more than simple transformation with just a limited number of species.”