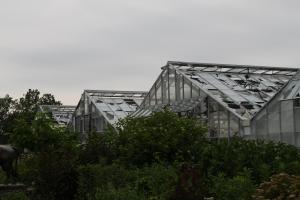 Late at night on June 30, a massive hail storm pummeled the city. After a routine cleanup the next day, most of the city went on about its business.

But officials at the Garfield Park Conservatory showed up the next morning to find its roof almost completely destroyed, and the hundreds of species of plants exposed to the elements.

The institution is still reeling from the damage, and the cleanup is still around the clock.

“It's kind of mind-boggling when you're watching it happen,” said Garfield Park Conservatory Director Mary Eysenbach.

The Garfield Park Conservatory is still a shell of its former self. Ponds have been drained, rooms have been closed, and plants and trees have been removed.

“I'm a little heartbroken to be standing here because all the magnolia trees that were in here are gone, and those were my favorite,” said Eunita Rushing, President of the Garfield Park Alliance.

More than two months after the damage, shards of glass still litter the grounds. Crews deploy every method imaginable to get them out of the plants and soil – including vacuuming.

“You vacuum soil like you would vacuum any other surface, and that is, you just get right on top of it,” said Eysenbach. “The challenge in this case is they're not just vacuuming soil, they're vacuuming plant material.” 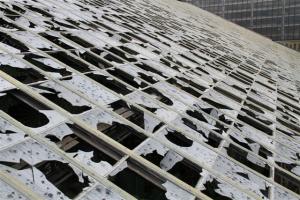 Officials say they were stunned at the damage from the hail storm, after having seen the roof survive massive wind storms and other hail events.

“When I came up the ramp and I saw the ‘Caution’ tape, and I saw the glass shattered, I was numb, really,” said Rushing. “I didn't know what to think, and I just couldn't wrap my brain around what could have damaged the place like this.”

Eysenbach says the hail was larger than any she'd ever seen, and she believes that was what did the roof in. Officials still haven't wrapped their heads around what it will cost to repair the damage.

“The cleanup is upwards of $2 million,” said Rushing. “The Park District does have insurance, so that's good, but as you know anyone who has ever dealt with insurance, it never fully covers all the costs to bring something back to it's original state, nor does it cover deductibles.”

Other than money, the most pressing concern is the well-being of the Conservatory's hundreds of species of plants. Most can only survive in climate-controlled environments.

“This is a worldwide destination for ferns and fern lovers, and ferns like humidity and they don't like the sun,” said Eysenbach.

The Conservatory immediately put a shade cloth on the roof of the fern room to block the sun, but it hasn't mitigated all the damage. Eysenbach points to one brown, crispy fern that looks like it has seen better days.

“This frond has dried out, and you can see where it’s broken off,” she said. “It’s probably just especially sensitive to the light and we haven't adequately been able to keep it out.”

Mother Nature's pitched in with a hot and humid summer. Good for the ferns, but bad for the dozens of species of desert plants.

“When it rains, the rain comes in and those plants really don't like water, so some of those are starting to rot,” said Eysenbach.

And in the exhibit room, it’s still all glass as far as the eye can see. Conservatory officials are debating how to replace the roof, but the implementation may still be months away.

Before the Conservatory can tackle a long-term fix, there's a more immediate problem to deal with. The clock is ticking and winter is right around the corner.

Eysenbach says a temporary cover is being prepared to keep out the coming cold.

“I think it'll be OK with the temporary covering,” she said. “Polycarbonate, the material they're actually using, has a very good insulation level.”

Officials say the response from the public has been overwhelming. Art sales, fundraisers and concerts have all helped fund the effort as Park District officials work to pick up the pieces. The Conservatory will hold a County Fair this Saturday to help raise money for the cleanup.