Mayor Lori Lightfoot’s reelection campaign not only sent emails to Chicago Public Schools teachers asking them to encourage their students to volunteer to help Lightfoot win a second term as mayor – and earn class credit – but identical emails went to instructors at the City Colleges of Chicago.

In her first public remarks since WTTW News broke the story, Lightfoot said the emails should not have been sent, and blamed “a young staffer” for making a “mistake” that was “well intentioned.” No one else in her campaign’s leadership knew about it until it unleashed a firestorm of criticism from her opponents in next month’s election and demands for investigations, Lightfoot said.

“It never should have happened,” Lightfoot said. “It is not going to happen again.”

Lightfoot said she put an immediate stop to the emails after WTTW News contacted her campaign on Wednesday.

However, a spokesperson for her campaign initially defended the outreach “to provide young people with the opportunity to engage with our campaign, learn more about the importance of civic engagement and participate in the most American of processes.”

More than two hours later, Lightfoot acknowledged the emails breached what should be a “solid wall that must exist between campaign and official activities.”

Lightfoot said she did not know why her campaign offered class credit to those students who volunteered to help her reelection bid, but said her campaign did not “coordinate” with school district officials or have any “conversations with them.”

Repeatedly referring to the staffer responsible for the emails as “young” and “20-something,” Lightfoot said the staffer gathered the emails of CPS teachers “by doing a Google search” and would not be fired.

“This young woman understands the magnitude of the issue and is, frankly, mortified,” Lightfoot said. “She gets it, 100%.”

It was unclear how many City Colleges of Chicago and Chicago Public Schools employees received the email from Megan Crane, whose LinkedIn page identifies her as the deputy campaign manager for Lightfoot. The message was sent to instructors’ official work email accounts, which end in cps.edu and ccc.edu.

Chicago’s ethics ordinance prohibits the use of public resources, including email accounts, for non-official purposes.

The first email to City Colleges instructors urging them ask their students to volunteer for the Lightfoot campaign was sent on Aug. 19, 2022, according to an email obtained by WTTW News. The second was sent Monday.

The email sent in August prompted at least one instructor to file a complaint with the City Colleges’ ethics office. It is unclear whether that complaint prompted an investigation, or the status of that probe.

It is not clear why the Lightfoot campaign again emailed City Colleges employees after that admonishment.

City Colleges Chancellor Juan Salgado was appointed by former Mayor Rahm Emanuel in 2017 and has remained in his post under Lightfoot.

As mayor of Chicago, Lightfoot appoints not only the chancellor of the City Colleges but also the members of the City Colleges Board of Trustees, who must be confirmed by the Chicago City Council. Chicago’s ethics ordinance prohibits the use of public resources, including email accounts, for non-official purposes.

All employees of the city and its sister agencies are prohibited from engaging in work on behalf of political campaigns while being paid with taxpayer funds. Educators encouraging their students to volunteer for a particular campaign could violate those rules and could result in the employees’ discipline.

Chicago Public Schools Inspector General Will Fletcher announced Thursday his office “has opened an investigation into this matter and we are currently gathering information to determine which, if any, policies have been violated.”

Lightfoot said she would “cooperate fully” with any probe. 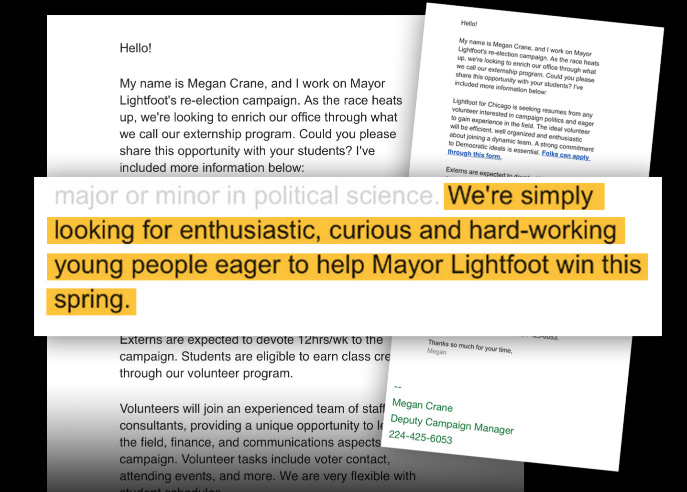 Chicago Teachers Union President Stacy Davis Gates told WTTW News the campaign’s action was “unethical” and that she was concerned teachers who decline to volunteer for the mayor’s campaign, or encourage their students to do so, could face retaliation.

Davis Gates said Wednesday it was unclear how many teachers received the email, which attorneys for the union believe not only violates the city’s government ethics ordinance but also the ethics policy imposed by Lightfoot when she took office in 2019.

The teachers’ union has endorsed Cook County Commissioner Brandon Johnson in the race for mayor. Johnson is a paid staff member of the union.

In July, the Chicago Board of Education rejected a recommendation from Chicago Public Schools CEO Pedro Martinez to fire two George Washington High School teachers who protested city officials’ decision to allow a metal shredding and recycling operation to move from the North Side to the Southeast Side.

Chicago Teachers Union leaders accused Lightfoot of retaliating against Lauren Bianchi and Chuck Stark for protesting the decision to give the parent company of General Iron the green light to move its metal shredding and recycling operation from Lincoln Park to the Southeast Side outside the mayor’s Logan Square home.

Political patronage has long plagued all levels of Illinois government, with employees’ jobs often hinging on their political activities in support of — or against — specific political candidates. The practice — which gave the Chicago machine much of its power — has been outlawed after a series of court decisions that forced government agencies to reform their practices.

Lightfoot ran for mayor in 2019 on a platform promising to root out corruption at City Hall and toughen the city’s ethics regulations in an attempt to break the grip of the city's “corrupt political machine.”

In response to a question from WTTW News, Lightfoot said the controversy over the emails was not evidence she had failed to fufill those promises.

Election Day is Feb. 28. If no candidate gets more than 50% of the vote, a runoff between the top two candidates will take place on April 4.