ALONG THE MISSISSIPPI RIVER (AP) — Adam Thomas starts harvesting soybeans on his Illinois farm when the dew burns off in the morning. This year, dry weather accelerated the work, allowing him to start early. His problem was getting the soybeans to market.

About 60% of the Midwest and northern Great Plain states are in a drought. Nearly the entire stretch of the Mississippi River — from Minnesota to the river’s mouth in Louisiana — has experienced below average rainfall over the past two months. As a result, water levels on the river have dropped to near-record lows, disrupting ship and barge traffic that is critical for moving recently harvested agricultural goods such as soybeans and corn downriver for export.

The lack of rain has seriously affected commerce. The river moves more than half of all U.S. grain exports but the drought has reduced the flow of goods by about 45%, according to industry estimates cited by the federal government. Prices for rail shipments, an alternative for sending goods by barge, are also up.

Thomas farms at the confluence of the Ohio and Mississippi rivers and doesn’t own enough grain storage to wait out the high costs of shipping.

“I’ve had to take a price discount,” he said.

Climate change is generally driving wetter conditions in the Upper Mississippi River region but in recent months, lower water levels have revealed parts that are usually inaccessible. Thousands of visitors last weekend walked across typically submerged riverbed to Tower Rock, a protruding formation about 100 miles (161 kilometers) southeast of St. Louis. It’s the first time since 2012 that tourists could make the trek and stay dry. On the border of Tennessee and Missouri where the river is a half-mile wide, four-wheeler tracks snake across vast stretches of exposed riverbed.

In a badly needed break from the dry weather earlier this week, the region finally received some rain.

“It is kind of taking the edge off the pain of the low water, but it is not going to completely alleviate it,” said Kai Roth of the Lower Mississippi River Forecast Center, adding that the river needs several rounds of “good, soaking rain.”

Barges are at risk of hitting bottom and getting stuck in the mud. Earlier this month, the U.S. Coast Guard said there had been at least eight such “groundings.” Some barges touch the bottom but don’t get stuck. Others need salvage companies to help them out. Barges are cautioned to lighten their loads to prevent them from sinking too deep in the water, but that means they can carry fewer goods.

To ensure that vessels can travel safely, federal officials regularly meet, consider the depth of the river and talk to the shipping industry to determine local closures and traffic restrictions. When a stretch is temporarily closed, hundreds of barges may line up to wait.

“It’s very dynamic: Things are changing constantly,” said Eric Carrero, the Coast Guard’s director of western rivers and waterways. “Every day, when we are doing our surveys, we’re finding areas that are shallow and they need to dredge.”

After a closed-down section is dredged, officials mark a safe channel and barges can once again pass through.

In some places, storage at barge terminals is filling up, preventing more goods from coming in, according to Mike Steenhoek, executive director of the Soy Transportation Coalition. He said the influx of grain into a compromised river transportation system is like “attaching a garden hose to a fire hydrant.” High costs for farmers have led some to wait to ship their goods, he added.

For tourists, much of the river is still accessible. Cruise ships are built to withstand the river’s extremes: Big engines fight fast currents in the spring and shallow drafts keep the boats moving in a drought, said Charles Robertson, president and CEO of American Cruise Lines, which operates five cruise ships that can carry 150 to 190 passengers each. 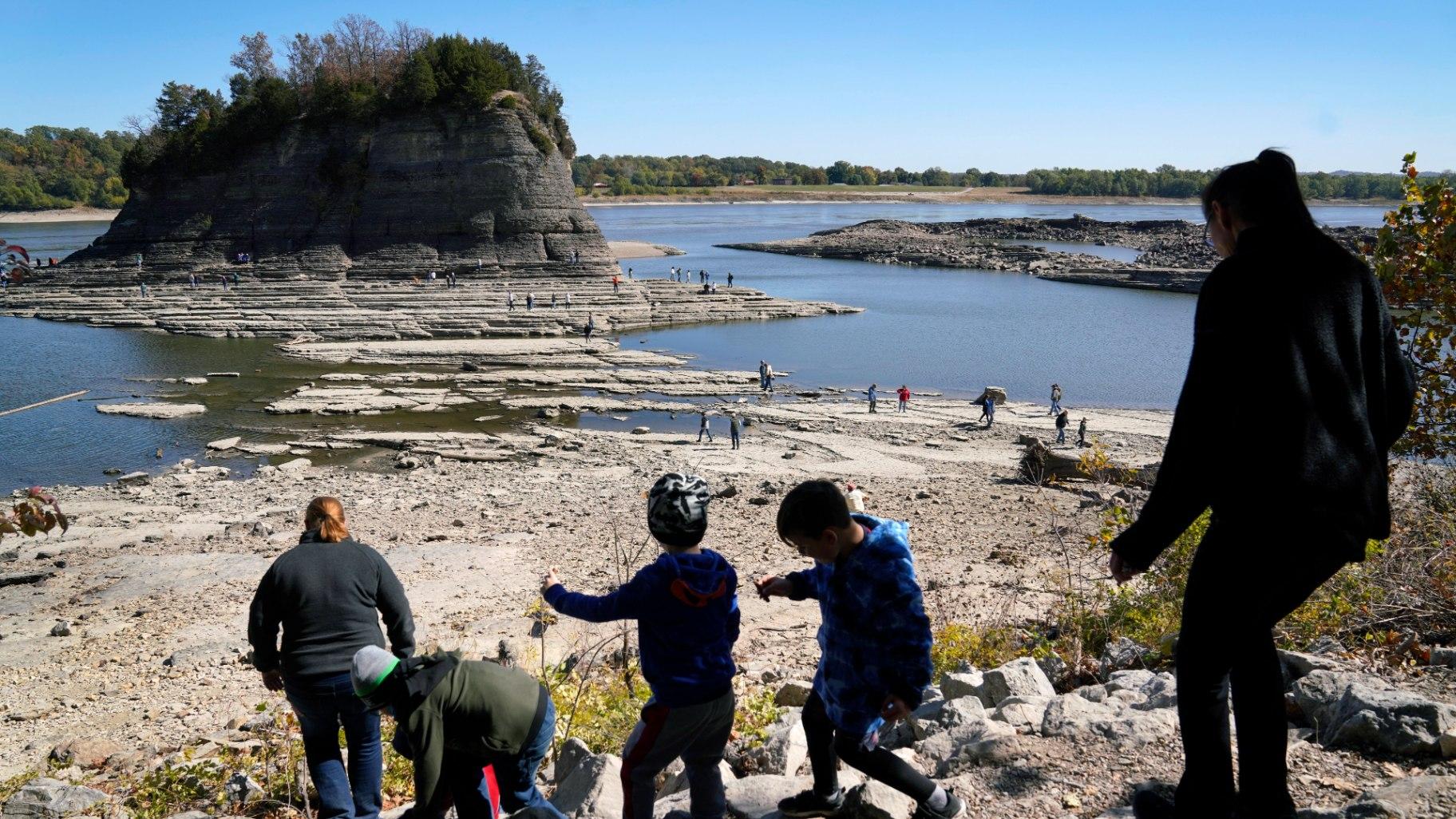 People walk toward Tower Rock to check out the attraction normally surrounded by the Mississippi River and only accessible by boat, Oct. 19, 2022, in Perry County, Mo. Foot traffic to the rock formation has been made possible because of near record low water levels along the river. (AP Photo / Jeff Roberson, File)

Nighttime operations are limited, however, to help ships avoid new obstacles that the drought has exposed. And some landing areas aren’t accessible because of low water — the river is dried out along the edges. In Vicksburg, Mississippi, a cruise ship couldn’t get to a ramp that typically loads passengers, so the city, with help from townspeople, laid gravel and plywood to create a makeshift walkway. For some, it adds to the adventure.

“They’re experiencing the headlines that most of the rest of the country is reading,” Robertson said.

Drought is a prolonged problem in California, which just recorded its driest three-year stretch on record, a situation that has stressed water supplies and increased wildfire risk. Climate change is raising temperatures and making droughts more common and worse.

Brad Pugh, a meteorologist with the National Oceanic and Atmospheric Administration, said however, that the current drought in the Midwest is likely “driven by short-term weather patterns” and he wouldn’t link it to climate change. 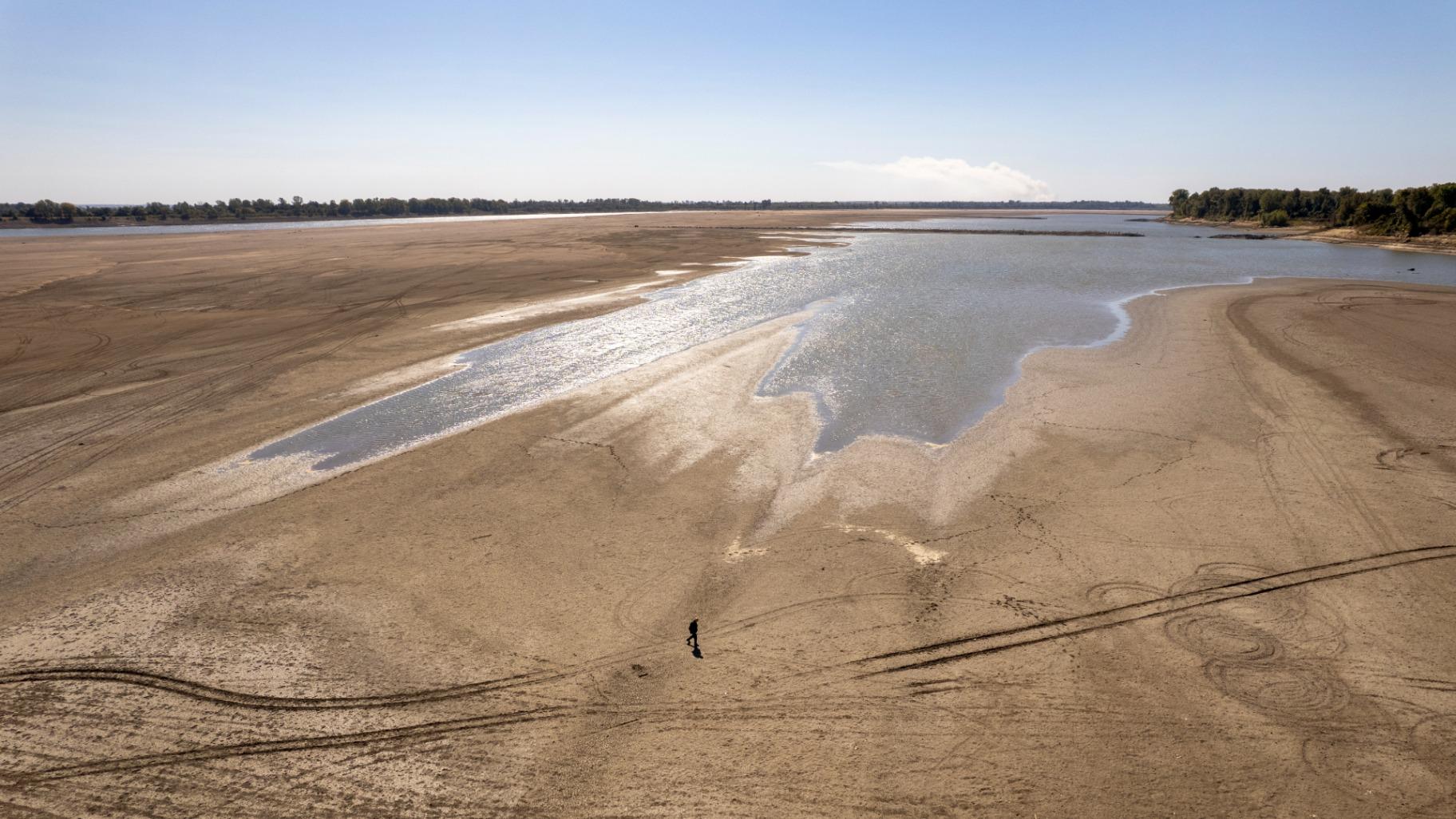 In the Midwest, climate change is increasing the intensity of some rainstorms. Flood severity on the upper Mississippi River is growing faster than any other area of the country, according to NOAA.

Some worry that fertilizer and manure have accumulated on farms and could quickly wash off in a hard rain, reducing oxygen levels in rivers and streams and threatening aquatic life.

In rare cases, communities are moving to alternate sources of drinking water away from the Mississippi. The drought also is threatening to dry out drinking-water wells in Iowa and Nebraska, NOAA says.

It’s unclear how much longer the drought will last. In the near term, there is a chance for rain, but NOAA notes that in November, below average rainfall is more likely in central states such as Missouri, which would extend shipping problems on the river. In some northern states including Michigan, the winter may bring more moisture, but less rain is expected in southern states.

“It does take a lot of rainfall to really get the river to rise,” Roth said.