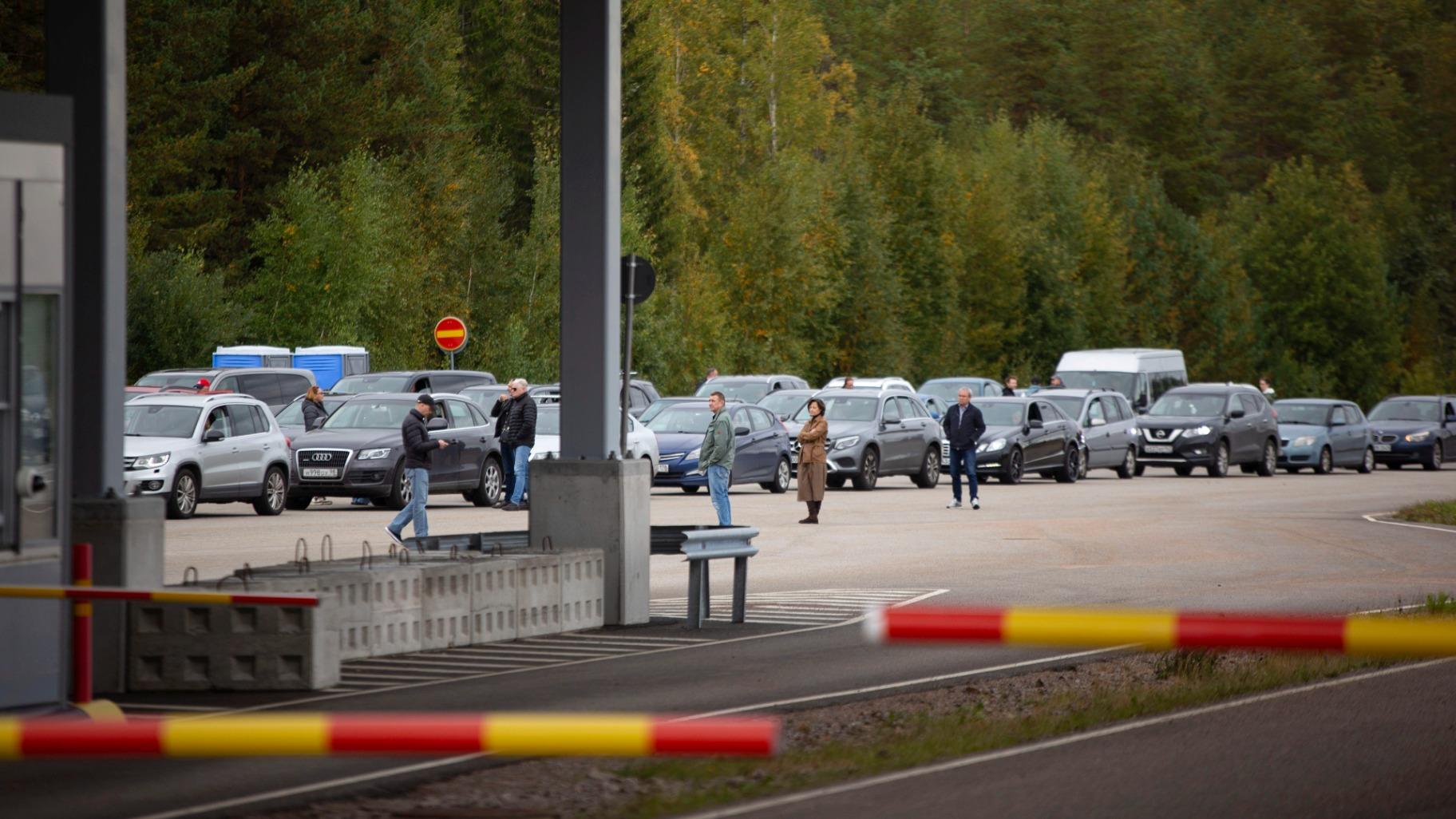 Cars queue to cross the border from Russia to Finland at the Vaalimaa border check point in Virolahti, Finland, Friday Sept. 23, 2022. (Sasu Makinen / Lehtikuva via AP)

Queues stretching for 6 miles formed on a road leading to the southern border with Georgia, according to Yandex Maps, a Russian online map service.

The lines of cars were so long at the border with Kazakhstan that some people abandoned their vehicles and proceeded on foot — just as some Ukrainians did after Russia invaded their country on Feb. 24.

Meanwhile, dozens of flights out of Russia — with tickets sold at sky-high prices — carried men to international destinations such as Turkey, Armenia, Azerbaijan and Serbia, where Russians don’t need visas.

Among those who reached Turkey was a 41-year-old who landed in Istanbul with a suitcase and a backpack and plans to start a new life in Israel.

He referred to Russian President Vladimir Putin as a “war criminal.”

Yevgeny decided to flee after Putin announced a partial military call-up on Wednesday. The total number of reservists involved could be as high as 300,000.

The Nasha Niva newspaper, one of the oldest independent newspapers in Belarus, reported that Belarusian security services were ordered to track down Russians fleeing from the draft, find them in hotels and rented apartments and report them to Russian authorities.

Russian authorities tried to calm an anxious public about the draft.

Legislators introduced a bill Friday that would suspend or reduce loan payments for Russians called up for duty. News outlets emphasized that draftees would have the same status as professional soldiers and be paid the same, and that their civilian jobs would be held for them.

The Defense Ministry said that many people who work in high tech, communications or finance will be exempt from the call-up “to ensure the operations’’ of those fields, the Tass news agency reported.

The exodus unfolded as a Kremlin-orchestrated referendum got underway seeking to make occupied regions of Ukraine part of Russia. Kyiv and the West condemned it as a rigged election whose result was preordained by Moscow.

German government officials voiced a desire to help Russian men deserting military service, and they called for a European solution.

“Those who bravely stand up to Putin’s regime and thereby put themselves in great danger can apply for asylum in Germany on the grounds of political persecution,” the spokesman for German Interior Minister Nancy Faeser said.

The spokesman, Maximilian Kall, said deserters and those refusing to be drafted would receive refugee status in Germany if they are at risk of serious repression, though every case is examined individually.

But they would first have to make it to Germany, which has no land border with Russia, and like other European Union countries has become far more difficult for Russians to travel to.

The EU banned direct flights between its 27 member states and Russia after the attack on Ukraine, and recently agreed to limit issuing Schengen visas, which allow free movement across much of Europe.

Some European officials view fleeing Russians as potential security risks. They hope that by not opening their borders, it will increase pressure against Putin at home.

Latvian Foreign Minister Edgars Rinkevics said Thursday that many of those fleeing “were fine with killing Ukrainians. They did not protest then. It is not right to consider them as conscientious objectors.”

The one EU country that is still accepting Russians with Schengen visas is Finland, which has a 1,340-kilometer (830-mile) border with Russia.

Finland border guards said Friday that the number of people entering from Russia has climbed sharply, with media reporting a 107% increase compared with last week.

At Vaalimaa, one of the busiest crossings on the border, the line of waiting cars stretched for half a kilometer (a third of a mile), the Finnish Border Guard said.

Finnish broadcaster MTV carried interviews with Russian men who had just crossed into Finland at the Virolahti border crossing, including with a man named Yuri from Moscow who said that no “sane person” wants to go to war.

A Russian man from St. Petersburg, Andrei Balakirov, said he had been mentally prepared to leave Russia for half a year but put it off until the mobilization.

Valery, a man from Samara who was heading to Spain, agreed, calling the mobilization “a great tragedy.”

“It’s hard to describe what’s happening. I feel sorry for those who are forced to fight against their will. I’ve heard stories that people have been given these orders right in the streets — scary.”