GREENBELT, Md. (AP) — A sparkling landscape of baby stars. A foamy blue and orange view of a dying star. Five galaxies in a cosmic dance. The splendors of the universe glowed in a new batch of images released Tuesday from NASA’s powerful new telescope.

The unveiling from the $10 billion James Webb Space Telescope began Monday at the White House with a sneak peek of the first shot — a jumble of distant galaxies that went deeper into the cosmos than humanity has ever seen.

Tuesday’s releases showed parts of the universe seen by other telescopes. But Webb’s sheer power, distant location from Earth and use of the infrared light spectrum showed them in a new light that scientists said was almost as much art as science.

“It’s the beauty but also the story,” NASA senior Webb scientist John Mather, a Nobel laureate, said after the reveal. “It’s the story of where did we come from.”

And, he said, the more he looked at the images, the more he became convinced that life exists elsewhere in those thousands of stars and hundreds of galaxies.

With Webb, scientist hope to glimpse light from the first stars and galaxies that formed 13.7 billion years ago, just 100 million years from the universe-creating Big Bang. The telescope also will scan the atmospheres of alien worlds for possible signs of life.

“Every image is a new discovery and each will give humanity a view of the humanity that we’ve never seen before,’’ NASA Administrator Bill Nelson said Tuesday, rhapsodizing over images showing “the formation of stars, devouring black holes.”

Webb’s use of the infrared light spectrum allows the telescope to see through the cosmic dust and see faraway light from the corners of the universe, scientists said.

The European and Canadian space agencies joined NASA in building the telescope, which was launched in December after years of delays and cost overruns. Webb is considered the successor to the highly successful, but aging Hubble Space Telescope. 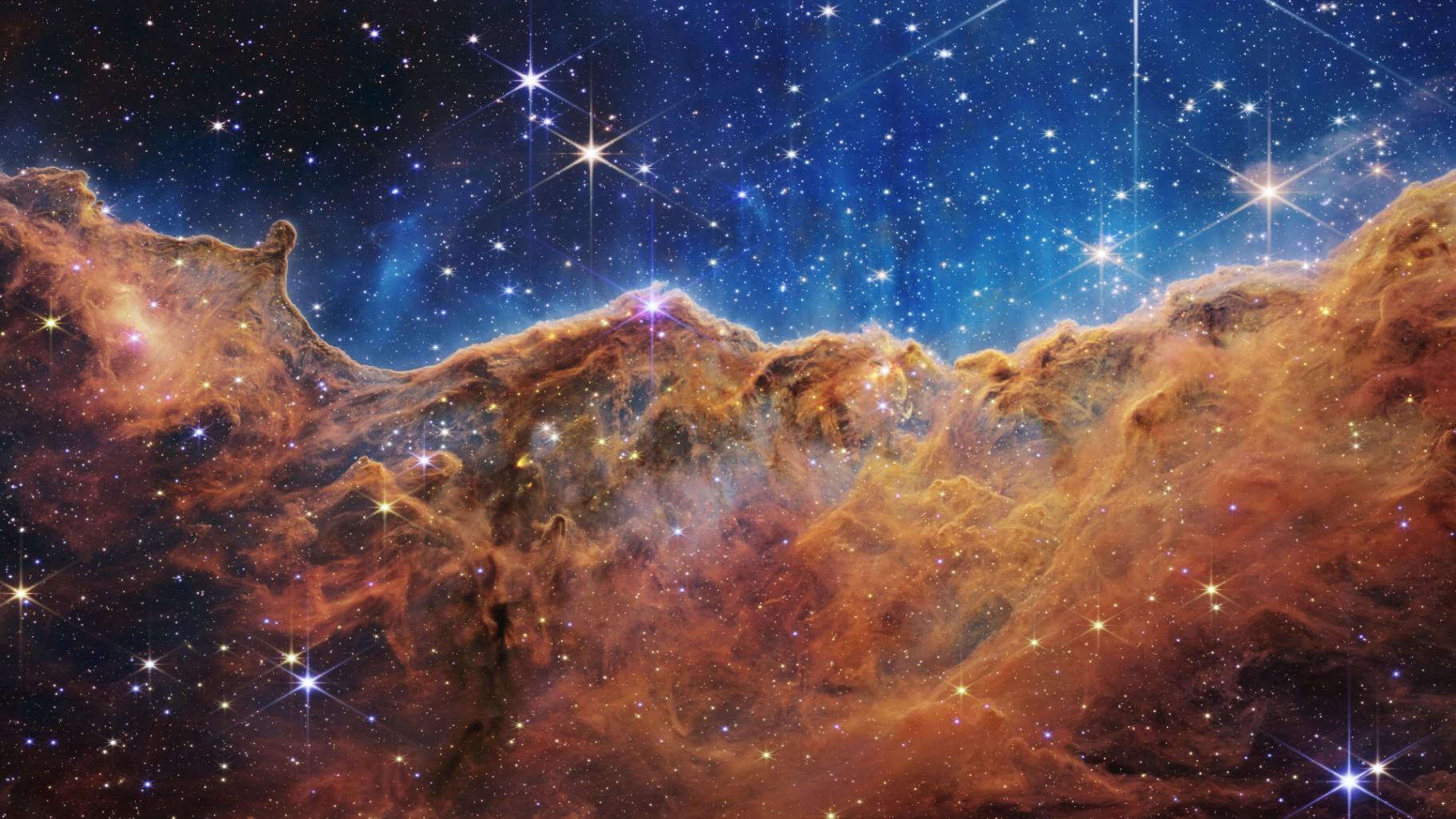 Some of Hubble’s most stunning images have been shots of the Carina nebula, one of the bright stellar nurseries in the sky, about 7,600 light-years away. Webb project scientist Klaus Pontoppidan decided to focus one of Webb’s early gazes on that location because he knew it would be the frameable beauty shot. The result was an image of a colorful landscape of bubbles and cavities where stars were being born.

“This is art,” Pontoppidan said. “I really wanted to have that landscape. It has that contrast. We have the blue. We have golden. There’s dark. There’s bright. There’s just a sharp image.”

On tap for release Thursday: A close-up of Jupiter that shows one of its faint rings and a few of its moons, he said.

Also among the new shots:

— Southern Ring nebula, which is sometimes called “eight-burst.” Images show a dying star with a foamy edge of escaping gas. It’s about 2,500 light-years away. A light-year is 5.8 trillion miles. “This is the end for this star, but the beginning for other stars,” Pontoppidan said. As it dies, it throws off parts that seed the galaxy with elements used for new stars, he said. 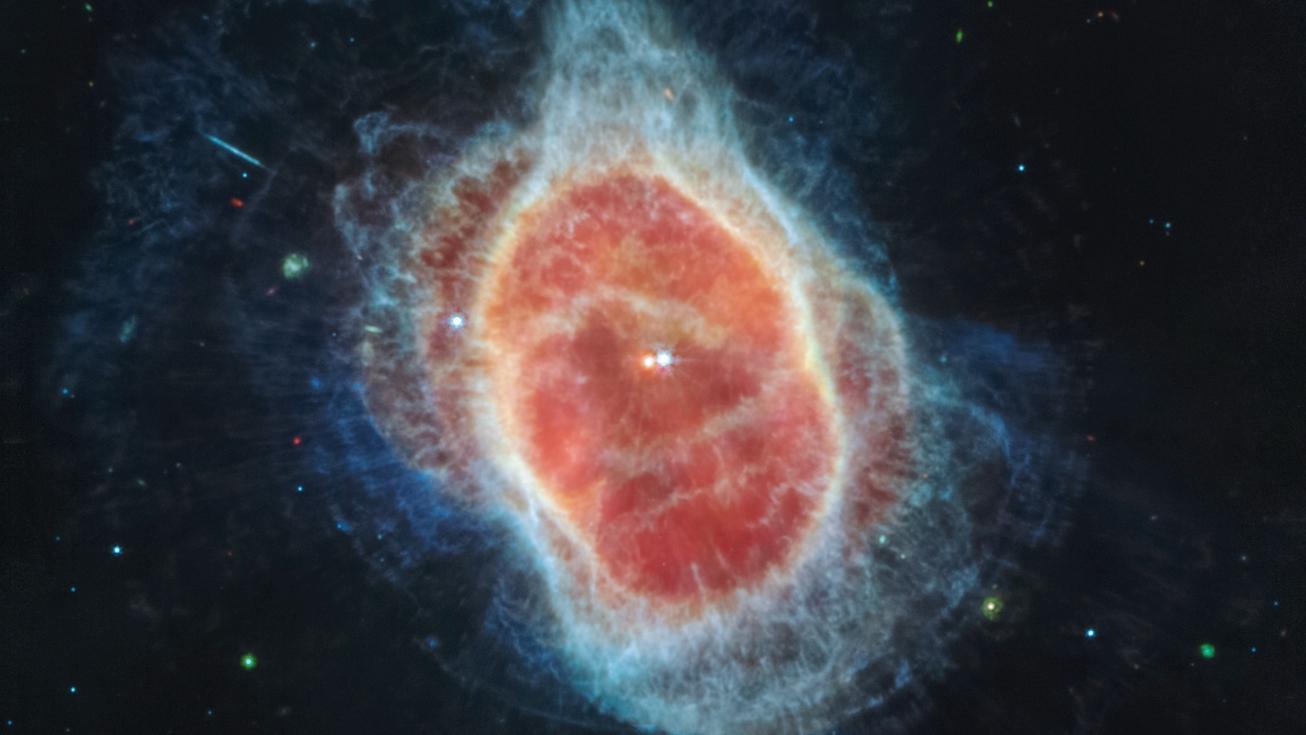 This image released by NASA on Tuesday, July 12, 2022, shows the Southern Ring Nebula for the first time in mid-infrared light. It is a hot, dense white dwarf star, according to NASA. (NASA, ESA, CSA, STScI via AP)

— Stephan’s Quintet, five galaxies in a cosmic dance that was first seen 225 years ago in the constellation Pegasus. It includes a black hole that scientists said showed material “swallowed by this sort of cosmic monster.” Webb “has just given us a new, unprecedented 290 million-year-old view of what this Quintet is up to,” Cornell University astronomer Lisa Kaltenegger, who wasn’t part of the Webb team, said in an email. 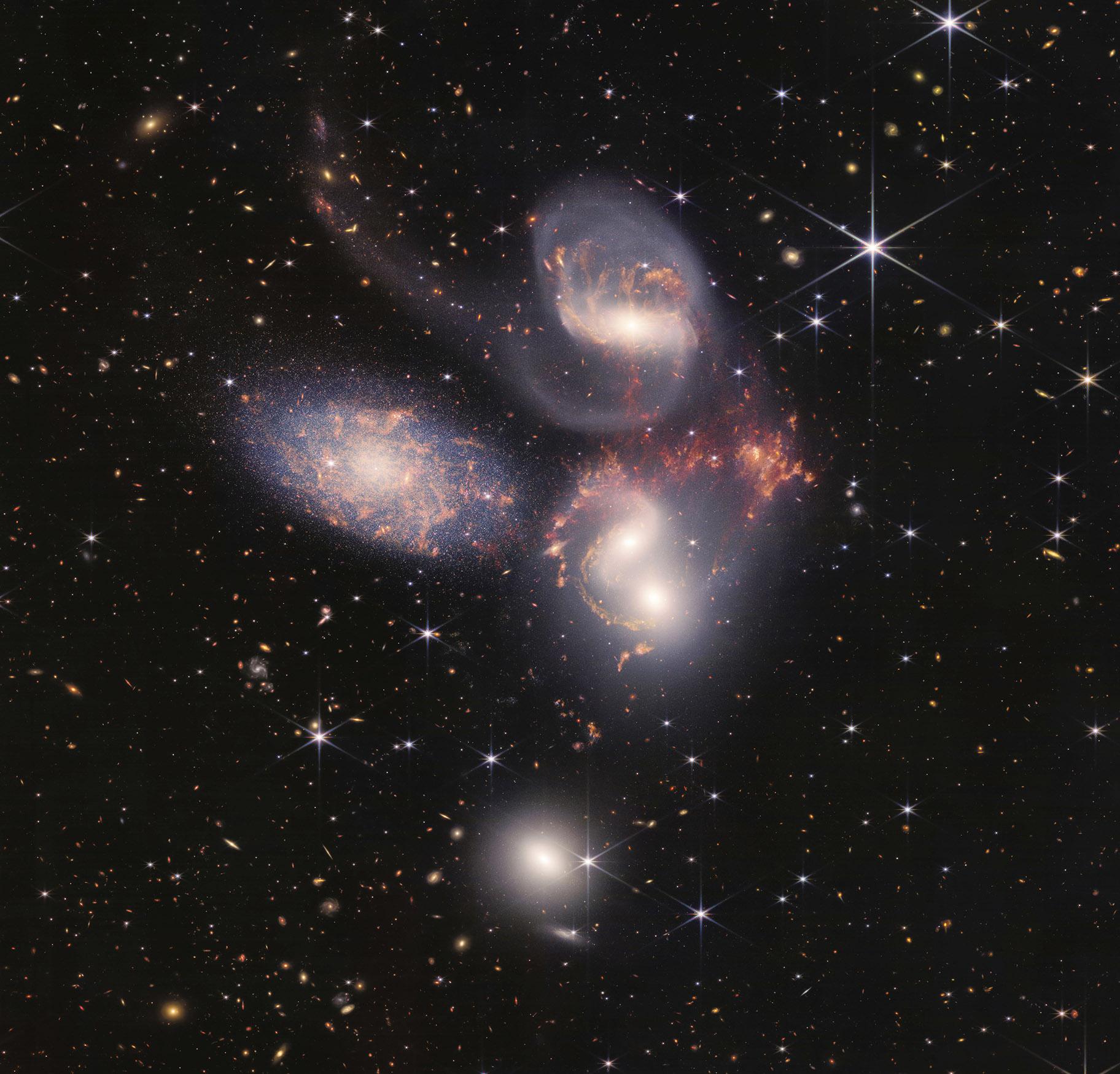 This image provided by NASA on Tuesday, July 12, 2022, shows Stephan's Quintet, a visual grouping of five galaxies captured by the Webb Telescope's Near-Infrared Camera (NIRCam) and Mid-Infrared Instrument (MIRI). This mosaic was constructed from almost 1,000 separate image files, according to NASA. (NASA, ESA, CSA, and STScI via AP)

— A giant planet called WASP-96b. It’s about the size of Saturn and is 1,150 light-years away. A gas planet, it’s not a candidate for life elsewhere but a key target for astronomers. Instead of an image, the telescope used its infrared detectors to look at the chemical composition of the planet’s atmosphere. It showed water vapor in the super-hot planet’s atmosphere and even found the chemical spectrum of neon, showing clouds where astronomers thought there were none.

The images were released one-by-one at an event at NASA’s Goddard Space Center that included cheerleaders with pompoms the color of the telescope’s golden mirrors.

“It moves you. This is so so beautiful,” Thomas Zurbuchen, chief of NASA’s science missions, said after the event. “Nature is beautiful. To me this is about beauty.”

The world’s biggest and most powerful space telescope rocketed away last December from French Guiana in South America. It reached its lookout point 1 million miles (1.6 million kilometers) from Earth in January. Then the lengthy process began to align the mirrors, get the infrared detectors cold enough to operate and calibrate the science instruments, all protected by a sunshade the size of a tennis court.