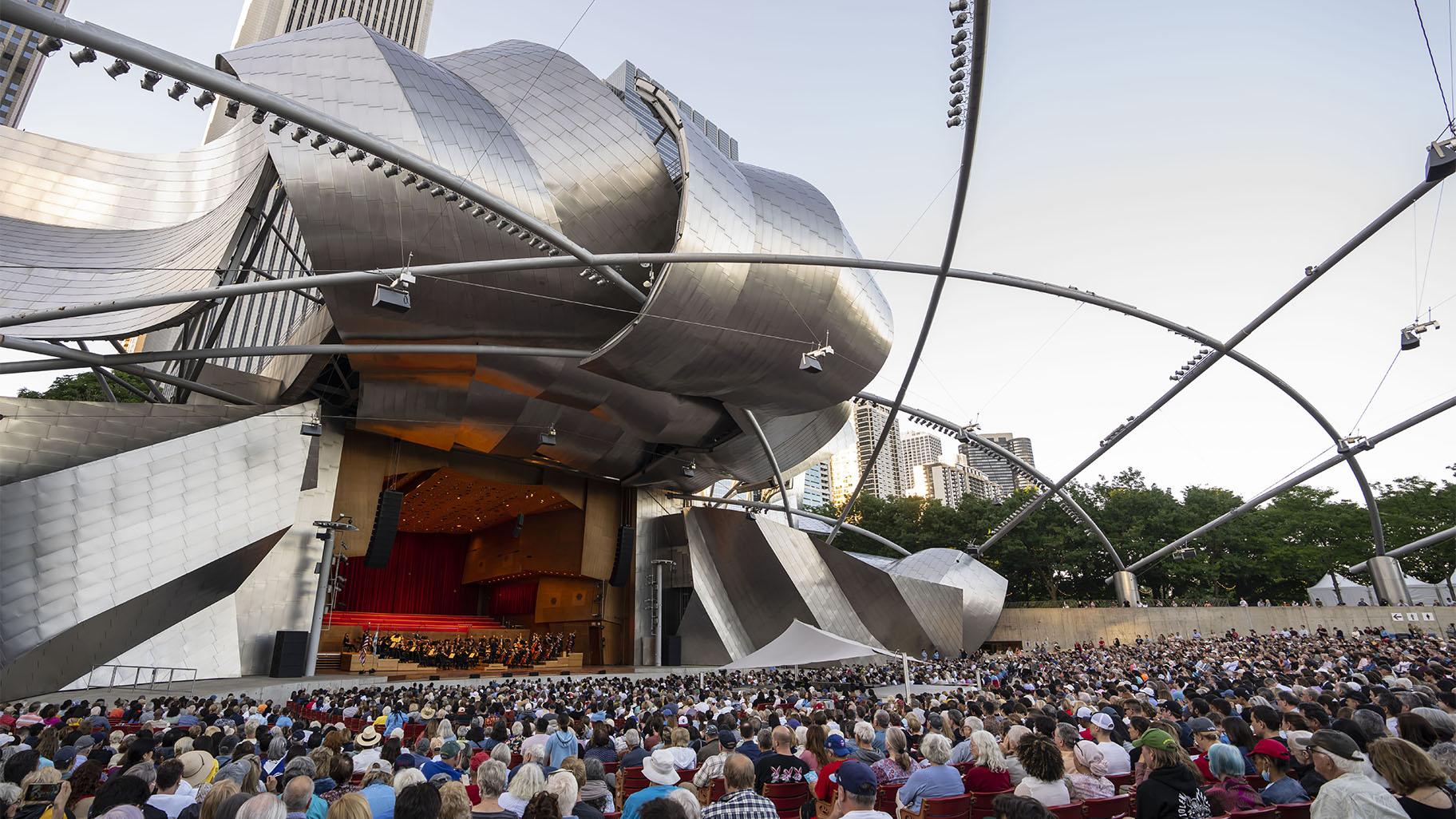 A capacity crowd of 12,000 packs Millennium Park on a beautiful summer evening in the city to enjoy a free Concert for Chicago featuring the Chicago Symphony Orchestra and its Music Director Riccardo Muti performing music by Shostakovich and Tchaikovsky. The performance marked the first return to Millennium Park for Muti and the CSO since 2018. (Credit: Todd Rosenberg Photography)

An audience of 12,000 people poured into Millennium Park Monday evening to hear maestro Riccardo Muti lead the Chicago Symphony Orchestra in a thrilling performance of works by Shostakovich and Tchaikovsky on the Pritzker Pavilion stage. And thanks to the breathtakingly beautiful musical splendor of the concert (along with Mother Nature’s priceless contribution of perfect weather), one thing became undeniably clear: All the doomsday prophecies about classical music being an elitist art form whose days are numbered happens to be a twisted, easily deniable assumption.

Not only was the spill-over crowd at rapt attention throughout, but there was a palpable sense of elation about the event. In the wake of both a pandemic and a tumultuous period of crime (some of it in this very park), it suggested that this music is not only a reminder of the genius of the composers who created it, but a vivid example of the brilliant synchrony of the musicians who can bring it to life.

Muti noted in his spirited address to the audience at the end of the performance, this music was not only played by “one of the greatest orchestras in the world ... whose musicians give you their soul, their enthusiasm and more,” but it possesses a kind of magical healing property that brings people together at a time of chaos. And in his typically droll fashion he also noted the fact that while this concert was free and open to the public, he wished those who were able would head to the box office to purchase tickets, and would also encourage the government to recognize the importance of supporting music education. 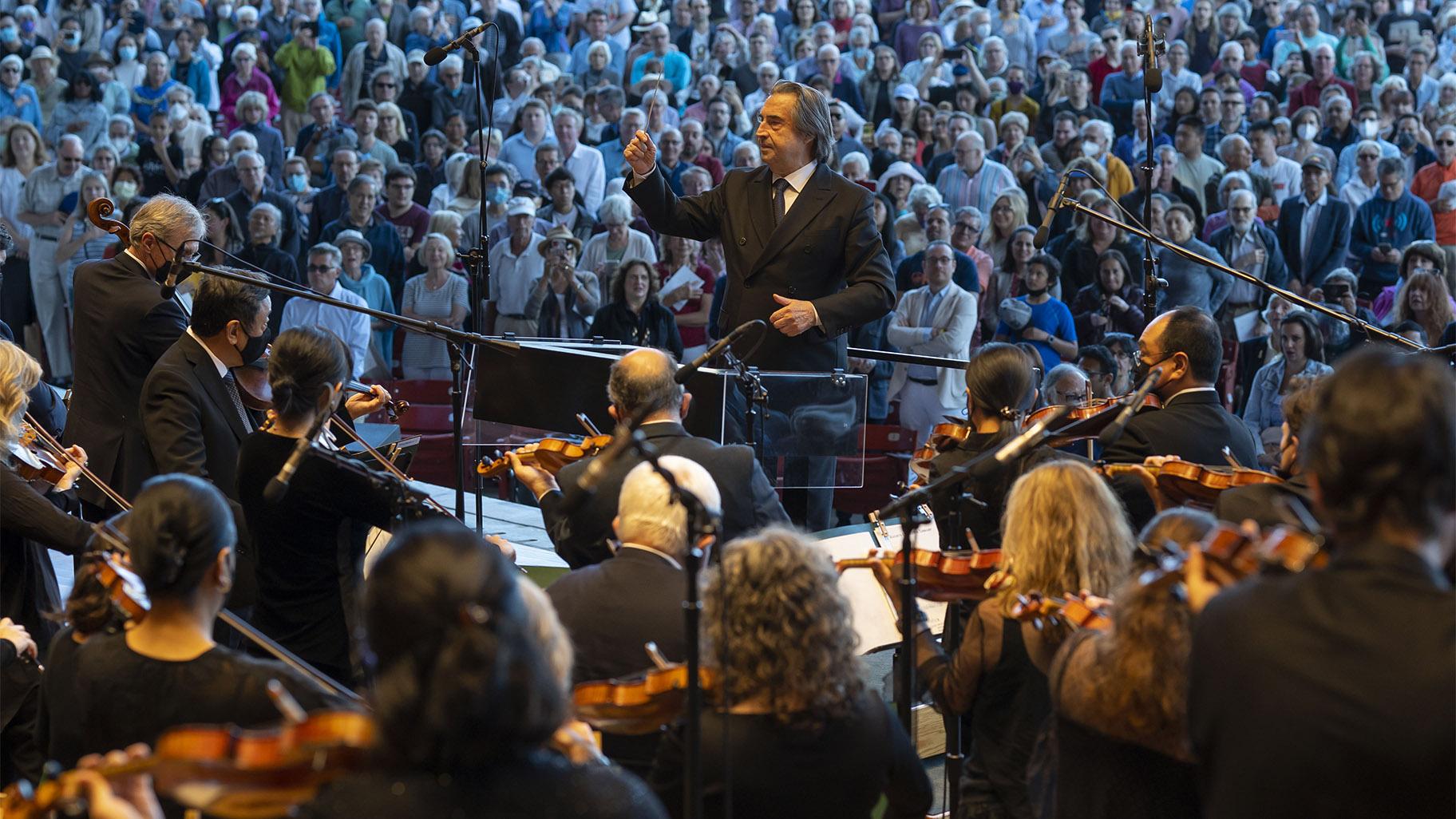 Music Director Riccardo Muti and the Chicago Symphony Orchestra opened the Concert for Chicago in the Pritzker Pavilion of Millennium Park by performing the National Anthem in front of a capacity crowd of 12,000. The program also included Shostakovich’s Festive Overture and Tchaikovsky’s Fourth Symphony and marked the first return to Millennium Park for Muti and the CSO since 2018. (Credit: Todd Rosenberg Photography)

And now to the music. The “Concert for Chicago” program was comprised of ideally chosen works by two Russian composers (one from the 19th century and the other from the 20th) whose own tumultuous lives, whether political or personal, were matched by their genius.

From the very moment the horns and timpani sounded the opening notes of Shostakovich’s wildly colorful “Festive Overture” (written for his 1954 opera, “The Thieving Magpie,” a work I don’t know, but would now like to hear in full), it was clear that this was an ideal piece with which to generate excitement. Joined by the strings and winds and the clash of cymbals, it was then off to the races in a wild musical gallop with the sort of thrilling energy and superb modulations the CSO can generate so masterfully. (In a lively program note, Daniel Jaffe explained how Shostakovich, known for composing with exceptional speed, wrote the “Overture” almost overnight, and he also quoted the composer’s friend who perfectly described the result as “a brilliant effervescent work, with its vivacious energy spilling over like uncorked champagne.”

And then it was on to Tchaikovsky’s “Symphony No. 4 in F Minor.” It’s a work I’ve heard countless times before but never with the kind of galvanic energy, emotional heat and distinctive freshness that Muti’s interpretation elicited from his bravura orchestra.

The symphony, a vivid example of the composer’s gift as an emotional colorist, is awash with a sense of heartbreak, emotional heat and stormy grandeur. It’s a seamless, dramatic mix of moods generated by the wildly triumphant sound of the brass, a ravishing use of the winds, the intense plucking by the strings, dramatic percussion riffs and several sequences that are vivid reminders of Tchaikovsky’s iconic scores for the ballet and his use of folk dance themes.

All this was conjured in the wake of immensely demanding concert performances of Verdi’s opera, “Un ballo in maschera” at Orchestra Hall, the last of the three to be given June 28. It also marks the final lap in Muti’s penultimate season as the CSO’s music director. Although anyone who attended this or the Verdi) concert was unquestionably left with the hope that Muti might be asked to stay on for an additional season. Perhaps one could be underwritten by the mogul Ken Griffin (who, along with the city), helped underwrite this free concert. You may dismiss that man’s politics, and his upcoming move of his business from Chicago to Florida, but you can only hope he will continue to support the CSO.