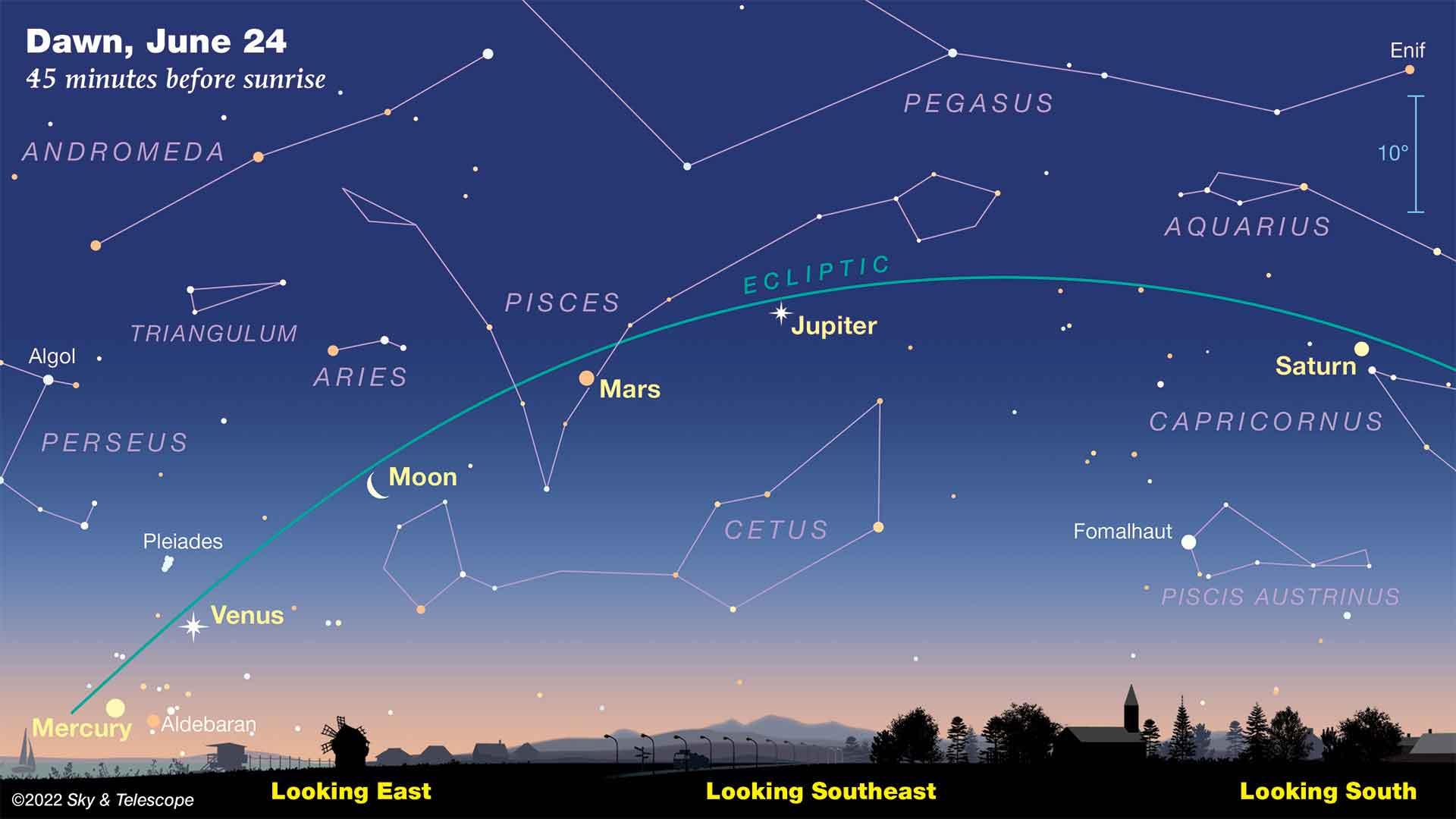 At dawn on June 24, the crescent moon will be placed between Venus and Mars. (Illustration courtesy of Sky & Telescope)

The five planets that are visible to the naked eye are now lining up in a particularly unique formation in the early morning hours, all of them appearing in the same part of the sky.

Here’s what’s even more amazing for skywatchers: The dazzling show — a phenomenon some refer to as a “planet parade” — isn’t one of those one-night-only celestial events that almost always seems to be spoiled in Chicago by cloud cover.

The planetary alignment of Mercury, Venus, Mars, Jupiter and Saturn has been going on for weeks and can be seen through the end of June, giving people multiple viewing opportunities. Though these same planets have all aligned in recent years, this particular grouping is special in that the planets are appearing in the same order as their position in the solar system, a far rarer occurrence and one that won’t happen again until 2040. (Neptune and Uranus are also in the mix, but are too faint to see without equipment.)

Want to catch the show? Here are some tips:

— Be prepared to lose a little sleep. The planets are best visible an hour before sunrise. Sunrise in Chicago currently occurs at approximately 5:15 a.m., so set the alarm and grab a seat for the planet parade at 4:15 a.m.

— Find an observation spot with a clear view of the eastern horizon, because Mercury is hanging quite low. If you have buildings, trees or utility wires blocking your sightlines, you might have to content yourself with just four planets. Don’t feel bad — NASA isn’t even counting on Mercury.

— The planets are arrayed east to south. Look for Mercury low in the east and then scan southeast to south, not in a straight line. Venus is the brightest of the planets, Mars is reddish and Saturn is likely to be the faintest.

— Don’t know a planet from a star? Let the moon be your guide. The satellite recently joined the show and has been working its way across the planets. On June 24, the moon will appear between Mars and Venus, metaphorically standing in for Earth. By June 27, the crescent moon will be to the left of Mercury, essentially at the head of the line, making it easier to spot the planets.

Heads up, stargazers. FIVE planets in our #SolarSystem will be visible in the early morning sky at the same time for the remainder of June!

Save our #PlanetParade chart to guide you as you look up! pic.twitter.com/sCxOSItCmM