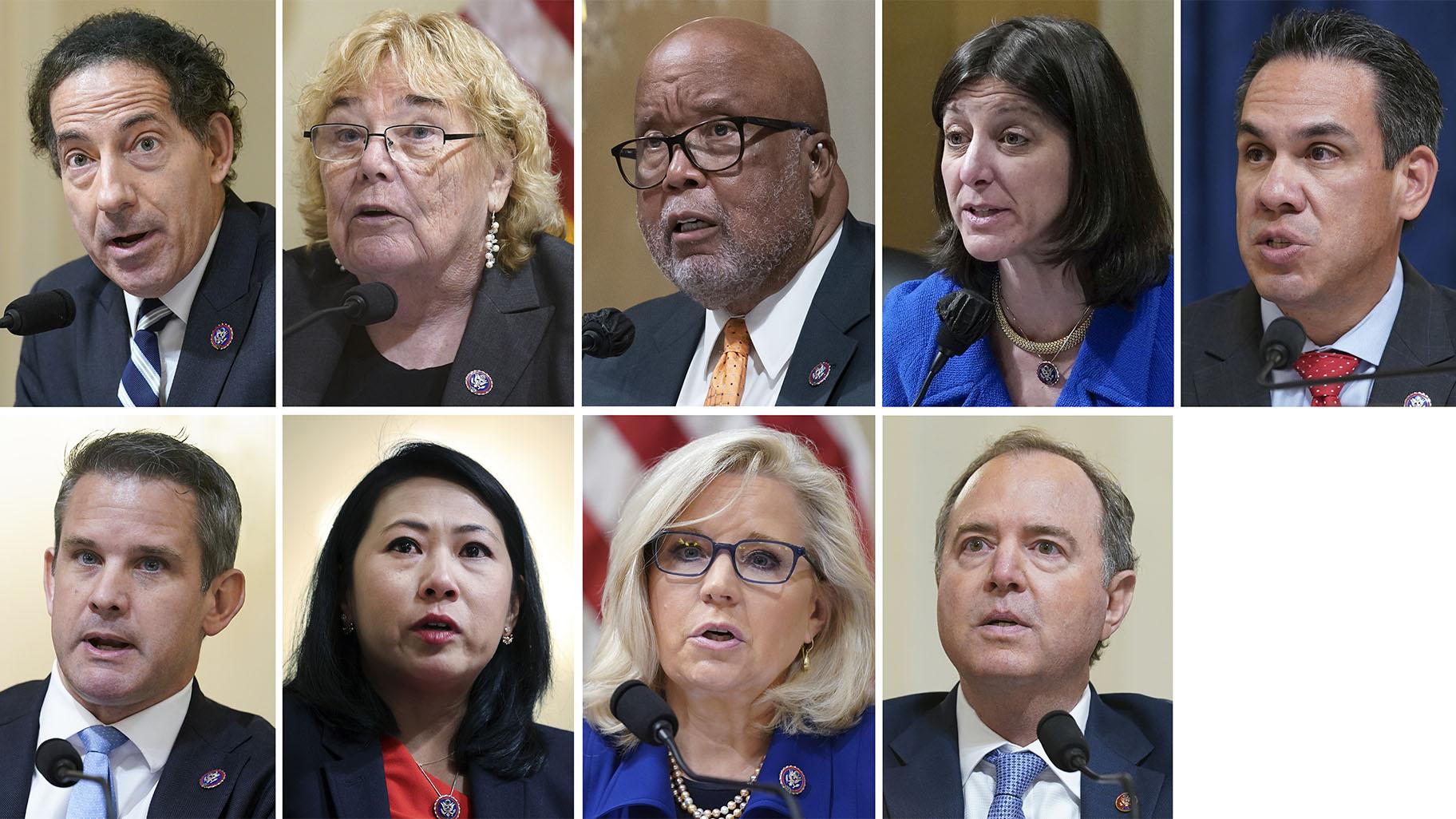 WASHINGTON (AP) — The nine members of the House committee investigating the Jan. 6 U.S. Capitol insurrection are on diverging political paths as they prepare for public hearings that could become a defining moment in their careers.

Working in private rooms in a Capitol office building, the seven Democrats and two Republicans have participated in hours of interviews, hearing testimony from members of former President Donald Trump’s family, former Justice Department officials and Trump White House aides. They’ve issued dozens of subpoenas, interviewed more than 1,000 witnesses and gathered tens of thousands of pages of documents in an effort to piece together the worst attack on the Capitol in two centuries.

But as the lawmakers wrap up their investigation, many are at a personal crossroads.

Two members have decided to leave Congress after this year. Others are facing difficult reelections. A few are eyeing leadership posts, and one lawmaker is even pondering a potential 2024 presidential run.

A look at the nine lawmakers who soon will be in the limelight:

As the committee’s chairman, Thompson sees his career-long struggle for civil rights as the foundation of his work in leading the investigation. Domestic extremism and its links to white supremacy are a familiar subject for Thompson, not only from his time on the Homeland Security Committee but also from his early involvement in the civil rights movement in Mississippi.

The 74-year-old lawmaker was sitting in the upper House gallery on Jan. 6, watching rioters’ attempts to break through the doors. For him, the experience recalled the “unpleasant experiences” from his early days as a Black politician in the South.

Republicans and Democrats alike last summer pushed Thompson as the right choice to lead the investigation, seeing his understated style as the right fit for an investigation that was certain to be partisan and fraught.

In the months that have followed, even as some of his more outspoken counterparts have appeared on television to repeatedly criticize Trump, Thompson has mostly steered clear of the spectacle. Instead, he has made his voice heard in poignant opening remarks at hearings and in language in subpoenas, emphasizing the responsibility of the legislative branch to probe the “violent attack on the seat of our democracy.”

Cheney, the daughter of former Vice President Dick Cheney, is vice chair of the panel and has emerged as its most outspoken member. She broke with most other Republicans after the insurrection, voting for Trump’s impeachment and declaring that he “lit the flame” that ignited the attack.

The stance led to Cheney’s ouster from GOP leadership and censure from the national party. And while the party that made her family’s legacy pushed her away, House Democrats have embraced her as a beacon of courage. Speaker Nancy Pelosi recruited her and fellow censured Republican Rep. Adam Kinzinger to be the sole GOP members of the panel.

In the span of the inquiry, Cheney has become an even more fervent critic of the Republican former president. Trump, in turn, is trying to drive her out of politics by denying her another term in office.

Cheney now faces a Trump-backed challenge in Wyoming, which will hold its primary in August. She has set personal fundraising records ahead of the race, in part thanks to her role on the committee, but political strategists have said she’ll likely need some votes from Democrats and independents to win. Much of the party is now against her reelection, including House Republican leader Kevin McCarthy, who drove her out of leadership.

There’s also been chatter in Washington about Cheney parlaying her political standing to mount a 2024 presidential run against Trump.

Murphy is one of two lame-duck members seated on the select committee. The 43-year-old joined Kinzinger in announcing this year she would not seek another term. Both lawmakers cited a desire to spend more time with their families after facing an onslaught of threats since the committee was formed.

“Public service is not without personal sacrifice,” Murphy said in a statement announcing her decision. “And as a mom of two young children, my time away from them has been hard.”

“This was not an easy decision, but it was the right decision,” she added.

The Florida Democrat, who unseated a 12-term Republican incumbent in 2016 and helped her party flip back the House in 2018, has also been an outspoken critic of the growing partisan nature of Capitol Hill and the rift between moderates like herself and the more left-leaning members of her party.

Murphy, who in her nearly four years in Congress was often seen as a bipartisan dealmaker, has also taken a less Trump-focused approach in her role as a member of the committee, instead zeroing in on the impact the former president’s efforts could have on future election integrity and voter enfranchisement. Murphy said she “is not done with public service” and will continue her work as chair of the Florida Democratic Party’s Democracy and Voter Protection Program.

Aguilar is the only member of the committee currently serving in House leadership. The 42-year-old lawmaker representing California’s Inland Empire is also likely to move up from the No. 6 spot in the Democratic caucus when leadership vacancies arise in the next year. Before coming to Congress in 2014, he was the mayor of Redlands, California.

When the district became more favorable to Democrats after a round of redistricting, Aguilar ran again and again until he flipped the Republican-held seat. He is currently the highest-ranking Latino in Congress.

On the select committee, Aguilar has been able to leverage his spot in leadership as the vice chair of the Democratic caucus to communicate the panel’s goals and objectives as lawmakers face an onslaught of criticism from Republicans that the investigation is partisan and an abuse of Congress’ investigatory powers.

Kinzinger is one of two Republicans serving on the Jan. 6 panel. His willingness to criticize Trump, GOP leadership and lawmakers on the far right has left him with few allies in his party. He opted last fall to not seek reelection rather than run in a primary later this month that would have had him facing off against GOP Rep. Darin LaHood in a newly redrawn congressional district that tilts strongly to the right.

Kinzinger was one of 10 Republicans who voted to impeach Trump on a charge of inciting the insurrection at the Capitol. Trump celebrated Kinzinger’s decision to retire after serving out his sixth term, crowing “2 down, 8 to go!” But Kinzinger isn’t going away quietly. He appears to relish taking digs at the former president and at McCarthy, who has worked strenuously to stay in the former president’s good graces.

Kinzinger, 44, is a combat veteran who flew missions in Afghanistan and Iraq. He continues to serve as a pilot in the Air National Guard with the rank of lieutenant colonel. He has hinted at other political plans, saying upon his retirement that “this isn’t the end of my political future but the beginning.”

Schiff is serving his 11th term in Congress and has parlayed that experience into a role as chairman of the House’s intelligence committee. But he is perhaps best known as the lead impeachment manager in Trump’s first Senate trial, where he warned senators weighing the charges that they knew they couldn’t trust the president to do what’s right for the country.

“You can trust he will do what’s right for Donald Trump. He’ll do it now. He’s done it before. He’ll do it for the next several months. He’ll do it in the election if he’s allowed to,” Schiff warned.

Schiff often drew the ire of Trump, who mocked him at his campaign rallies and at White House events. McCarthy has suggested that Schiff will lose his intelligence panel seat if Republicans win the majority in November, a retaliatory move that would follow the Democrats stripping Reps. Marjorie Taylor Greene and Paul Gosar of their committee assignments for their inflammatory rhetoric.

Schiff’s experience as a federal prosecutor shows in his ability to frame issues and go toe-to-toe with the Republicans rhetorically. He is a confidant of Pelosi and is sometimes mentioned as her possible replacement should she step down. He could also someday run for a statewide office such as governor or senator.

Luria is serving her second term in office and faces stiff competition for a third in a district that leans Republican. She announced her reelection bid on the first anniversary of the insurrection, 1:46 p.m. to be exact, timed to match when she was being evacuated from her office. She said that the nation was at a crossroads and that Americans “must defend our democracy against forces that seek its destruction.”

Luria is a 20-year Navy veteran whose district is home to a huge number of military personnel and veterans. She has not shied from her work on the Jan. 6 panel but also doesn’t brandish it. Her press releases, tweets and floor statements emphasize efforts to boost defense spending and her support for a $1 trillion infrastructure bill. She also highlights efforts to work across party lines and touted coming in at No. 26 on one scorekeeper’s rankings of bipartisanship in the House.

The top Republican challengers hoping to win the right to face her in November are also emphasizing issues other than her work on the Jan. 6 investigations, so it doesn’t appear to be a front-burner issue in the race — for now.

Raskin has emerged as one of the panel’s leading voices after serving as the lead House manager in Trump’s second Senate impeachment trial. He has promised startling revelations in the upcoming hearings. “People need to understand how close we came to losing everything on Jan. 6 with both an inside effort at a political coup and an outside effort to violently overthrow the peaceful transfer of power,” he said.

Raskin served as a constitutional law professor at American University’s Washington College of Law for more than 25 years. He is a prolific writer who published a memoir about the insurrection, the subsequent impeachment trial and dealing with his son’s death. The siege of the Capitol came just days after Raskin’s 25-year-old son, Tommy, took his own life.

The Maryland Democrat is just in his third term in office and has already assured himself a leading role on legal issues before the House Judiciary Committee in the years ahead.

Lofgren is chairwoman of the Committee on House Administration, which has oversight of the U.S. Capitol Police. She has been a member of the House since 1995 and is an immigration attorney and immigration law professor who participated in the impeachment process for three presidents — Trump, Bill Clinton and Richard Nixon, the latter as a congressional staffer.

She said making the Capitol safer is not a substitute for determining what led to the attack on Jan. 6, 2021. She said: “Who paid for it? How was it organized? We need to find that out to keep the country safe.”