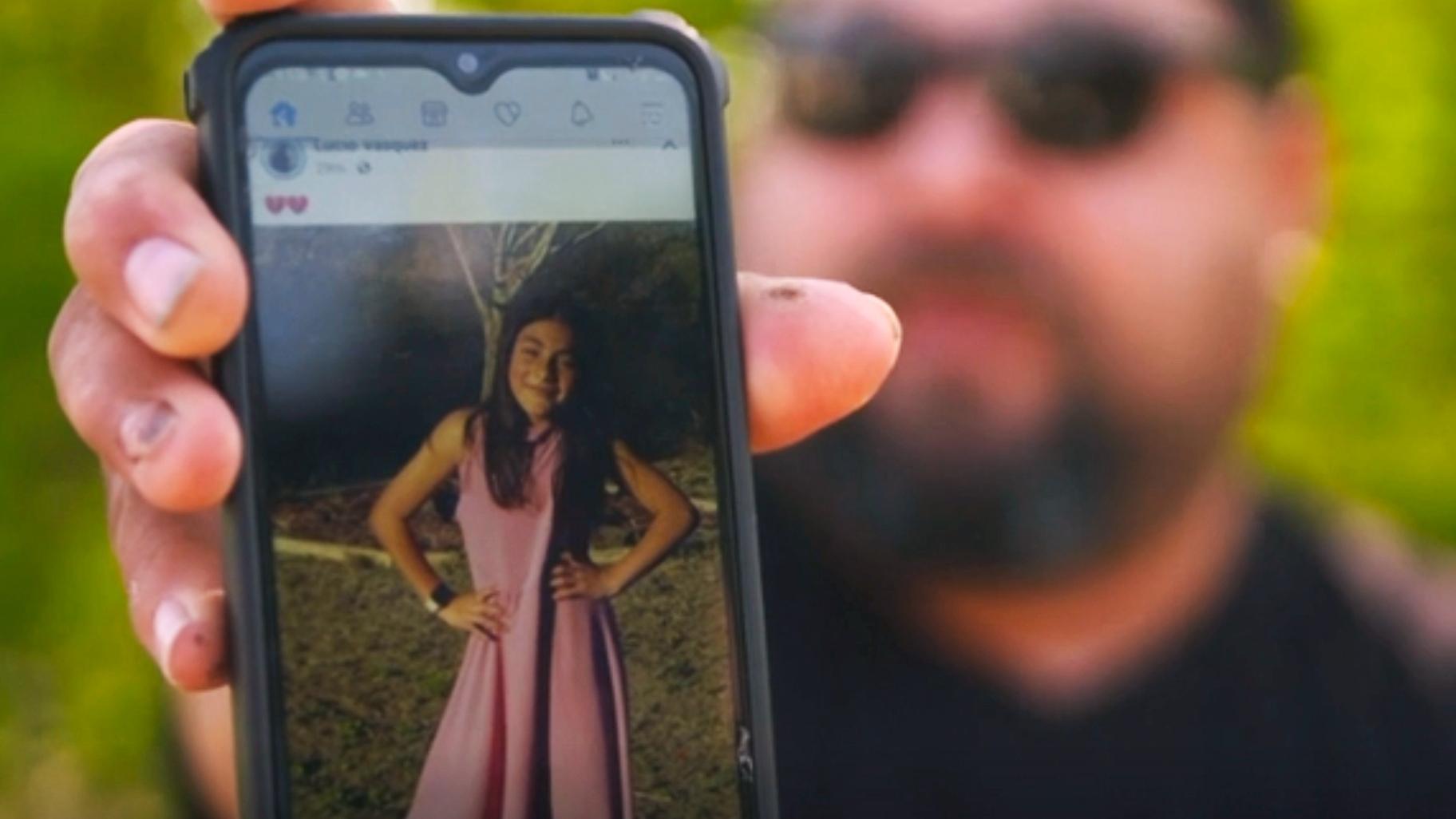 In this image from video, Javier Cazares shows a picture of his daughter, Jackie Cazares, Thursday, May 26, 2022, in Uvalde, Texas. Jackie, 9, was among the 19 children and two teachers killed during a mass shooting at Robb Elementary School on Tuesday. (AP Photo / Robert Bumsted)

UVALDE, Texas (AP) — Javier Cazares raced to his daughter’s school when he heard there was a shooting, leaving his truck running with the door open as he ran into the school yard. In his rush, he didn’t bring his gun.

He spent the next 35 to 45 agonizing minutes scanning the children fleeing Robb Elementary School for his 9-year-old “firecracker,” Jacklyn. All the while, he yearned to run in himself — and grew increasingly agitated, along with other parents, that the police weren’t doing more to stop the teenage gunman who holed up in a classroom, killing kids.

“A lot of us were arguing with the police, ‘You all need to go in there. You all need to do your jobs,’” said Cazares, an Army veteran. “We were ready to go to work and rush in.”

Nineteen children and two teachers were ultimately shot dead in the roughly 80 minutes the gunman spent inside the school in Uvalde, Texas, a small, predominantly Latino community that sits among vegetable fields halfway between San Antonio and the U.S.-Mexico border.

This account of the deadliest school shooting since Sandy Hook is based on law enforcement’s timeline, records and numerous interviews with Uvalde residents in the hours and days after the massacre.

Salvador Ramos was up early on May 24, sending ominous messages. The man authorities have identified as the gunman turned 18 the week before and promptly bought two AR-15-style rifles along with hundreds of rounds of ammunition.

In the pre-dawn hours in his grandparents’ shaded neighborhood just a half-mile from the site he would turn into a killing ground, Ramos wrote “I’m about to” to a woman over Instagram and sent someone a private Facebook message saying he was going to shoot his grandmother.

Within hours, he’d done it.

Sometime after 11 a.m., a neighbor who was in his yard heard a shot and looked up to see Ramos run out the front door of his grandparents’ home to a pickup truck parked along the narrow street. The 18-year-old seemed panicked and struggled to get the Ford out of park, Gilbert Gallegos, 82, said.

Ramos finally drove off, kicking a spray of gravel in the air. Moments later, his grandmother emerged from the single-story home covered in blood.

“This is what he did,” Gallegos recalled her yelling. “He shot me.”

Gallegos’ wife called 911 while he took the wounded woman into their backyard. As they hid and waited for the police, more gunshots rang out.

By 11:28 a.m., Ramos had sped to Robb Elementary and crashed the pickup in a drainage ditch, authorities said. At that moment, video shows a teacher entering the school through a door that the teacher had emerged from and propped open a minute earlier.

That door was usually closed, and locked, per security protocol. But it stayed ajar.

Witnesses said Ramos jumped from the passenger side of the truck with a rifle and a backpack full of ammunition. After shooting at two men who emerged from a nearby funeral home, Ramos hopped a chain-link fence and headed toward the school — still shooting — as panicked people nearby called the police.

Authorities initially said Ramos exchanged fire with a school police officer before entering the building, but they later said the officer was not actually on campus and “sped” back upon hearing of the shooter.

But the officer initially headed for the wrong man, confronting someone who turned out to be a teacher — after passing within feet of Ramos, who was crouched behind a vehicle parked outside the school.

From his hiding place, Ramos went for the propped-open door, slipped through it and into adjoining fourth-grade classrooms at 11:33 a.m., authorities said. He rapidly fired off more than 100 rounds.

In one of those rooms, Miah Cerrillo, 11, covered herself with a friend’s blood to look dead, she told CNN. After the shooter moved into the adjacent room, she could hear screams, more gunfire and music being blared by the gunman.

Two minutes after Ramos entered the school, three police officers followed him through the same door and were quickly joined by four more. Authorities said Ramos exchanged fire from the classroom with the officers in the hallway and two of them suffered “grazing wounds.”

The first police on the scene were outgunned by Ramos’ powerful, high-end rifle, according to a man who watched from a nearby home.

“After he started firing at the cops, the cops stopped shooting,” said Juan Carranza, 24. “You could tell the firepower that he had was more powerful than the cops’ weapons.”

After shots started ringing out, a cafeteria worker who had just finished serving chicken tacos to 75 third-graders said a woman shouted into the lunchroom: “Code black. This is not a drill!”

The employees didn’t know what “code black” meant but closed blinds, locked the doors and escorted students behind a stage, said the worker, who spoke on condition of anonymity to avoid publicity. Some staff then took refuge in the kitchen.

In the nearly half-hour after the first officers followed Ramos inside, as many as 19 piled into the hallway, authorities said.

In the meantime, students and teachers elsewhere in the building were trying to get out, some climbing out of windows with the help of police.

Cazares isn’t sure exactly when he arrived on the scene, but when he did, he saw about five officers helping people escape. He kept a close watch to see if Jacklyn, who he later said loved gymnastics, singing and dancing, was among them.

About 15 to 20 minutes after he got to the school, he said he spotted officers arriving with heavy shields for the first time.

In the chaos, he felt that time was both “going so fast and it was was going so slow.”

But he added: “From what I saw, things could have been a lot different.”

Other parents felt the same. One onlooker recalled a woman yelling at officers, “Go in there! Go in there!”

At 12:03, a student called 911 and whispered that she was inside the classroom with the gunman.

Minutes later, the Uvalde school district posted on Facebook that all campuses were going into lockdown but that “the students and staff are safe in the buildings. The buildings are secure.”

The student called 911 again, minutes after her first call, to say there were multiple dead, and then called back soon after that, saying eight or nine students were still alive.

Thirty-four minutes passed from the time of that last call to the moment a U.S. Border Patrol tactical team used a school employee’s key to unlock the classroom door and kill the gunman.

An open door had let him in. A locked door kept him in, and law enforcement out.

Police didn’t breach the classroom faster because the commander inside the building — the school district’s police chief, Pete Arredondo — believed the situation had morphed from an active shooting to a hostage situation, said Steven McCraw, the head of the Texas Department of Public Safety.

Officers from other agencies urged the school police chief to let them move in because children were in danger, according to two law enforcement officials who spoke on condition of anonymity because they had not been authorized to discuss the investigation publicly. McCraw said gunfire was “sporadic” for much of the time that officers waited in the hallway and that investigators do not know if children died during that time.

“It was the wrong decision,” McCraw said.

Arredondo could not be reached for comment. No one answered the door at his home Friday, and he did not reply to a phone message left at the district’s police headquarters.

The loss of so many young lives and the admission of errors by police have cast doubt, even for some Second Amendment-supporters in the Texas community, on a refrain the state’s Republican leaders have used after this and other mass shootings: “What stops armed bad guys is armed good guys.”

Cazares, a gun owner and supporter of the Second Amendment, said he shies away from politics — but added that he thinks there should be stricter gun laws, including better background checks. He called selling the type of gun the assailant used to an 18-year-old “kind of ridiculous.”

Cazares left school before officers killed Ramos at 12:50 p.m. He rushed to the hospital because his niece said she’d seen Jacklyn in an ambulance.

The entire family soon gathered there, pressing hospital staff for information for nearly three hours. Finally, a pastor, police officer and a doctor met with them.

When he was finally able to see his daughter’s body, Cazares vowed that her death would not be in vain.

Later, he fought back tears as he pondered his daughter’s last moments.

“She could be feisty,” he said. “It kind of comforts our hearts that she would be one of the ones that was brave and tried to help as much as she could.”