Construction of Carvana’s controversial 14-story car vending tower in Skokie, approved just three months ago by the Village Board of Trustees despite widespread community opposition, is now on hold due to the temporary suspension of Carvana’s dealer’s license in Illinois.

The village notified Carvana officials via letter that no construction or building permit submissions related to the tower would be reviewed, discussed or approved until the license issue is resolved with the state.

“We instruct that you do not proceed with any work on the site and that you make no further submissions or have any further contact with the Village of Skokie Building Department until such time as I inform you that you may contact the Department again,” wrote Michael Lorge, corporate counsel for the village.

A spokesperson for the village confirmed that Carvana has yet to break ground on the site. Carvana did not immediately respond to a request for comment.

The Illinois secretary of state’s office suspended Carvana’s dealer’s license for misuse of issuing out-of-state temporary registration permits and for failing to transfer titles, according to Henry Haupt, a spokesman for the department.

During contentious community meetings regarding Carvana’s proposed tower, described as a “glass display case for cars,” residents had raised concerns about similar suspensions in other states and also cast doubt on the company’s business model.

“All the warning lights were blinking red from the jump,” said Robert Kusel, a Skokie resident who sounded the alarm about the tower’s location across from the Harms Woods forest preserve and the building’s potential for bird collisions.

Though village trustees ultimately approved Carvana’s site plan, they hedged their bet with a stipulation requiring Carvana to post a $200,000 bond in the event the building is abandoned and demolition is required. 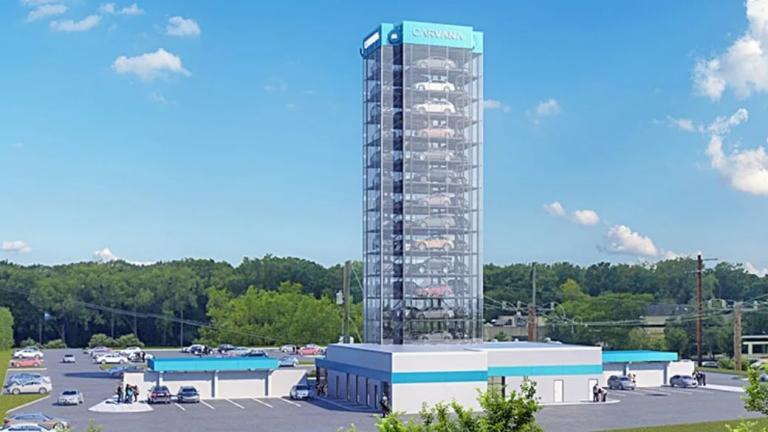 Carvana Back in Hot Water With State of Illinois, License Suspension Reinstated

Carvana Tower Gets Final Approval From Skokie Board Despite Widespread Objections