City Council members and residents are scrambling to figure out more about plans to move a giant temporary Chicago casino into the historic Medinah Temple.

It’s located in the heart of the fashionable River North neighborhood, home to tourism, commerce, and lots of residential units. Mayor Lori Lightfoot has signaled she wants a vote on this giant casino plan, which includes the temporary spot, in less than two weeks.

A snapshot of residents in the area says the initial returns on that temporary casino proposal at Medinah Temple are a thumbs-down.

The River North Residents Association launched a public survey April 6 and since then, more than 2,600 people have responded, and about 87% of respondents have been against the idea.

They are worried it will bring unwanted traffic and commotion to the area, and the city has not yet presented any plan to mitigate it.

“The Medinah Temple location is a terrible idea,” said Brian Israel, president of the River North Residents Association. “We think it’s very ill-suited. It’s a wonderful piece of architecture. We love the building and want to see something wonderful down there. It should be a theater, or it should be restaurants, retail — some kind of cultural institution. A casino is about the worst use you can imagine for that iconic building. That’s a heavy commercial district, a lot of tourist traffic there, there’s obviously a lot of pedestrian traffic.”

The Medinah Temple is a historic building. It housed a Bloomingdale’s department store from 2000 to just recently when it left in 2020. It now sits vacant. 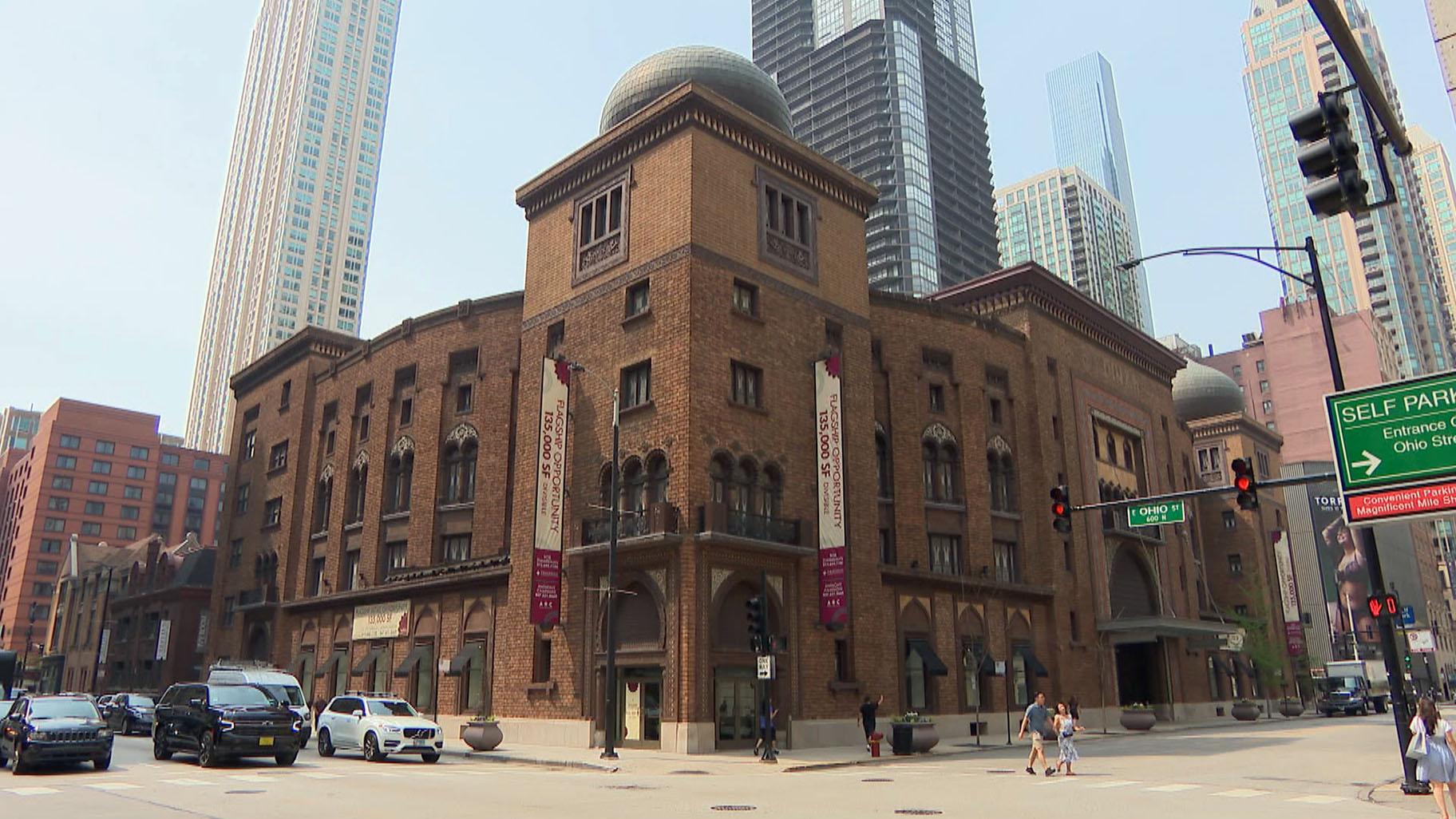 City Council members and residents are scrambling to figure out more about plans to move a giant temporary Chicago casino into the historic Medinah Temple. (WTTW News)

The Moorish architecture of the place goes back over a century– it was constructed in 1912 and the interior theater was one of the most sought-after acoustic rooms in the world. The Chicago Symphony Orchestra made many recordings in the building, and the soundtrack for Disney’s Fantasia 2000 was done there as well.

When the final permanent casino goes in River West, if approved, it means 3,400 new slots and nearly 200 table games.

With that comes the added threat of gambling addiction, but Elizabeth Thielen, certified Problem and Compulsive Gambling Counselor and the person who oversees gambling services at Nicasa Behavioral Health Services says Illinois has greatly increased treatment options in recent years.

“The state has worked really hard to expand the treatment options,” Thielen said. “We went from having six or seven treatment providers in the whole state to 30 different programs. We have many certified gambling counselors and it’s growing. There’s also Telehealth available. If someone needs help and there’s no agency near them, a place like us or other places providing telehealth services can work with them from the comfort of their own home.”

Some of the owners of local restaurants and entertainment establishments are trying to keep an open-mind about a short-term casino nearby.

Untitled Supper Club is known for its casino-like stage shows, and its general manager says it’s hard to know what to expect.

Similarly, Sam Sanchez, chairman of the Illinois Restaurant Association, and the owner of Moe’s Cantina, says having a temporary casino nearby could help drive business through tourism.

“We’re hoping to draw in more tourists, we really are,” Sanchez said. “New casino coming in, definitely going to keep a lot of people in the city. We’re not going to lose them to Des Plaines, Indiana … we’re going to keep them here. There’s so many people in Chicago, it’s sharing [with other businesses].”

Sanchez added that “there’s traffic every day,” with or without a casino.

Amid all of this, River North has struggled with a rise in crime, since the onset of COVID-19, especially suffering two mass looting events in the summer of 2020, and a recent string of attempted robberies at nearby subway stations.

Israel said the first four months of this year has seen higher than normal crime numbers across the board.

“Two-hundred-thirty motor vehicle thefts, 368 thefts, 75 burglaries, 55 aggravated batteries, 110 robberies, 76 criminal sexual assaults and 3 murders in the 18th District,” Israel listed. “Obviously, it’s a dreadful thing. People are very worried about it. There’s probably nothing more concerning and creates more fear and anxiety on the part of residents in our community than the increases in serious crimes over the years.”

Ald. Brendan Reilly of the 42nd Ward, including River North, has been a vociferous opponent of the Medinah plan and has likened it to another parking meter deal.

“There still hasn’t been a traffic study performed, no public safety analysis performed and that’s extraordinary because downtown Chicago, whenever we think of building a new high rise, there’s always a traffic study first to make sure the infrastructure in the surrounding neighborhood can support the new project,” Reilly said. “Something this important to the city — to not be supported with a traffic study already, sounds awfully strange to me.”