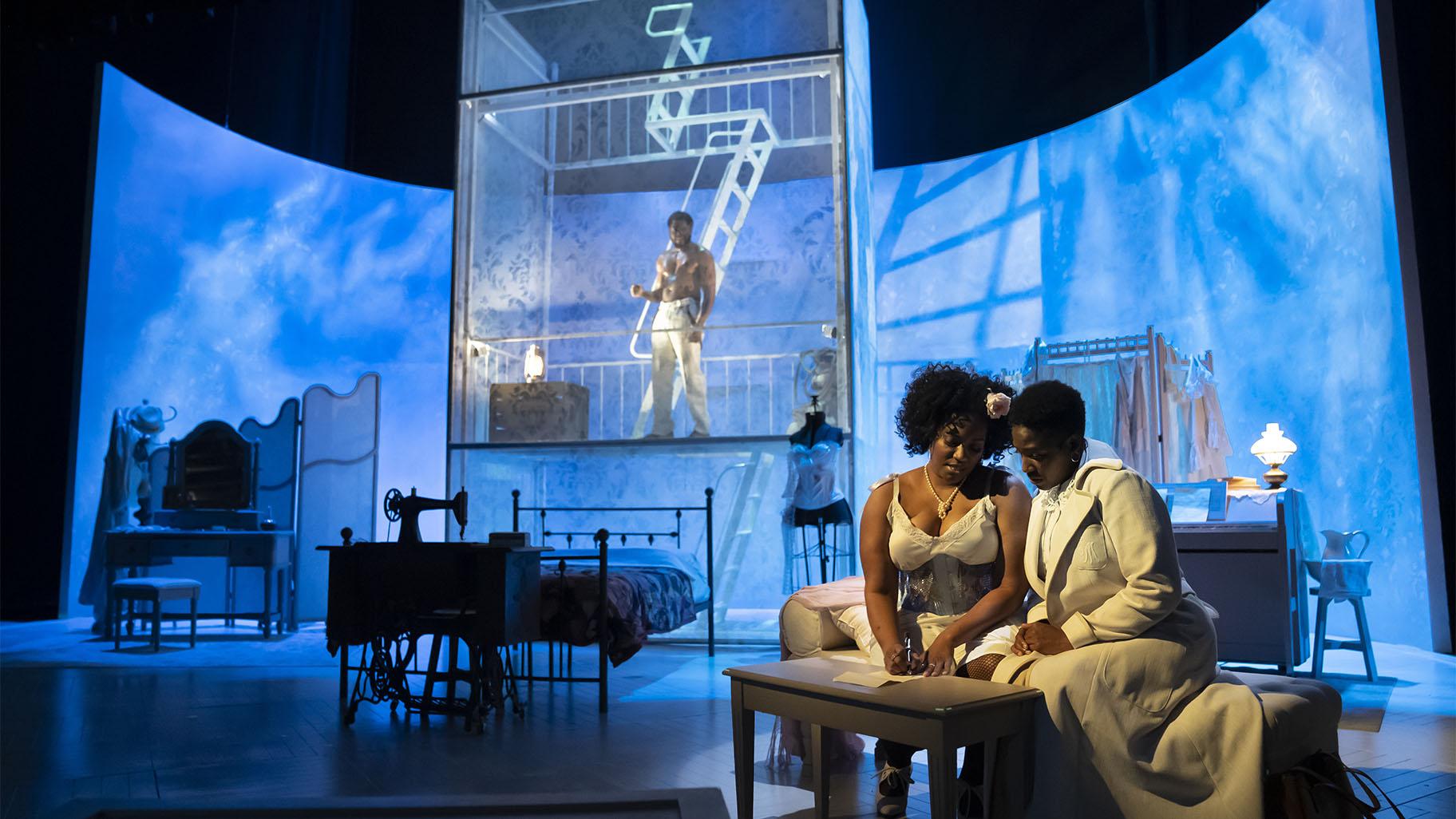 At the “Intimate Apparel’s” center is Esther (Mildred Marie Langford), a gifted seamstress, who fashions elaborate corsets for a wide range of women. (Credit: Liz Lauren)

Before going any further, a toast to Lynn Nottage, the Brooklyn-born playwright who has won countless prizes for her work, including two Pulitzers (for “Ruined” in 2009, and “Sweat” in 2017). She has just been nominated for two Tony Awards (for “Clyde’s,” which is already slated to open at the Goodman Theatre in September, and for the libretto for “MJ, The Musical”).

Among her many other works (each one impressively varied in setting and scope), there is “Mlima’s Tale,” a heartbreaking look at the savage murder of Africa’s elephants for their valuable tusks. It received a superb production by Chicago’s Griffin Theatre in Feb. 2020, and I will always remember it as being the last play I reviewed before the onslaught of the COVID-19 pandemic.

And then there is “Intimate Apparel,” Nottage’s heartbreaking 2003 work, whose initial production in Chicago many years ago has remained deeply ingrained in my memory. My admiration for the play was reawakened recently when I saw the Northlight Theatre production that will run for just one more week (through May 15). My advice is simply to catch it if you can, even if this play, deftly directed by Tasia A. Jones, is a work that thrives best in a more intimate setting than Northlight’s current North Shore Center home.

The time is 1905. The place is New York’s Lower East Side. And at the play’s center is Esther (in a deeply affecting, wholly believable performance by Mildred Marie Langford). A 35-year-old African American woman who was penniless when she moved to New York from the South at the age of 17. She is a gifted seamstress, and has been scrimping and saving all her life while fashioning elaborate corsets for a wide range of women — from Mrs. Van Buren (a fine turn by Rebecca Spence), the wealthy socialite locked in an unhappy marriage, to Mayme (a nightclub pianist who makes her living as a well-known prostitute, and is zestily played by Rashada Dawan). And both these women clearly feel safe when confiding in her. 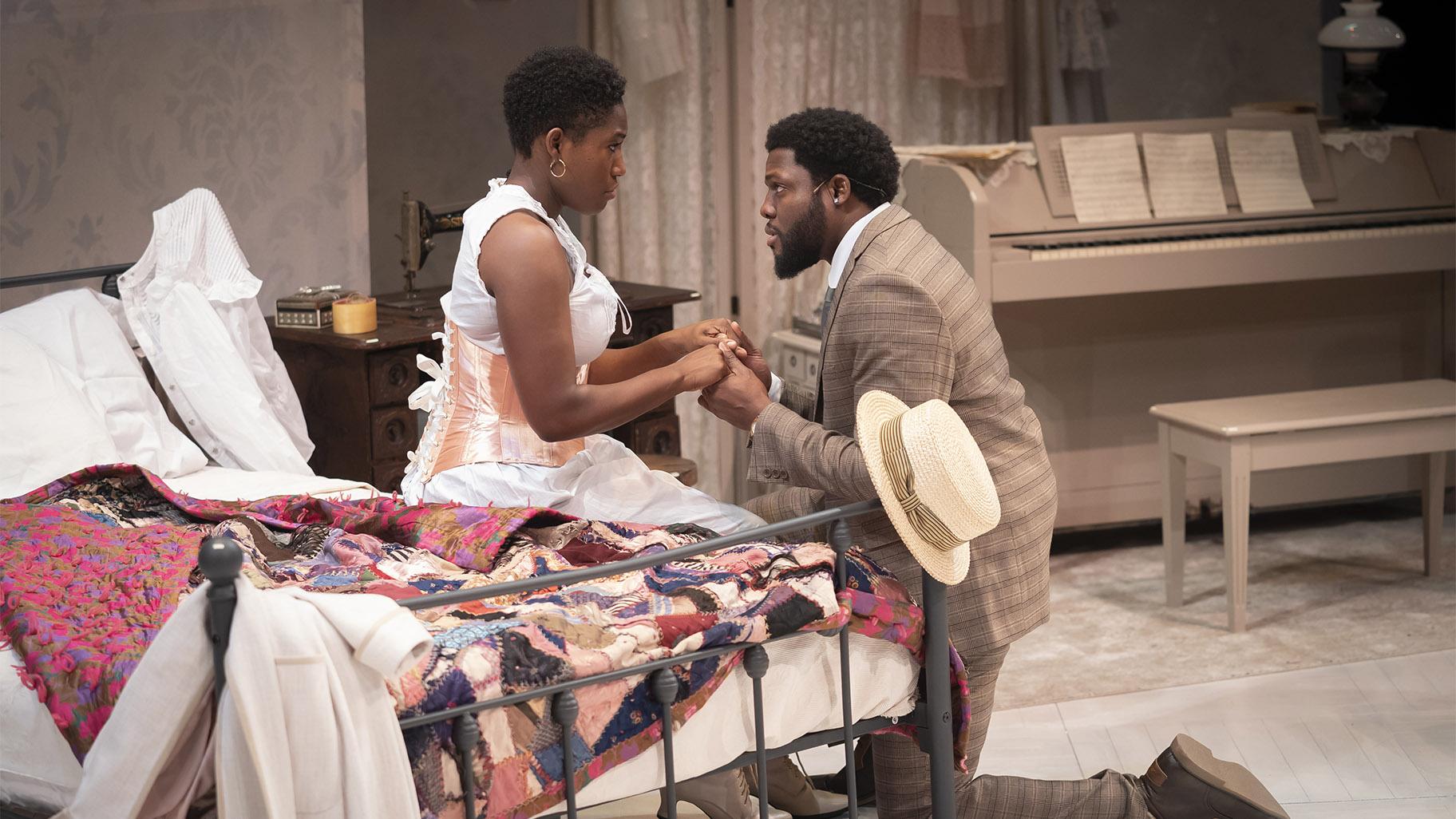 George (Yao Dogbe) is a Barbados-born laborer doing dangerous grunt work on the Panama Canal that is being built at the time. (Credit: Liz Lauren)

Esther lives and works in a room in a boarding house that is run by her no-nonsense, widowed landlady, Mrs. Dickson (the ever-feisty Felicia P. Fields), who actively encourages the virginal woman to marry before it’s too late. Then comes the arrival of gentlemanly, quite poetic letters from George (expertly played by Yao Dogbe at the performance I attended, but replaced this week by Al’Jaleel McGhee) that are an attempt to make romantic inroads with Esther.

George is a Barbados-born laborer doing dangerous grunt work on the Panama Canal that is being built at the time. An ambitious man (and, like Esther, illiterate), he has hired someone to pen these letters. After quite a bit of romantic persistence he arrives in New York, marries the sexually inhibited Esther, and soon reveals his true self as he strays from the bedroom and pressures Esther to give him all her years of savings — money she had planned to use for establishing her own salon. Not surprisingly, George proceeds to squander it all on horses and hookers, leaving her alone, and determined to start again from nothing.

But there is more, and it is at the true emotional core of Nottage’s play. For the real love story here is between Esther and Mr. Marks (ideally played by the ever subtle but winning Sean Fortunato). An Orthodox Jewish immigrant from Eastern Europe, he owns the fabric store where Esther shops for the fine textiles used in her creations, and he is as shy and gentle in his way as Esther. These two people are an ideal match in many ways, although their union can never be realized. Yet their emotional connection is ideally embodied in a brief but unforgettable moment when she smooths the lush collar of a robe she has made and has him try it on. 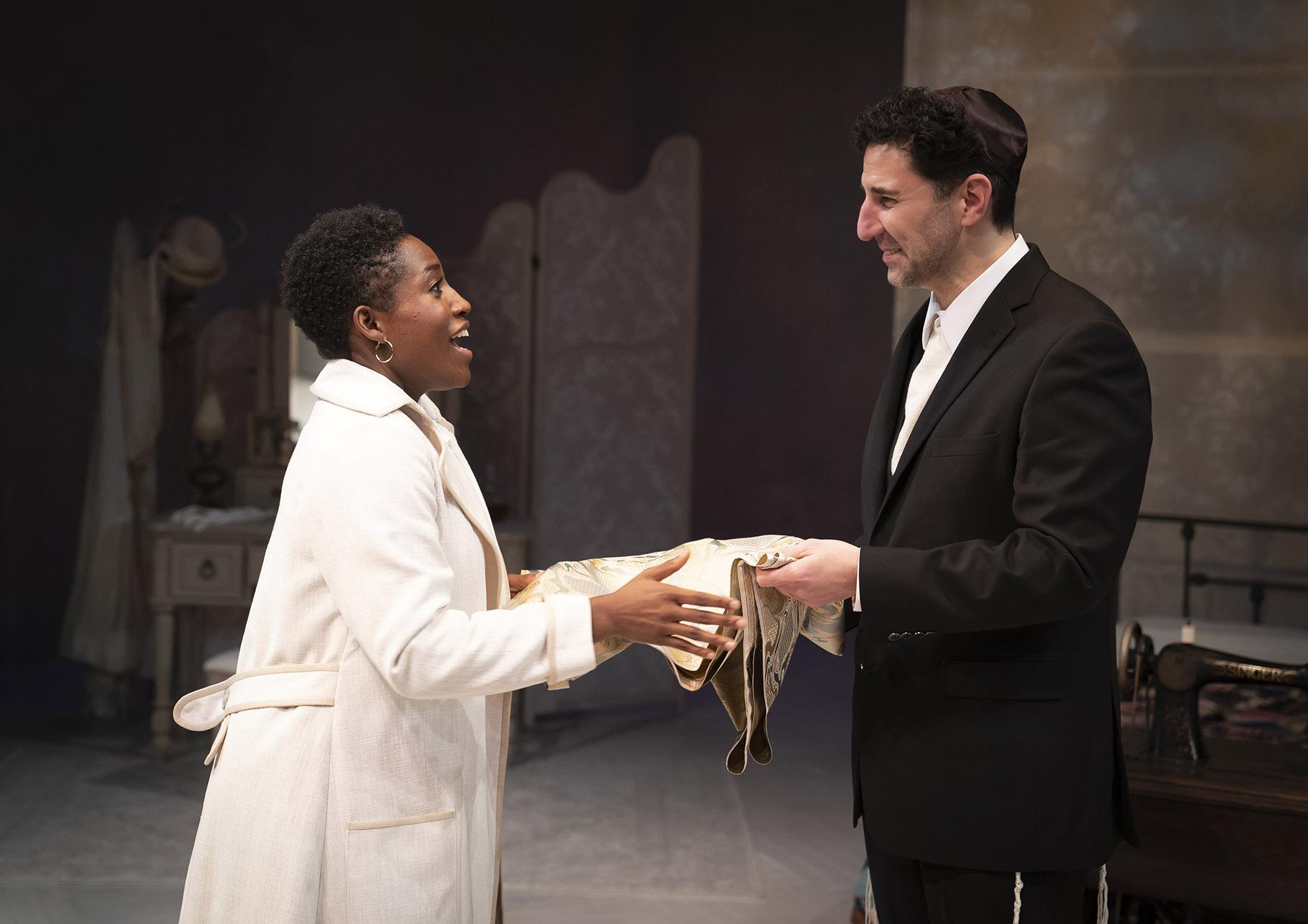 Throughout, Nottage explores the notion of intimacy in a multitude of ways, suggesting how different social classes, different ethnicities, and different sexes can connect, confide in, and also betray each other. Overall, a play as meticulously crafted as Esther’s creations.

If I had one issue with this production (with its multifaceted set by Scott Penner, lighting by Claire Chrzan and costumes by Raquel Adorno), it was its uneven sound that left some lines inaudible or garbled. I hope this has been corrected during the show’s run. But all in all, it is a relatively minor quibble about a play, and a production, that will seize your heart.