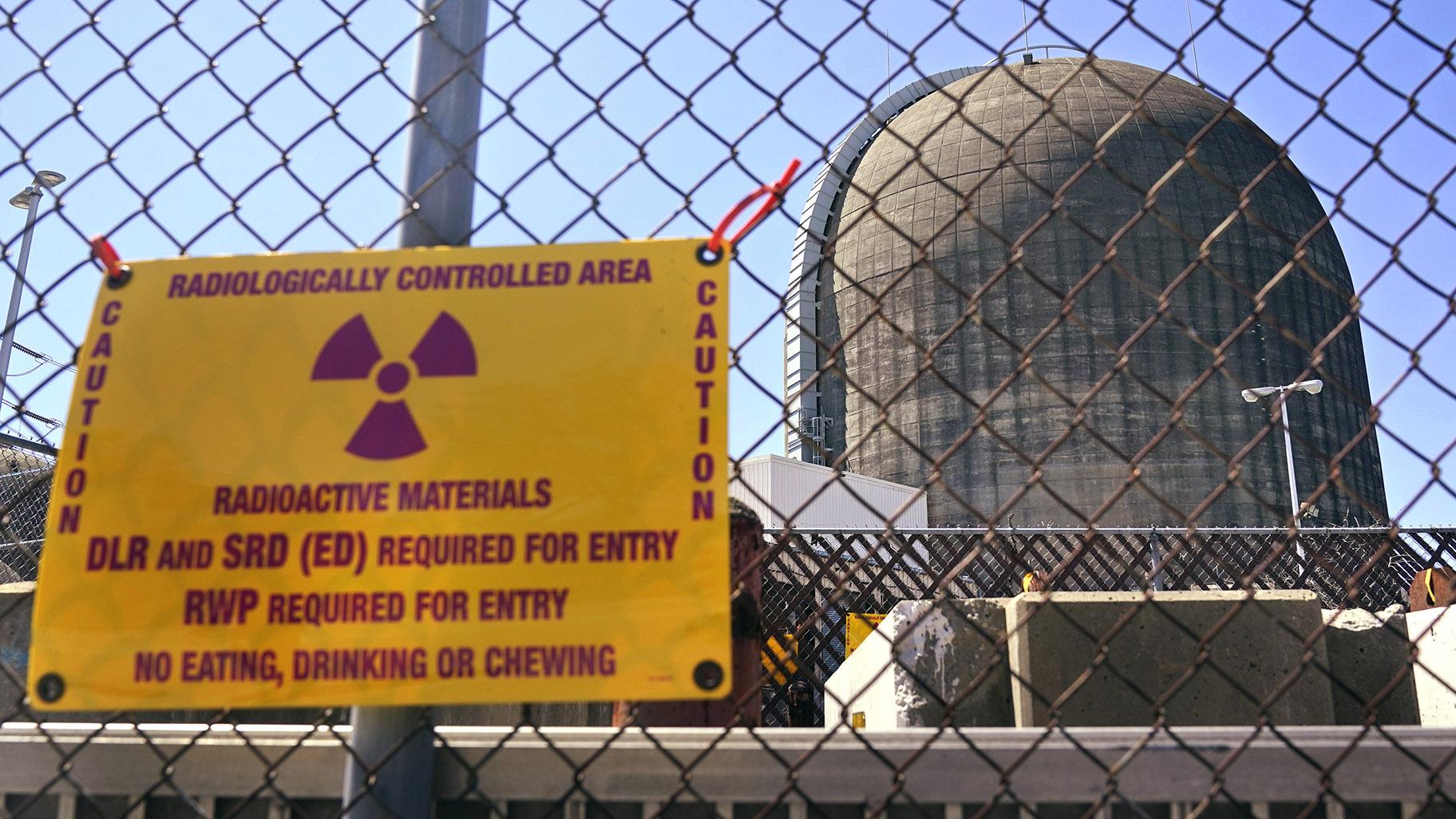 A sign warning of radioactive materials is seen on a fence around a nuclear reactor containment building on Monday, April 26, 2021, a few days before it stopped generating electricity at Indian Point Energy Center in Buchanan, N.Y. (AP Photo / Seth Wenig, File)

WASHINGTON (AP) — The Biden administration is launching a $6 billion effort to rescue nuclear power plants at risk of closing, citing the need to continue nuclear energy as a carbon-free source of power that helps to combat climate change.

A certification and bidding process opened Tuesday for a civil nuclear credit program that is intended to bail out financially distressed owners or operators of nuclear power reactors, the U.S. Department of Energy told The Associated Press exclusively, shortly before the official announcement. It’s the largest federal investment in saving financially distressed nuclear reactors.

Owners or operators of nuclear power reactors that are expected to shut down for economic reasons can apply for funding to avoid closing prematurely. The first round of awards will prioritize reactors that have already announced plans to close.

The second round will be opened up to more economically at-risk facilities. The program was funded through President Joe Biden’s $1 trillion infrastructure deal, which he signed into law in November.

“U.S. nuclear power plants contribute more than half of our carbon-free electricity, and President Biden is committed to keeping these plants active to reach our clean energy goals,” Energy Secretary Jennifer Granholm said in a statement. “We’re using every tool available to get this country powered by clean energy by 2035, and that includes prioritizing our existing nuclear fleet to allow for continued emissions-free electricity generation and economic stability for the communities leading this important work.”

A strong majority of states — about two-thirds — say nuclear, in one fashion or another, will help take the place of fossil fuels. A dozen U.S. commercial nuclear power reactors have closed in the past decade before their licenses expired, largely due to competition from cheaper natural gas, massive operating losses due to low electricity prices and escalating costs, or the cost of major repairs.

This has led to a rise in emissions in those regions, poorer air quality and the loss of thousands of high-paying jobs, dealing an economic blow to local communities, according to the DOE. A quarter or more of the fleet is at risk, the DOE added. The owners of seven currently operating reactors have already announced plans to retire them through 2025.

Most U.S. nuclear plants were built between 1970 and 1990 and it’s costing more to operate an aging fleet. The only nuclear plant under construction in the United States is in Georgia. Costs have ballooned and another delay was announced in February.

Twenty more reactors faced closure in the last decade before states stepped in to save them, according to the Nuclear Energy Institute, the industry’s trade association. Illinois is spending nearly $700 million to keep three plants open while additional renewable resources come online.

Low electricity prices are the main cause of this trend, though federal and state policies to boost wind and solar have contributed as well, the NEI added.

There are 55 commercial nuclear power plants with 93 nuclear reactors in 28 U.S. states. Nuclear power already provides about 20% of electricity in the U.S., or about half the nation’s carbon-free energy.

If reactors do close before their licenses expire, fossil fuel plants will likely fill the void and emissions will increase, which would be a substantial setback, said Andrew Griffith, acting assistant secretary for nuclear energy at DOE.

While natural gas may be cheaper, nuclear power hasn’t been given credit for its carbon-free contribution to the grid and that has caused nuclear plants to struggle financially, Griffith added.

David Schlissel, at the Ohio-based Institute for Energy Economics and Financial Analysis, said he wishes the federal government, before it allocated the $6 billion, had analyzed whether that money might have been better spent on ramping up renewables, battery storage and energy efficiency projects, which can be done quickly and cheaply to displace fossil fuels.

Now that the money is already set aside for nuclear plants, the federal tax credits for renewables should be extended and more should be invested in energy efficiency, he said, because the faster that’s done, the faster the nation reduces its dependence on fossil fuels and its emissions. Also, the nuclear plants are going to eventually retire, some sooner than later, so carbon-free sources of energy need to be in place for when they do, he added.

California is slated to close its last remaining nuclear power plant, Diablo Canyon, in 2025. Officials there think they can replace it with new solar, wind and battery storage resources, though skeptics have questioned whether California’s all-in renewable plan can work in a state of nearly 40 million people.

The Energy Department intends to accept annual applications for the civil nuclear credit program through fiscal 2031, or until the $6 billion runs out. Nuclear plant owners or operators can bid on credits for financial assistance to keep operating. To qualify, plant owners or operators have to show the reactors are projected to retire for economic reasons and emissions would increase. The department would also determine, with input from the U.S. Nuclear Regulatory Commission, that they can operate safely.

Maria Korsnick, president and chief executive officer of NEI, said she thinks the federal program will level the playing field for nuclear energy and help clear a path to pass even more intensive policies, such as a nuclear production tax credit proposed in Biden’s now-stalled Build Back Better plan.

Democrats have said they hope to resuscitate parts of the social and environmental package and win over voters weary of the two-year-old pandemic and coping with the worst inflation in decades.