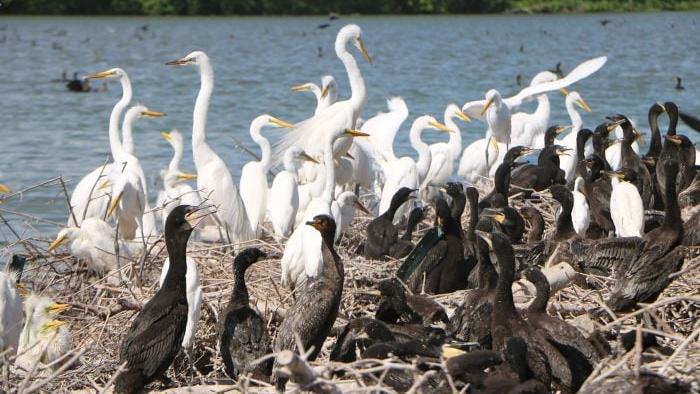 Great egrets and double-crested cormorants at the rookery in the middle of Baker's Lake. (Forest Preserve District of Cook County / Facebook)

(CNN) -- More than 200 birds have died from a presumed outbreak of avian flu at a Chicago-area forest preserve, according to authorities.

The deaths occurred at the Baker’s Lake forest preserve, the Forest Preserves of Cook County said in a statement on Thursday.

The federal government, which provides the only declaration of incidences of avian influenza, is conducting further tests to determine the cause of death.

The highly pathogenic avian influenza (HPAI) A(H5N1) virus is very contagious among birds and can be lethal in domestic poultry, according to the Centers for Disease Control and Prevention. However, it poses a low risk to the human population.

Zoos across the country have been moving their birds indoors over the past couple of months to protect them from the spread of the potentially deadly strain.

The Baker’s Lake preserve is home to one of the most significant heron rookeries in the Midwest, according to the Forest Preserves organization.

In addition, many other native and migratory birds nest and feed there. “Because of the nature of the local bird population, the avian influenza impact to date has only been observed among waterfowl and water birds,” the organization added.

Lab results showed the birds were suffering from a presumed outbreak of H5 avian influenza, it said.

Cases of avian flu have been rising in backyard flocks and wild birds across dozens of states in recent months.

The flu was first detected in February in a commercial turkey flock in Dubois County, Indiana, according to the U.S. Department of Agriculture. This was the first case of infection in the U.S. since 2020.