For decades, votes by the Chicago City Council have been tallied the old-fashioned way — with pen and paper.

But the yellow vote tally sheets used to record every vote from the sharply divided to the mundane with a flick of the pencil will officially be a relic of the past starting Wednesday, when City Clerk Anna Valencia fires up a cloud-based voting system that will let alderpeople cast their votes with a tap of a touchpad screen, and vault into the 21st century.

The public will get its first glimpse of the $3.5 million effort that began in 2017 to modernize the operations of the Chicago City Council at Wednesday’s meeting — as long as the network is willing, and the cloud does not crash.

The debut of the new voting system is a high-profile test for City Clerk Anna Valencia, who is running for the Democratic nomination in the race to replace retiring Secretary of State Jesse White. She faces former state Treasurer Alexi Giannoulias and Ald. David Moore (17th Ward) in the June contest.

“Change is not easy, but we have to change with the times,” Valencia said Monday, demonstrating the system for WTTW News. “We have to modernize the beacon of power.” 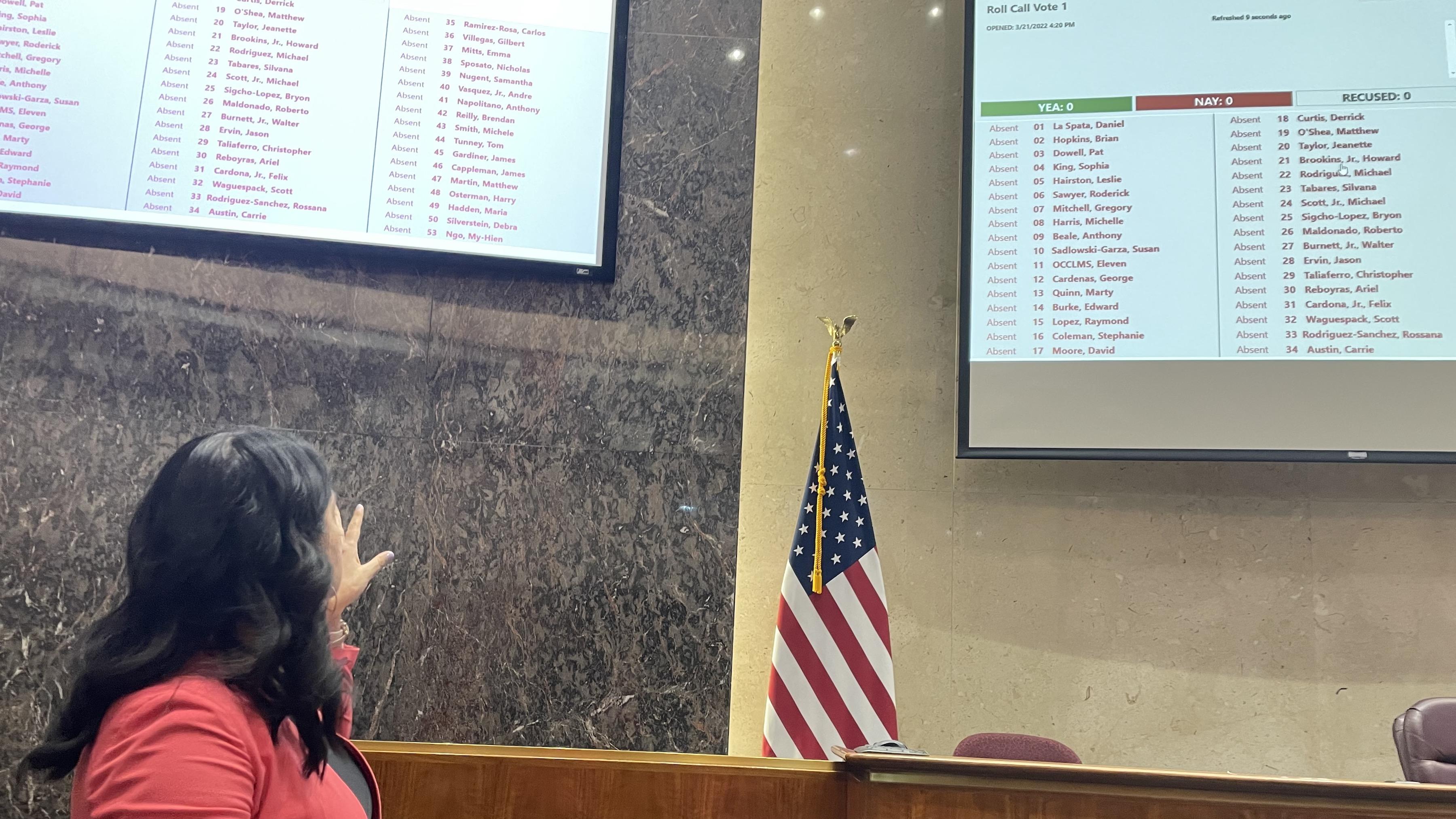 That system has undergone two months of testing and several dry runs with alderpeople to ensure all goes smoothly on Wednesday. But Valencia acknowledged last-minute problems could pop up, as they did on Monday while WTTW News observed the system.

Valencia acknowledged the success — or failure — of the new system rests in the hands of the alderpeople, some of whom still struggle to mute themselves during virtual meetings a full 24 months into the COVID-19 pandemic.

Each City Council member will have their own credentials to log on to the system created by Electronic Knowledge Interchange Chicago, a digital firm founded by Robert Blackwell Jr. The system was designed to be easy to use and should require no more technical skill than what is needed to check email, officials said.

The votes cast by alderpeople by tapping a green button for yes or a red button for no will be displayed on two newly installed massive digital screens in the Council Chambers, the first addition to the historic room since June 2017, when a court order required the City Council to allow members of the public to weigh in at the start of every meeting. A shot clock gives each speaker three minutes — before a loud buzzer brings their remarks to an end.

The vote tally will refresh every 10 seconds, giving members of the public and the news media a bird’s eye view of the process. Every other roll call vote in Chicago City Council history has been conducted by voice, with the clerk or their representative calling out each alderperson’s name and waiting for each person to audibly and intelligibly respond yay or nay.

Any member of the City Council can request a vote be held by voice, under the old system — a request that would have to be granted by Lightfoot or the presiding officer. A majority vote by the Chicago City Council could overturn that ruling.

Each digital voting page will describe what the issue is at hand — perhaps cutting down on the confusion that typically reigns amid procedural shenanigans that have become a hallmark of Mayor Lori Lightfoot’s tenure in office. 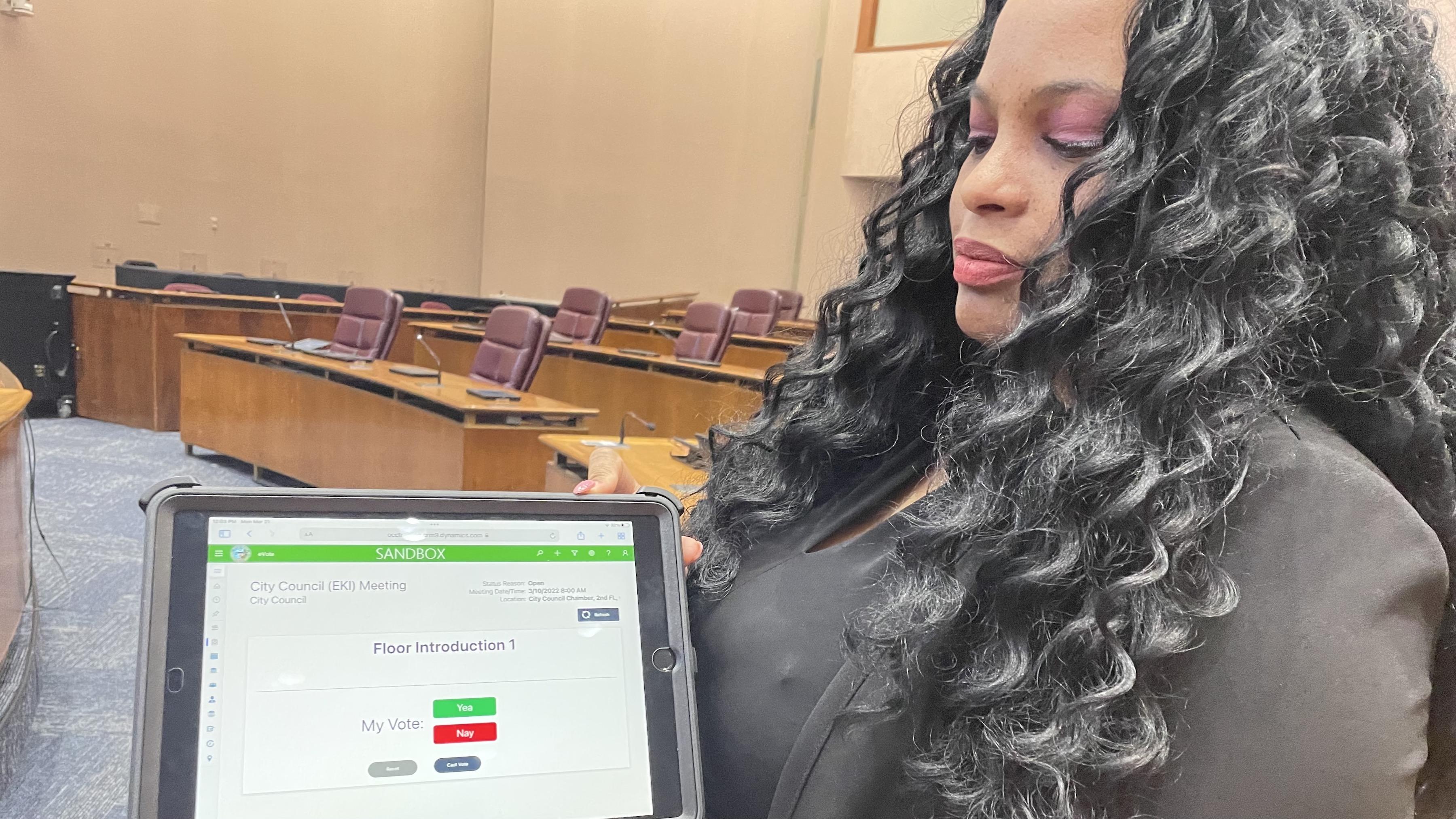 Members of the public should be able to see — at a glance, in real time — how alderpeople have voted on a given issue, and be able to find that tally easily on the clerk’s website when researching an issue, Valencia said.

“We need to be more transparent,” Valencia said. “We have to encourage trust in what we do. That will increase civic engagement.”

The need to rethink the City Council’s old-school, paper-based traditions became increasingly clear during the COVID-19 pandemic, which forced the City Council and the City Clerk to operate remotely from April 2020 to April 2021.

“The pandemic made it clear, we need a more streamlined system,” Valencia said.

With the first phase of the modernization project nearly complete, the clerk’s office will start on the second phase of the effort this summer, which will allow alderpeople to digitally co-sponsor resolutions and ordinances.

The final phase of the effort will transition both the City Council and its committees to a fully paperless system as well as ensuring those who don’t speak English or have disabilities can access the City Council meetings and records, Valencia said.

Eventually, alderpeople will be able to vote electronically during committee hearings, Valencia said. Those meetings are still being held remotely because of the pandemic. 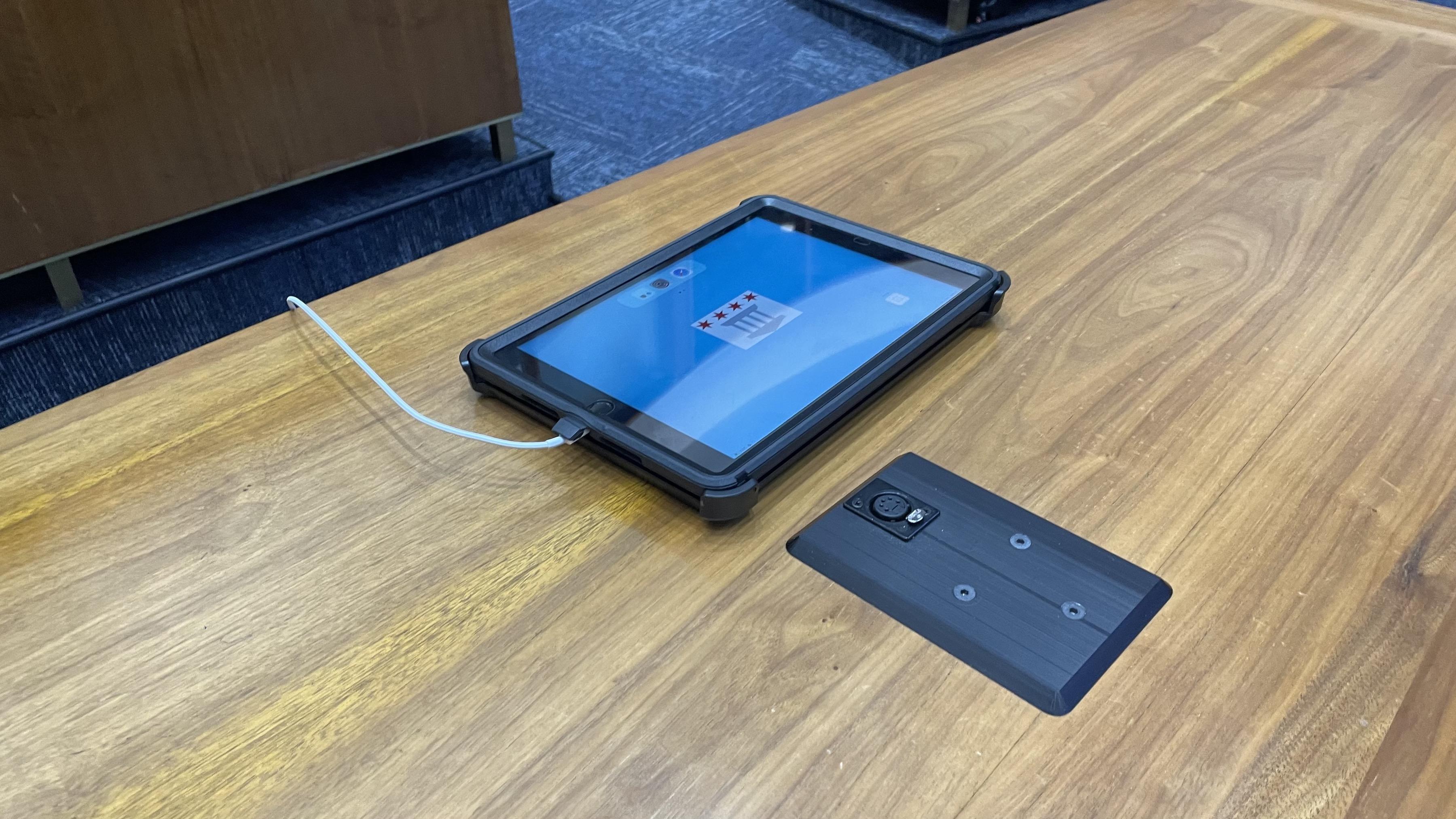 Members of the Chicago City Council will use these tablets to cast their votes electronically. (Heather Cherone/WTTW News)