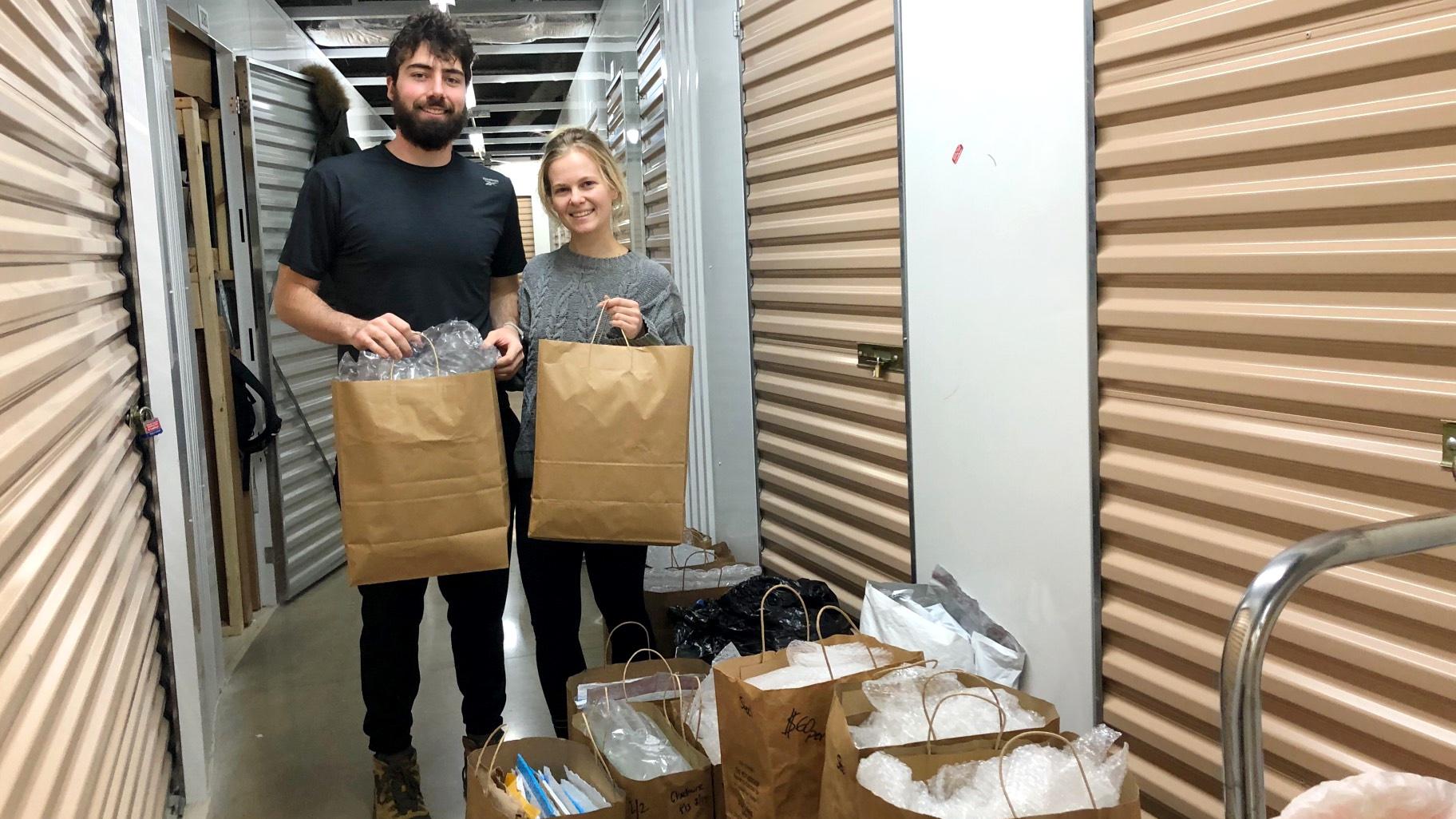 There’s something almost dystopian about the inside of a self-storage building, at once full, yet eerily empty, every corridor disorienting in its endless, sterile blank-walled sameness.

So it’s a bit of a shock to step off the elevator onto the third floor of one such place in Logan Square and meet a couple of living, breathing humans working to create a more sustainable future.

On a recent Thursday morning, entrepreneurs Aleksandra Plewa and Peter Proctor had turned the hallway outside their storage unit into a makeshift order fulfillment center, hustling to pull merchandise from their locker and bundle it into deliveries for customers.

Here, it turns out, is the de facto headquarters of EcoShip, a startup founded by Plewa and Proctor to tackle a pernicious source of waste: shipping materials.

Millions of packages arrive on doorsteps daily. So many boxes and mailers, ripped open and tossed aside along with packing peanuts, air packs, bubble wrap, padded envelopes, shredded paper and other byproducts. Some of it’s easily recyclable, a lot of it isn’t and plenty is destined for landfill.

These castoffs are EcoShip’s stock.

Plewa and Proctor collect items from people via a growing number of drop-off points and events, and then they redistribute them to small business owners, artisans, crafters and online resellers in need of said materials – for free.

In January alone, EcoShip kept 3,000 mailers out of landfill, Plewa said, and the company’s just getting started.

“The stuff is flying out the door,” said Proctor. 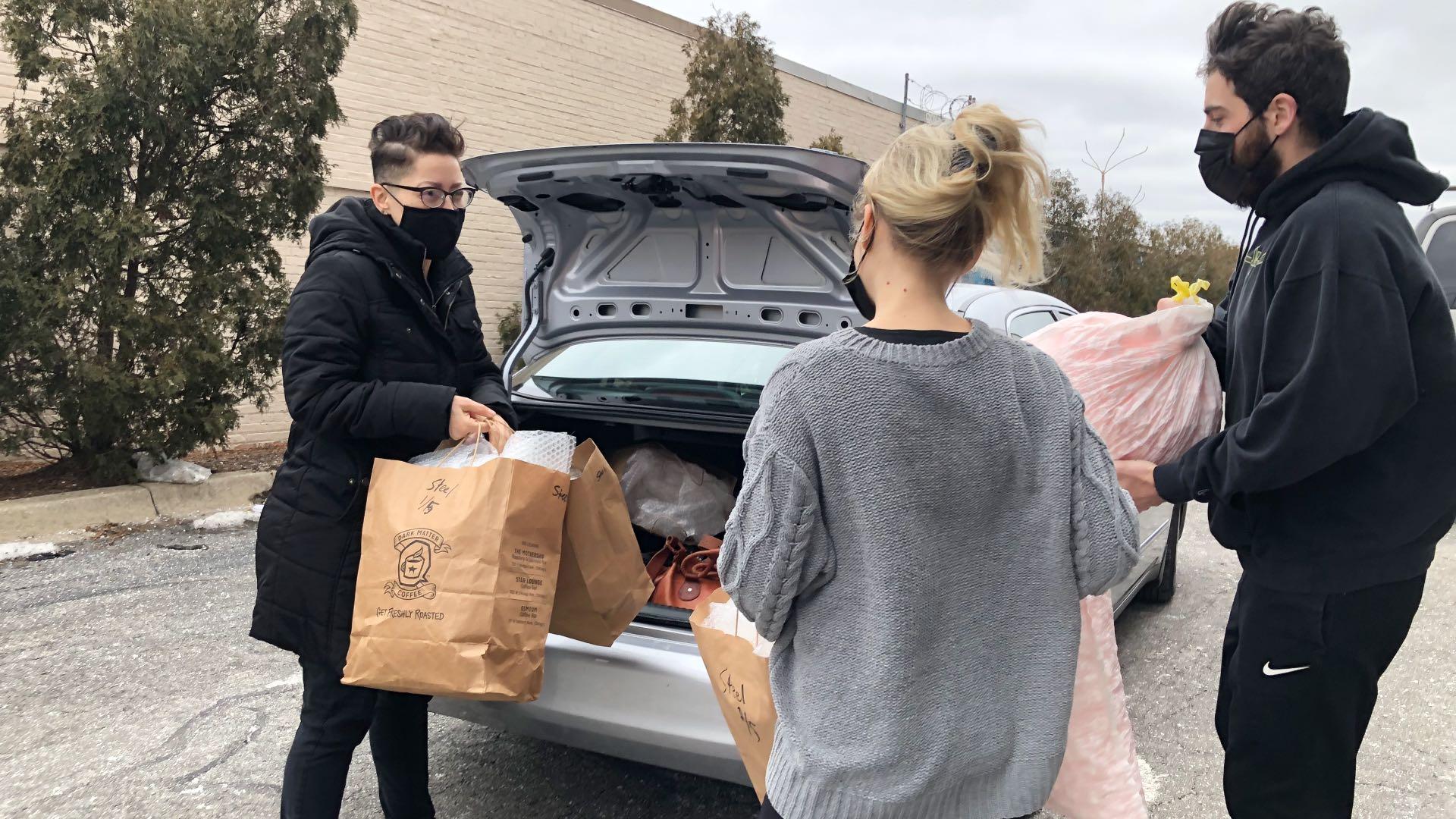 A handoff of supplies to an EcoShip customer. (Patty Wetli / WTTW News)

Plewa, 26, and Proctor, 25, didn’t set out to become foot soldiers in the “upcycling” movement.

The pair — who are partners at work and at home — grew up in different neighborhoods on Chicago’s Northwest Side, graduated a year apart from Lane Tech College Prep High School and went on to earn college degrees: biology, for her, and environmental science and business for him. Plewa had planned on a career in the lab, but discovered she wasn’t cut out for a life communing with petri dishes. Proctor was a tree technician until he ran the numbers and saw that the job, statistically speaking, put him at increased risk of losing a limb.

Proctor turned to online reselling while Plewa settled into a gig at a restaurant, keeping an eye out for something that would align with her interest in conservation and the environment and allow her to make a real impact. She found her calling while helping Proctor source shipping supplies for his venture.

“He was running low, so I reached out to a bunch of ‘buy nothing’ groups,” Plewa said, referring to a nook of the internet where people swap goods and services. “We had so many replies, it kind of grew into this idea of ‘What if we helped more businesses?’”

They started small, with mailers, then things snowballed to the point where EcoShip now trades in a wide range of hard-to-impossible-to-recycle materials, including those small drawstring bags often used to ship jewelry.

What they’ve stumbled onto is an untapped need from people on both sides of the shipping equation — those that send packages and those that receive them — with EcoShip stepping in to play matchmaker.

On one side are the small business owners and folks running side hustles out of their homes, who were already struggling to compete with larger retailers’ “free shipping” offers even before the cost of materials started rising.

“This can help level the playing field,” Proctor said.

Working with EcoShip is a “huge savings,” attested Kat Wisniewski, operations manager at Logan Square’s Steel Petal Press, which designs letterpress stationary and also maintains a small gift shop. But beyond the financial assist, she said, it also gives Steel Petal a chance to make a more eco-friendly business decision.

Shipping 30 to 40 orders a day, the company does think about its environmental footprint, and using recycled packing materials is one way to make a dent, Wisniewski said.

EcoShip’s other clients consist of consumers drowning in the waste of their purchases, like, say, a large box that’s 90% air packs and 10% product.

The burden too often falls on consumers to figure out how to deal with this trash, Proctor said, and trying to do the right thing can feel overwhelming. “People can get stuck in a cycle of inaction. ‘Do I recycle this? Do I throw it out?’”

People have rolled up to EcoShip’s drop-off events, Plewa said, with two to three years’ worth of shipping waste – stuff they couldn’t bring themselves to add to landfills and were holding onto in the hopes that someday there’d be a better way to unload the stuff. One woman was so determined to donate her stash to EcoShip, she didn’t let the lack of a car get in her way — she crammed it into an Uber.

“That people are willing to do this without any compensation is incredible,” said Plewa. “We had one person, she told her mom about us. And now her mom has her whole church group donating.”

There’s an “overwhelming sense of joy and relief” among people when they drop off items, Proctor said. “It really is a beautiful connection between people who are passionate about minimizing their impact on the environment.” 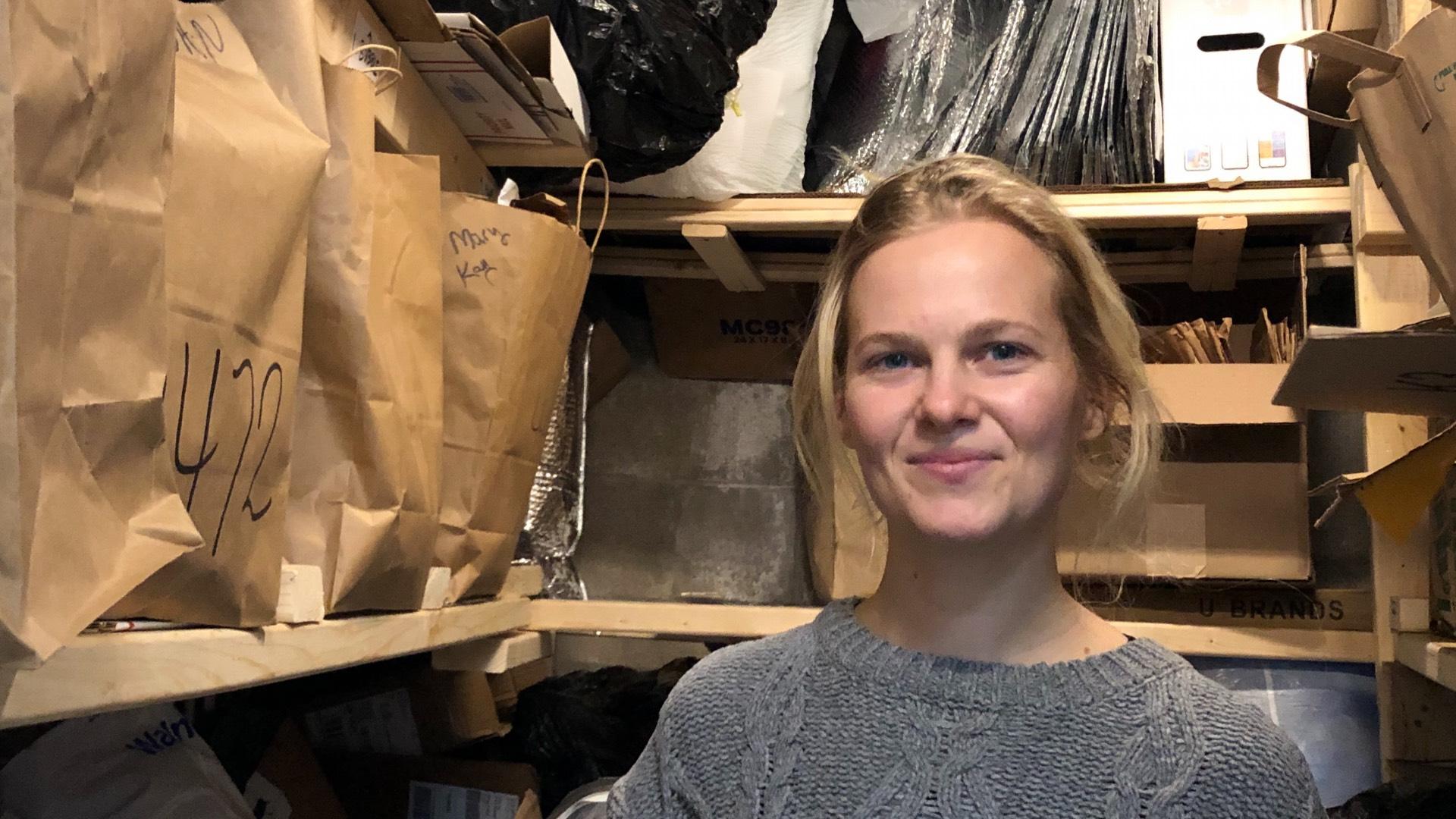 Aleksandra Plewa of EcoShip grew up in Jefferson Park, the daughter of Polish immigrants. She credits her mom for her recycling habits. "When I was growing up, we'd collect all our stuff and drop it off anywhere there was recycling. She really knew her stuff." (Patty Wetli / WTTW News)

Plewa recently quit her job to devote herself to the project full time and her goal is to set up EcoShip as a nonprofit eligible for grants and fundraising. Someday, she said, she’d love to have a storefront where people could come in and pick up the supplies they need and pay what they think is fair. And it would be great to connect with schools — Plewa envisions students competing to see who could bring in the most mailers — or to contract with larger companies and manage on-site EcoShip programs.

That’s the vision, but there’s a lot of work to be done first.

Though Proctor pitches in two or three days a week, helping bundle orders, EcoShip is largely Plewa’s baby and she’s growing it as quickly as a one-woman staff can.

“I have picked up so many skills,” Plewa said. “Now, I’m building a website.”

Among her priorities is increasing the number and accessibility of drop-off points. To date, most collection sites have been based at individual’s homes in a handful of neighborhoods. Plewa’s working not only to expand that network but to add businesses and is looking for ways to partner with other community sites, like the way libraries used to collect batteries.

Because she needs takers as well as givers, Plewa’s also reached out to local chambers of commerce and neighborhood organizations to spread the word to businesses about EcoShip’s services. Other avenues to raise EcoShip’s profile include participation in the Logan Square farmers market and the Northcenter Neighborhood Association’s pop-up recycling events.

Marketing alone could be a full-time job — Plewa also manages EcoShip’s social media pages — but she also has to bundle orders for customers and arrange pickups at the storage unit.

“There’s so much going on,” Plewa said. “It’s a good problem to have.”

The dream, she said, would be for EcoShip to become obsolete either because the materials it trades are banned outright or manufacturers take responsibility for recycling them. “This is all completely on large companies, until it affects their bottom line,” Plewa said.

Learn more about how to donate materials or receive them.

Tags:
made in Chicago
Recycling
Environment