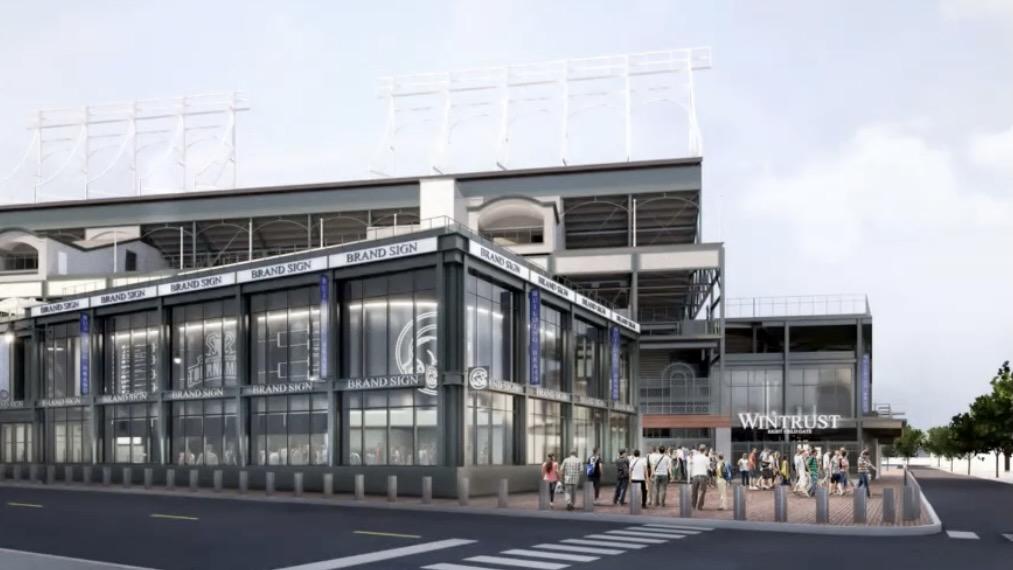 A rendering of the proposed two-story sports betting lounge at Addison Street and Sheffield Avenue next to Wrigley Field. (Provided) Five of Chicago’s professional sports teams would be allowed to let fans place bets at their home arenas and during games under a measure that advanced Monday despite concerns that it could kneecap long-delayed efforts to build a casino in Chicago.

A final vote is set for Wednesday’s full Chicago City Council on the measure that would impose a 2% tax on gross revenues from sports betting in Chicago. Those revenues are already subject to a 15% state tax and a 2% Cook County tax.

A full-court press from the owners of the Cubs, White Sox, Bulls and Blackhawks helped push the measure backed by Mayor Lori Lightfoot over the goal line at a joint session of the City Council’s Zoning and License committees despite the opposition of Chicago billionaire and Rivers Casino Des Plaines operator Neil Bluhm, whose Rush Street Gaming submitted two separate bids to build a casino-resort in Chicago.

Nine alderpeople voted against the measure, more than enough to block a vote on Wednesday. While Alds. Brendan Reilly (42nd Ward) and Michele Smith (43rd Ward) said they did not oppose the measure, they were not prepare to vote for it on such short notice and without allowing members of the public to review the plan.

Ald. David Moore (17th Ward) said he could not support it because it was not enough to include an “aspirational” goal for participation by firms owned by Black, Latino, Asian and female Chicagoans in the sportsbook’s construction and operations.

Alds. Anthony Beale (9th Ward) and Raymond Lopez (15th Ward) said they agreed with Bluhm that allowing the teams to operate sportsbook operations on their home turf would cannibalize revenue set to be generated by a Chicago casino.

“Don’t go for the okie dokie once again,” Beale urged his colleagues.

Bluhm said allowing sportsbook betting at Chicago stadiums and arenas could cost a future Chicago casino between $10 million and $12 million per year.

“Why take a chance like this?” Bluhm asked. “There’s a big risk with no reward.”

However, Huang Bennett said a study commissioned by the city by Union Gaming’s Grant Govertsen found sports betting lounges would have “no discernable impact on traditional revenues at a Chicago casino.”

“It is not a zero-sum game,” Huang Bennett said.

Cubs owner Tom Ricketts told alderpeople that the sports betting lounge at Wrigley Field would not be a casino or even a “mini-casino” but a sports bar and restaurant that would give diners a chance to place a bet on the action.

Each stadium could offer up to 15 kiosks, according to the proposal.

“Fans deserve the ability to be able to hear the crowds cheering while they place a bet,” said Ald. Walter Burnett (27th Ward), the lead sponsor of the measure who said he expects the sports betting lounge at the United Center to breathe new life into his West Side ward on days when there are no Bulls or Blackhawks games.

Bulls and White Sox owner Jerry Reinsdorf said he was perplexed by the controversy, telling alderpeople that Bluhm met with his team and proposed operating sportsbooks at Guaranteed Rate Field and the United Center after state lawmakers green lighted a casino in Chicago.

“At that time, he had no assurance he would be chosen to operate a casino in Chicago and was not concerned that these books would, in any way, cannibalize whoever was chosen to operate the casino. It makes me wonder if he had gotten his way back then, would we be having this meeting today?” Reinsdorf asked.

A representative of Bally’s said the firm had no objection to sports betting operations at Chicago sports stadiums.

Lightfoot announced Nov. 17 she supported legalizing sports betting lounges at pro-sports stadiums despite Bluhm’s opposition and concern that it will hurt a casino.

Lightfoot told reporters on Nov. 29 that she would not “allow something to move forward that felt like it was going to undermine that incredibly important opportunity” presented by a Chicago casino and said she relied on “facts and data” to reach that conclusion.