Crews Search for the Missing After Devastating Tornadoes 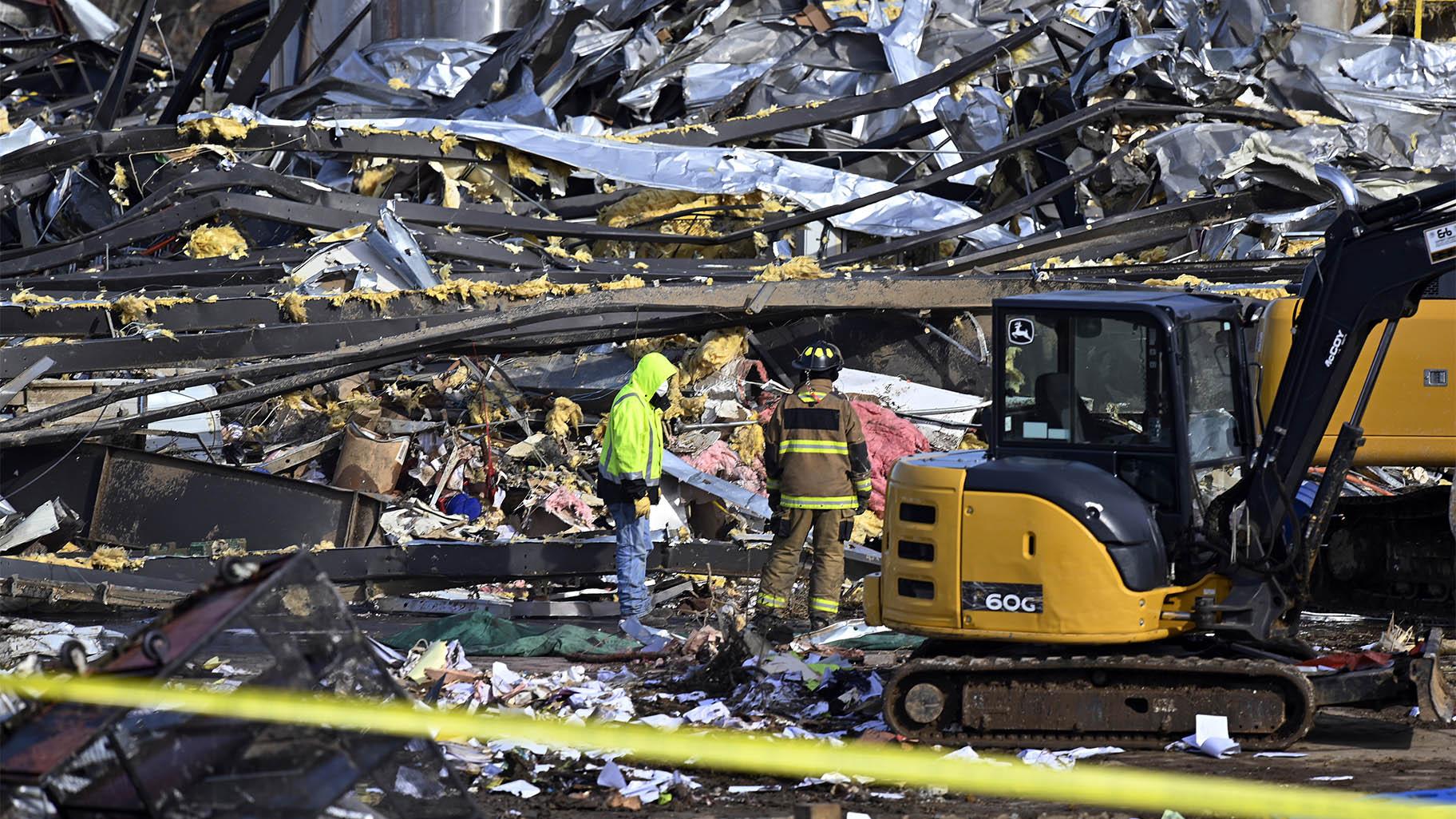 MAYFIELD, Ky. (AP) — Rescuers in an increasingly bleak search picked through the tornado-splintered ruins of homes and businesses Sunday, including a candle factory that was bustling with night-shift employees when it was flattened, as Kentucky’s governor warned the state’s death toll from the outbreak could top 100.

Factory workers sought refuge in what was supposed to be the safest part of the building, but it may not have mattered because the storm Friday night was so monstrous, Gov. Andy Beshear said. Authorities on Saturday reported rescuing 40 of 110 people in the building at the time, but hopes of finding anyone else alive dwindled rapidly.

“It’ll be a miracle if we pull anybody else out of that. It’s now 15 feet deep of steel and cars on top of where the roof was,” the governor said on CNN. “Just tough.’’

Jeremy Creason, Mayfield’s fire chief and emergency services director, said rescuers had to crawl over the dead to get to the living.

A nursing home and an Amazon distribution center also were smashed in other states in the unusual mid-December swarm of twisters.

“I can tell you from reports that I’ve received I know we’ve lost more than 80 Kentuckians. That number is going to exceed more than 100,” Beshear said on the Sunday morning talk shows.

“I’ve got towns that are gone, that are just, I mean gone. My dad’s hometown – half of it isn’t standing. It is hard for me to describe. I know people can see the visuals, but that goes on for 12 blocks or more in some of these places.”

He said that going door to door in search of victims is out of the question in the hard-hit areas: “There are no doors.”

The tornado that carved the path of destruction in Kentucky touched down for more than 200 miles (320 kilometers) in the state. Eleven people were reported killed in and around the city of Bowling Green.

If early reports are confirmed, the twister “will likely go down perhaps as one of the longest track violent tornadoes in United States history,” said Victor Gensini, a researcher on extreme weather at Northern Illinois University.

The storm was all the more remarkable because it came in December, when normally colder weather limits tornadoes.

The outbreak also killed at least six people in Illinois, where an Amazon facility in Edwardsville was hit; four in Tennessee; two in Arkansas, where a nursing home was destroyed; and two in Missouri.

Debris from destroyed buildings and shredded trees covered the ground in Mayfield, a city of about 10,000 in western Kentucky. Twisted sheet metal, downed power lines and wrecked vehicles lined the streets. Windows and roofs were blown off the buildings that were still standing.

The missing at the candle factory included Janine Denise Johnson Williams, a 50-year-old mother of four whose family members kept vigil at the site Saturday.

“It’s Christmastime and she works at a place that’s making candles for gifts,” her brother, Darryl Williams, said. “To give up the gift of life to make a gift. We haven’t heard anything, and I’m not presuming anything. But I’m expecting for the worst.”

He said Johnson Williams called her husband overnight to report the weather was getting bad, the last time anyone heard from her.

Kyanna Parsons-Perez, an employee at the factory, was trapped under 5 feet (about 1.5 meters) of debris for at least two hours until rescuers managed to free her.

In an interview with NBC’s “Today,” she said it was “absolutely the most terrifying” event she had ever experienced. “I did not think I was going to make it at all.”

Just before the tornado struck, the building’s lights flickered. She felt a gust of wind, her ears started popping and then, “Boom. Everything came down on us.” People started screaming, and she heard other workers praying.

Rescue crews used heavy equipment to move rubble at the candle factory, and coroners were called to the scene.