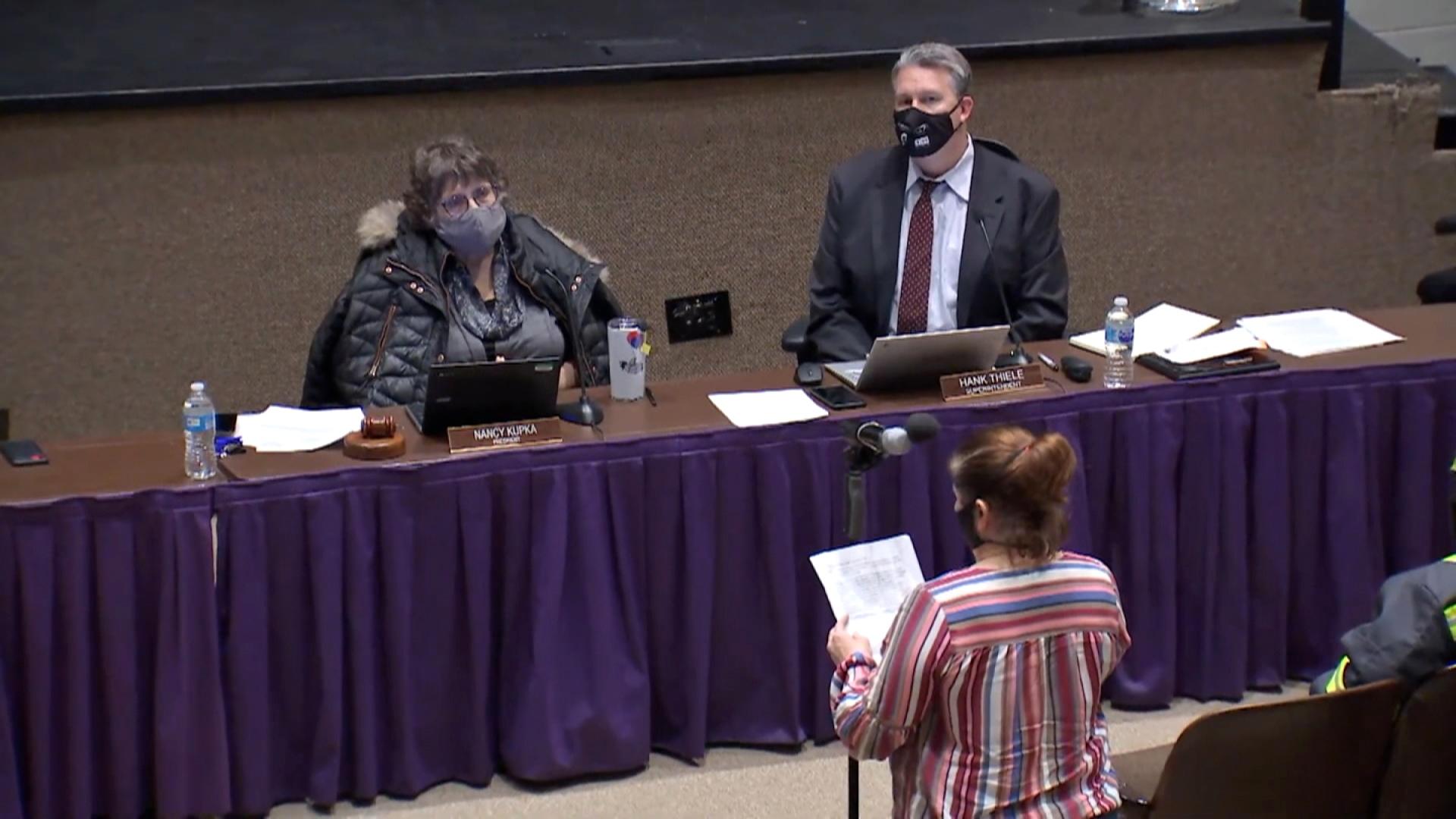 One of the speakers at the Downers Grove school board meeting that discussed the book "Gender Queer" by Maia Kobabe. (Credit: Community High School District 99)

(CNN) -- The increasingly heated debate over the presence of certain books in school libraries was aired at an Illinois school board meeting this week.

After two objections were made to the presence of “Gender Queer” in the library in the Chicago suburb of Downers Grove, residents and students showed up Monday night to voice their opinions on the book by Maia Kobabe.

“Gender Queer” has become a recent target of some politicians and community members. Earlier this month, Texas Gov. Gregg Abbott called on the state’s school boards to remove books he described as “pornography” after at least two state lawmakers asked officials to investigate books in schools – including “Gender Queer.”

Downers Grove student Josiah Poynter, an 18-year-old senior, said the book should be included in the school library because inclusion was important to young people. “Inclusion brings an opportunity to grow in a safe environment and brings comfort to people who feel unloved and cast out,” he told the Community High School District 99’s board meeting.

Poynter said that while the book may raise questions that may not always be comfortable, it’s important to understand the experiences of the LGBTQ community.

He added that students have been given books like “Montana 1948,” which includes graphic rape scenes.

Junior Julia Hanson said that while parts of “Gender Queer” were uncomfortable to read, she was expecting that. “Nothing in this book was new to me,” she said.

“We have already been stripped of our innocence completely and one copy of the book in our library makes no difference to that,” Hanson said.

“After all, most kids have never checked out a book from our library,” she added to laughter from some of the attendees.

Lauren Pierret, a 17-year-old senior, said she was not aware of the book until last week.

“This isn’t being forced upon your kids, but it gives kids who would be interested in this story a choice to read it,” Pierret said. She also referenced other books at the library like “The Handmaid’s Tale” and “Angela’s Ashes” that include sex scenes but are not facing the same criticism in the district.

“Why are these books not being censored?” she asked. “Let’s not present getting rid of ‘Gender Queer’ as censoring our children from sex. It’s homophobia.”

Jim Devlin, a resident who called for the book’s removal, said that the pictures in the book had no educational purpose. “This is pornography, plain and simple. And it does not belong in our schools,” he said.

Resident Terry Newsome said the book was a “child pornographic sketchbook” that was totally unacceptable.

“What you are doing to our children in the name of politics is criminal,” he said, calling for more focus on resources towards children’s education including reading, writing and math.

Ahead of the public comments about “Gender Queer,” district superintendent Hank Thiele said it meets the criteria for inclusion in the library. “This is an optional book and not part of any course or required reading,” he said in a statement.

As for the objections, Thiele told CNN that the book would remain in circulation “while we work through the process to determine if the title should remain in our libraries.”

Last month, “Gender Queer” was singled out by a Texas Republican lawmaker who called on the state’s Attorney General to investigate a list of LGBTQ books in schools to determine if the books give students access to pornography.

“This book touches on subjects that are not appropriate for school libraries and may even be criminal for its representation of minors participating in sexual activities,” Jeff Cason said in a statement in October.

In response to certain LGBTQ books being censored, Kobabe told CNN, “I hope that all of this will really galvanize, librarians, and parents and students who are against censorship.”

Kobabe also expressed appreciation for high school students attending board meetings in support of the book and becoming politically active.

Some school districts in Texas, like the Canutillo Independent School District, have temporarily removed the book from school libraries while the book is under review.