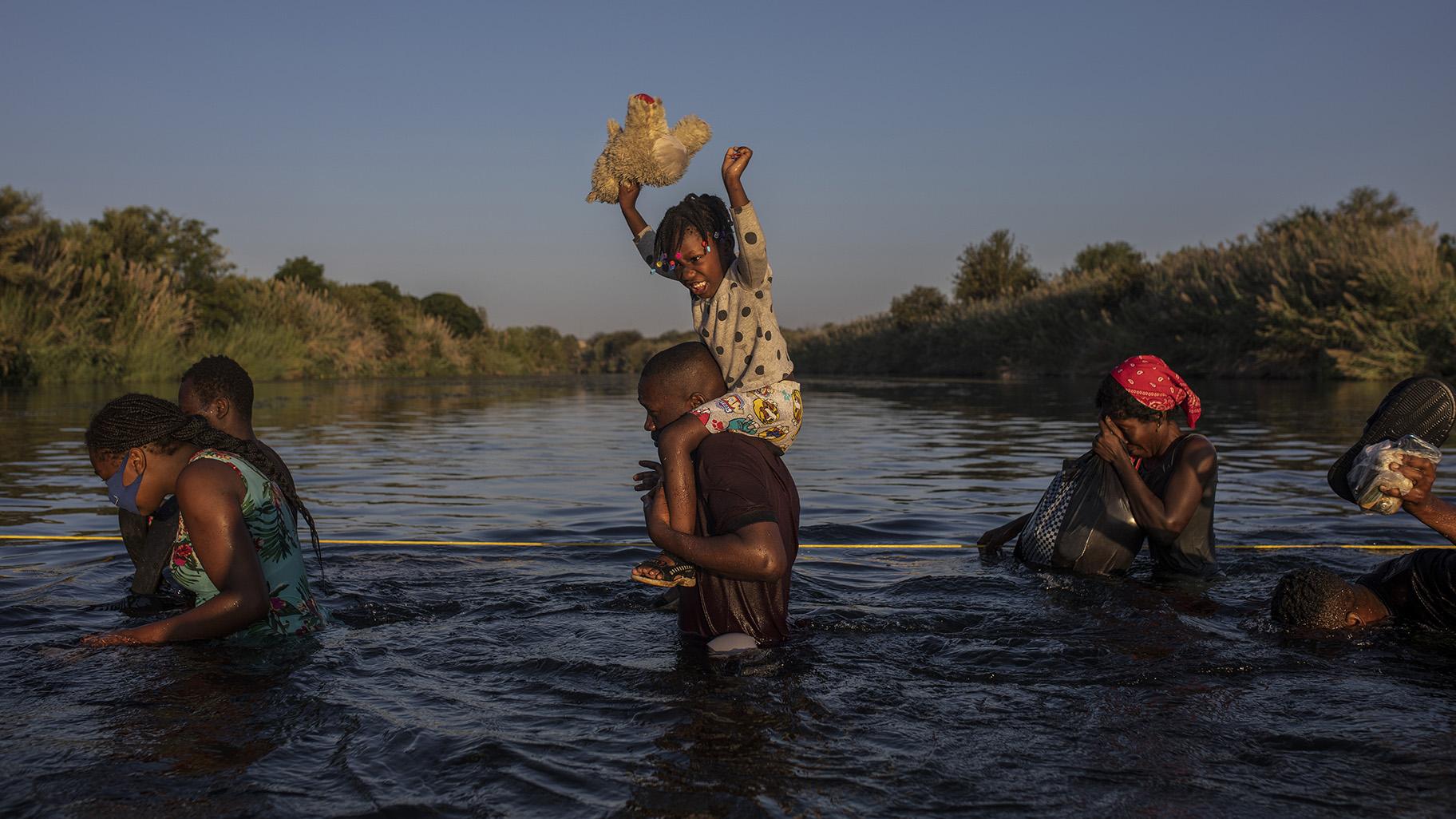 A little girl holds her stuffed animal high above the water as migrants, many from Haiti, wade across the Rio Grande river from Del Rio, Texas, to return to Ciudad Acuña, Mexico, Monday, Sept. 20, 2021, to avoid deportation. (AP Photo / Felix Marquez)

DEL RIO, Texas (AP) — More than 6,000 Haitians and other migrants have been removed from an encampment at a Texas border town, U.S. officials said Monday as they defended a strong response that included immediately expelling migrants to their impoverished Caribbean country and using horse patrols to stop them from entering the town.

Calling it a “challenging and heartbreaking situation,” Department of Homeland Security Secretary Alejandro Mayorkas issued a stark warning: “If you come to the United States illegally, you will be returned. Your journey will not succeed, and you will be endangering your life and your family’s life.”

Mayorkas and Border Patrol Chief Raul Ortiz said they would look into agents on horseback using what appeared to be whips and their horses to push back migrants at the river between Ciudad Acuña, Mexico, and Del Rio, Texas, where thousands of migrants remain camped around a bridge.

Both officials said they saw nothing apparently wrong based on the widely seen photos and video. Mayorkas said agents use long reins, not whips, to control their horses. Ortiz, the former chief of the Del Rio sector, said it can be confusing to distinguish between migrants and smugglers as people moved back and forth near the river. The chief said he would investigate to make sure there was no “unacceptable” actions by the agents.

Mayorkas said 600 Homeland Security employees, including from the Coast Guard, have been brought to Del Rio, a city of about 35,000 people roughly 145 miles (230 kilometers) west of San Antonio. He said he has asked the Defense Department for help in what may be one of the swiftest, large-scale expulsions of migrants and refugees from the United States in decades.

He also said the U.S. would increase the pace and capacity of flights to Haiti and other countries in the hemisphere. The number of migrants at the bridge peaked at 14,872 on Saturday, said Brandon Judd, president of the National Border Patrol Council, a labor union that represents agents.

“We’re achieving our goals; we’re getting there and getting to a point where we can manage the population here,” said Ortiz, who blamed the surge on smugglers who spread misinformation. “We are already seeing a quickly diminished (population) and will continue to see that over the coming days.”

Mexico also said it would expel Haitian migrants, and began busing them from Ciudad Acuña Sunday evening, according to Luis Angel Urraza, president of the local chamber of commerce. He said he saw the first two buses leave from in front of his restaurant with about 90 people aboard.

“There isn’t room for them in the city anymore; we can’t help them anymore,” he said.

Mexico’s immigration agency did not immediately respond to a request for comment. But a federal official told The Associated Press on Sunday that the plan was to take the migrants to Monterrey, in northern Mexico, and Tapachula, in the south, with flights to Haiti from those cities to begin in coming days.

More than 320 migrants arrived in Port-au-Prince on three flights Sunday, and Haiti said six flights were expected Tuesday. The U.S. plans to begin seven expulsion flights daily on Wednesday, four to Port-au-Prince and three to Cap-Haitien, according to a U.S. official who was not authorized to discuss the matter publicly. Flights will continue to depart from San Antonio but authorities may add El Paso, the official said.

The only obvious parallel for such an expulsion without an opportunity to seek asylum was in 1992 when the Coast Guard intercepted Haitian refugees at sea, said Yael Schacher, senior U.S. advocate at Refugees International whose doctoral studies focused on the history of U.S. asylum law.

Similarly large numbers of Mexicans have been sent home during peak years of immigration but over land and not so suddenly.

Central Americans have also crossed the border in comparable numbers without being subject to mass expulsion, although Mexico has agreed to accept them from the U.S. under pandemic-related authority in effect since March 2020. Mexico does not accept expelled Haitians or people of other nationalities outside of Mexico, Guatemala, Honduras and El Salvador.

In Mexico, local authorities of border municipalities have asked for help from state and federal authorities. Claudio Bres, the mayor in Piedras Negras, about 62 miles (100 kilometers) southeast of Ciudad Acuña, told local media that the official agreement is to turn back all the buses with migrants to prevent them from reaching the border. He said that last weekend around 70 buses passed through his town.

Some of the migrants at the Del Rio camp said the recent devastating earthquake in Haiti  and the assassination of President Jovenel Moïse make them afraid to return to a country that seems more unstable than when they left.

“In Haiti, there is no security,” said Fabricio Jean, a 38-year-old Haitian who arrived in Texas with his wife and two daughters. “The country is in a political crisis.”

But Mayorkas defended his recent decision to grant Haitians temporary legal status due to political and civil strife in their homeland if they were in the United States on July 29, but not to those being sent back now.

“We made an assessment based on the country conditions … that Haiti could in fact receive individuals safely,” he said.

Some migrants said they were planning to leave Haiti again as soon as possible. Valeria Ternission, 29, said she and her husband want to travel with their 4-year-old son back to Chile, where she worked as a bakery’s cashier.

“I am truly worried, especially for the child,” she said. “I can’t do anything here.” 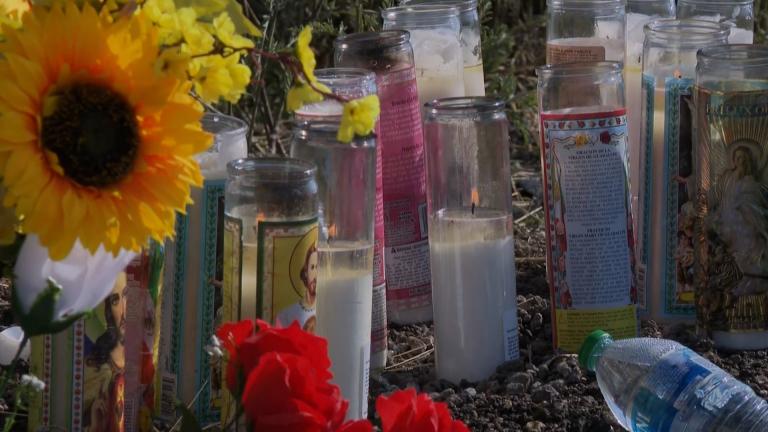 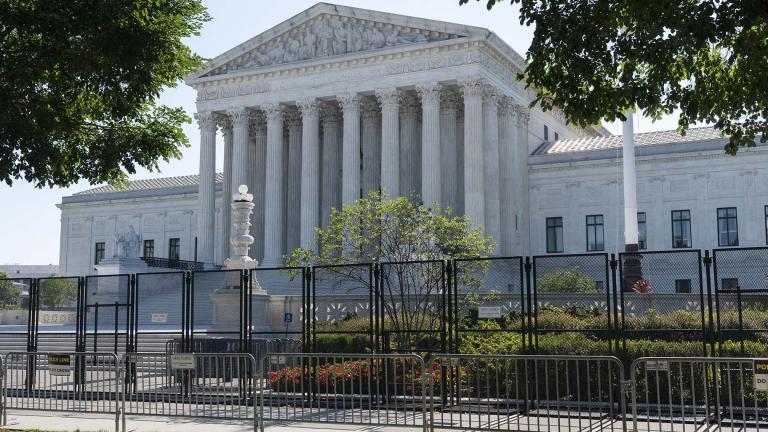