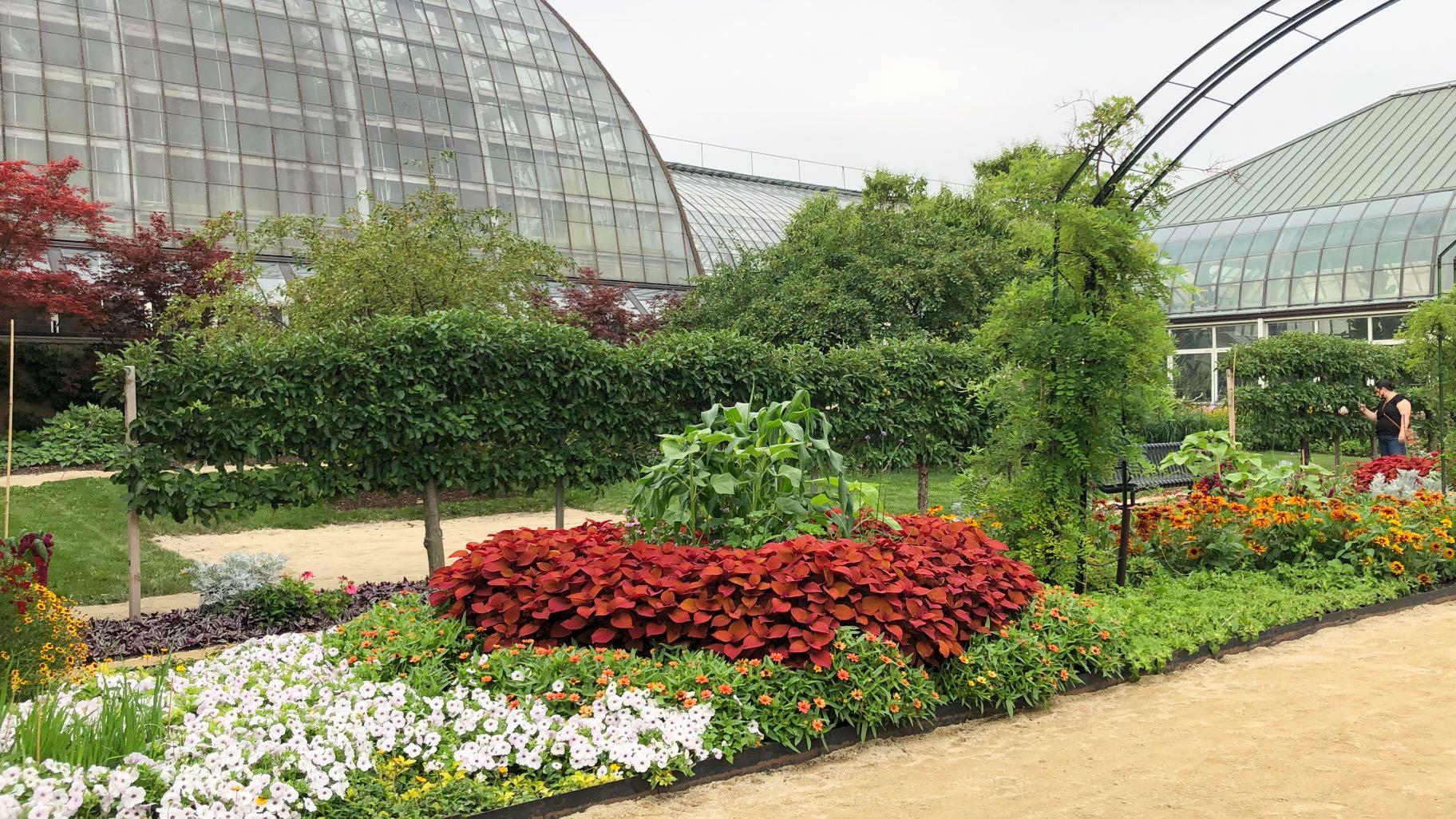 As an artist specializing in still lifes and landscapes, Charles Ethan Porter, a late 19th-century painter, translated scenes from nature onto canvas.

Now the Garfield Park Conservatory has reversed the process, using spades instead of brushes, and plants in place of paints, to transform its Artist’s Garden into a living interpretation of Porter’s work.

The resulting exhibit, “Still Life in Real Life,” runs through Oct. 17 and represents something of a leap forward for the conservatory. Where last year’s exhibit in the garden, “Flowers of Monet,” drew on some of the most universally recognized imagery in the canon of Western art (see, “Water Lilies”), with Porter, the conservatory is introducing visitors to a figure only recently rescued from anonymity.

“I really want people to know him,” said Peter Vrotsos, deputy director of horticulture for the Chicago Park District. “He’s too talented not to be known.” 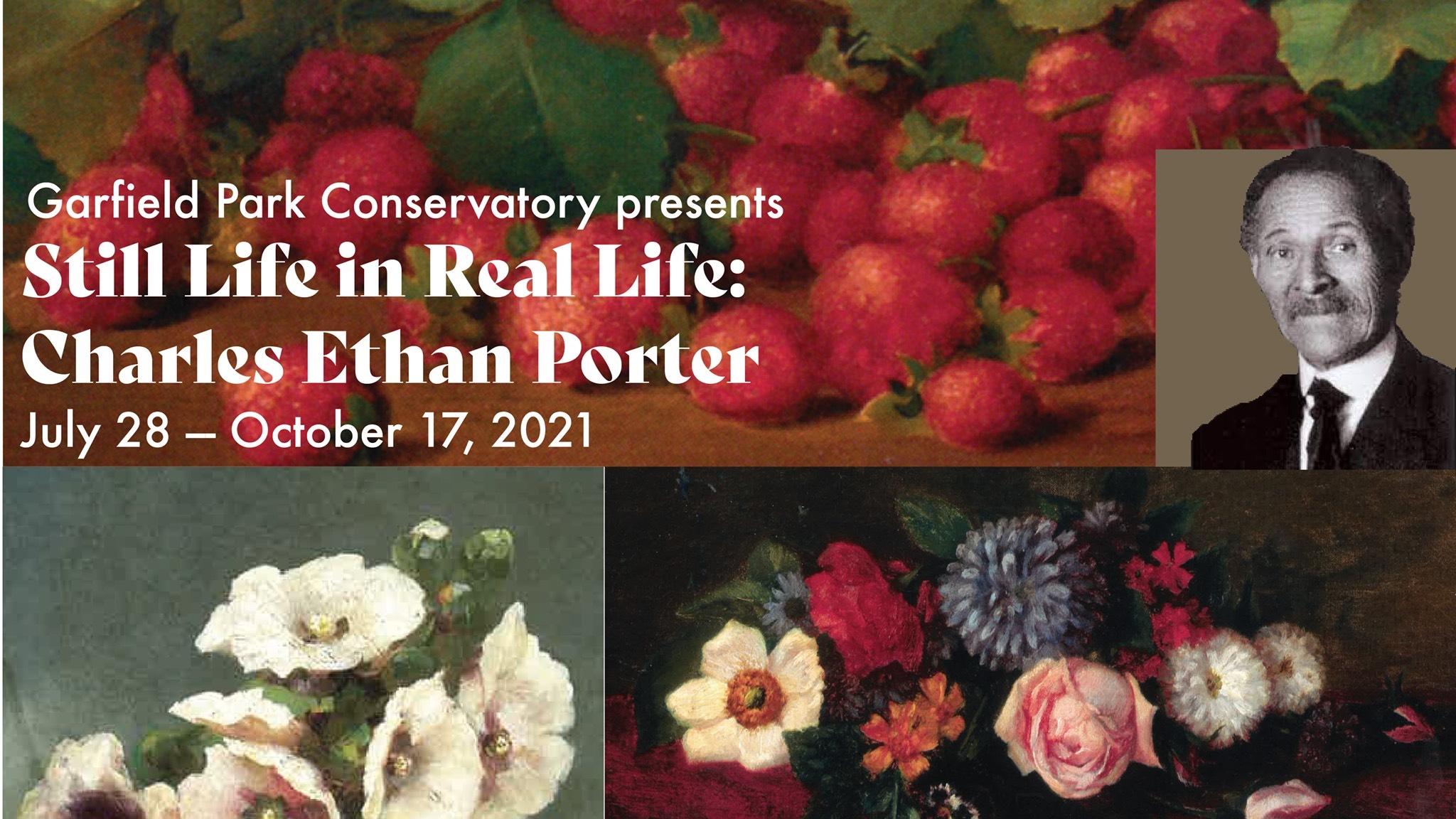 Porter was born in Connecticut in the mid-1800s to free African American parents and became the first African American to attend the National Academy of Design in New York. A love of nature led him to paint still lifes of flowers and fruits — apples in particular — and later, landscapes. In his time, he was the only Black painter specializing in these genres, according to scholars.

Among his hallmarks: an exquisite eye for color, less stilted arrangements and unusual subject matter, including insects and cracked-open watermelons.

“His work is so beautiful,” said Vrotsos. “It somehow feels more timely, more relevant, than some of the old Dutch masters.”

Though Porter met with early praise and success, his work purchased by no less an admirer than Mark Twain, he sold fewer and fewer paintings as the years passed and tastes changed. Like many an artist before him, Porter died in relative obscurity in 1923.

Interest in his work began to revive in the 1980s, and by 2008, Porter was the subject of his first museum exhibit. A smattering of his paintings are now held in the collections of institutions including the Metropolitan Museum of Art and the Smithsonian American Art Museum, but the vast majority remain unknown or in the hands of people who may be unaware of their significance.

Perhaps the conservatory exhibit will prompt someone to take a closer look at a painting gathering dust in an attic or basement and possibly discover a long-lost Porter. Minimally, Vrotsos said he hopes it gets people to read up on Porter.

“I just want people to be familiar with his work,” Vrotsos said. 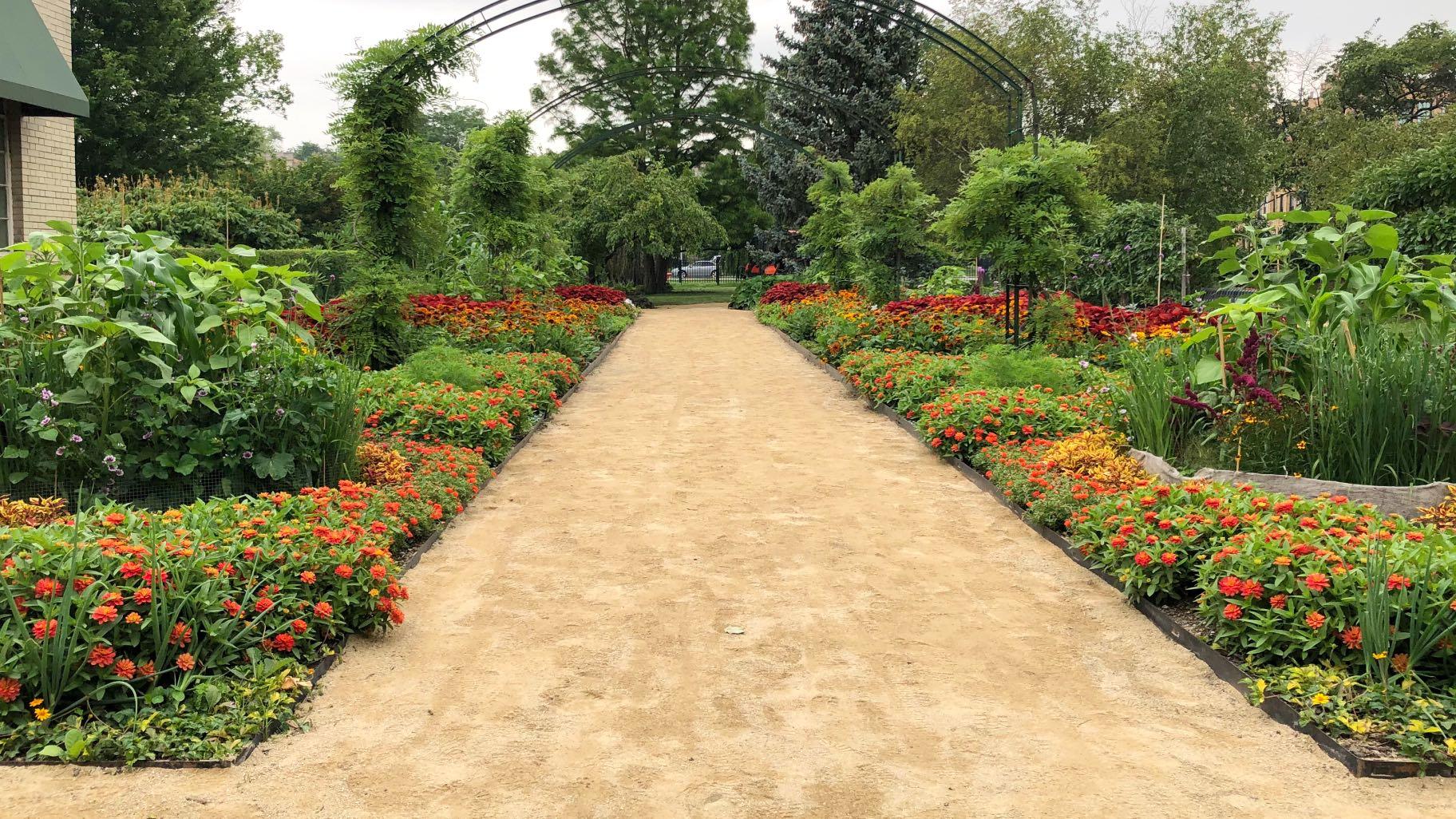 Much like a movie or television show “inspired by true events,” the conservatory’s exhibit doesn’t attempt to slavishly recreate scenes from Porter’s paintings but rather offers an interpretation of his aesthetic.

In some cases that meant grouping together plants found in specific Porter paintings, as seen in a repeated combination of oats, corn and sunflowers.

Among the exhibit’s more unique elements is a semicircular section of garden that aims to mimic Porter’s creative process, a trick accomplished through a series of flower beds that progress from barely planted on one end to evermore full and lush on the other, the final patch equating to a completed painting. 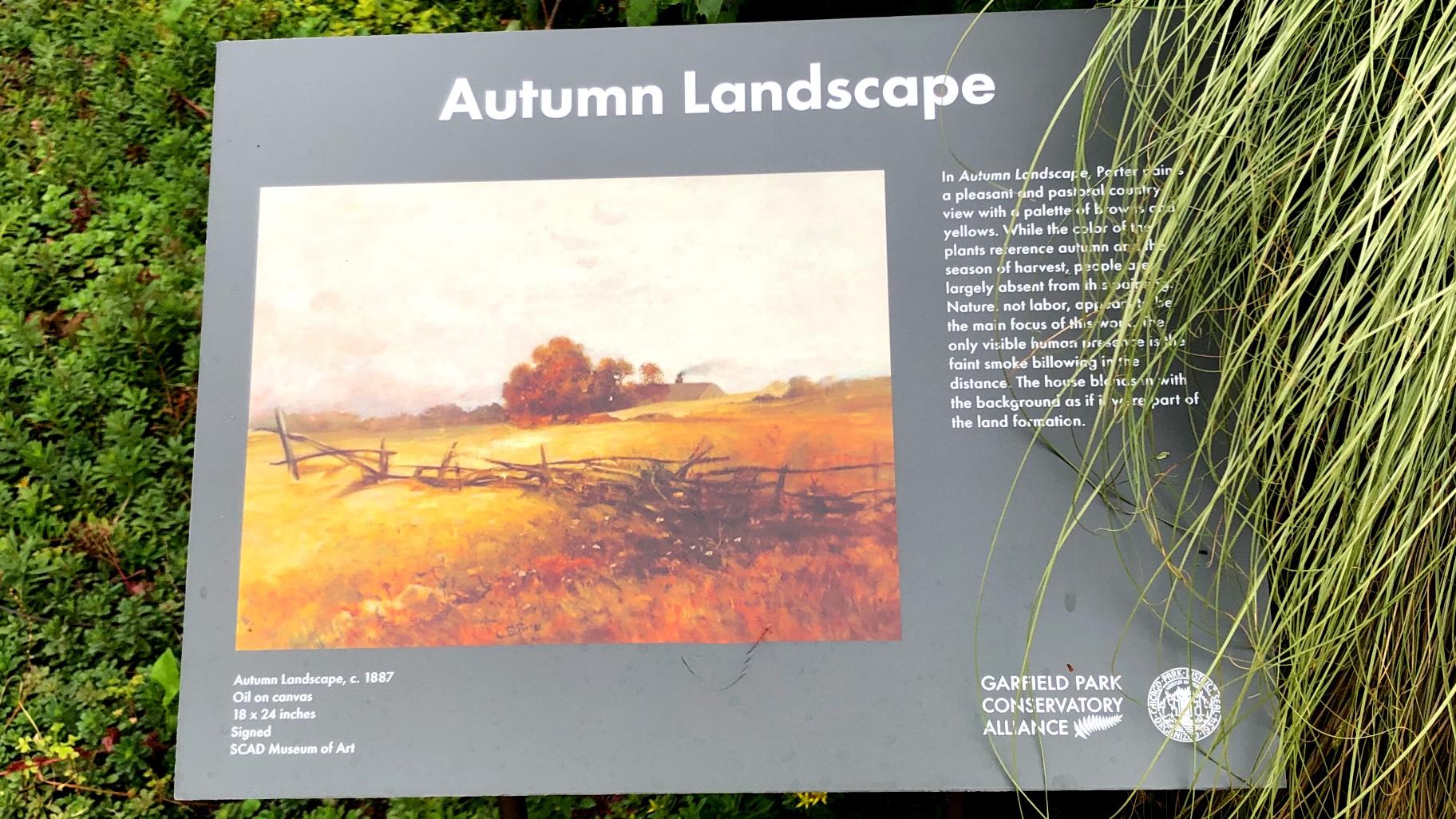 Images of Porter’s paintings, including “Autumn Landscape,” are positioned throughout the conservatory’s exhibit. 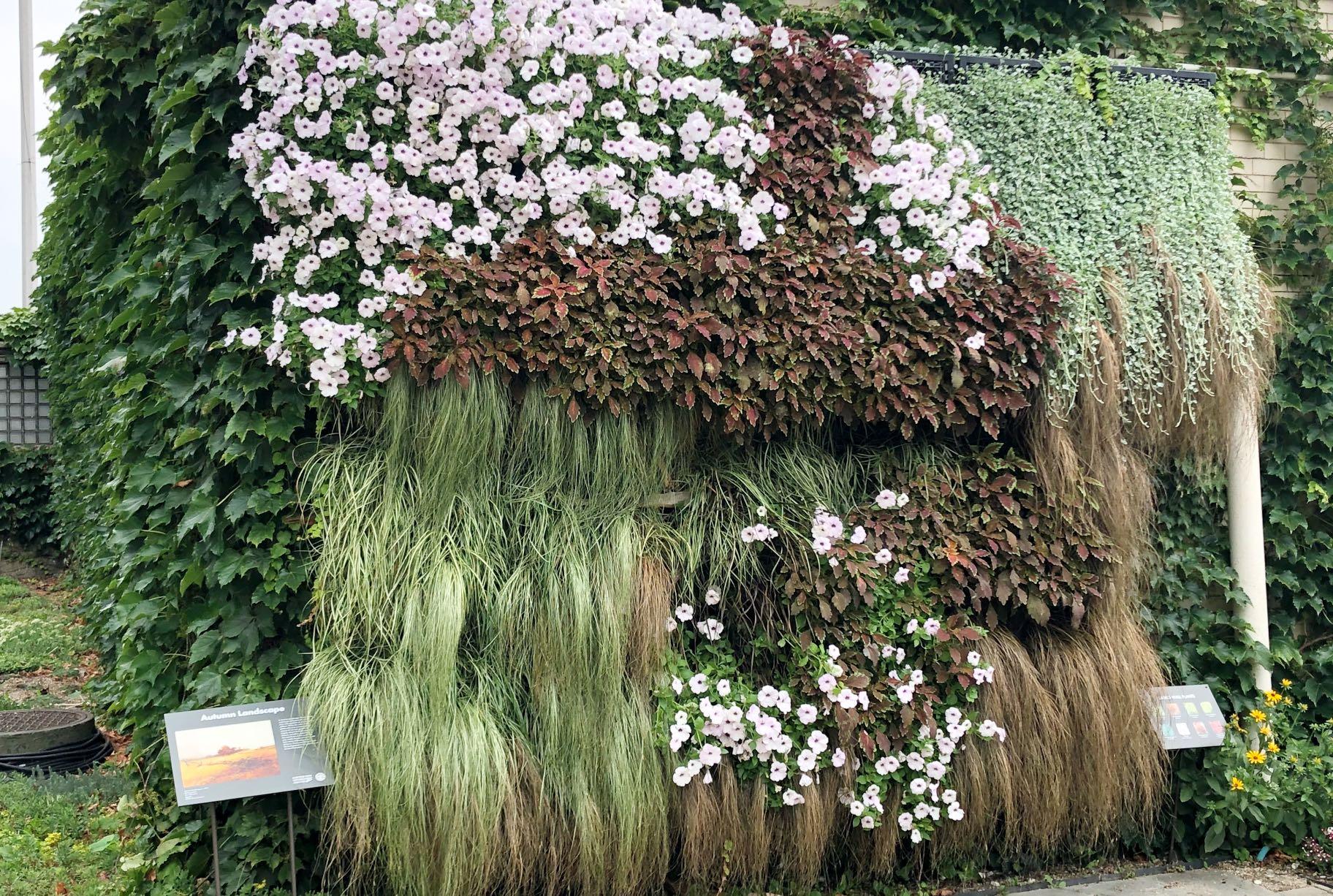 The exhibit’s striking living wall pays homage to “Autumn Landscape,” with cascading grasses and flowers inspired by the different textures and colors that inhabit the painting’s landscape. 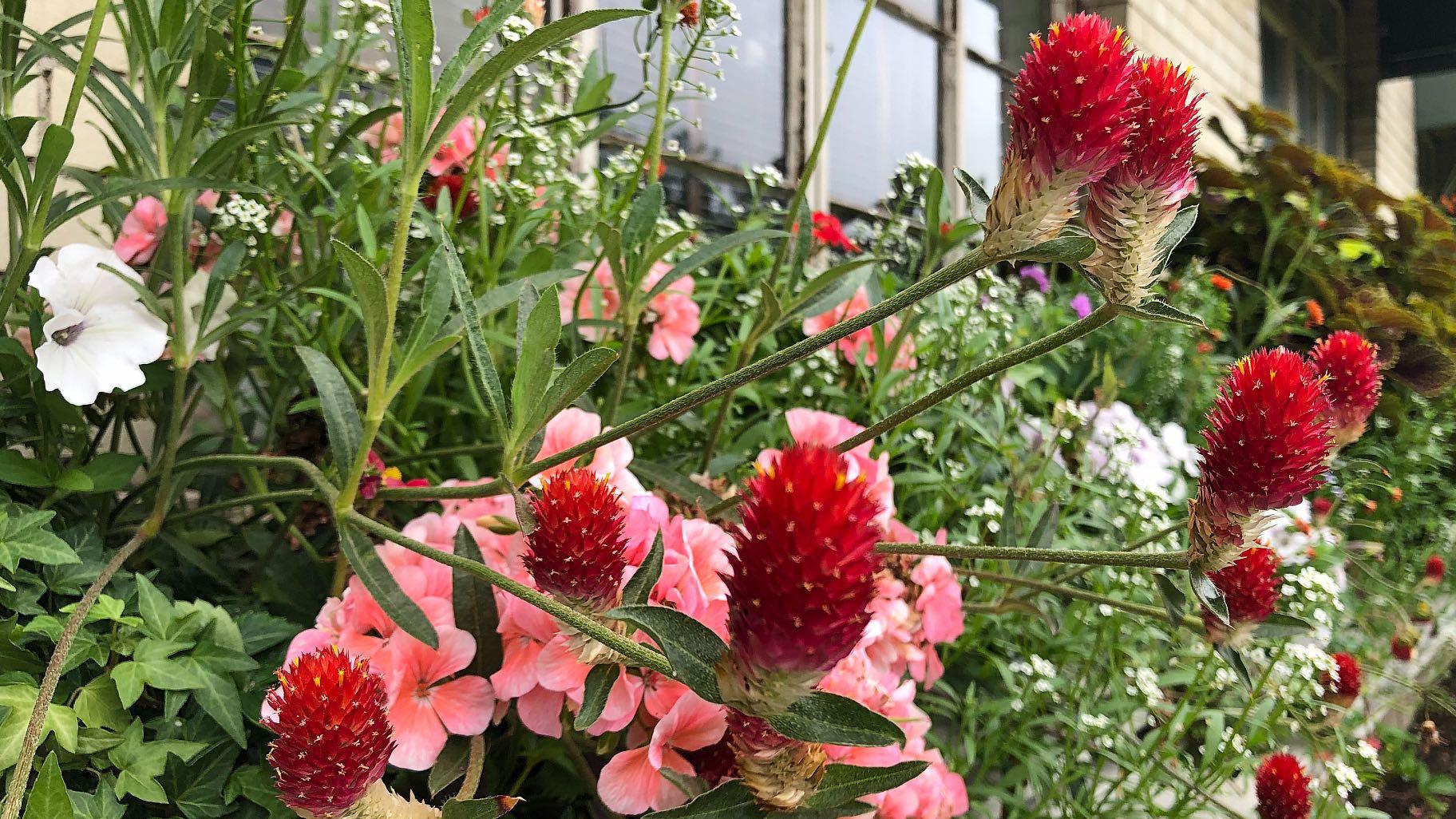 Porter liked to paint strawberries. The exhibit incorporate not only the actual fruit, but the flower gomphrena (aka, globe amaranth), chosen because it looks like strawberries. (Patty Wetli / WTTW News)

Porter liked to paint strawberries. The exhibit incorporates not only the actual fruit, but the flower gomphrena (aka, globe amaranth), chosen because it looks like strawberries, Vrotsos said. 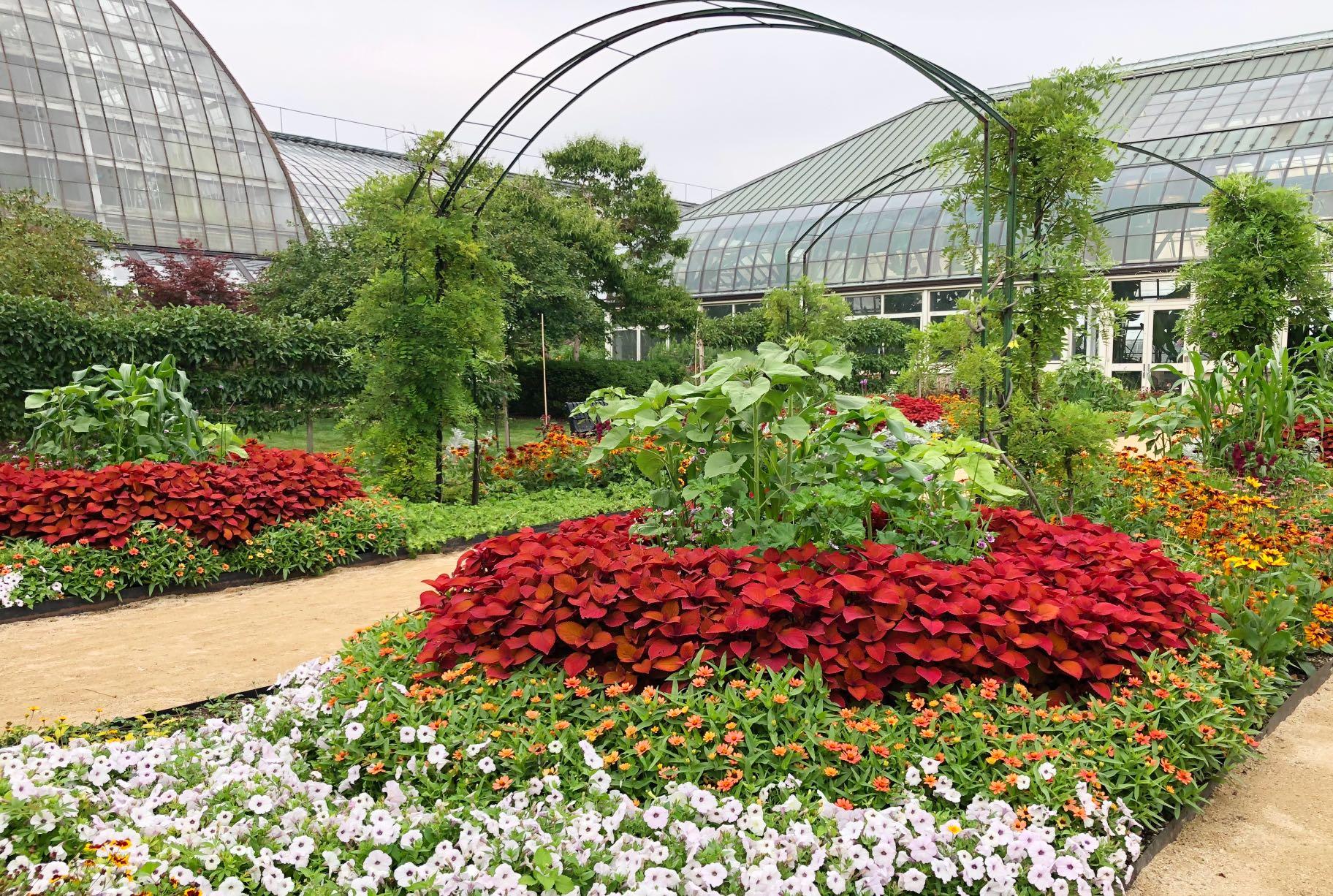 Among the exhibit’s focal points are groupings of plants “framed” liked paintings by circles of red coleus. Vrotses admitted it was a risk to put shade-loving coleus in full sun, but the plants were holding up well. Although the groupings were intended to be largely identical, rabbits plagued the conservatory’s plantings and threw a wrench into some of the best-laid plans. 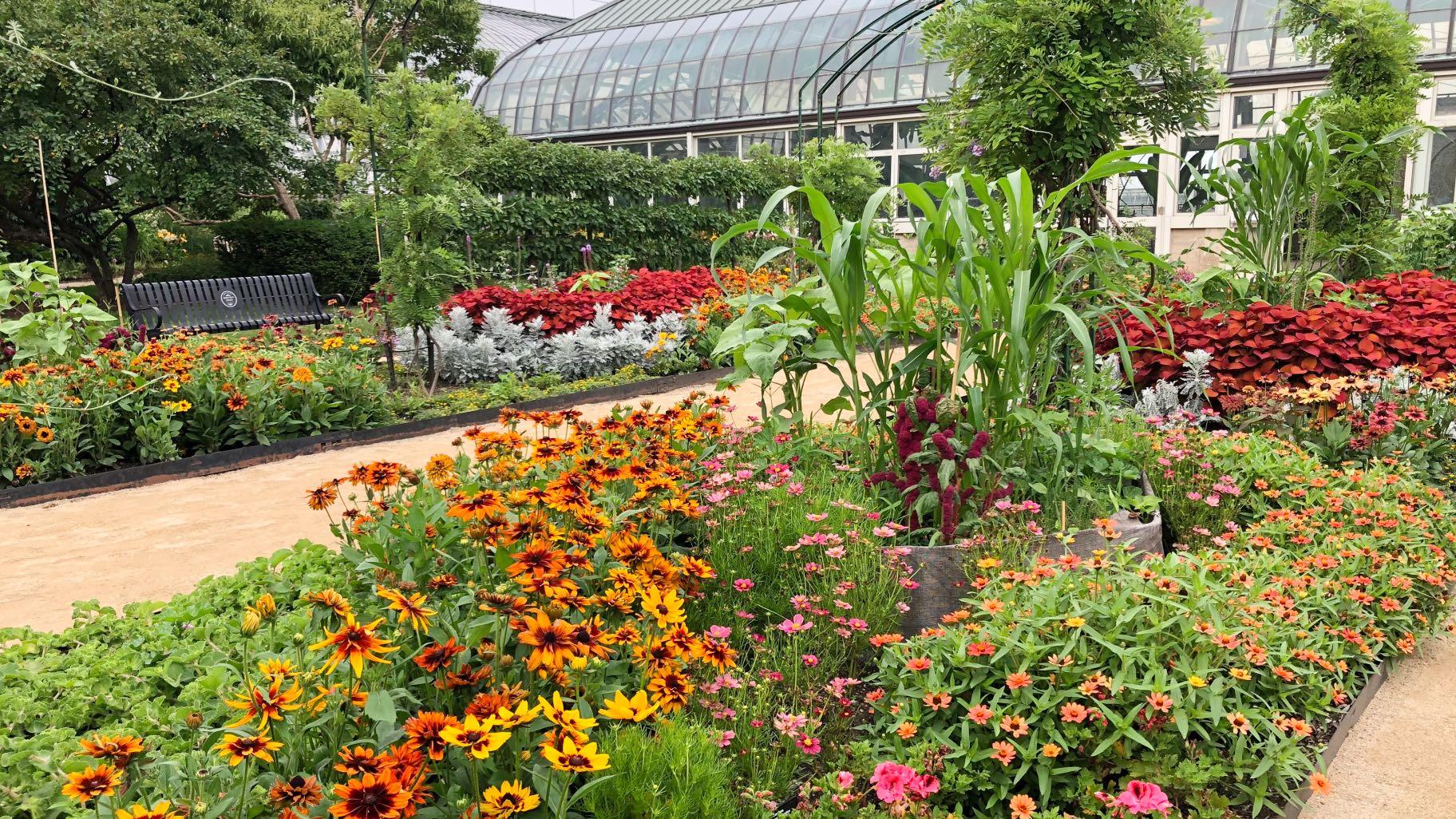 Corn isn't widely seen in ornamental gardens, but Porter incorporated it into one of his better known paintings. (Patty Wetli / WTTW News)

Corn isn’t widely used in ornamental gardens, but Vrotses said the conservatory selected it for the exhibit because Porter incorporated it into one of his better known paintings, “Still Life With Corn.” 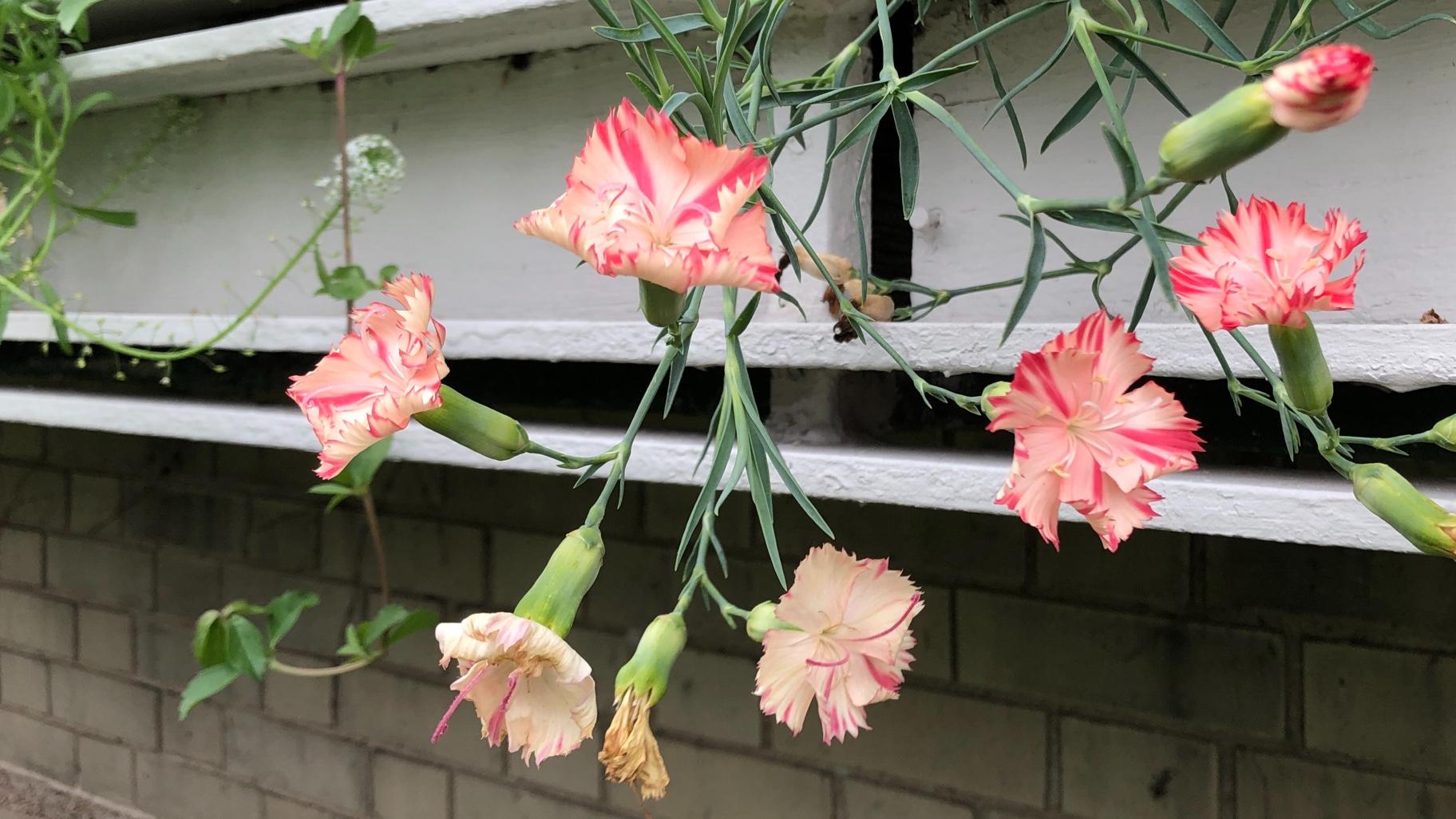 Carnations have fallen out of favor, but Porter loved to paint them. In a happy accident, the conservatory's plantings formed an intended swag by reaching for the sun. (Patty Wetli / WTTW News)

Carnations have fallen out of favor with florists of late, but they were among the flowers Porter often incorporated into his paintings. In a happy gardening “accident,” the conservatory’s carnations formed an unintended swag by bending to reach for the sun. 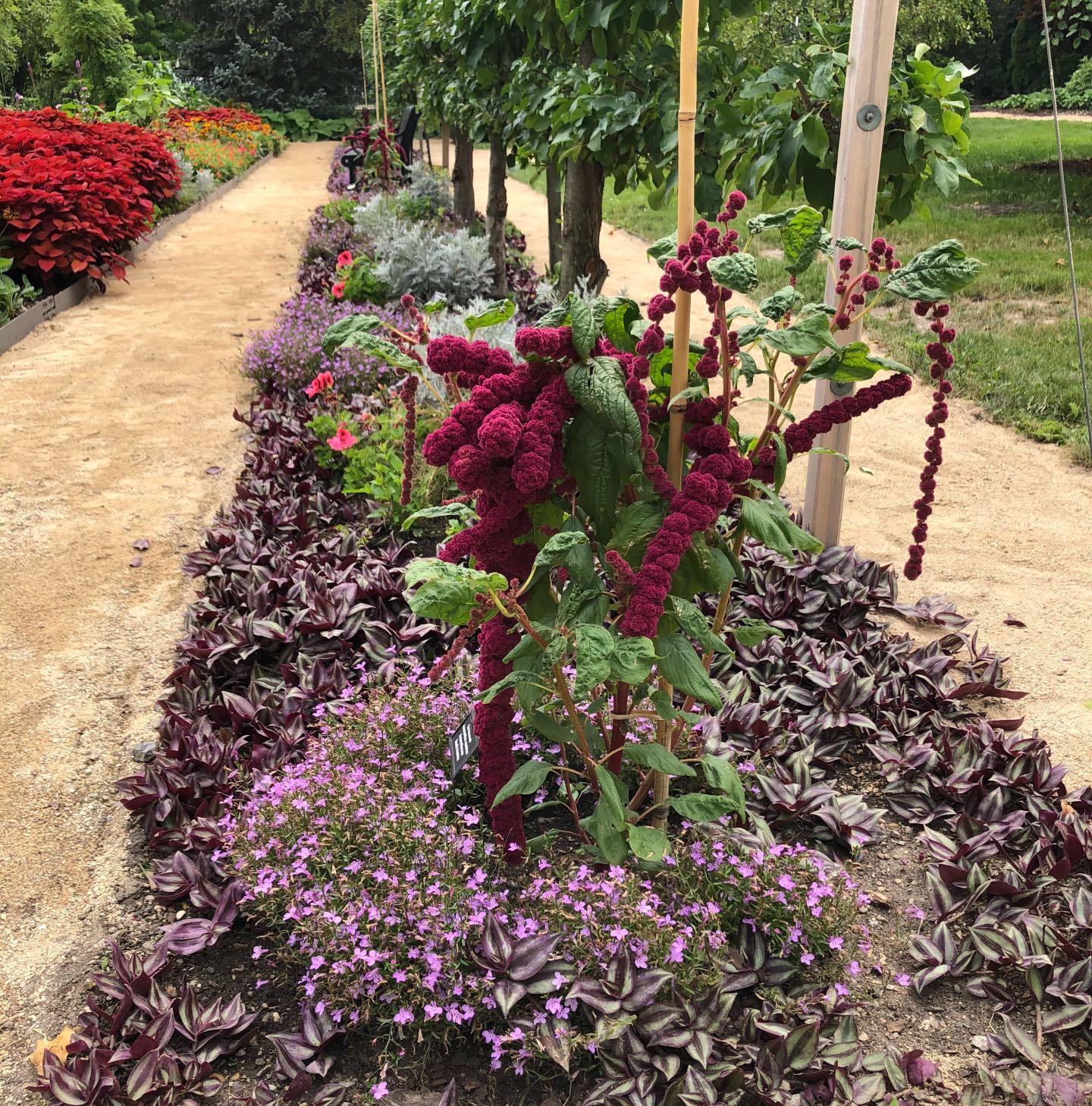 There are some 8,000 to 10,000 individual plants packed into the Artist’s Garden exhibit, including eye-catching amaranth. Many of the plants were grown from seed, starting back in February.