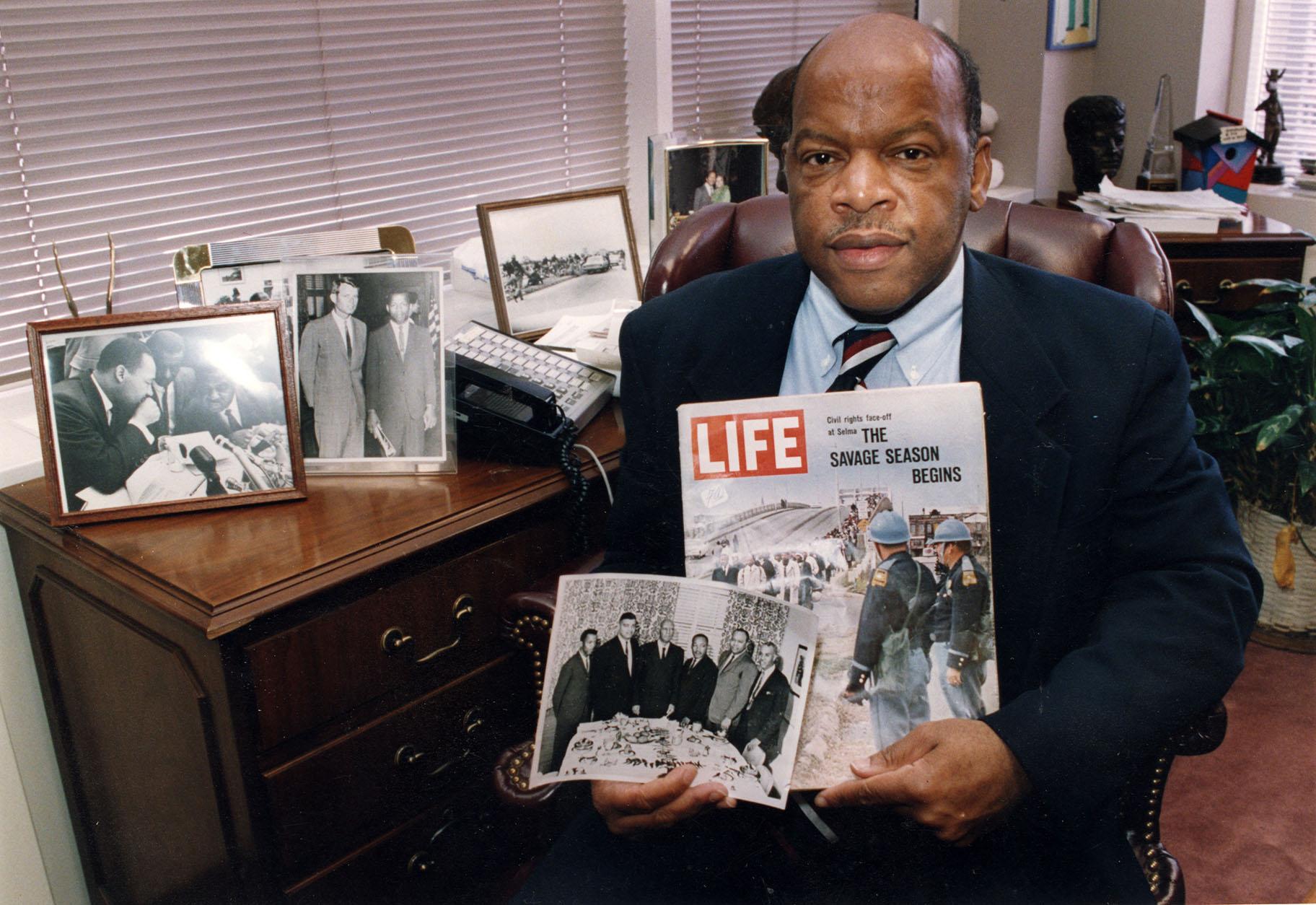 Congressman John Lewis is seen in his Atlanta office with two of his favorite items from his collection of memorabilia from his younger days as a civil rights activist in the 1960s. (Atlanta Journal-Constitution via AP)

Biden said he often reflects on the last conversation he and his wife, Jill, had with Lewis, days before the Georgia congressman died.

“Instead of answering our concerns for him, he asked us to remain focused on the unfinished work — his life’s work — of healing and uniting this nation,” Biden said in a statement.

The president said the unfinished work includes “building an economy that respects the dignity of working people with good jobs and good wages” and “ensuring equal justice under law is real in practice and not just a promise etched in stone.”

“Perhaps most of all, it means continuing the cause that John was willing to give his life for: protecting the sacred right to vote,” Biden said. “Not since the Civil Rights Movement of the 1950s and 1960s have we seen such unrelenting attacks on voting rights and the integrity of our elections.”

Biden said the attacks include the Jan. 6 insurrection and lies about the 2020 election.

Lewis was a high-profile civil rights activist before he won a Georgia congressional seat as a Democrat in 1986. Harris said in her own statement Saturday that he was “an American hero.”

“Congressman Lewis fought tirelessly for our country’s highest ideals: freedom and justice for all, and for the right of every American to make their voice heard at the ballot box,” Harris said.

Lewis was 80 when he died months after announcing he had advanced pancreatic cancer. He was the youngest and last survivor of the Big Six civil rights activists, a group led by the Rev. Martin Luther King Jr. that had the greatest impact on the movement.

Lewis was best known for leading some 600 protesters in the Bloody Sunday march across the Edmund Pettus Bridge in Selma, Alabama, in 1965. Alabama state troopers beat Lewis and other activists who were marching for voting rights that day.

As a college student at American Baptist College and then Fisk University, Lewis helped desegregate public spaces in Nashville and pushed for racial justice across the South.

Nashville celebrated with events Friday and Saturday, renaming a large portion of Fifth Ave. to Rep. John Lewis Way. Among establishments lining the street is the Woolworth downtown building, where Lewis and other Black civil rights leaders defiantly sat at the segregated lunch counter that wouldn’t serve them in 1960. Lewis was punched in the ribs and saw someone put out a cigarette on the back of another protester.

Hundreds marched down the street before arriving at Ryman Auditorium, for a celebration ceremony that included the Rev. James Lawson, author Jon Meacham and musicians Rodney Crowell and Darius Rucker.

In San Diego, senior U.S. lawmakers and members of Lewis’ family gathered Saturday for the christening of a Navy ship named after Lewis.

“This ship will be a beacon to the world reminding all who see it of the persistence and courage of John Lewis,” Speaker Nancy Pelosi, D-Ca., said at the christening of the USNS John Lewis.

Lewis’ nephew, Marcus Tyner, said the family was grateful for the honor, but said “what would please my uncle most” is if Congress passed the voting rights bill named after him.

The ship will be the first in the Navy’s fleet of oilers designed to transfer fuel and water to vessels carrying out missions in the Western Pacific, Indian Ocean and beyond.

In her statement Saturday, Harris recalled crossing Alabama’s Edmund Pettus Bridge with Lewis during a commemoration in 2020.

“The right to vote remains under attack in states across our nation,” Harris said. “And the best way to honor Congressman Lewis’ legacy is to carry on the fight — by passing the John Lewis Voting Rights Advancement Act as well as the For the People Act, and by helping eligible voters no matter where they live get registered and vote, and have their vote counted.”

Democrats on Capitol Hill are pushing for a sweeping federal voting and elections bill that Senate Republicans have united to block, saying they think it intrudes on states’ ability to conduct elections. Most Republicans have also dismissed a separate bill, the John Lewis Voting Rights Advancement Act, which would restore sections of the Voting Rights Act that were weakened by the Supreme Court.