WASHINGTON (AP) — Facing rising fears of summer violence, President Joe Biden is embarking on a political high-wire act, trying to balance his strong backing for law enforcement with the police reform movement championed by many of his supporters.

His focus Monday was on crime.

Biden met at the White House with Democratic urban leaders — including Eric Adams, the heavy favorite to be the next mayor of New York City — about increased shootings, as they warily watch a surge across the nation. Though limited to what can be done at the federal level, Biden promised to support efforts on the ground to combat crime.

“We know when we utilize trusted community members and encourage more community policing, we can intervene before the violence erupts,” the president said.

The meeting was the second in just three weeks, underscoring the political concern crime has become for Democrats as they look to protect their thin margins in Congress. Big city mayors and lawmakers have sounded the alarm on the rise in crime, believed partly fueled by destabilizing forces of the pandemic, and polls suggest it is an increasing matter of concern for many Americans.

White House aides believe that Biden, with his long legislative record on crime as a former senator, is not easy to paint as soft on the issue, and the president has been clear that he is opposed to the “defund the police” movement, which has been effectively used against some Democrats to paint them as anti-law enforcement.

The president promotes the money for policing in his COVID-19 relief bill and, reflecting on his nearly four decades in the Senate, declares that “Most of my career has been on this issue.” 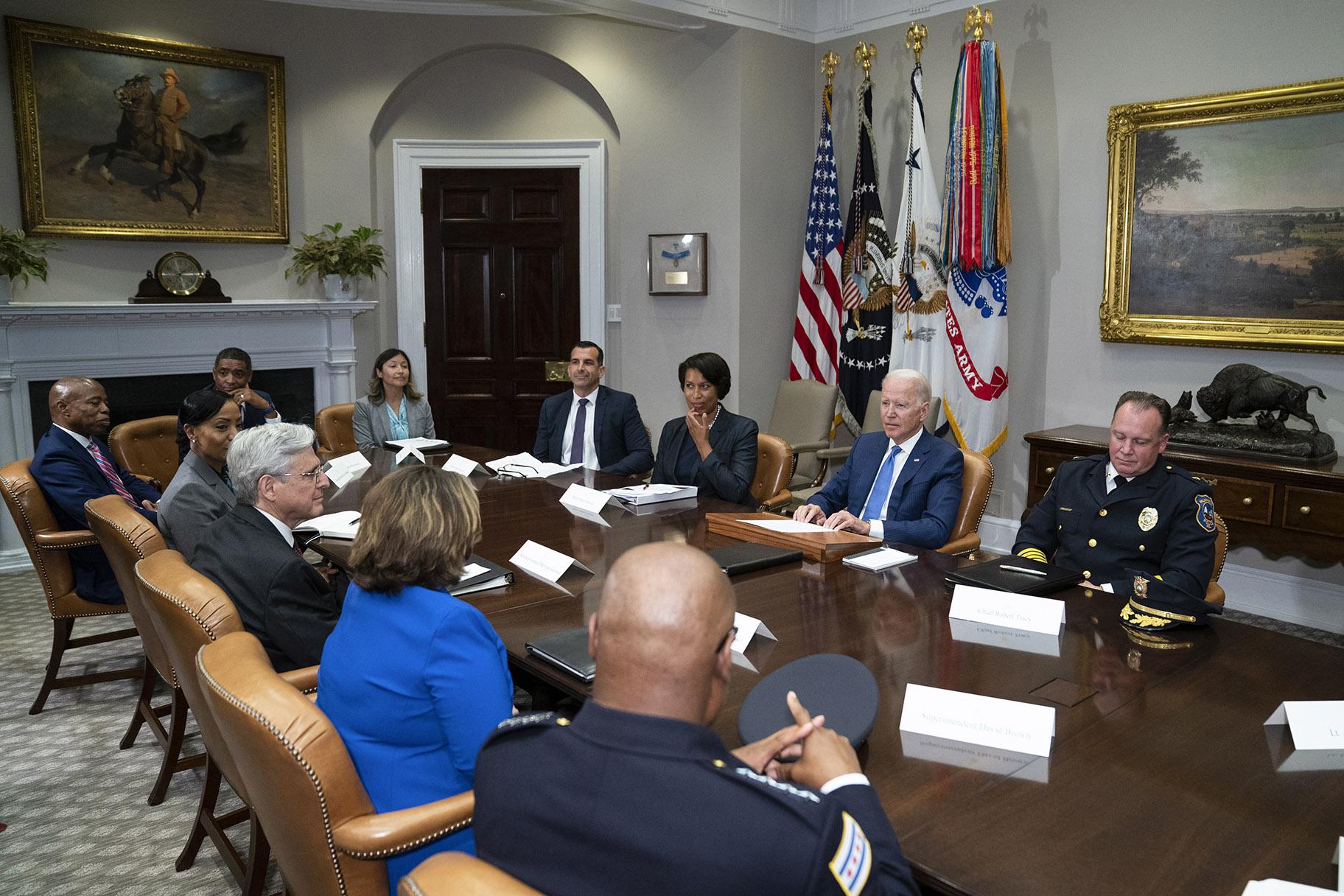 President Joe Biden speaks during a meeting on reducing gun violence, in the Roosevelt Room of the White House, Monday, July 12, 2021, in Washington. Chicago police Superintendent David Brown is visible at center, with his back to the camera. (AP Photo / Evan Vucci)

At the same time, Biden has also tried to boost progressives’ efforts to reform policing and has backed a bill that, after initial promise, has stalled in the Senate.

Biden lent his support to the protests that swept the nation last year after the death of George Floyd, a Black man, under the knee of a white police officer. That incident sparked a national reckoning on race, including sometimes-violent protests that were seized upon by then-President Donald Trump to raise anger among his conservative supporters.

Crime has become a major Republican talking point and has been a frequent topic of conversation on conservative media.

Biden received overwhelming support from Black voters and picked the first Black woman, Kamala Harris, to be vice president. The president and White House aides are frequently in touch with civil rights leaders to consult on police reform and voting access.

While combating crime and reforming the police don’t inherently have to be at odds, the two efforts have been increasingly billed that way. And the presence in the White House meeting of Adams, who doesn’t face general election voters until November, was symbolic of the administration’s effort to find a middle ground.

A rise in shootings as New York City began to emerge from the pandemic helped propel a late charge for Adams, a black former police captain who rejects defund-the-police talk. Adams also says he would bring back a contentious plainclothes anti-crime unit that focused on getting guns off the streets, a unit that was disbanded amid charges that it used excessive force and strained ties with communities.

Adams beat more liberal candidates, but his lifetime of speaking out against police misconduct and his blunt, working-class style make it difficult to pigeonhole him. He spoke frequently on the campaign trail of being beaten by police officers as a teenager and joining the force to reform it from within. And Adams, who appears to only face token Republican opposition this fall, was a founder of a group called 100 Blacks in Law Enforcement Who Care that fought against racial profiling and advocated for the hiring of more officers of color.

Biden recently announced new efforts to stem the tide of violence, but the federal government is limited in what it can do to help localities reduce the spike. His plan focuses on providing funding to cities that need more police, offering community support and cracking down on gun violence and illegal firearms. 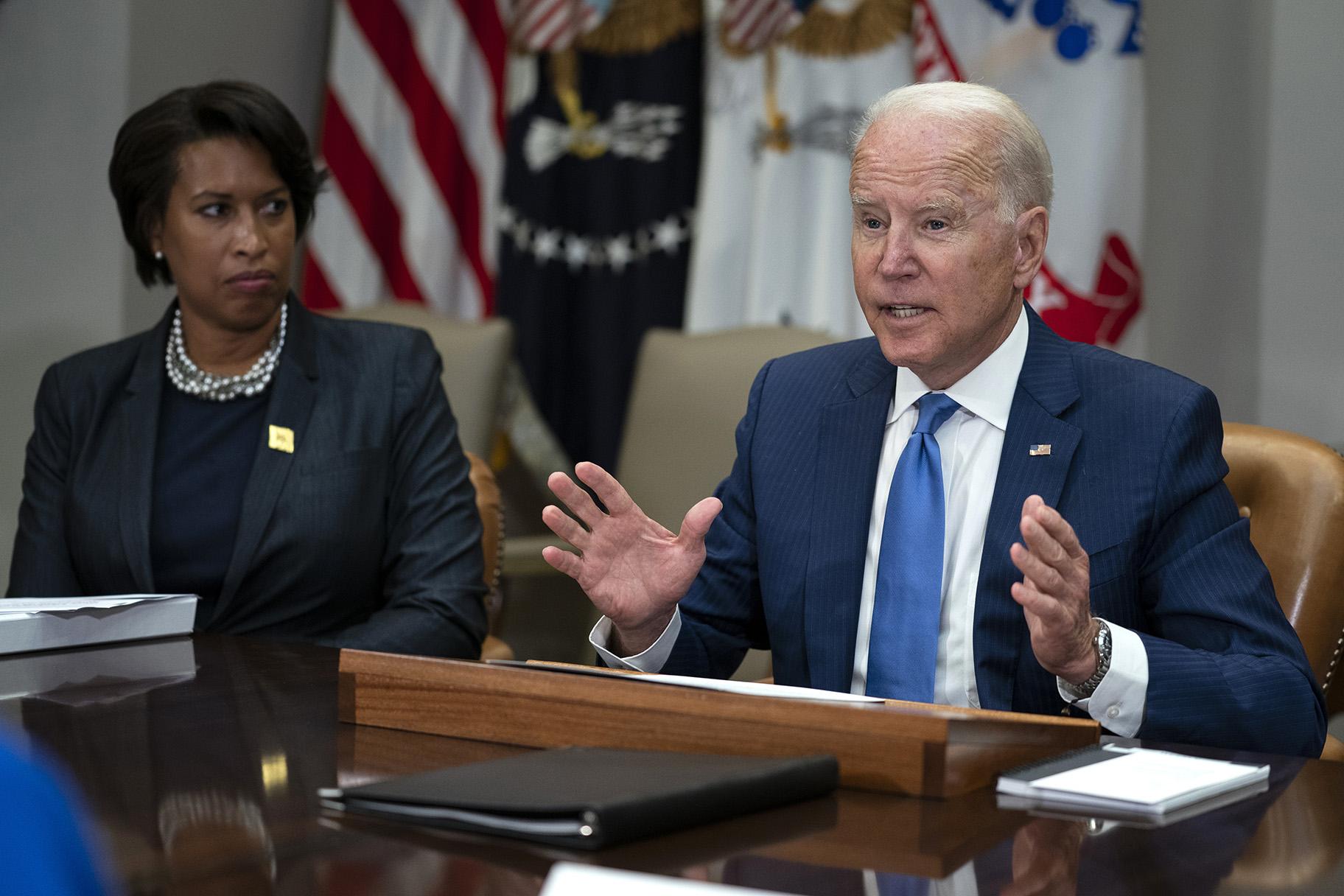 But much of Biden’s effort is voluntary — centered on encouraging cities to invest some of their COVID-19 relief funds into policing and pushing alternative crime reduction steps such as increased community support and summer jobs for teenagers, who are often both targets and perpetrators of violence. He again on Monday called for Congress to pass gun legislation, but there are no signs of movement on Capitol Hill.

Federal statistics show significant increases in murder nationwide, though spikes in crime are common in the summer months. The federal government has been trying to step up its efforts, launching strike forces in Chicago, New York, Los Angeles, San Francisco and Washington, D.C. to help address illegal gun trafficking.

And while crime is rising, violent crime overall remains lower than it was a decade ago or even five years ago. And most violent crimes plummeted during the first six months of the pandemic, as people stayed indoors and away from others.

In fact, the spike in crime defies easy explanation. Experts point to a number of potential causes: the pandemic that has killed more than 600,000 people in the U.S., worries about the economy, large gatherings after months of stay-at-home orders, intense stress and even the weather.

Police leaders nationwide have said they are struggling with the increase in shootings and homicides. They’re grappling with retirements and fewer staff and a difficulty in recruiting officers to help push back.

“We’re solely focused on law enforcement at the moment. My hope is that throughout this time we can do some things that really benefit people in general, but we really need to think globally.”