Video: President Biden spends the day in McHenry County. Amanda Vinicky has this report from Crystal Lake on “Chicago Tonight.”

CRYSTAL LAKE, Ill. (AP) — President Joe Biden pitched his proposed investments in families and education at an Illinois community college on Wednesday, telling residents of the swing district that what’s good for families is also good for the economy.

The president set out for the Chicago suburbs to bolster support for both his bipartisan infrastructure deal and a broader package that he expects will be passed with only Democratic votes. His message is one designed to resonate with suburban parents, college graduates and the working poor — a coalition that was key to Biden’s election win last year.

“There’s a lot of work ahead of us to finish the job, but we’re going to get it done,” Biden said in a 30-minute speech that he self-deprecatingly suggested was boring but important. “We’re going to reimagine what our economy and our future could be.”

Before the speech, Biden toured a metals lab at the McHenry County College. His message was that any investments in manufacturing, roads and bridges should be paired with funding for child care, health care and education.

The president listed details of the bipartisan infrastructure deal, but the agreement constitutes only part of the $4 trillion in spending Biden has proposed in a broader plan to reinvigorate the economy and boost the middle class. Republicans have warned that the tax increases on corporations and the wealthy needed to fund Biden’s ambitions will hurt the economy. 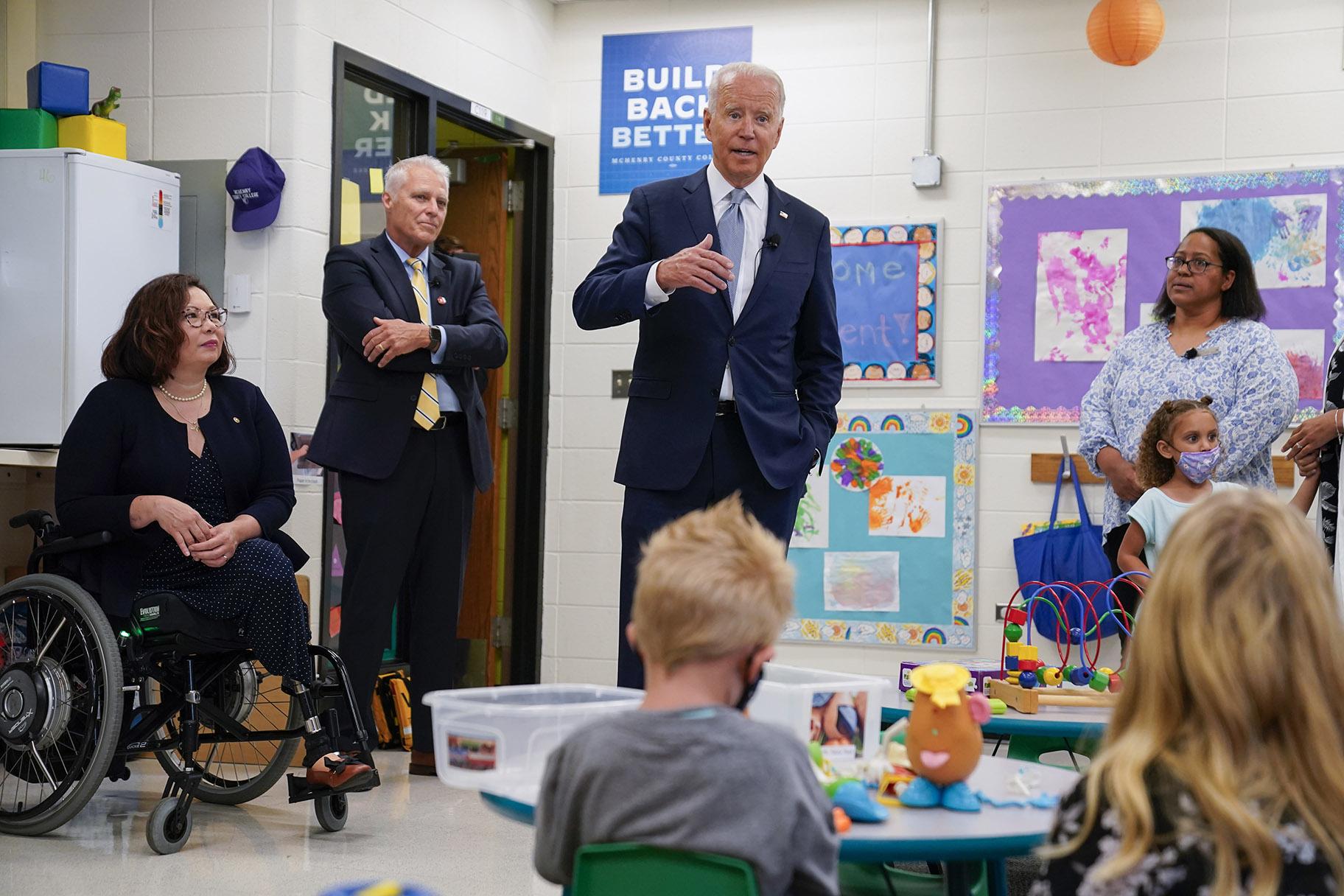 Among Biden’s proposals are two years of free community college, universal prekindergarten and paid family and medical leave. He also seeks to extend the expansion in the child tax credit and the health care premium subsidies from the COVID-19 aid bill.

Democrats plan to include much of this in a bill they hope to pass through a legislative maneuver that would require just a simple majority vote, skirting the 60-vote hurdle in an evenly divided Senate. Biden has said he would prefer that the two bills move through Congress together, and Democrats are hoping to make progress this month on both.

The Biden administration promoted its agenda on multiple fronts Wednesday.

First lady Jill Biden visited an elementary school in Washington to discuss how the trillions of dollars the president wants Congress to spend on families would pay for more affordable child care, preschool for all 3- and 4-year-olds, larger salaries for teachers and modern school buildings with safe drinking water, along with more teachers of color and more nurses and counselors to help students with their emotional and other needs.

“You and your students will continue to be one of our top priorities, not just in one legislative bill, but in everything we do,” she said during a speech to a virtual meeting of the American Federation of Teachers union. 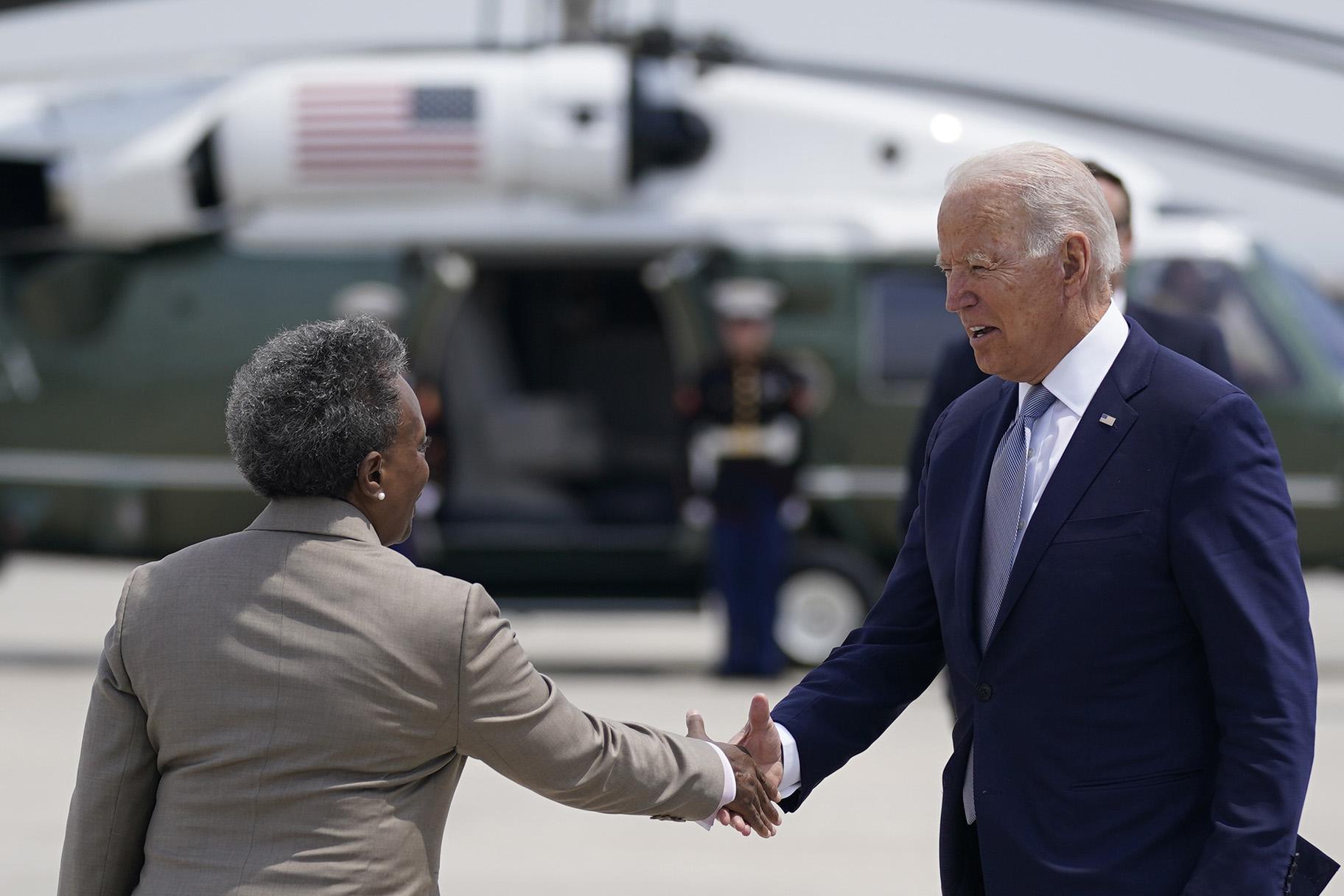 President Biden was greeted by Chicago Mayor Lori Lightfoot when he landed in Illinois and was met at the community college by Democratic Gov. J.B. Pritzker; Illinois’ two Democratic senators, Dick Durbin and Tammy Duckworth; and Democratic Rep. Lauren Underwood, who represents the district.

Biden won Illinois’ 14th Congressional District by about 2 percentage points in 2020, and Underwood won reelection by less than that. Hers is one of the top-targeted seats in the nation and is emblematic of the kind of district Democrats will need to hold onto in the 2022 midterms if they hope to maintain control of the House.