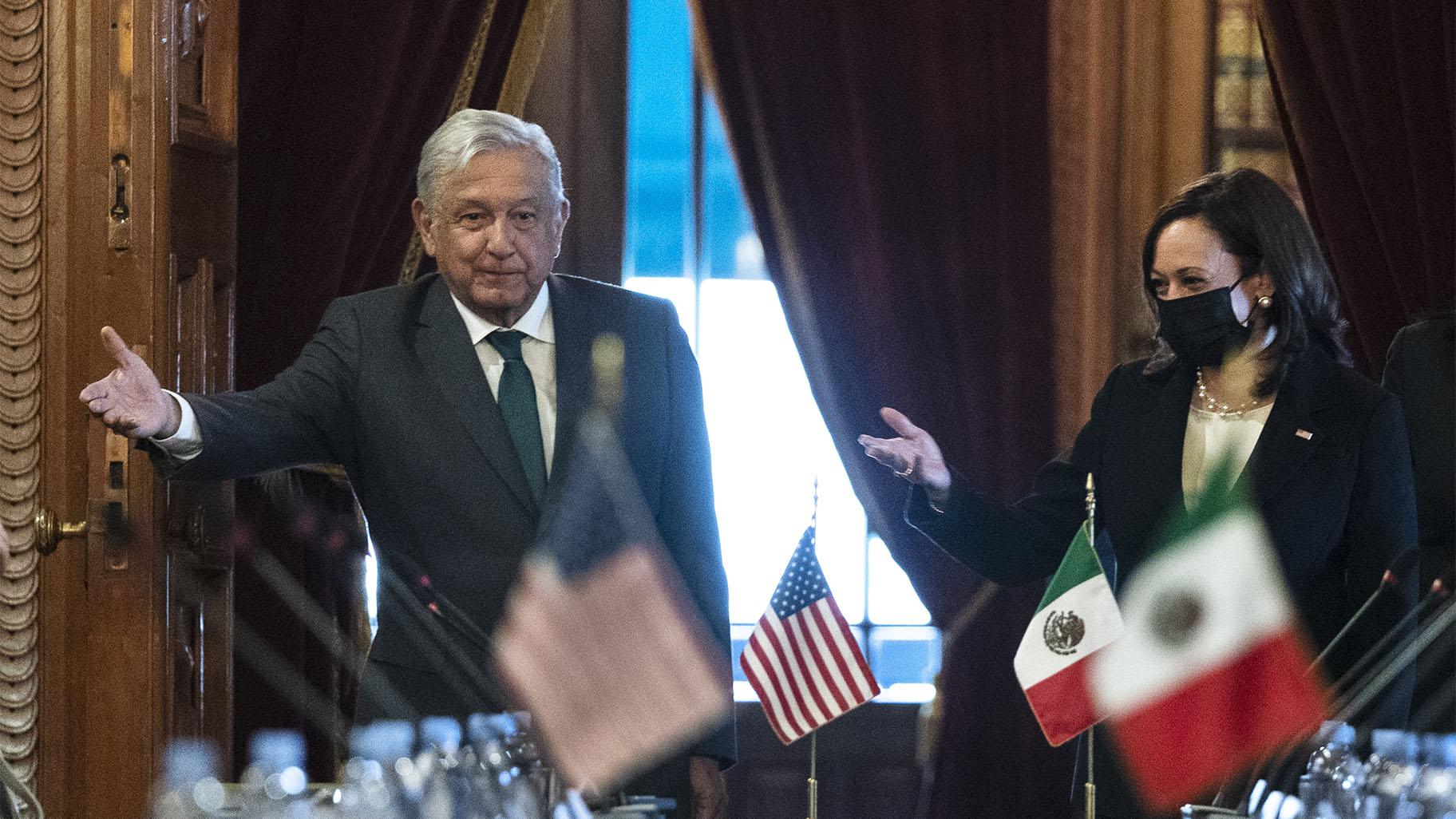 MEXICO CITY (AP) — Vice President Kamala Harris told Mexican President Andrés Manuel López Obrador on Tuesday that the United States and Mexico are “embarking on a new era” during her first in-person meeting with the leader, as she seeks to foster greater cooperation with Mexico on immigration to the U.S.

Speaking at the start of their bilateral meeting at the Mexican national palace, Harris emphasized the longstanding “interdependence and interconnection” of the two nations.

Joined by her top foreign policy aides for the region, the two leaders met for over an hour in an elegant conference room at the palace, seated across from each other under a grand crystal chandelier.

Just prior to the meeting, Harris and López Obrador watched as the Mexican foreign affairs secretary and the chargé d’affaires of the U.S. Embassy in Mexico signed a memorandum of understanding aimed at greater cooperation between the two countries on development programs in Guatemala, El Salvador and Honduras.

Harris was slated to meet with female entrepreneurs and labor leaders in Mexico before heading back to Washington Tuesday night.

The visit to Mexico capped Harris’ first foreign trip as vice president, a brief foray focused on dealing with the root causes of migration that brought her first to Guatemala on Monday. While in Guatemala, she met President Alejandro Giammattei. To coincide with their meeting, the Biden administration announced a number of new commitments to combat trafficking, smuggling, and corruption, as well as investments in economic development in the country.

Her visit to Mexico didn’t yield any clear and concrete agreements; instead she emphasized the importance of the relationship.

López Obrador remains a key but complicated ally in the Biden administration’s efforts to curb the spike in migration at the U.S. border.

While López Obrador committed in a previous virtual meeting with Harris that the U.S. can “count on us” to help address irregular migration, the Mexican president has in the past blamed President Joe Biden for the increase in migration at the border. And he was chummy with Biden’s predecessor, Donald Trump, despite that president’s hardline border policies.

In May, he also accused the U.S. of violating Mexico’s sovereignty for giving money to non-governmental organizations that were critical of his government. Harris was looking to strengthen diplomatic relations with Mexico while addressing the core reasons why so many people from the Northern Triangle countries of Guatemala, El Salvador and Honduras as well as Mexico are compelled to try to flee to the U.S.

The memorandum of understanding, according to special envoy Ricardo Zúñiga, who traveled with Harris on the trip, marks a new level of cooperation between two countries that have “some of the same issues” concerning migration.

“It’s very important to show that the United States and Mexico are collaborating and trying to improve conditions on the ground among our neighbors, because of the importance that other countries in Central America have for both of us,” he told reporters traveling with Harris.

Some Democrats criticized the vice president Monday when she delivered a direct message to those considering leaving their homes and making the often dangerous trek to the U.S. border: “Do not come.”

Her comments echoed those made by past U.S. officials as they’ve tried to dissuade migrants from seeking to cross the border, as the U.S. faces unprecedented numbers of attempted border crossings. Democratic Rep. Alexandria Ocasio-Cortez of New York called her comments “disappointing” and noted that it is legal to seek asylum.

Harris declined to respond directly to the criticism when reporters asked, saying only: “I’m really clear: we have to deal with the root causes and that is my hope. Period.”

The administration said the meeting produced an agreement to have an economic dialogue in September on trade, telecommunications and supply chains.

As well, the U.S. will devote $130 million over the next three years for labor reforms in Mexico and provide loans to bolster southern Mexico’s economy. The two countries will also partner on human trafficking and economic programs addressing why people leave El Salvador, Guatemala and Honduras for the U.S.

Her meeting with Lopez Obrador followed Mexico’s midterm elections, which appeared to deliver a mixed result for the president’s party in initial results.

Harris was not expected to address the results during her meeting with the president, but fallout from the bloody campaign loomed over the meeting. Nearly three dozen candidates or prospective candidates were killed as drug cartels sought to protect their interests.

The Mexican government’s inability to provide security in parts of the country is of interest to the U.S. in an immigration context, both for the people who are displaced by violence and the impact it has on a severely weakened economy trying to reemerge from the pandemic.

The increase in migration at the border has become one of the major challenges confronting Biden in the early months of his first term, with Republicans seizing on an issue they see as politically advantageous. Polls suggest Americans are less favorable toward Biden’s approach to immigration than they are toward his policies on the economy and the COVID-19 pandemic.

They’ve tried to make Harris the face of that immigration policy, charging she and Biden are ignoring the issue because both have yet to visit the southern border. Harris told reporters she was focused on “tangible” results “as opposed to grand gestures.”

Illegal border crossings have increased steadily since April 2020, after Trump introduced pandemic-related powers to deny migrants the opportunity to seek asylum, but further accelerated under Biden. The new president quickly scrapped many of Trump’s hardline border policies — most notably the program that made asylum-seekers wait in Mexico, often in dangerous conditions, for court dates in U.S. immigration court.

U.S. border authorities encountered nearly 19,000 unaccompanied children in March, the highest on record. Overall, more than 170,000 encounters were reported on the border in April, the highest level in more than 20 years.

The numbers aren’t directly comparable because getting stopped under pandemic-related authorities carries no legal consequences, resulting in many repeat crossings.