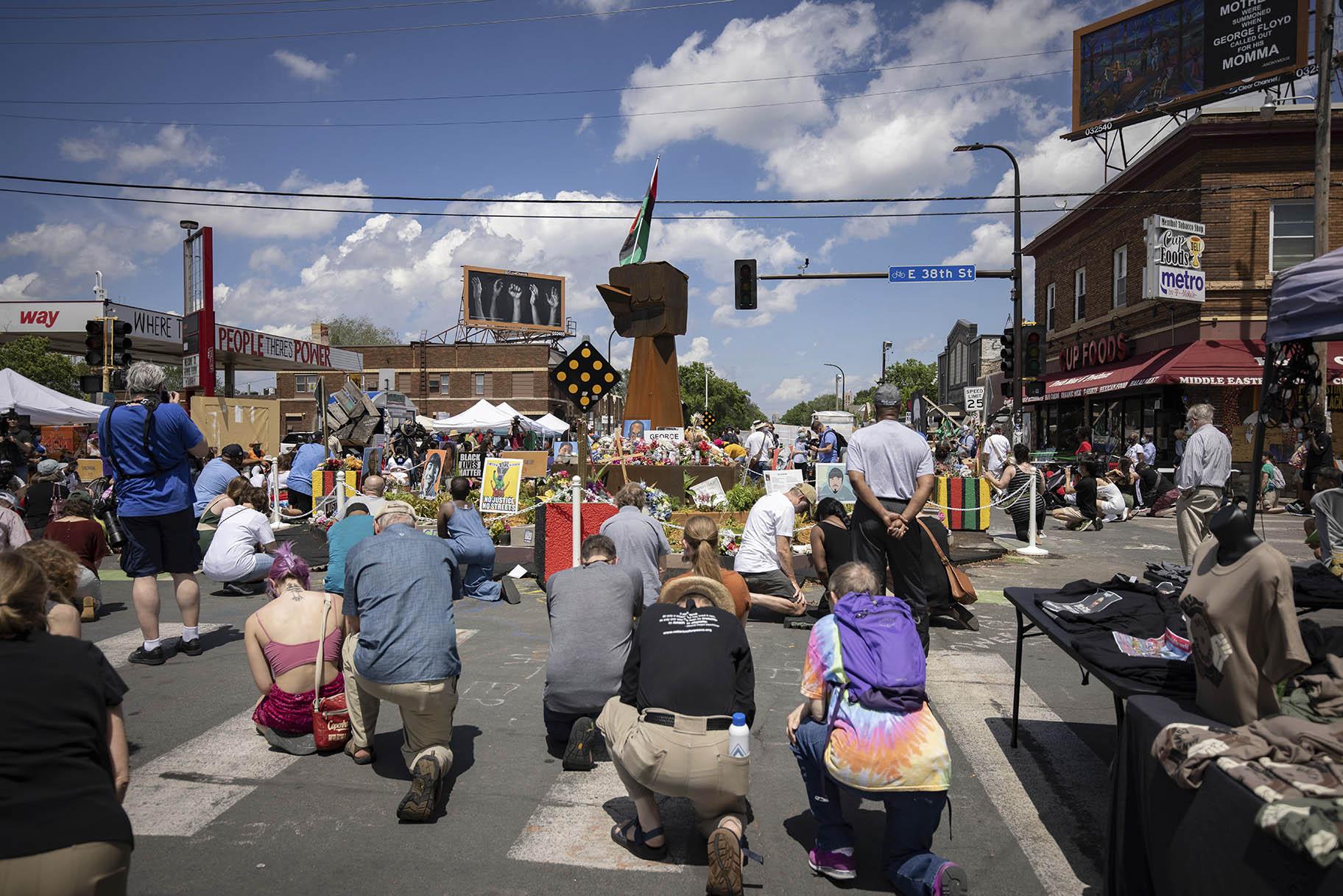 People take a knee during a moment of silence on the one year anniversary of George Floyd’s death on Tuesday, May 25, 2021, in Minneapolis, Minn. (AP Photo / Christian Monterrosa)

MINNEAPOLIS (AP) — A family-friendly street festival, musical performances and moments of silence were held Tuesday to honor George Floyd and mark the year since he died at the hands of Minneapolis police, a death captured on wrenching bystander video that galvanized the racial justice movement and continues to bring calls for change a year later.

Floyd’s sister Bridgett and other family members held a moment of silence at a “Celebration of Life” event at a downtown Minneapolis park that included music, food trucks, an inflatable bouncy house and a pop-up vaccination stand. A few miles away, at the site of the intersection where Floyd died, dozens of people gathered around a steel fist sculpture and kneeled for several minutes — symbolic of the 9 minutes, 29 seconds during which Floyd was pinned to the ground.

“It’s been a troubling year, a long year,” Bridgett Floyd told the crowd in downtown Minneapolis. “But we made it. … The love is very outpouring today. The love is here. George is here.”

Other members of Floyd’s family met with President Joe Biden and Vice President Kamala Harris in Washington, who urged Congress to quickly pass a law in Floyd’s name that would bring changes to policing. A moment of silence to honor Floyd was also held in New York and a rally was held in Los Angeles. Globally, a rally took place in Germany and Floyd’s death was marked by U.S. embassies in Greece and Spain.

Hours before the festivities began in Minneapolis, the intersection where Floyd died was disrupted by the sound of gunfire.

Associated Press video from 38th Street and Chicago Avenue — informally known as George Floyd Square — showed people running for cover as shots rang out. Police said a man, who they believe was injured in the shooting, went to a nearby hospital with a gunshot wound. Police spokesman John Elder said he was in critical condition but was expected to survive. No one was in custody by midday. 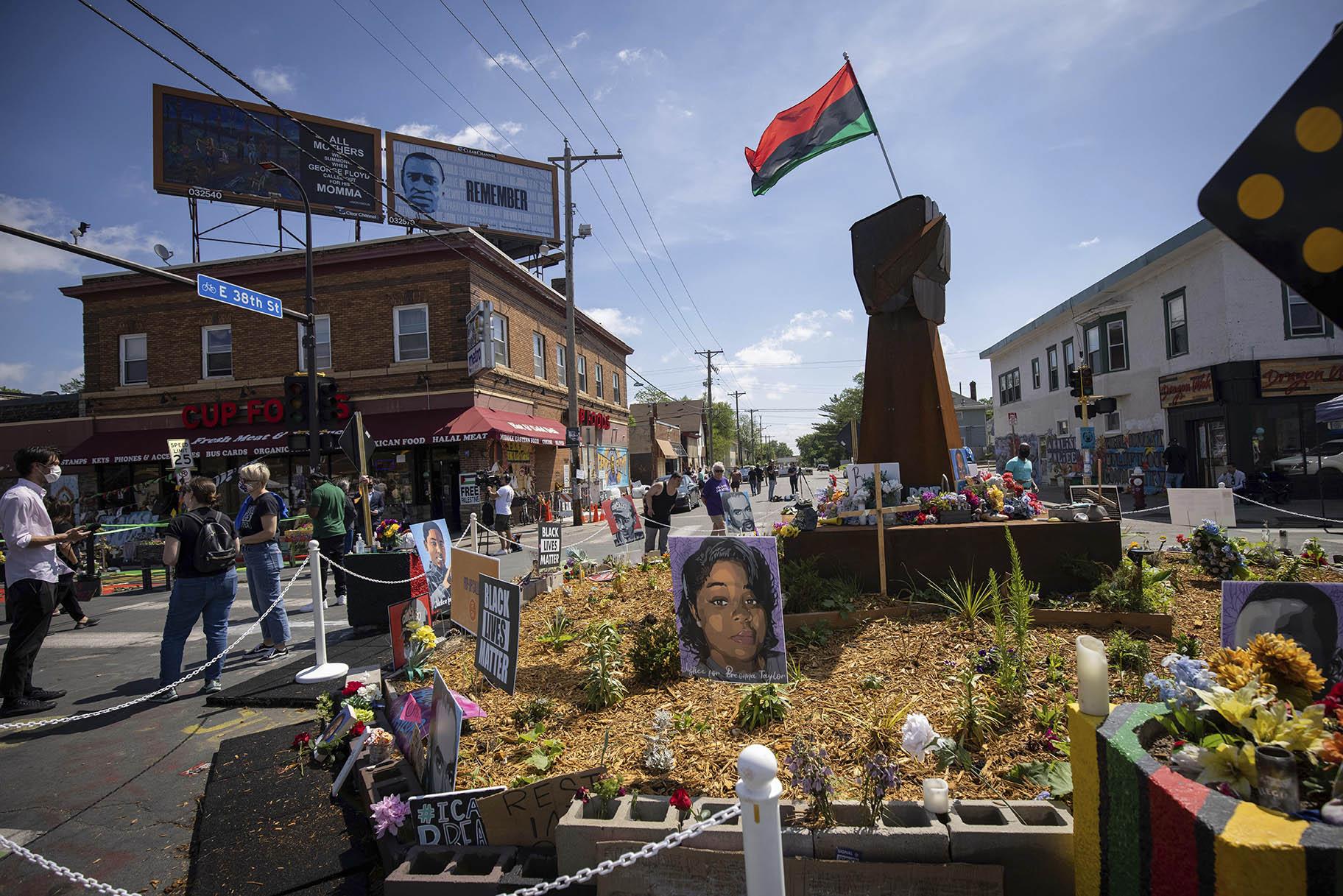 People walk through George Floyd Square after shots were fired on the one year anniversary of George Floyd’s death on Tuesday, May 25, 2021, in Minneapolis. (AP Photo / Christian Monterrosa)

Philip Crowther, a reporter working for AP Global Media Services, which provides live video coverage, reported hearing as many as 30 gunshots about a block from the intersection. Crowther said a storefront window appeared to have been broken by gunshots.

“Very quickly things got back to normal,” Crowther said. “People here who spend a significant amount of time, the organizers, were running around asking, ‘Does anyone need a medic?’”

Like other major cities, Minneapolis has been struggling with rising gun violence, a problem made worse, in part, by many officers leaving the embattled force since Floyd’s death. A 6-year-old girl was fatally shot and two other children wounded in recent weeks. Minneapolis Mayor Jacob Frey last week unveiled sweeping public safety proposals aimed at fixing the problem.  Other groups are pursuing a more radical remaking of the police department.

The intersection of 38th and Chicago has been barricaded since soon after Floyd’s death. It quickly turned into a memorial — and also a challenging spot for the city, with police officers not always welcome.

The square was transformed Tuesday into an outdoor festival, with food, children’s activities and a long list of musical performers. The “Rise and Remember George Floyd” celebration includes a candlelight vigil and caps several days of marches, rallies and panel discussions about his death and confronting racial discrimination.

Xavier Simmons, a 24-year-old organizer from Racine, Wisconsin, chanted “Say his name!” as the crowd kneeled before the fist sculpture. Simmons said he hopes people taking part in the festivities will both honor Floyd’s life and legacy and continue to “uplift and empower this movement.”

“We got the verdict that we needed, but it’s never going to change until we make a change,” he said.

Floyd, 46, who was Black, died May 25, 2020, after then-Officer Derek Chauvin knelt on his neck, pinning him to the ground for about 9 1/2 minutes. Chauvin, who is white, was convicted last month of murder and faces sentencing June 25. Three other fired officers still face trial.

Earl Vaughn, 20, of Minneapolis, went to the event in downtown Minneapolis to show support for Floyd’s family. Despite the event’s celebratory atmosphere, Vaughn said: “For all this a Black man had to die, so that’s really unfortunate.”

In New York City, elected officials, including Mayor Bill de Blasio and U.S. Rep. Hakeem Jeffries, joined the Rev. Al Sharpton in kneeling for 9 minutes, 29 seconds. “As we took a knee, imagine how long that was on a human being’s neck,” Sharpton said. “Never switched knees, just dug in. It’s time we correct policing in this country.” 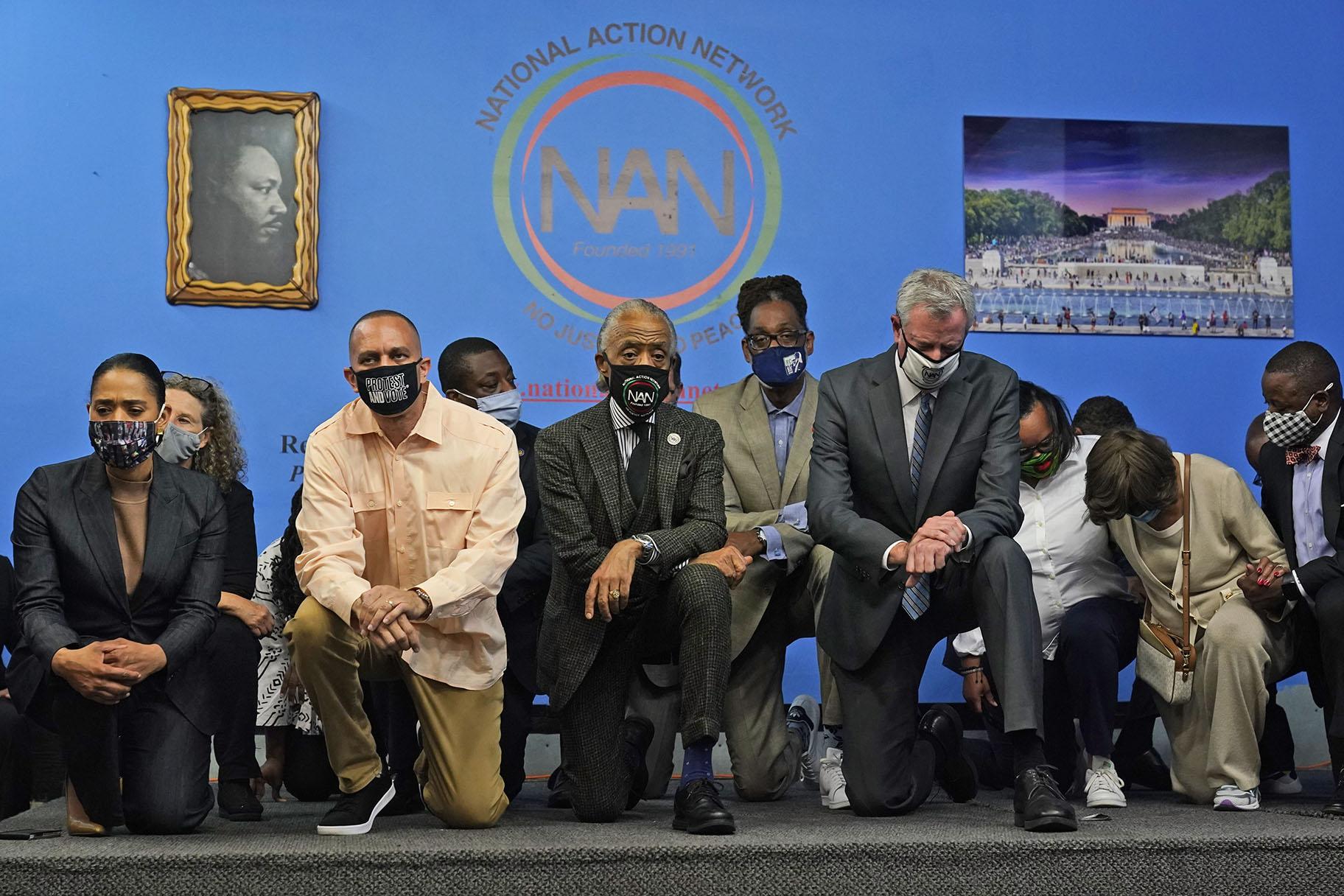 Several Floyd family members, including his young daughter Gianna, met with Biden and Harris on Tuesday. Biden had called family members after the Chauvin verdict and pledged to continue fighting for racial justice.

On Tuesday, he recalled how Gianna told him on the eve of Floyd’s funeral that “Daddy changed the world.” He said in a statement that Floyd did bring change, but that real change must include accountability and trust in the justice system. He said he hopes the George Floyd Justice in Policing Act can pass the Senate and get to his desk quickly.

“We have to act,” he said of the legislation that would ban chokeholds and no-knock police raids and create a national registry for officers disciplined for serious misconduct.

Harris also called on Congress to move “with a sense of urgency. Passing legislation will not bring back those lives lost, but it will represent much needed progress. We must address racial injustice wherever it exists. That is the work ahead.”

Bridgett Floyd told the crowd in Minneapolis: “We don’t want a watered down bill … My message to the president: Get your people in order … We’re going to continue to fight this good old fight.”

Floyd’s brother Philonise, who appeared on CNN, said he thinks about George “all the time.”

“My sister called me at 12 o’clock last night and said ‘This is the day our brother left us,’” he said, adding: “I think things have changed. I think it is moving slowly but we are making progress.”

Also Tuesday, the U.S. Senate voted to confirm Kristen Clarke as assistant attorney general for civil rights, the first Black woman to hold the position. In the last few weeks, the Justice Department under Biden has announced sweeping investigations into the police in Minneapolis and Louisville and brought federal civil rights charges against the officers involved in Floyd’s death, including Chauvin.

Separately, the Floyd family announced the launch of a fund that will make grants to businesses and community organizations in the neighborhood, as well as broader grants “encouraging the success and growth of Black citizens and community harmony.” The money comes from $500,000 earmarked as part of the city’s $27 million civil settlement for the Floyd family earlier this year.