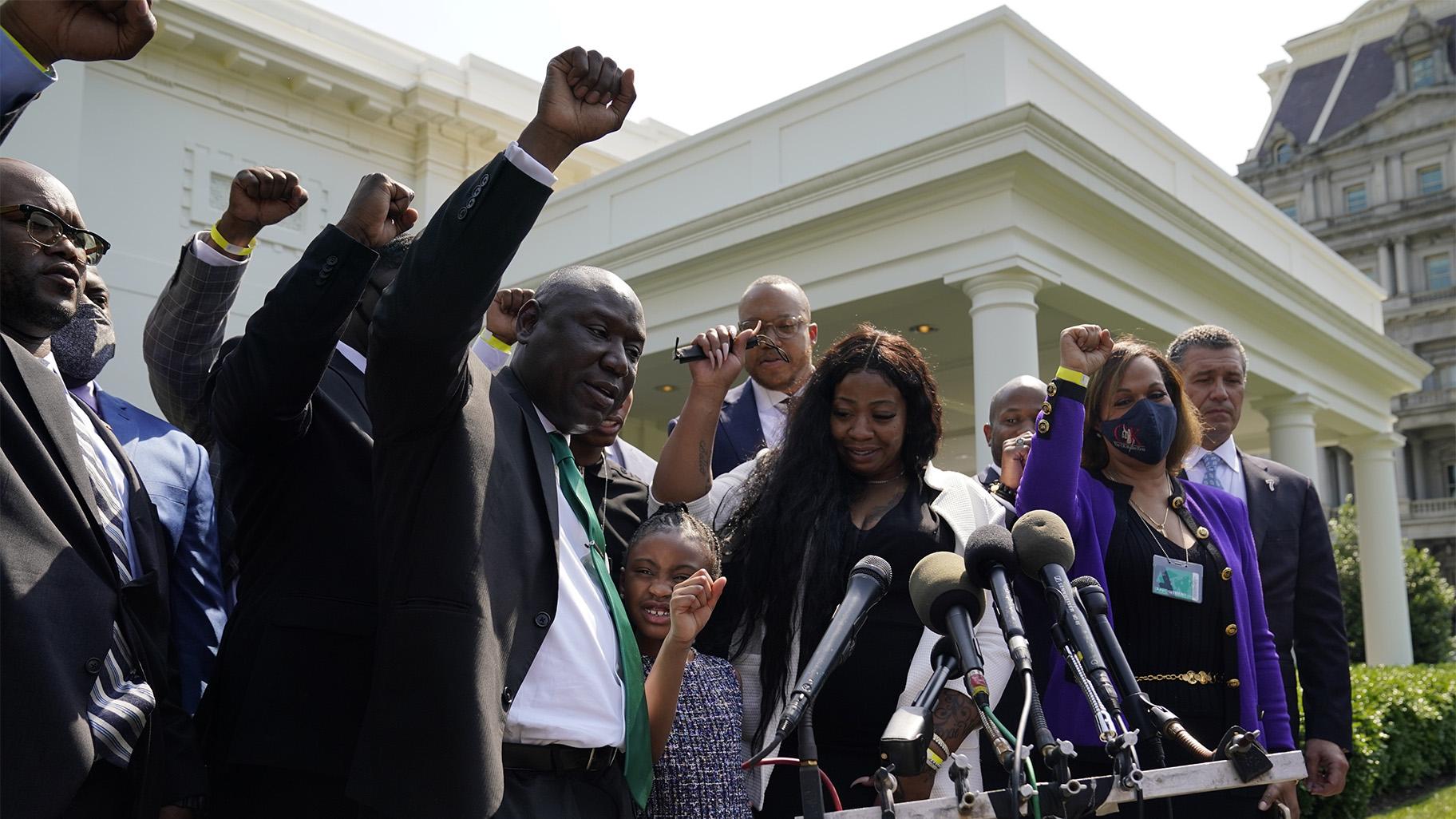 Benjamin Crump, front center, along with Gianna Floyd, daughter of George Floyd, and her mother Roxie Washington, and others talk with reporters after meeting with President Joe Biden at the White House, Tuesday, May 25, 2021, in Washington. (AP Photo / Evan Vucci)

WASHINGTON (AP) — They mourned together and laughed together in the Oval Office -- and spoke of what President Joe Biden called “the hard reality that racism has long torn us apart.”

The first anniversary of George Floyd’s death was supposed to be a milestone moment in Washington, a time to mark the passage of a policing law to make the criminal justice system more just. Instead, Floyd’s family met with Biden and Vice President Kamala Harris at the White House on Tuesday to commemorate their loss and continue to push for legislation.

“It was a remembrance of what happened to my brother,” Philonise Floyd said of the meeting with Biden, calling the president “a genuine guy.”

Biden told them “he just wants the bill to be meaningful and that it holds George’s legacy intact,” said George Floyd’s nephew Brandon Williams. Williams said Biden showed “genuine concern” for how the family is doing.

Biden took time during the meeting to play with George Floyd’s young daughter Gianna, who later stood before the cameras outside the White House and softly called out, “say his name.” Family members chanted in return: “George Floyd.”

A sister, Bridgett Floyd, stayed away, aiming to come to Washington only when there is a bill to be signed into law.

“That’s when I will make my way to D.C.,” she said from Minnesota.

She and several other family members joined Minneapolis Mayor Jacob Frey and others marking the anniversary in the city where George Floyd died, and other events took place in New York, Los Angeles and other cities in the U.S. and abroad.

With the proposed George Floyd Justice in Policing Act still pending on Capitol Hill, his family began their day meeting with legislators there and headed back later from the White House, prodding congressional negotiators.

They met Tuesday morning with House Speaker Nancy Pelosi and California Rep. Karen Bass, who ushered the bill through the House. The Floyds were set for individual meetings late in the day with Democratic Sen. Cory Booker of New Jersey and Republican Sen. Tim Scott of South Carolina, the Senate’s lead negotiators on the bill.

Speaking earlier at the Capitol alongside Pelosi and other lawmakers, Philonise Floyd declared of his brother: “Today is the day that he set the world in a rage.”

“We need to be working together to make sure that people do not live in fear in America any more,” he said.

Floyd died on May 25, 2020, after Minneapolis police officer Derek Chauvin kneeled on his neck for more than nine minutes while arresting him. His death sparked months of nationwide racial protests, a worldwide global reckoning over racism and a renewed debate over police reform. Chauvin was convicted last month of multiple charges.

A legislative response has been elusive. Still, Democratic and Republican negotiators remain optimistic, displaying a steady solidarity that’s unusual for such talks and never publicly sniping at each other.

“We hope to bring comfort to your family by passing the final bill very soon,” Speaker Pelosi told the family.

It’s a high-profile legislative fight in which Biden has notably taken a back seat, preferring to leave the work of crafting a compromise to lawmakers on Capitol Hill, in contrast to his fevered advocacy, both public and private, for his infrastructure bill and COVID-19 relief package.

“We have been respecting the space needed for negotiators to have these discussions,” White House press secretary Jen Psaki said Tuesday.

She and congressional negotiators declined to offer a new deadline for reaching an agreement. Bass, the top House Democratic bargainer, said talks would continue “until we get the job done.” Scott, the lead Republican bargainer in the Senate, said separately that negotiations “have a long way to go still, but it’s starting to take form.”

The Democratic-controlled House approved a sweeping bill in March that would make it easier for individual police officers to be sued and charged with crimes. It would also ban chokeholds, limit no-knock warrants and create a national database of officers with histories of complaints and disciplinary problems.

That bill has gone nowhere in the Senate, where the 50 Democrats will need support from at least 10 Republicans to overcome a bill-killing filibuster.

Floyd family lawyer Ben Crump said Biden told them that “he doesn’t want to sign a bill that doesn’t have substance and meaning.

“So he is going to be patient, to make sure it’s the right bill, not a rushed bill,” Crump said.

White House advisers say Biden and his team have been in frequent touch with Capitol Hill negotiators over the legislation, but they believe this is an issue in which a high-profile public campaign by the president may do more harm than good.

But some activists say they’d like to see the president be more outspoken in advocating for the bill.

“President Biden has left it to members of Congress, and it’s in their hands right now. But the president will need to step up to make sure we get it across the finish line,” said Judith Browne Dianis, executive director of the Advancement Project, a racial justice organization.

Still, it’s up to Congress, said Wade Henderson, interim president and CEO of The Leadership Conference on Civil and Human Rights, in a statement to the AP.

“It’s absolutely vital that members of Congress put partisan politics aside and pass meaningful reform to hold police officers responsible who act outside of their oath to protect and defend,” he said.

The chief stumbling block has been “qualified immunity,” which generally shields individual officers from civil lawsuits. Democrats have wanted to eliminate that protection while Republican Senate negotiator Scott has proposed retaining immunity for officers but allowing lawsuits against police departments.

While progressives and many criminal justice reform advocates are insistent that the bill eliminate protections for individual officers, some Democrats, most notably House Majority Whip Jim Clyburn of South Carolina and Senate Democratic Whip Dick Durbin of Illinois have said they could see a compromise on the issue. Senate Republican leader Mitch McConnell of Kentucky has said he wouldn’t support any bill that ended qualified immunity.

While the president is waiting for the bill to hit his desk, Biden’s aides have said the administration is doing what it can to deal with the incidents of police misconduct.

The Biden administration has signaled that the Justice Department will shift its focus to prioritize civil rights and policing reform after a tumultuous four years under President Donald Trump. In the past few weeks, the department has announced sweeping investigations into the police in Minneapolis and Louisville and brought federal civil rights charges against the officers involved in Floyd’s death, including Chauvin.

On Tuesday, as Floyd’s family was preparing to meet with Biden, the Senate voted to confirm Kristen Clarke as assistant attorney general for civil rights, the first Black woman to hold the position.