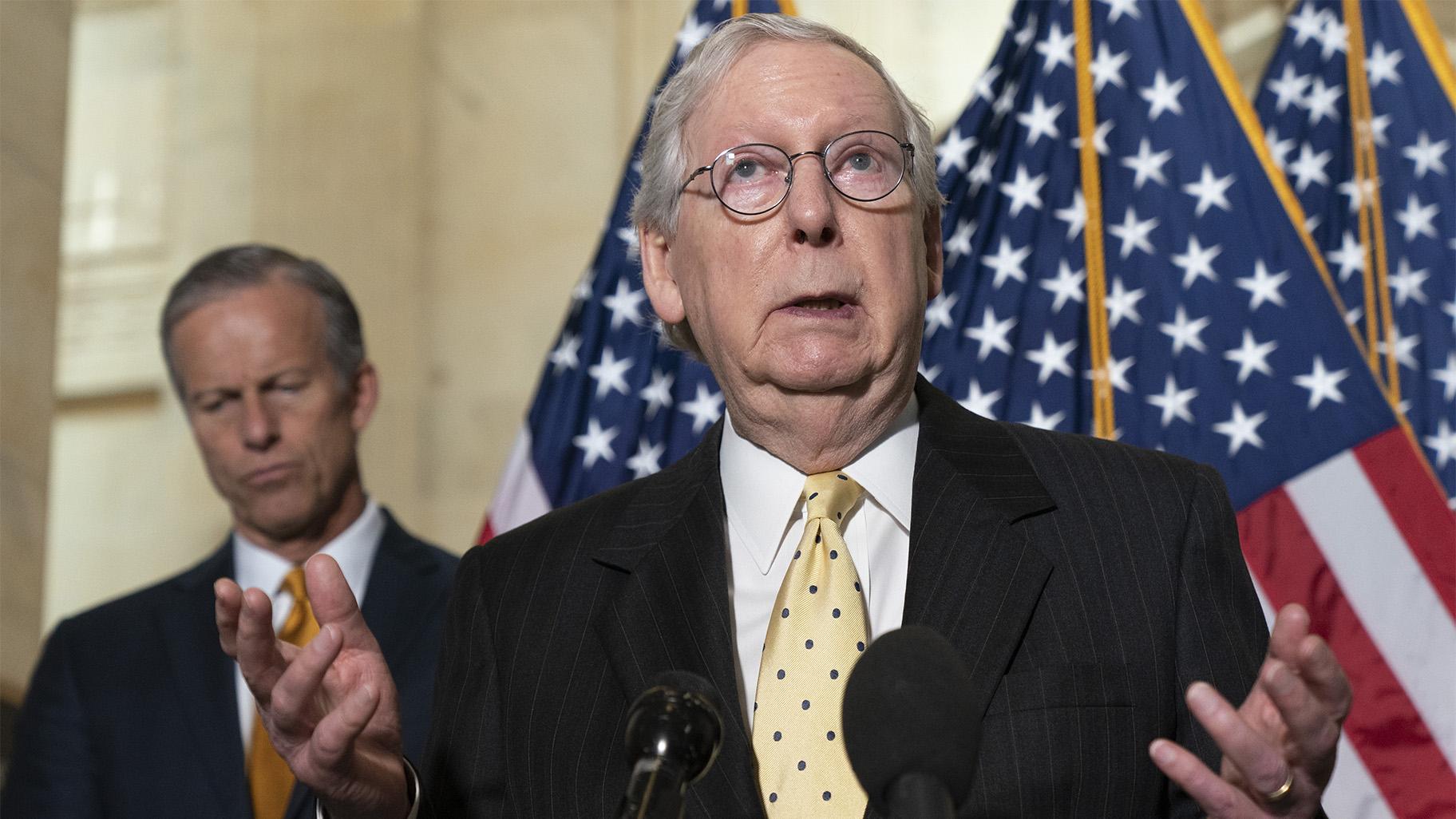 Senate Minority Leader Mitch McConnell of Ky., right, speaks to the media next to Sen. John Thune, R-S.D., Tuesday, May 18, 2021, after a meeting with Senate Republicans on Capitol Hill in Washington. (AP Photo / Jacquelyn Martin)

WASHINGTON (AP) — Top Republicans in Congress are working to stop the formation of an independent commission into the deadly Jan. 6 insurrection at the U.S. Capitol, aligning themselves with former President Donald Trump ahead of a Wednesday House vote on the proposal.

Senate Republican leader Mitch McConnell said Wednesday morning that he will oppose the legislation to create the panel, joining House GOP leader Kevin McCarthy, who announced Tuesday that he won’t support it. Both men claimed the bill was partisan, even though membership of the proposed commission would be evenly split between the parties.

McConnell’s announcement — which came just one day after he said he was “open” to the bill — is a blow to Democrats who say an independent, bipartisan investigation of the violent siege is crucial to prevent it from happening again. While the legislation is expected to pass the House, it will be harder for Democrats to win the 10 Republican votes they need in the Senate without McConnell’s backing.

Senate Majority Leader Chuck Schumer, D-N.Y., vowed to force a vote on the bill once the House passes it. He charged that Republicans are “caving” to Trump, who encouraged his supporters to head to Capitol Hill on Jan. 6 to stop the counting of the electoral votes and overturn his defeat to Democrat Joe Biden.

Schumer said that Republicans are trying to “sabotage the commission” and are “drunk” off Trump’s baseless claim that the election was stolen from him. That false assertion, repeated by the mob as the rioters broke into the Capitol, has been rebuked by numerous courts, bipartisan election officials across the country and Trump’s own attorney general.

Trump released a statement Tuesday night urging Republicans to oppose the commission. He called it a “Democrat trap.”

McConnell’s and McCarthy’s opposition comes as some in the GOP are increasingly downplaying the violence of Jan. 6, when rioters brutally beat police, broke in through windows and doors and hunted for lawmakers. Four of the rioters died, including a woman who was shot and killed by police as she tried to break into the House chamber. A Capitol Police officer collapsed and died after engaging with the protesters, and two officers took their own lives in the days after.

The vote is also emerging as yet another test of Republican loyalty to Trump, whose grip on the party remains strong despite his election defeat. House Republicans booted Wyoming Rep. Liz Cheney from their leadership last week for her criticism of Trump’s false claims, installing a Trump loyalist in her place. Cheney, in turn, suggested to ABC News that a commission could subpoena McCarthy because he spoke to Trump during the insurrection.

The two GOP leaders’ positions will almost certainly mean fewer Republicans will support the commission, as most in the party are still loath to upset Trump. But the votes in the House and Senate will also expose divisions in the party as some Republicans have said they think an independent review is necessary and are expected to defy Trump in Wednesday’s vote.

Debate over whether to support the commission has been playing out in private GOP meetings this week.

Several Republican lawmakers joined McCarthy in speaking against it early Tuesday during a meeting of House Republicans, according to one Republican familiar with the closed-door session who spoke on condition of anonymity to discuss it. The Republican who negotiated the bill with Democrats, New York Rep. John Katko, argued in favor.

“I feel a deep obligation to get the answers U.S. Capitol Police and Americans deserve and ensure an attack on the heart of our democracy never happens again,” Katko said in a statement.

In a private Senate lunch, Missouri Sen. Roy Blunt recommended that his colleagues oppose the commission. Blunt, the top Republican on the Senate Rules Committee, is working on a bipartisan report with his Democratic colleagues that will include recommendations for security upgrades. He said an independent investigation would take too long and “frankly, I don’t think there are that many gaps to be filled in on what happened on Jan. 6, as it relates to building security.”

Other Senate Republicans support the commission. Utah Sen. Mitt Romney said Tuesday that given the violent attack, “we should understand what mistakes were made and how we could prevent them from happening again.” Louisiana Sen. Bill Cassidy said he doesn’t agree with McConnell that the bill is slanted toward Democrats and “I’m inclined to support it.”

Maine Sen. Susan Collins, a Republican, said that she supports the idea of a commission but that the House bill would need adjustments. She echoed McConnell’s concerns that the chair of the commission, who will be appointed by Democrats, would have more power to hire staff. The bill directs the chair to hire employees “in consultation with” the vice chair, who would be appointed by Republicans.

Romney, Cassidy and Collins were among the seven Republican senators who joined 50 Democrats in voting to convict Trump at his second impeachment trial in February. But the vote fell short of the two-thirds needed to convict him of inciting the insurrection. Had Trump been convicted, the Senate could have barred him from seeking public office again.

South Dakota Sen. John Thune, the No. 2 Republican in the Senate, cited concern in the caucus that the investigation could be “weaponized politically” in the 2022 election cycle.

“I want our midterm message to be about the kinds of issues that the American people are dealing with,” Thune said. “It’s jobs and wages and the economy, national security, safe streets, strong borders and those types of issues, and not relitigating the 2020 election.”

Modeled after the investigation into the Sept. 11, 2001, attacks, the House bill would establish an independent, 10-member commission that would make recommendations for securing the Capitol and preventing another insurrection. It would have to issue a final report by Dec. 31.

House Speaker Nancy Pelosi, D-Calif., called McCarthy’s opposition to the commission “cowardice.” She released a February letter from the GOP leader in which he asked for an even split of Democrats and Republican commissioners, equal subpoena power and no predetermined findings or conclusions. The bipartisan legislation accommodates all three of those requests, she said.

“Leader McCarthy won’t take yes for an answer,” she said. 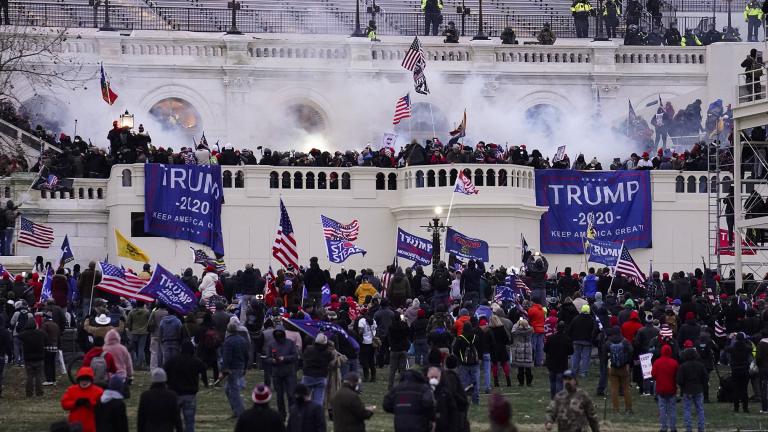 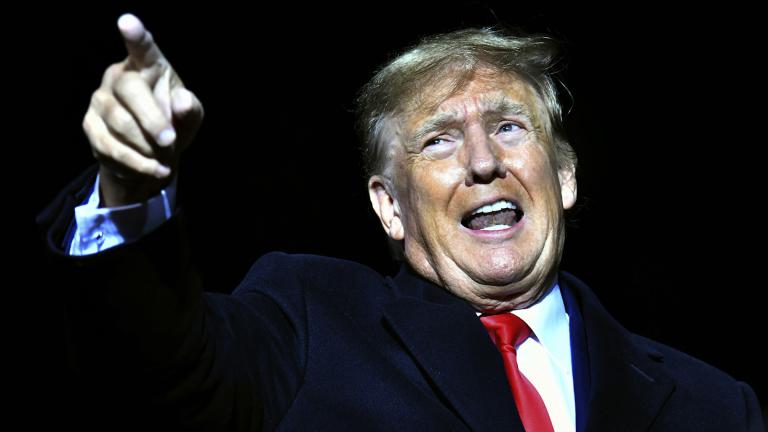 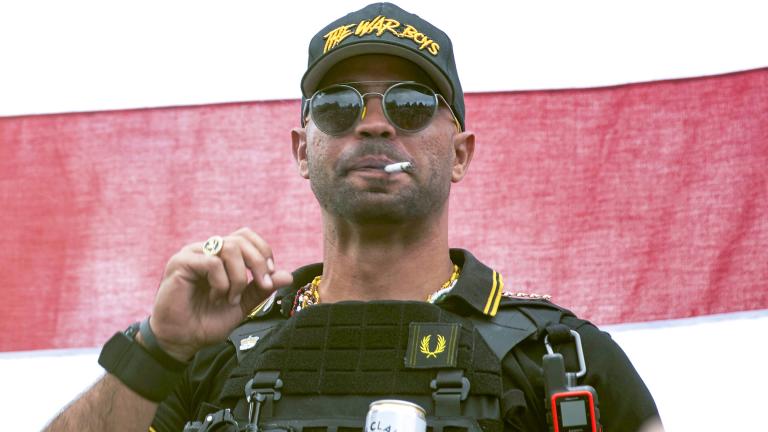