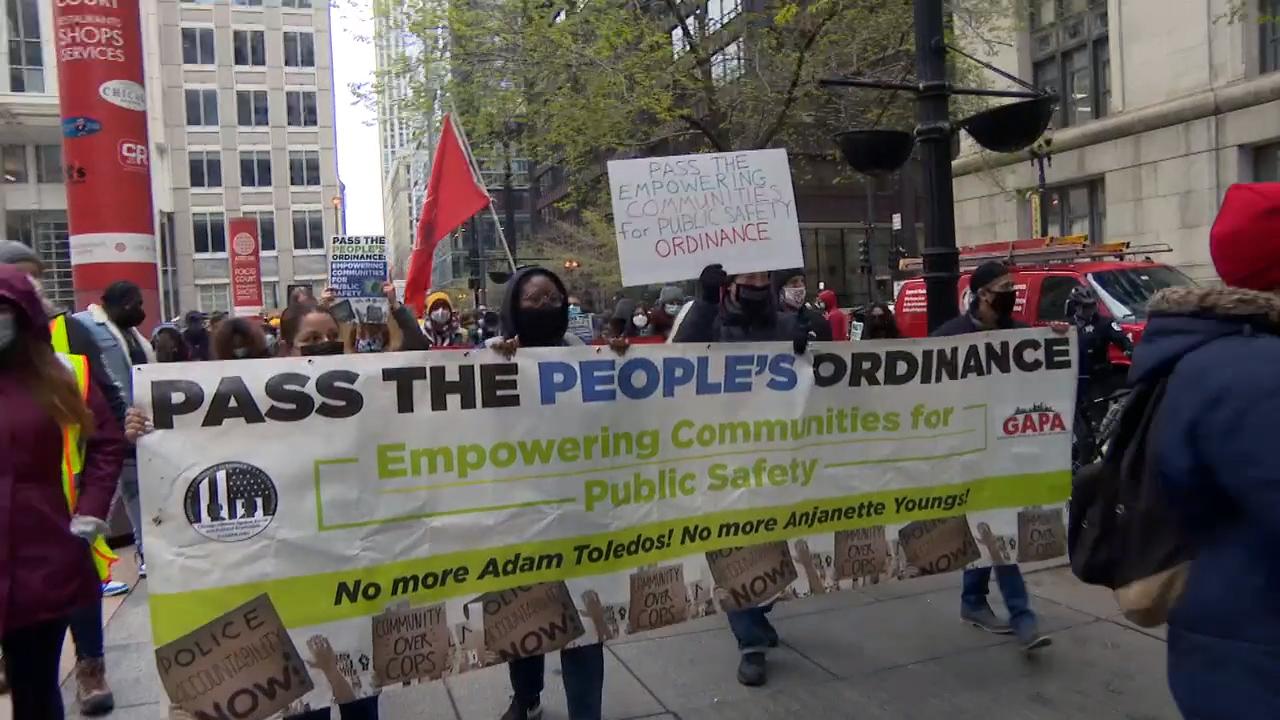 The Chicago City Council’s Black Caucus endorsed on Monday a long-stalled plan to put an elected board of Chicago residents in charge of the Chicago Police Department, joining the City Council’s two other major caucuses in a revolt against Mayor Lori Lightfoot.

Eight months ago, Lightfoot promised to introduce her own plan for an elected board to oversee the CPD after she dropped her support for the measure crafted by a coalition of community organizations under the umbrella of the Grassroots Association for Police Accountability, known as GAPA, saying it would limit her ability to keep the city safe.

Lightfoot has yet to do introduce her own plan despite telling reporters for months it was on the verge of being introduced. The mayor’s office did not immediately respond to a request for comment from WTTW News on Monday afternoon.

Lightfoot’s decision to drop her support of GAPA put her at odds with several of her allies on the Chicago City Council, and ultimately led to supporters of GAPA joining forces with the supporters of a competing proposal known as CPAC to craft a compromise measure known as Empowering Communities for Public Safety.

With the backing of all three of the City Council’s major caucuses, the compromise measure likely has at least the 26 votes it needs to pass the City Council as well as the 34 votes needed to override a mayoral veto, Ald. Carlos Ramirez-Rosa (35th Ward) said.

The last veto of a City Council action came in 2006 when former Mayor Richard M. Daley vetoed a measure that would have required big-box stores like Walmart to pay employees at least $10 an hour by 2010. The city’s minimum wage will rise to $15 an hour on July 1.

Typically, a substantive piece of legislation like the creation of an elected board to oversee the police department would be unlikely to pass without the support of the mayor — but the City Council may be poised to buck Lightfoot, who was elected after leading the city’s response to the police murder of Laquan McDonald and vowed during the campaign to reform the beleaguered Chicago Police Department once and for all.

However, approaching the midpoint of her four-year term, Lightfoot’s standing has been weakened by the uproar surrounding a botched police raid that left a social worker naked and begging officers for help as well as the police shooting of 13-year-old Adam Toledo.

Chicago is “on the verge of fundamentally transforming a broken policing system,” according to a statement from the Black Caucus.

“We cannot wait any longer for change,” said Ald. Roderick Sawyer (6th Ward), a member of the Black Caucus. “As a coalition of city council members, legal experts, community organizations and residents, we have thoroughly examined the issue of police accountability in Chicago and created the right solution for the right time. It’s time to pass this bill.”

The proposal would create a two-tiered system of accountability for police officers by focusing on each of the 22 police districts as well as citywide.

The board would have the power to hire and fire the head of the Civilian Office of Police Accountability, known as COPA, the agency charged with investigating officer misconduct, and would have the final say on policy disputes between the police department and its two oversight agencies: COPA and the Police Board, which disciplines officers.

The issue of the ultimate authority on policy was what derailed the passage of the ordinance crafted by GAPA in March 2020. Lightfoot demanded that the mayor have the power to resolve any disputes, while the proposal from GAPA would give the ultimate decision-making power to the commission. A two-thirds vote of the City Council could overturn a decision by the commission.

In addition, Lightfoot objects to giving the elected oversight board the power to trigger City Council hearings and action with a no-confidence vote in the superintendent, the president of the Police Board and the head of COPA.

CPAC would have given an elected board the power to hire and fire the superintendent. Lightfoot has rejected that proposal as too far-reaching, saying that as mayor she “wears the jacket” for public safety.

A binding referendum, which could go to voters in 2022, could give the 11-member board the power to hire and fire the superintendent, negotiate contracts with the police department’s labor unions and set the Chicago Police Department’s budget. The mayor would appoint two members of the board if the referendum is approved.

Supporters of an elected police oversight board hoped the push would get new life after the police killing of George Floyd touched off nationwide protests in May 2020, but Lightfoot left that proposal off a list of reforms she introduced and vowed to implement in 90 days. Despite the outcry, Chicago has not made any changes to the way the police department operates, or holds officers accountable for misconduct, after Floyd’s murder.