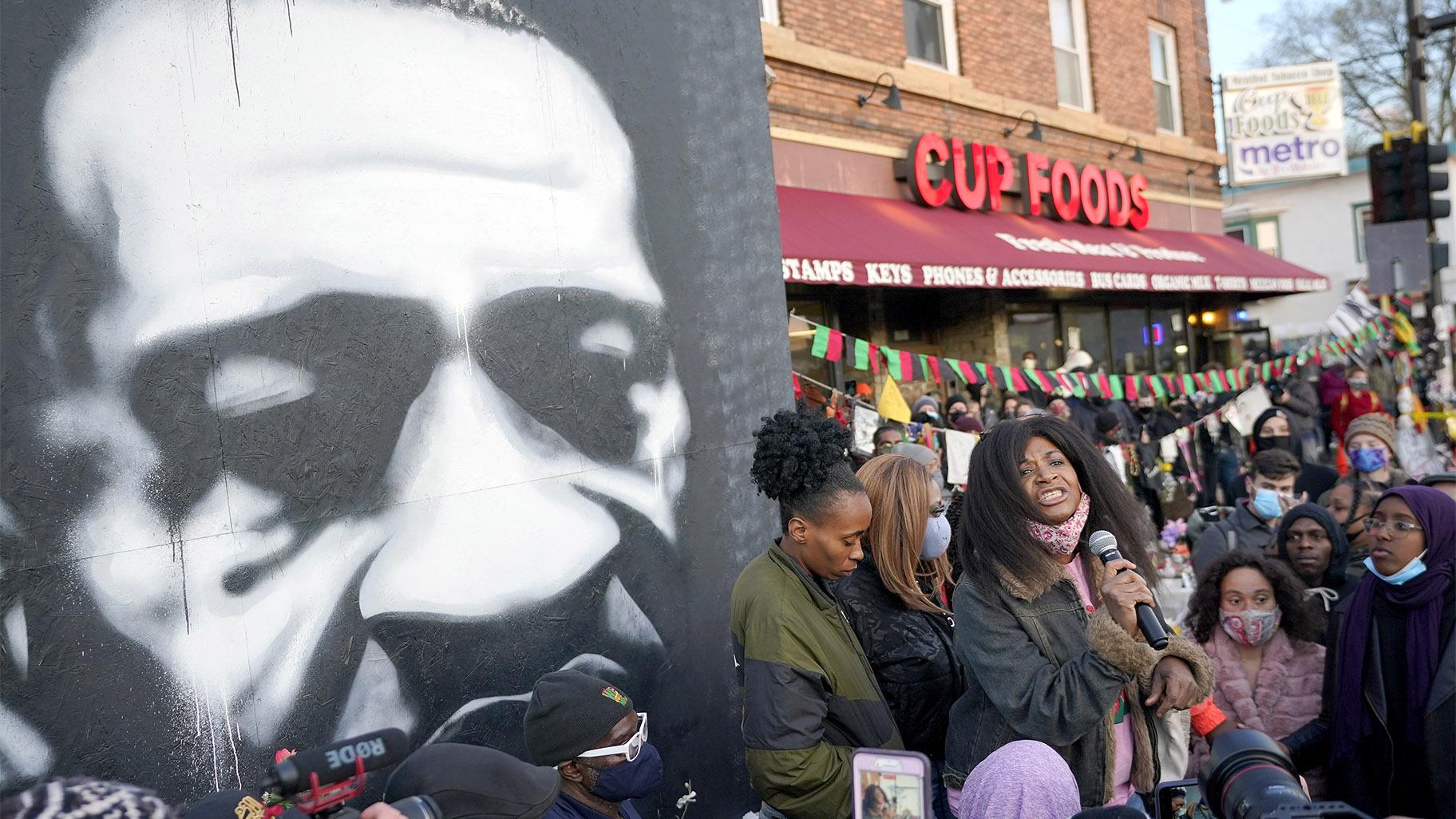 Angela Harrelson, right, aunt of George Floyd, talks to supporters at George Floyd Square after a guilty verdict was announced at the trial of former Minneapolis police Officer Derek Chauvin for the 2020 death of Floyd, Tuesday, April 20, 2021, in Minneapolis. Chauvin has been convicted of murder and manslaughter in the death of Floyd. (AP Photo / Julio Cortez)

PHILADELPHIA (AP) — Moments after former officer Derek Chauvin was convicted of murder in George Floyd's death, copies of the original Minneapolis police statement began recirculating on social media. It attributed Floyd's death to “medical distress” and made no mention that the Black man had been pinned to the ground at the neck by Chauvin, or that he'd cried out that he couldn't breathe.

Many were posting the release to highlight the distance between the initial police narrative and the evidence that led to the conviction Tuesday, including excruciating video shot by a teenage bystander of Chauvin with his knee on Floyd's neck, even after Floyd had stopped moving.

“If it wasn’t for this 17-year-old who took the video, Derek Chauvin would in all likelihood still be on the police force training officers,” said Andre Johnson, a University of Memphis professor of communication studies. “Sadly, this has been going on for a while, and it’s just now coming to light for a lot of Americans because of video evidence.”

For their part, police officials say they give the most accurate information they can during fast-moving and complicated investigations. But the frequency with which misleading information is published cannot be ignored, critics say.

In 2014, the New York Police Department's narrative of Eric Garner's death was that he'd gone into cardiac arrest. It made no mention of an officer's extended chokehold on Garner, shown in a bystander video that captured repeated pleas that he couldn't breathe. A grand jury declined to indict the since-fired officer Daniel Pantaleo, who said he was using a legal maneuver called a seat belt.

A year later, then-policeman Michael Slager said he shot Walter Scott because he'd grabbed for the officer's stun gun. But bystander video of the North Charleston, South Carolina, shooting showed Slager chase Scott after he fled a traffic stop and fatally shoot him in the back. Slager was charged with murder in state court, but released after a hung jury. He later pleaded guilty to federal civil rights violations.

As the chorus of complaints about misinformation on such interactions grows, so do calls for body cameras for police. Roughly 80% of departments with 500 officers or more are now using cameras, but video storage can be costly.

Official police video is also increasingly showing discrepancies in initial police narratives, though generally the images are withheld for days or sometimes months during internal investigations.

Chicago police were ordered by a court to release dashcam video of the 2014 killing of 17-year-old Laquan McDonald more than 13 months after the shooting. It was initially ruled a justified shooting based on an officer narrative that McDonald had approached police while refusing to drop a knife. The video showed then-officer Jason Van Dyke shooting the teen 16 times as he walked away. Van Dyke was found guilty of second-degree murder.

Johnson said it shouldn’t take video evidence of Black Americans being mistreated or killed for people to support policing changes. He noted that when there is video evidence, it's often scrutinized and still rejected by some as fake or deceptive.

“Why does it have to take the video evidence, the activism, the testimony?" asked Johnson, who is Black. "It takes all that because since the inception of policing, we as Americans have taken the police at their word. But this is nothing new to communities of color.”

“The question is, Have police now begun to lose the default position that they’re truthful?” he said. “I think it’s beginning to erode.”

Police and prosecutors in several cities have released body camera videos more quickly after recent fatal encounters. Some experts say that's in part to quell the potential for large-scale protests against racial injustice and police brutality that took place nationwide after Floyd's death. Others say it's a move to regain the trust of the community amid demands for transparency.

The release was a departure from the Columbus Division of Police protocol, and it came as the agency faces immense public scrutiny following two other high-profile killings by city police and one by the county sheriff’s department in Columbus since Dec. 3.

Meanwhile, in Tennessee, a district attorney came under fire for initially refusing to release body camera video after an officer shot and killed a student in a Knoxville high school April 12.

But, after Allen released the video Wednesday to comply with a judge's order, it showed Thompson was holding a handgun in his sweatshirt front pocket, fired only one shot and didn’t strike any of the four officers. It was Clabough who accidentally shot fellow Officer Adam Wilson during the scuttle, officials said.

Allen told reporters she had spoken extensively with Thompson's family, who begged her not to release the video so close to his funeral.

“My preference would be not to do this today, but I’m under pressure from you (the media), from politicians and activist groups,” she said. “I get it. You should be able to see the video. I just think the timing, we have to come up with a better process.”

In Minneapolis, police spokesperson John Elder previously told The Associated Press that he did not visit the scene on May 25, 2020, as he usually does after major events, and he was not able to review body camera footage of Floyd’s death for several hours. Elder released the initial description after being briefed by supervisors, who he learned later also had not been to the scene.

After the bystander video surfaced, the department realized the statement was inaccurate and immediately requested an FBI investigation, he said. By then, state investigators had taken over, and he was unable to issue a corrected statement.

“I will never lie to cover up the actions of somebody else,” Elder said.