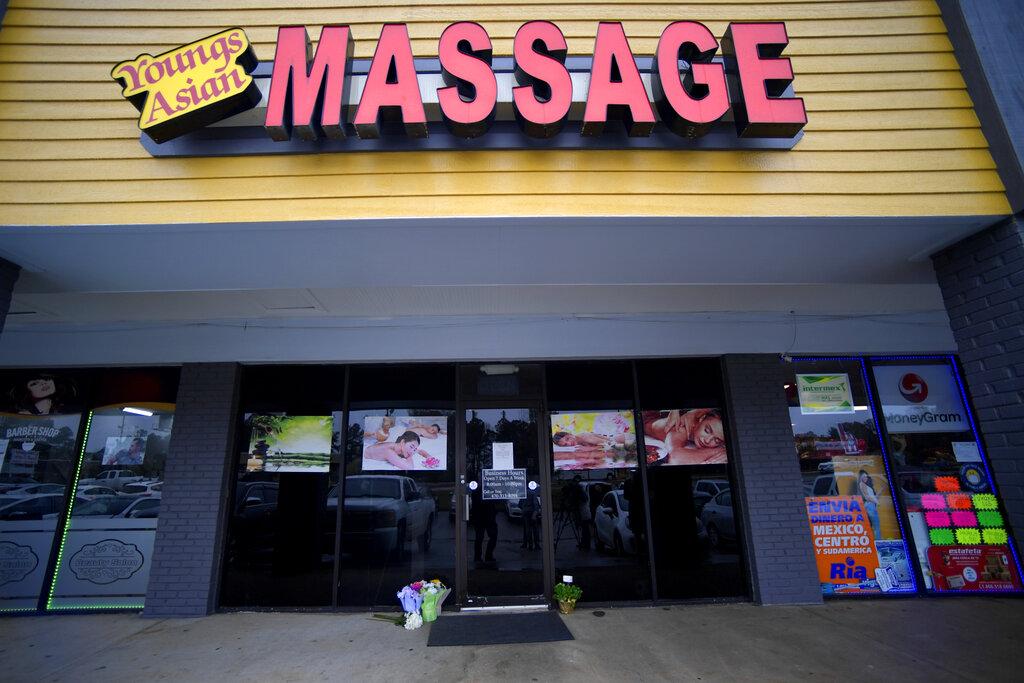 A makeshift memorial is seen Wednesday, March 17, 2021 outside a business where a multiple fatal shooting occurred on Tuesday, in Acworth, Ga. (AP Photo / Mike Stewart)

ATLANTA (AP) — A white gunman accused of killing eight people, most of them of women of Asian descent, at three Atlanta-area massage parlors was charged with murder Wednesday in an attack that sent terror through the Asian American community that’s increasingly been targeted during the coronavirus pandemic.

Robert Aaron Long, 21, told police the attack was not racially motivated, claiming to have a “sex addiction” and apparently he lashed out at what he saw as sources of temptation. Six of the victims were identified as Asian and seven were women.

The shootings appear to be at the “intersection of gender-based violence, misogyny and xenophobia,” Georgia state Rep. Bee Nguyen said, the first Vietnamese American to serve in the Georgia House and a frequent advocate for women and communities of color.

Atlanta Mayor Keisha Lance Bottoms said that regardless of the shooter’s motivation, “it is unacceptable, it is hateful and it has to stop.”

The attack was the sixth mass killing this year in the U.S., and the deadliest since the August 2019 Dayton killing that took the lives of nine people, according to a database compiled by The Associated Press, USA Today and Northeastern University. 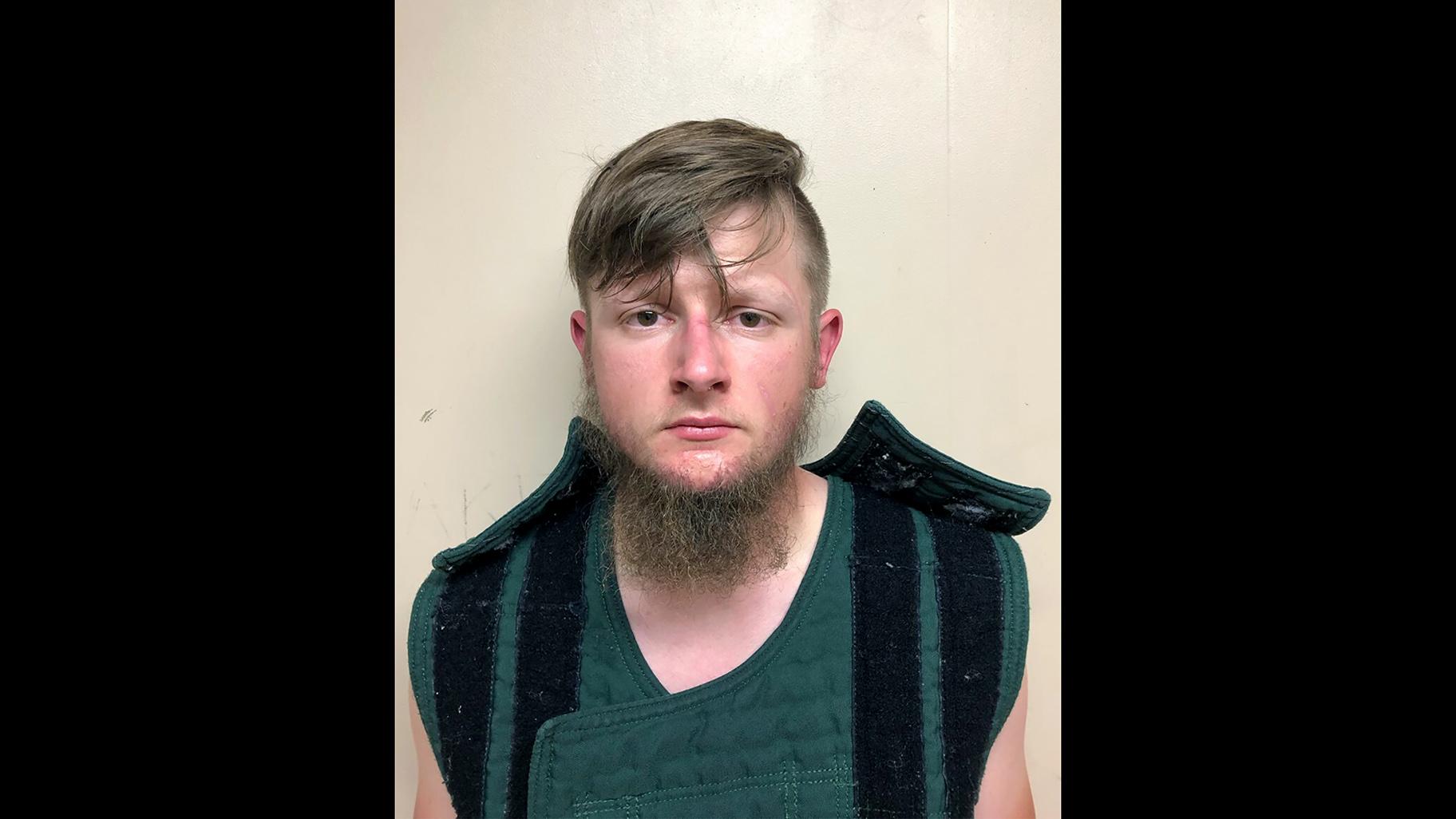 “He apparently has an issue, what he considers a sex addiction, and sees these locations as something that allows him to go to these places, and it’s a temptation for him that he wanted to eliminate,” Cherokee County Sheriff’s spokesman Capt. Jay Baker told reporters.

When asked by a reporter whether the businesses were a place where somebody could have sexual encounters, Bottoms did not answer, saying she did not want “to get into victim blaming, victim shaming here.”

Sheriff Frank Reynolds said it was too early to tell if the attack was racially motivated — “but the indicators right now are it may not be.” Authorities in Cherokee County say Long was charged Wednesday with four counts of murder and one count of assault.

The attack follows a lull in mass killings during the pandemic in 2020, which had the smallest number of such assaults in more than a decade, according to the database, which tracks mass killings defined as four or more dead, not including the shooter.

Many suspects who commit mass shootings have a history of violence against women. Still, the attack haunted members of the Asian American community who saw the shootings as an attack on them, given a recent wave of assaults  that coincided with the spread of the coronavirus across the United States. The virus was first identified in China, and then-President Donald Trump and others have used racially charged terms like “Chinese virus” to describe it. 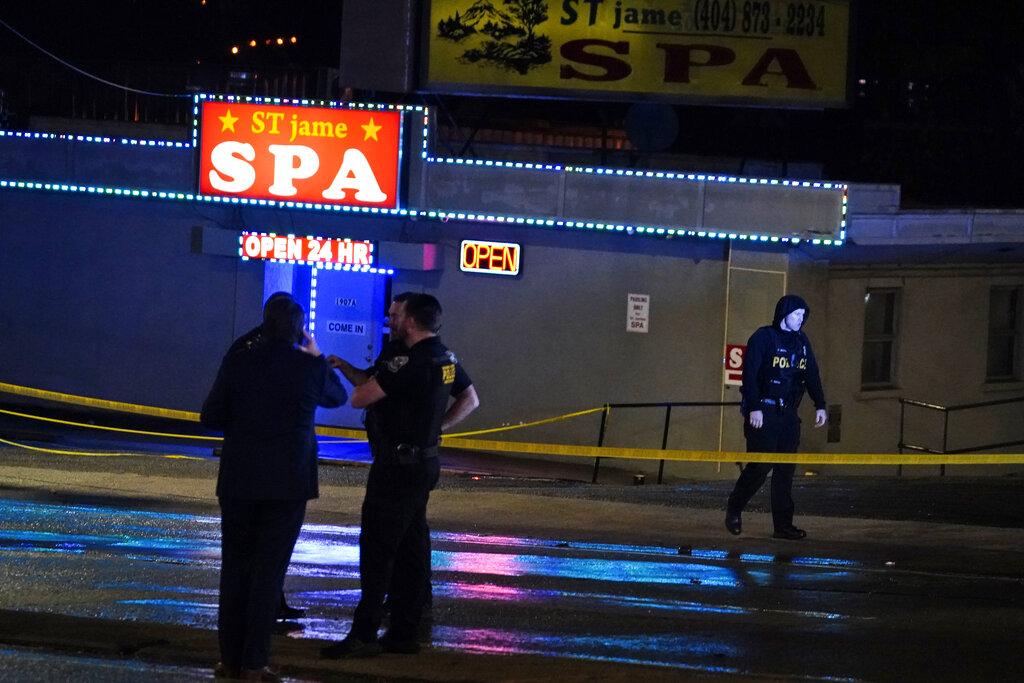 The attacks began Tuesday evening, when five people were shot at Youngs Asian Massage Parlor near Woodstock, about 30 miles (50 kilometers) north of Atlanta, Baker, the sheriff’s spokesman, said. Two people died at the scene, and three were taken to a hospital where two died, he said.

About an hour later, police responding to a call about a robbery found three women dead from apparent gunshot wounds at Gold Spa, which is located in a strip of tattoo parlors and strip clubs in one of the last ungentrified holdouts in an upscale area of Atlanta. Officers then learned of a call reporting shots fired across the street, at Aromatherapy Spa, and found another woman apparently shot dead.

President Joe Biden said the FBI briefed him on the shootings and noted that Asian Americans have grown concerned about a recent rise in violence against them, a surge he has previously condemned.

“I think it is very, very troublesome, but I am making no connection at this moment to the motivation of the killer,” Biden said in the Oval Office. “I am waiting for an answer, as the investigation proceeds, from the FBI and from the Justice Department.”

The FBI is assisting Atlanta and Cherokee County authorities in the investigation.

Vice President Kamala Harris expressed support to the Asian American community, as she sent condolences to the victims’ families.

“We’re not yet clear about the motive. But I do want to say to our Asian American community that we stand with you and understand how this has frightened and shocked and outraged all people,” said Harris, who is the first Black and South Asian woman to hold the office of vice president.

Over the past year, thousands of cases of abuse have been reported to an anti-hate group that tracks incidents against Asian Americans, and hate crimes in general are at the highest level in more than a decade.

“We are heartbroken by these acts of violence,” Asian Americans Advancing Justice — Atlanta said in a statement. “While the details of the shootings are still emerging, the broader context cannot be ignored. The shootings happened under the trauma of increasing violence against Asian Americans nationwide, fueled by white supremacy and systemic racism.”

Police in Atlanta and other major cities deplored the killings. Seattle’s mayor said “the violence in Atlanta was an act of hate,” and San Francisco police tweeted #StopAsianHate. The New York City Police counterterrorism unit said it was on alert for similar attacks.

Crisp County Sheriff Billy Hancock said in a video posted on Facebook that his deputies and state troopers were notified Tuesday night that a murder suspect out of north Georgia was headed their way. Deputies and troopers set up along the interstate and “made contact with the suspect,” he said.

A state trooper performed a PIT, or pursuit intervention technique, maneuver, “which caused the vehicle to spin out of control,” Hancock said. Long, of Woodstock, was then taken into custody “without incident.”

Crisp County sheriff’s spokeswoman Haley Wade said Wednesday morning that Long is no longer in their custody and that her office has turned over its information to the other Georgia agencies and the FBI.

Rita Barron, the store manager of a business neighboring the massage parlor that was targeted in Cherokee County, said that security footage of the parking lot outside the stores showed the gunman had been sitting outside in his car for about an hour just watching.

Nico Straughan, 21, who went to school with Long, described him as “super nice, super Christian, very quiet” and said that in high school Long brought a Bible to school every day and would walk around with it in his hands.

“He went from one of the nicest kids I ever knew in high school to being on the news yesterday,” Straughan said.

South Korea’s Foreign Ministry earlier said that its diplomats in Atlanta have confirmed with police that four of the victims who died were women of Korean descent. The ministry said its Consulate General in Atlanta is trying to confirm the nationality of the women.

U.S. Secretary of State Antony Blinken, who is in South Korea meeting with Foreign Minister Chung Eui-yong, mentioned the killings during an opening statement.

“We are horrified by this violence which has no place in America or anywhere,” he said.