CPS: Teachers Who Don’t Show Up Monday Will Be Deemed Absent Without Leave

As thousands of Chicago Public Schools students are set to return for in-person learning Monday, district leaders say teachers and staff who don't show up for work will be deemed absent without leave and won't be paid.

Despite pushback from the Chicago Teachers Union and others, Mayor Lori Lightfoot said the school district will push ahead with its reopening plan Monday. And though an increasing number of required employees have returned throughout the week, CPS CEO Janice Jackson revealed Friday what disciplinary measures will face those who stay home.

“Beginning Monday, when families send their children to school expecting to see their teachers, we know that a small portion of staff members may choose not to return,” Jackson said Friday. “Those individuals will be deemed absent without leave and they will not be eligible for pay going forward.”

In a conference call late Friday afternoon, Thad Goodchild, deputy general counsel for the Chicago Teachers Union, questioned the legality of withholding pay, particularly if staff log in remotely and are therefore not absent.

Thousands of pre-K and special education cluster program students are expected to arrive back at schools Monday for the first time since buildings were closed last March due to the COVID-19 pandemic. Students in grades K-8 who've opted to return will do so Feb. 1.

CPS and Lightfoot have framed this as an issue of equity, saying parents deserve the choice to send their kids back to school as many Black and Latino students have struggled with remote learning.

Jackson said the decision to punish employees who don’t show up is not taken lightly and can be avoided if employees do choose to return to their schools.

Teachers and staff taking part in the CTU’s conference call said they felt “bullied” by Jackson, and called it both “irresponsible” and “heartless” to send teachers, staff and students back into school at the same time the U.S. is setting daily records for COVID-19 deaths.

“Yesterday was the deadliest day of the pandemic yet, and we’re thinking it’s safe to go back in?” asked Lily Freyer, a third-grade teacher at LaSalle Language Academy.

Staff are fearful, for their students, for their own health and for their families’, said Shavon Coleman, a pre-K assistant at Lawndale Community Academy.

“If our bars, our restaurants aren’t open — where people don’t spend seven to eight hours a day — why is that you think it’s OK for us?” Coleman asked. “Who wants to teach on eggshells? The first time someone coughs or sneezes, you’re going to want to go home. We don’t feel safe in these buildings.”

Earlier this week, Jackson said less than half of teachers and just 60% of all employees who were expected to return to their school buildings Monday actually did so. That number has since increased to just over 65%, Jackson said Friday, driven largely by an increase in the number of teachers who have shown up. 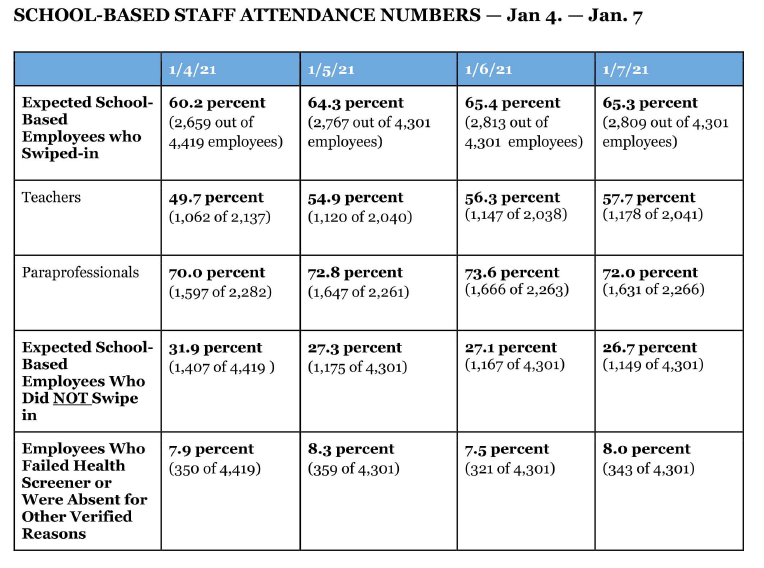 District data shows 1,178 teachers, or about 58% of those expected to return, did show up on Thursday. That’s up from the 49.7% who went to their schools Monday. The number of paraprofessionals arriving also increased throughout the week, from 70% up to 72% on Thursday.

Jackson said those employees who have gone to their schools did so despite “significant pressure” from CTU leadership, which she said has “openly encouraged” parents and students to remain outside of their classrooms “in defiance of actual public health guidance.”

Indeed, the CTU has strongly pushed back against the district’s reopening plan, saying it’s not yet safe to bring teachers and students back into schools due to the ongoing pandemic.

CPS said it has invested more than $100 million to ensure school buildings are safe for the impending reopening. That includes $42 million spent on additional emergency supplies like HEPA air filters installed in classrooms, multiple face coverings for students and staff, and additional stockpiles of soap and hand sanitizer.

But the union on Friday said employees who have shown up this week have been met with conditions that were “far below the standards and promises touted by Mayor Lori Lightfoot and Chicago Public Schools.” That includes reports of empty hand sanitizer dispensers, hallways filled with debris, brown water in bathroom sinks and a lack of available masks.

“I never heard our principal say, ‘I don’t know’ so many times,” said Coleman. “CPS has not kept them in the loop.”

“CPS and the mayor are saying that they desperately want to open schools, but in many buildings, they’ve done nothing to make conditions any safer — and that’s without the threat of a pandemic,” CTU President Jesse Sharkey said in a statement. “Parents, students, teachers, community groups and elected officials aren’t demanding that CPS and the mayor keep buildings closed; they’re demanding that they exhaust all resources in making schools as safe as possible before reopening.”

Jackson claimed the CTU has “moved the goal posts” with their demands, some of which she said “simply defy” guidance from public health experts.

The two sides have met more than 50 times, and bargaining will continue over the weekend, though CPS has made it clear an agreement with the CTU is not necessary in order to reopen schools.

“We will continue to meet regularly with them," Jackson said, "but we will only make progress if all parties come to the table focused on the only goal we should have, which is how do we see students return to school in as safe a manner as possible.”

Teachers countered that a safe return is also their goal — for students and staff — and that it’s CPS that’s been the stumbling block, not the union.

According to Goodchild, CTU has put a number of options on the table, including matching families that want in-person instruction with teachers and staff willing to provide it. Other requests, such as providing the type of testing that districts such as Los Angeles are implementing, have been ignored.

“We’re being told that children are not affected (by COVID-19),” said Diana Muhammad, a phys ed and dance teacher at Beasley Academic Center. And yet, Muhammad said, her own 5-year-old daughter was recently diagnosed with multisystem inflammatory syndrome, a serious pediatric disease associated with COVID-19. Muhammad says her daughter was entirely asymptomatic.

“We should take a step back,” Muhammad said. “We miss our students. But we're rushing back in fear.”