A Chicago Public Schools teacher took an early retirement to pursue his dream to continue in the long line of Mexican artists who excel at printmaking. From depicting calaveras – the skulls seen in the Day of the Dead celebration – to pursuing themes of social justice, Rene Arceo is the heir apparent to an enduring tradition.

“Chicago Tonight” has a portrait of a Chicagoan who has recommitted himself to his art.

Marc Vitali: When we visited his studio in pre-pandemic days he was working alone, but this artist has a talent for collaboration.

René Arceo, artist: I’m René Arceo. I’m a printmaker. I have a collaborative place, which is called Arceo Press where I publish prints with artists from not only across the U.S. but from different parts of the world. There’s somebody from Costa Rica, Puerto Rico, Spain, Canada, France. There (are) several South American artists that are living in the U.S. that have collaborated: some Venezuelan, Argentinian, Peruvian.

Vitali: From linocuts and silkscreens, to wood engravings and etchings – printmakers need a wide range of skillsets. We first learned about Chicago’s Arceo Press when the Bridgeport Art Center hosted an exhibit of work by René Arceo and the artists he works with. That show was called “The Border Crossed Us.”

Arceo grew up in a small town near Guadalajara. He told us the story of his own border crossing in 1979 when, as a 19-year-old, he left Mexico and came to the U.S. His family hired a coyote to guide him, his brother and a cousin. 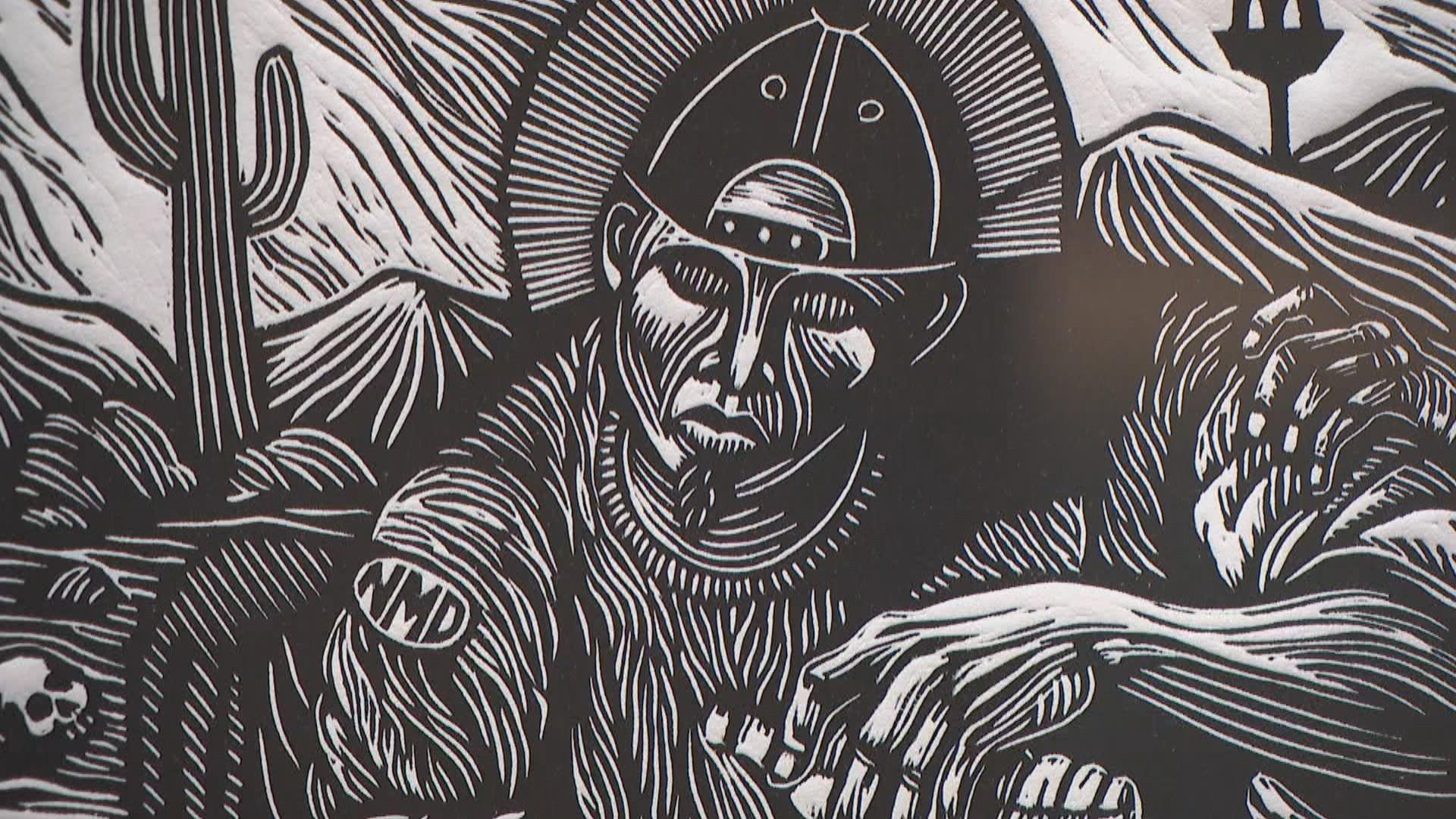 Arceo: Oh, I remember going through from Tijuana. There was a coyote that took a group of us in the middle of the night, probably around 2 or 3 o’clock in the morning. We crossed the border… We saw some of the helicopters flying overhead and down the hill we saw several groups that had been caught.

We just stayed put there for a few hours, I don’t remember how long, until there were no more helicopters flying around, and then a leader took us and we were walking I don’t know for how long, until sunrise practically. Then that afternoon they put us in a trunk of a car, a big car, I think there were 5 or 6 of us, and then took us out past a checkpoint and then from there we went to the outskirts of Los Angeles.

It’s something that is very common among many other immigrants that have gone through similar experiences, and also I see and realize how lucky I am in the sense that I didn’t suffer as far as many people who’ve died or nearly, so in that sense I feel lucky, and also that I have been able to make something of myself while coming to the states.

Vitali: René Arceo came to Chicago, married, and became a U.S. citizen. He studied at the School of the Art Institute and worked at what later became the National Museum of Mexican Art. And he taught at a Chicago elementary school for 20 years, through the beginning of the pandemic.

Arceo: We did do virtual teaching for a few months actually. It was a lot more difficult because most of the kids were not getting connected. A lot of them didn’t have devices, didn’t have access to the internet, so it was very difficult.

Vitali: For years, he’d been planning to retire and focus on his art. His work is part of the heritage of Mexican printmaking that started with the artist Jose Guadalupe Posada in the late 1800s – including works that feature calaveras. 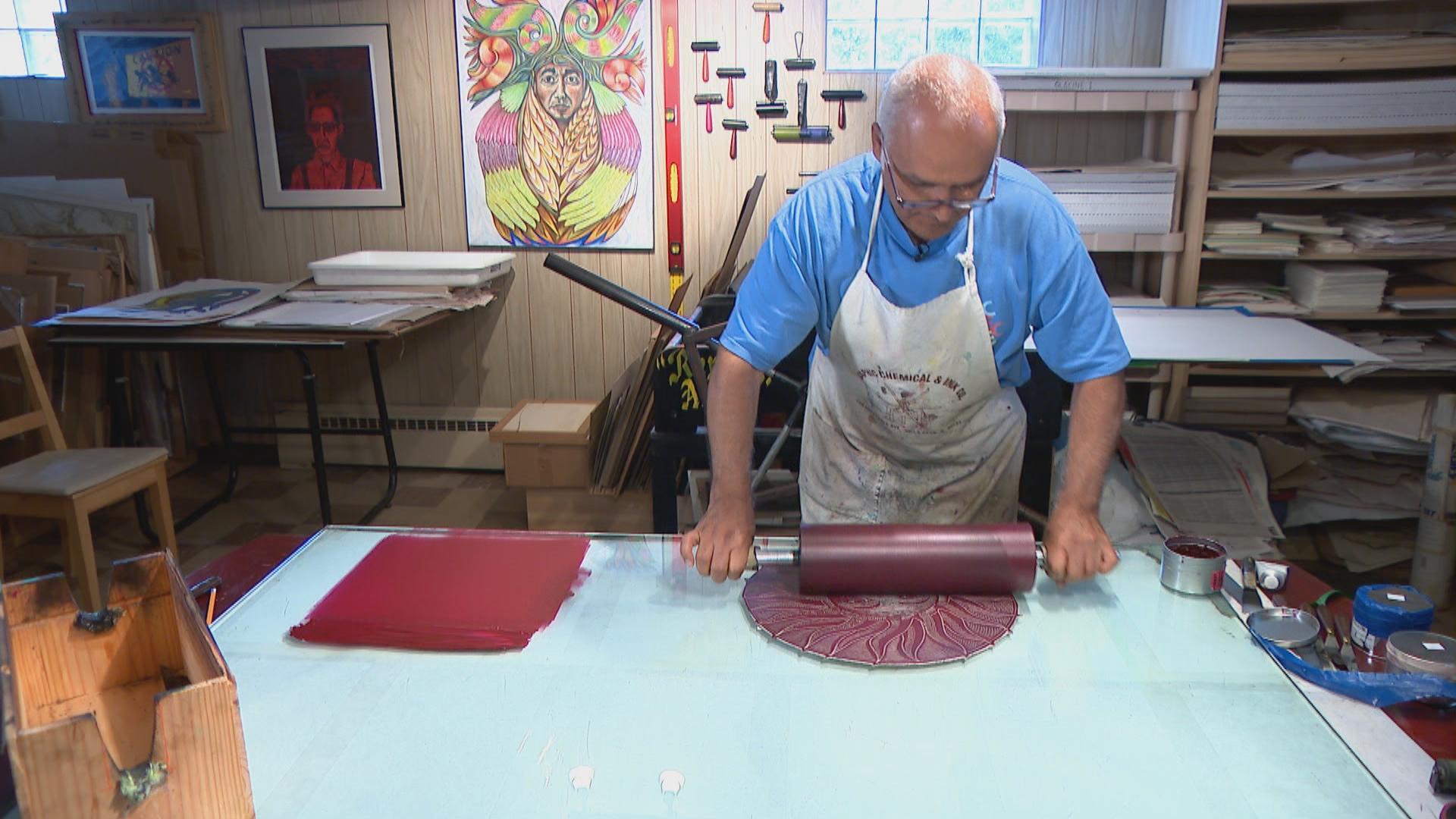 Arceo: And also the use of the skeletons that are doing a lot of different things. Not in the bloody, spooky way like Halloween, but they are doing regular activities as if they were alive because to us it is an extension of life and it is what remains of this body once we die.

Vitali: Arceo’s artistic output is very much alive. While his early works were more political, his latest artwork concentrates on people. One is a tribute to the first responders to COVID-19 – and includes a bat taking flight.

Arceo: I’ve been able to get my artwork out there. At the same time I continue to produce every day. Very happy to be able to do that. So essentially just getting ready until the pandemic is over till I can do more dispersing of my work through exhibitions and collaborations with other artists as well.

Arceo set up an Etsy shop to sell his original works, which sell for between $25 and $300.