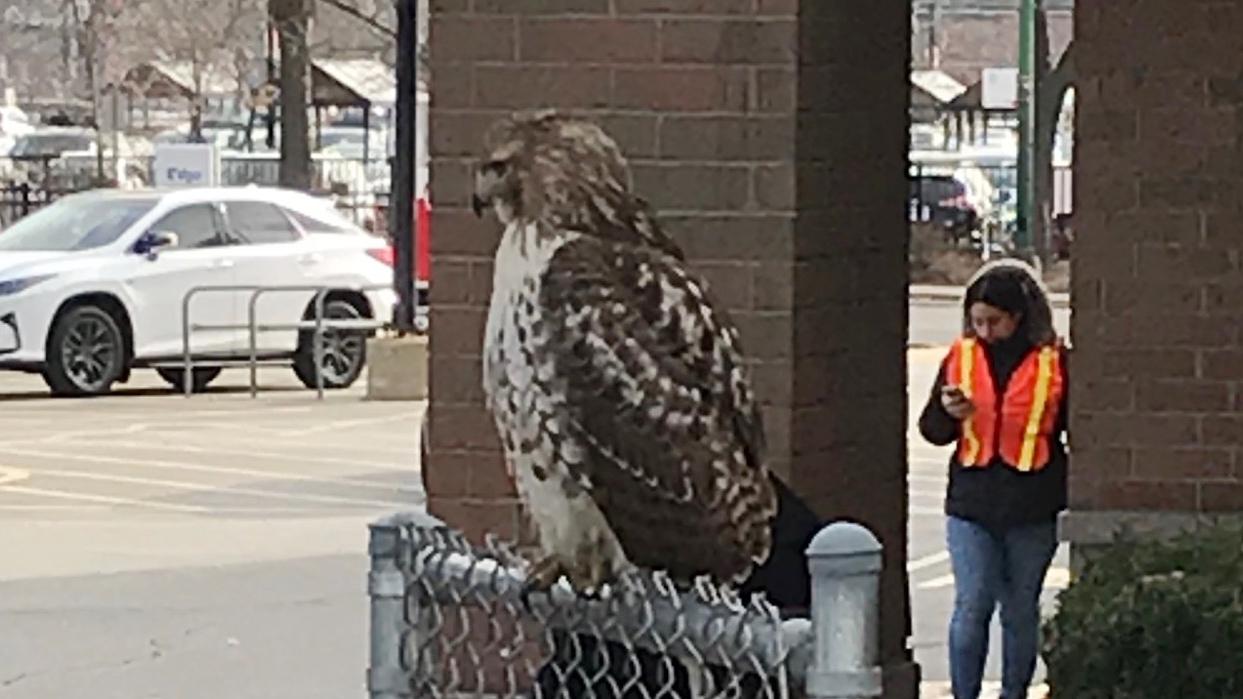 It’s that time of year when most people’s thoughts turn to turkey. But it was an unexpected appearance by an altogether different bird that had shoppers at the Roscoe Village Jewel-Osco whipping out their camera phones over the weekend.

The object of their fascination: A red-tailed hawk, seemingly oblivious to the commotion it was creating among customers. The raptor was stoically perched atop a chain-link fence separating the supermarket’s parking lot from neighboring Lane Tech College Prep.

Adam Sell, co-founder and site coordinator for the Fort Sheridan Hawkwatch in Lake Forest, identified the bird from photos provided to WTTW News.

Red-tailed hawks and Cooper’s hawks are two of the most common raptors found in the Chicago area, but the location was “bizarre,” said Sell, a board member of the Illinois Ornithological Society and guide with Red Hill Birding. “It’s not common for them to sit there that close. Just one of those lucky experiences.”

Red-tailed hawks have adapted to almost every habitat, from the forests of Canada and Alaska to desert climates, according to Sell. They can be found in almost every neighborhood park in the city, with some making their permanent home in Chicago and others migrating through.

“If you start paying attention to hawks, you notice them more,” he said. “Look up. They tend to soar.”

Even for a lifelong birder like Sell, a hawk sighting, especially such a close encounter, is never a ho-hum occasion.

“Everybody stops to see a raptor up close,” he said. “We don’t tend to see them often, and when we do, it’s usually a big deal. They’re very big — a hawk, they really stand out. And they’re beautiful. I think that’s the other thing: There’s kind of a majestic beauty to raptors.”

Sell surmised that the fence-sitting hawk spotted at Jewel was, like its fellow shoppers, in search of a meal, maybe a squirrel or a mouse. (Cooper’s hawks, by contrast, dine on other birds.) That would explain why the raptor stood its ground, even in the face of the iPhone paparazzi.

“If they’re really focused on their prey, they’re locked in and the rest of the world disappears,” Sell said.