In the comic book world there is the Marvel universe and the DC universe. Less well-known is the Ernest Hemingway universe. The writer, born in Oak Park in 1899, was a towering figure in 20th century literature, a witness to history and a popular figure in comics.

Over the years, comic book makers around the world have found inspiration in Papa Hemingway. We take a look at an unexpected topic: “Hemingway in Comics.”

Marc Vitali: He has a biography in a Mexican comic book, and a cameo with Topolino, the Italian Mickey Mouse. He even inspired a character in Superman.

Ernest Hemingway often shows up in comics. A new book collects samples from around the world and explores the topic in earnest. 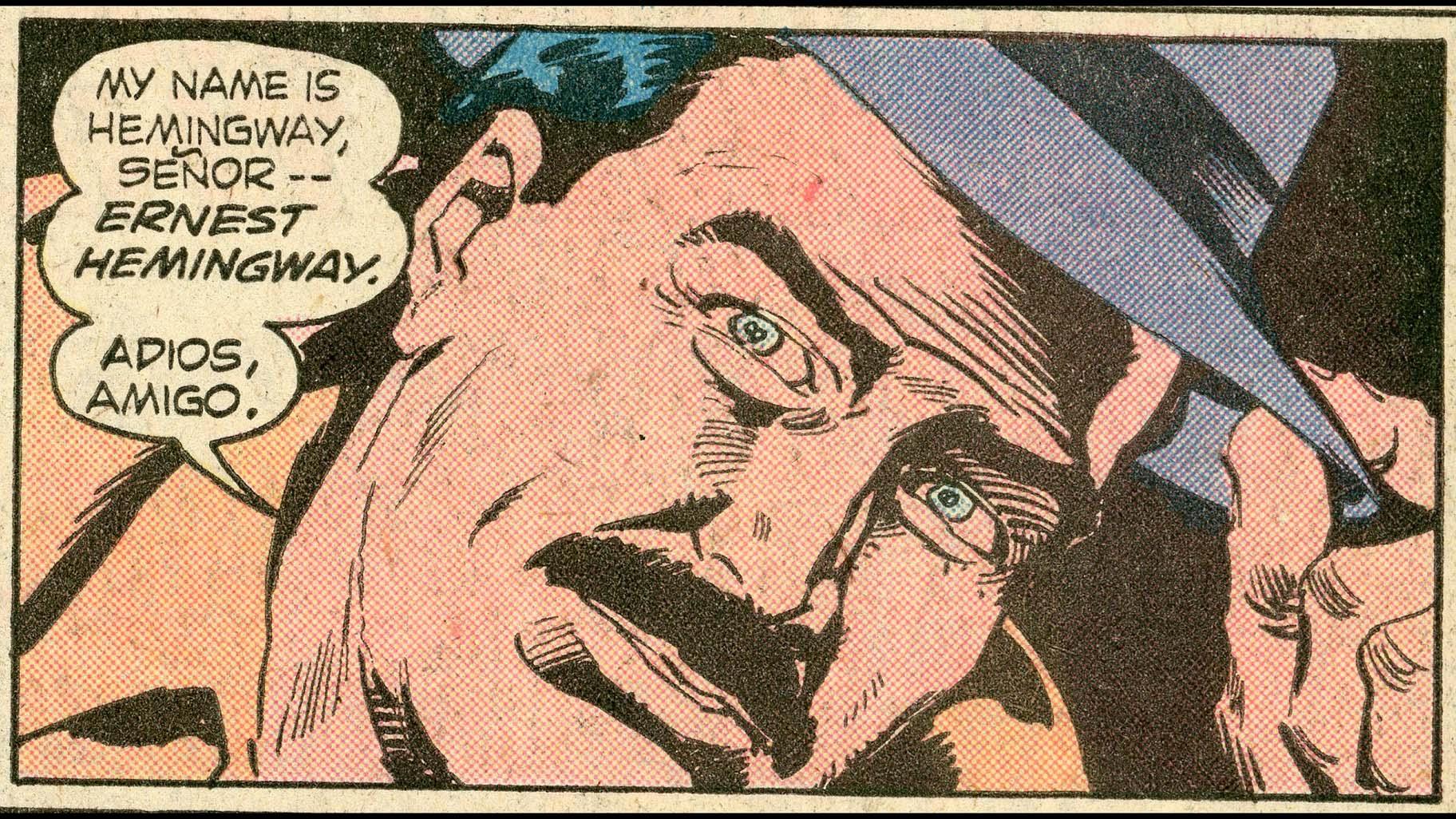 Robert K. Elder, author, “Hemingway in Comics”: “Hemingway in Comics” is this sort of journey to all the weird, wonderful ways that Hemingway shows up in comics, which you wouldn’t think would be a natural fit, but it is. So he’s appeared in Superman, in Wolverine, in Mickey Mouse comic books, sort of all over the spectrum, and in reverent ways and sometimes in irreverent ways, but it sort of talks about what happens when you become a symbol and you lose control of what that symbol means.

He’s an avatar for whoever’s writing about him and because he was in so many places he’s the perfect window to certain times in history.

Hemingway and comic book creators have this kinship because on the comic book page and on Hemingway’s pages there’s this need for an economy of words and brevity and action takes place between the panels and Hemingway asks, just from his style, that you bring yourself and interpret it.

Vitali: When he’s not writing books, Rob Elder works for the Bulletin of the Atomic Scientists. He wrote and compiled this book not far from Ernest Hemingway’s boyhood home in Oak Park.

It includes adaptations of some famous Hemingway short stories – like this one from a Hungarian crossword puzzle magazine. 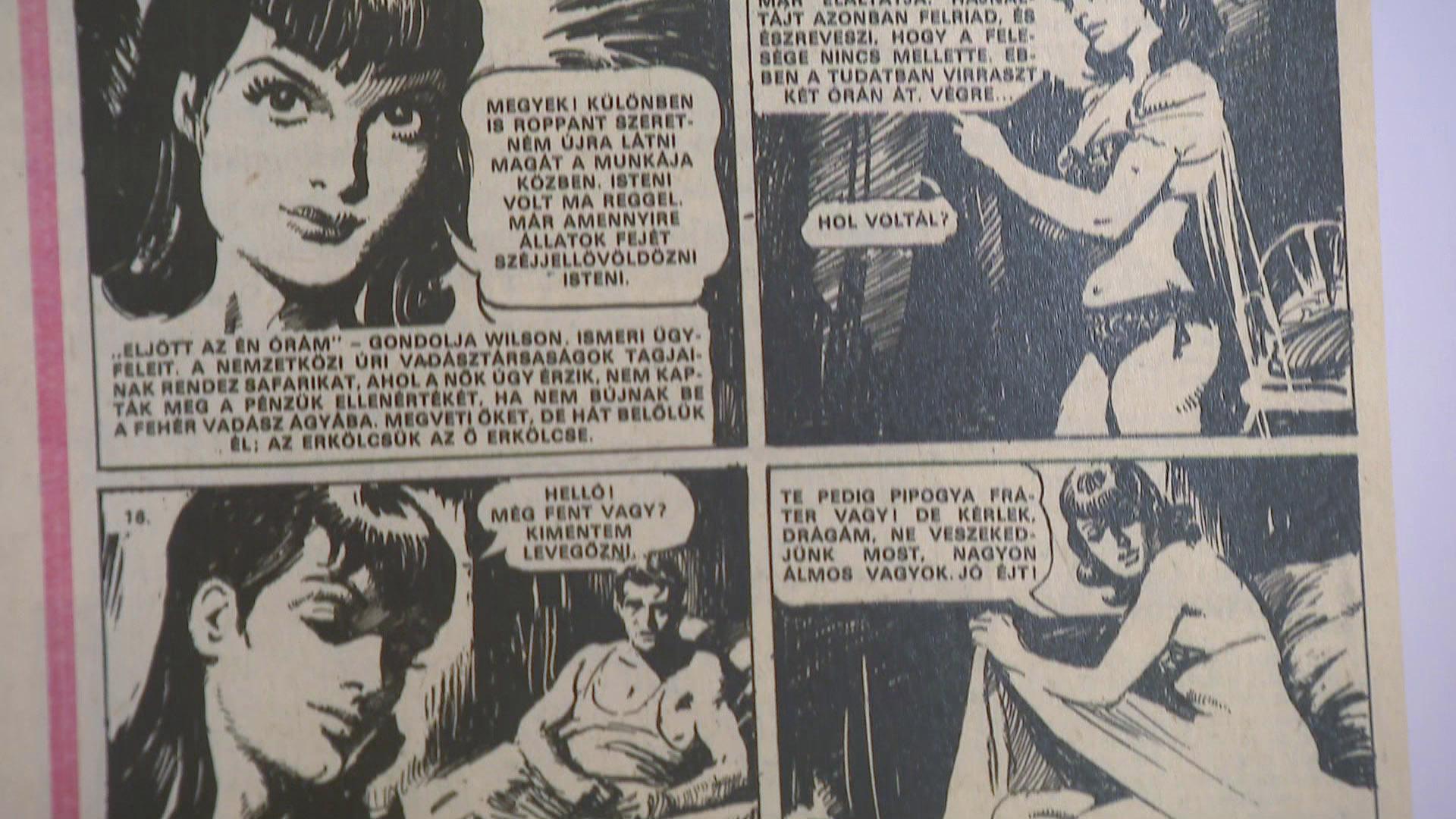 It also includes some unexpected takes on this most macho of authors.

Elder: Not only does it sort of run the gamut of comics – and you get adventure stories and you get sort of deep, philosophical stories, there’s also some really interesting sort of modern stories about Hemingway’s gender fluidity and you know for people who don’t know, from the early part of his life, he was raised as the twin, as the female twin of his older sister.

In “Peanuts” he shows up. Snoopy is compared unfavorably to him as a writer.

Italians in specific love Hemingway. He served in Italy as a volunteer ambulance driver so there’s great affinity for him.

There’s a book called “The Hemingway Triathlon” and it’s him later in his life coming to terms with his own mortality. And the triathlon is fighting, f**king and drinking.

Vitali: The author spoke with luminaries in the world of comics, including Garry Trudeau of “Doonesbury” fame and another Oak Parker, Chris Ware.

Elder: It really is a deep dive. It is from an academic press, but we wanted to bridge pop culture with a sort of well-researched academic theory and study, but mostly I just wanted to make it fun and accessible from a pop culture perspective.

And I hope I succeeded. I think it’s a lot of fun.

Ernest Hemingway is the most frequently seen author in comic books. Who are the second and third most visible authors in comics? Find out below in a short excerpt from “Hemingway in Comics.” 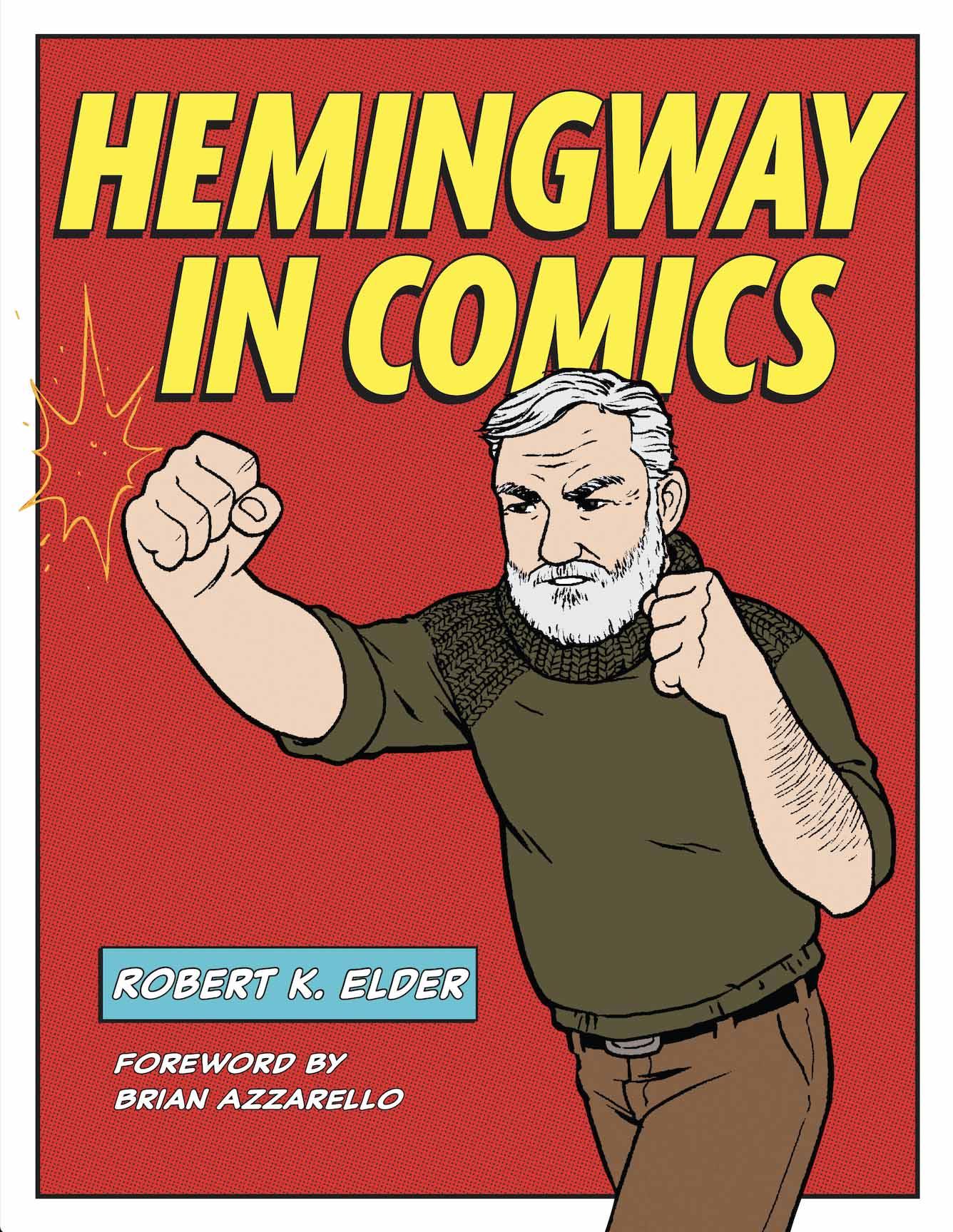 Celebrity appearances aren’t new to comic books. Both Stephen Colbert and President Barack Obama got guest shots with Spider-Man, and Eminem got a two-issues series with the Punisher. Orson Welles helped Superman foil a Martian invasion, and John F. Kennedy helped the Man of Steel keep his secret identity. Even David Letterman got a studio visit from the Avengers. But, using the crowd-sourced Comic Book Database (comicbookdb.com) and my own research, Ernest Hemingway by far exceeds all other appearances by authors (Shakespeare—22, Mark Twain—13). As historical figures go, only Abraham Lincoln comes close to touching Hemingway, with roughly 122 appearances in comics (and counting).

Hemingway casts a long shadow in literature that extends into comic books. In my first wave of research, I found Hemingway battling fascists alongside Wolverine, playing poker with Harlan Ellison and leading a revolution in Purgatory in The Life After. He has also appeared alongside Mickey Mouse, Captain Marvel, Cerebus, Lobo—even a Jazz Age Creeper. In comics, the Nobel Prize-winner is often treated with equal parts reverence, curiosity and parody.

In 2001, on the 50th anniversary of Hemingway’s death, Reed Johnson wrote about how the author’s images had been treated in pop culture. Writing for the Los Angeles Times, Johnson reflected on the “Hemingway caricature handed down to posterity: a hard-drinking, womanizing, big-game trophy-hunting, fame-craving blowhard who pushed his obsession about writing in a lean, mean prose style to the point of self-parody.”

Five decades after Hemingway’s death, Johnson observes “...there’s another, more serious and respectable Hemingway still duking it out with this comic imposter in the ring of public perception.”

That fight continues and is unlikely to be won anytime soon, because as author Tim O’Brien (The Things They Carried) has pointed out, there is more than one Ernest Hemingway. In the 120-plus appearances I found across the globe, Hemingway is often the hyper-masculine legend of Papa: bearded, boozed-up and ready to throw a punch. Just as often, comic book creators see past the bravado, to the sensitive artist looking for validation.

This book endeavors to explore these Hemingway appearances from the divine to the ridiculous.